Marx & Philosophy Review of BooksReviews‘English Radicalism in the Twentieth Century: A Distinctive Politics?’ by Richard Taylor reviewed by Tom Steele 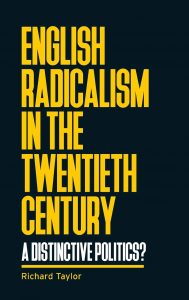 Is it possible to identify a distinctive politics of ‘English’ radicalism in the twentieth century? In this engaging new book by Richard Taylor, the dominant themes of this radicalism are, on the side of the individual citizen, freedom of thought, speech, assembly and personal lifestyle and on the social plane, political and economic equality. These values have been buttressed by a belief in the agency, if not always goodness, of the ‘common people’ and the commitment to creating and developing an informed participative and tolerant democracy. Complementary to this project is that of creating a mass popular but critical education for a politically involved and literate society.

A further distinctively English element, Taylor claims, is a belief in social movements and popular mobilization as an essential element in the struggle for radical change. In the twentieth century, these have included movements for peace, feminism, anti-colonialism, anti-racialism, civil rights and environmentalism. Moreover, for Taylor, English radicalism is embedded less in Marxism and revolutionary theory than in nonconformist moralism. Most of the figures studied in the book certainly fit this picture but Taylor also wishes to maintain they are all ‘in their various ways ideologically “English” in their cultural perspective’, which we will consider later.

The book is a vivid celebration of ten English twentieth century radicals and their causes, offering many rewarding insights into their lives and politics, family and educational backgrounds, achievements and failures. As such it’s a Strachey-like ‘Eminent Victorians’ for the modern age, tracing biographical peculiarities, idiocentric quirks and ideological breaks, alongside historical chains of tradition and networks of influence, which Taylor manages elegantly to condense into a highly readable and cohesive narrative.

The figures discussed are, in order, Bertrand Russell, Sylvia Pankhurst, Ellen Wilkinson, George Orwell, E. P. Thompson, Michael Foot, Joan Maynard, Stuart Hall, Tony Benn and Nicolas Walter. Taylor highlights the common threads and signal disagreements among them – the fallout between Foot and Benn is especially revealing. While Russell, Orwell, Thompson, Foot and Benn are obvious candidates, the inclusion of Pankhurst, Wilkinson and especially Maynard offer a refreshing break from the usual male pantheon. Hall is the only non-white to be included, but there are no Jewish or Asian radicals in this list. Only Wilkinson and Maynard are working-class exceptions to the privileged, largely privately-educated men born in the south of England. While Pankhurst, although a Mancunian, was also from a well-established bourgeois family, Hall was from a middle-class Jamaican family, who won a scholarship to Oxford.

Often, these radicals came from staunch Victorian Liberal families with strong Methodist and non-conformist views and Taylor deftly charts the historical transition of a substantial element of the English radical tradition from the J.S. Mill liberalism of the mid-nineteenth century to the Labour socialism of the early twentieth. Bertrand Russell’s grandfather was twice a Liberal Prime Minister (1846-1852 and 1865-1866), while Michael Foot, in mid-stream, was even President of the Oxford University Liberal Club.

Wilkinson, Foot, Maynard and Benn were directly involved in parliamentary politics, through membership of the Labour Party and all except Maynard, held Ministerial briefs. Others were identified more closely with social movements to which they made huge commitments – Pankhurst to the struggles of working-class women and anti-colonialism, especially Ethiopia, Russell, Thompson and Walter to the peace movement and civil rights and Hall to anti-racialism and anti-colonialism.

Despite his admiration for Aneurin Bevan, the Etonian, Orwell was only ever a reluctant member of the Labour Party and famously incandescent about left-wing intellectuals. He is largely known as an inspirational campaigning journalist, novelist and essayist as well as for his courageous participation on the Republican side in the Spanish Civil War. Orwell’s writing was for Taylor his massive strength and his analysis of working class and popular culture a significant influence on one the founders of British Culture Studies, Richard Hoggart. Taylor sees him as the embodiment of the English radical tradition.

As Taylor argues, unlike European radicalism, there is no great tradition of British theoretical analysis. Yet many here made important contributions. The philosopher, Russell, was concerned to reconcile equality with the Enlightenment values, highlighting the dangers posed by the Fabian ‘Big State’ and tried to establish a progressive patriotic ‘love of England’ over jingoistic nationalism. Walter brought the strengths of anarchist libertarianism to the analysis. Most here were suspicious of the deterministic ‘base and superstructure’ model of Soviet Marxism but found the early Marx congenial. Hall was to mount a major critique of conventional Marxist class analysis by revealing the complexities of social class and the way it could eclipse minority ethnic and feminist identities. The only academic historian in the group, Thompson was arguably the first to identify the idiom of the ‘the freeborn Englishman’ and chart the growth of English ‘plebian’ radicalism through Paine and the English Jacobins to the Chartists.

Some had a youthful adhesion to the Soviet Revolution and the British Communist Party (CP) of which Pankhurst and Wilkinson were actually founder members and neither lost the habit of class analysis and the belief in the working-class ‘cause’. Maynard, as Taylor notes, was close in many respects to the CP and displayed a bold Soviet era poster of Lenin above the living room fireplace of Lansbury House, her home in Thirsk, but she was never a Marxist as such. Unlike Wilkinson, she was not wholly in tune with Labour Party parliamentarianism either and endorsed the strictures made by Ralph Miliband in Parliamentary Socialism A Study in the Politics of Labour (1964,) a book she first came across in WEA classes. She was constantly part of the awkward squad and her support for Troops Out of Ireland (along with Corbyn and Flannery) and voting against the Prevention of Terrorism Act brought predictable howls of execration from the Tory Press. But perhaps her peculiar gift to the left was her principled fight for rural and environmental issues, long before they became popular.

Thompson was, by contrast, a very active member of the Communist Party until 1956 but by the end of his life, Taylor notes, had moved on substantially from a Marxist perspective. He was never in any case ever persuaded by official Soviet Marxism-Leninism and with John Saville and others in their oppositionist party journal The Reasoner, (and subsequently The New Reasoner) turned increasingly towards cultural analysis and what he called ‘socialist humanism’. At this time William Morris was his beacon of English radicalism. He became a pillar of the ‘old’ New Left but fell out dramatically with the young Turks of New Left Review, a journal he had helped to found. The younger Hall embraced Thompson’s socialist humanism and cultural turn but had different arguments with Marxism. Utilising Gramscian, Althusserian and eventually feminist theory he developed what Taylor calls a ‘more fluid, responsive ethos’ on the English left, centring on the restructuring of social class, the collapse of the Soviet Union and the decline of the European ‘old’ left. Some like Miliband père feared this actually contributed to the demobilization of the left in Britain.

While thoroughly enjoyable, and learning from Taylor’s stylish lives, which are very much the substantive part of the book, I was left wondering what was distinctively ‘English’ about the politics. How much did the radical politics he is investigating draw from or differ from, Welsh, Scottish or Irish radicalisms? Two of Foot’s three self-confessed political heroes, were for example, the Scot Keir Hardie and the Welshman Aneurin Bevan. Could we talk about a ‘British’ radical tradition distinguished by family resemblances?

More broadly, the struggle for freedoms and the various forms of equality are common to all the European post-Enlightenment radical traditions and most of the figures considered here identified with aspects of this culture. All European radical traditions have also witnessed formidable social movements, but perhaps the difference is that these have often been more assertively nationalist than in England. This may also be the case with Scottish, Irish and Welsh radicalism in their struggles against, in fact, the English. Eric Hobsbawm went as far as to say that nations owed their existence to nationalists. A peculiarity of the English, as Tom Nairn has long pointed out, is that they never hitched their radicalism to an insurgent nationalism which promised freedom from a dominant power (except, ironically and falsely, the European Union) and that may be distinctive.

Stuart Hall often puzzled over the question of Englishness and in one of his later articles reflected: ‘I do think Englishness is something we need to talk about, but it’s contested terrain that is structured powerfully against a contemporary radical appropriation’ (The New Statesman, 23 August, 2012). Why is it that the deeply reactionary versions of Englishness constructed by Margaret Thatcher, Enoch Powell and others easily prevailed over anything the left had to offer? So, as Ukania starts to fragment into its older national elements under the pressures of Brexit, can we construct an oppositional ‘patriotic’ Englishness from the radicalism outlined here? The process is tentatively outlined in the last chapter but invites fleshing out in a subsequent volume from Taylor. This book’s great strength lies in its detailed and soberly illuminating portraits of ten radicals who have made signal differences to the way we think about progressive politics in this country, and how we might change it for the better.