Marx & Philosophy Review of BooksReviews‘Emergency Powers in Theory and Practice: The Long Shadow of Carl Schmitt’ by Michael Head reviewed by Jermaine Young 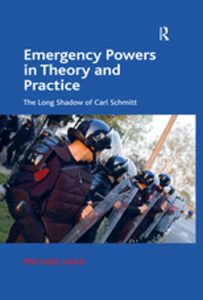 Jermaine Young is studying for a PhD at Florida International University in Miami. He is currently …

Emergency powers have been, and still are, the rule instead of the exception for Western liberal democracies. Michael Head’s Emergency Powers in Theory and Practice: The Long Shadow of Carl Schmitt continues this thesis by tracing past and present histories about the abuses of such powers within English-influenced legal systems, mainly those of Australia, the United States and United Kingdom. However, he separates himself from other juridico-political analyses of emergency powers by examining their inherent socio-economic class character as a key, but often neglected characteristic, for their prolonged development and deployment throughout the world. In this sense, Head’s volume is quite critical of several mainstream working theoretical assumptions about emergency powers such as the historical nature of such institutions, temporary-permanence debate, the democratic credentials of the West, and the state’s neutrality in resolving crises. Therefore, he seeks to develop a more critical and nuanced historical, legal and political description of emergency powers.

The author notes that the use of emergency powers in the contemporary are on the rise in terms of frequency and variety of situations inclusive of natural disasters, terrorism, financial crises, inter alia. These have all led to declarations of emergencies by numerous governments. Thus, he arrives at a Benjaminian conclusion in which emergency powers are the norm instead of the exception. Head’s historical approach sees him critiquing classical institutions of emergency rule which have tended to elide socio-economic contexts for their deployment. For example, numerous analyses of the Roman Dictatorship, French State of Siege, British martial law and Article 48 of the Weimar Republic are often ahistorical by neglecting the class-based aspects that created and sustained uses of such suppressive powers. That point however was not lost on Marx who saw the state of siege for what it was, a violent bourgeois instrument for subduing the Second Republic’s June Days labor uprisings of 1848, as he articulates in the 18th Brumaire of Louis Bonaparte. Similarly, Head notes that throughout history emergency rule has been used by the ruling class to crush servile revolts in Rome and working-class and socialist discontent in both the U.K. and Weimar Germany respectively.

Notions of necessity are often employed for justifying resort to emergency powers. For example, common law systems support the use of martial law to restore the status quo. In this sense, British colonialism sees the rule of law being discarded in favor of martial law as a necessary tool in governing subjects of Empire. Such accounts have been documented in the oppressive and often fatal treatment of populaces in places such as Ceylon, India, Ireland and the West Indies, primarily the Jamaica Affair of 1865. Such historical actions lead Head to critique supposed Western liberal democratic commitments towards the rule of law and legality given the fact that past and present governments have used Acts of Indemnity to justify past illegalities in the name of necessity. Furthermore, he notes that presently we are in a state of ‘official lawlessness’ as it concerns the indeterminate and never-ending War on Terror which has seen a rise in unlawful surveillances, extraordinary renditions, coups, assassinations and torture being the modus operandi for the West in this supposed crisis.

Over the years, a number of legal doctrines and political thoughts have influenced and developed the proliferation of emergency rule that we are seeing in the twenty-first century. For Head, the invocation and rehabilitation of the would-be ‘Crown Jurist’ of the Third Reich, Carl Schmitt, takes us down this dangerous dictatorial path as Germany experienced with Hitler. For example, he notes that the overt reliance of Schmitt’s ‘state of exception’ doctrine combined with notions of necessity within Anglo-derived legal systems ‘underscores one of the central theses of this book – that every capitalist constitution, no matter how formally liberal and democratic, contains within it the capacity to authorize dictatorial rule in the name of saving the existing order from domestic threats, as well as external ones’ (115). Essentially for the author, Schmitt’s continued relevance in both academic and practical governance matters provide the West with authoritarian powers to suppress socio-economic uprisings that threaten the capitalist ruling class and status quo. However, he notes that the West also has its own juridico-political problems whereby the flaws of the rule of law doctrine, as espoused by A.V. Dicey, are constantly contravened by governments using notions of necessity thus instead ruling by law.

While a number of theoretical perspectives and critiques have been used to study emergency powers, there has been little put forward by Marxists in the contemporary. Head puts forwards an invaluable contribution about such powers from this perspective whereby the West’s growing reliance and resort to use such inherently violent measures ‘points to the fact that the capitalist state is an instrument of class rule’ (143). He further adds: ‘For Marxists, therefore, the analysis of emergency powers cannot be separated from an examination of the socio-economic and class character of the state and government exercising the powers’ (Ibid). Therefore, capitalism and dictatorial powers go hand-in-hand to maintain the status quo of wealthy capitalist elites at the detriment of the masses. Head, using Marx and Engels, reminds us that law arises out of the relations of production and consciousness attached to it and that said relations are dynamic and can eventually lead to revolution. Finally, he notes that law is also an ideological form with an inherent class conflict that is found within the political superstructure and thus notions of legality are determined by materialism and not abstract idealism. Thus, those with state power will fashion the legal code to preserve and protect their interests.

After evaluating the legal and theoretical background of emergency powers, Head uses the three aforementioned case studies to emphasize the growing use of claims of emergency for governing in common law systems. Britain plays a fundamental role in the construction and expression of modern understandings of emergency powers via both statutory and non-statutory sources. Head critically reminds us that while the Civil Contingencies Act 2004 has constitutionalized some exceptional powers, it still provides the Crown with substantial royal prerogative for deploying the military and declaring martial law as it sees fit. He therefore argues that this violates centuries’ struggles for parliamentary and civilian control over the monarchy and such ‘power is incompatible with genuine democracy’ (171). Turning to the U.S., Head highlights the expansion and resort to executive/presidential power in which both the legislature and judiciary have played a largely deferential role. Throughout various presidencies, from Lincoln to Obama, there has been a tendency for using unilateral emergency powers ‘while seeking to maintain the appearance of a rule of law’ (180). In this sense the author notes that royal prerogative has been transformed into an executive/presidential power variant combined with the adoption of more Schmittian notions of executive authority in which, ‘[t]he sovereign is he who decides on the exception’ (Schmitt 2005: 1). Head notes that Australia’s emergency powers conundrum patterns those of the US as it relates to the elastic and vague nature of such powers and who can wield them, whether federal or state authorities with the former increasingly leading in this arena. Furthermore, the country also retains royal prerogative by way of the Queen’s representative, the Governor-General. In 1975 the Governor General at the time, Sir John Kerr, removed the democratically elected Whitlam government by invoking such authoritarian powers, Head notes. Overall, in all three aforementioned cases there have been increased complications, constitutionalization and expansion of extraordinary powers in response to a series of crises (real or imagined) spanning the twentieth and twenty-first centuries.

Head’s scholarly work is quite timely given the frequency of declarations of emergencies by both Western and non-Western governments. His efforts to include a Marxist analysis of historical modes of emergency rule are extremely useful in dissecting the historical foundations of such state devices. They aid in revealing the bourgeois class-character of the state machinery and the lengths at which it will go to preserve the liberal democracy and capitalism. This is in stark opposition to Schmitt’s earlier stinging critique of liberalism’s ineptitude for saving itself when confronted by and threatened by enemies in both The Concept of the Political and The Crisis of Parliamentary Democracy. Overall, the author’s work somewhat parallels William Scheuermann’s scholarship on the development and declaration of economic states of emergencies (SOE’s).

Nonetheless, the author misses the mark a bit in trying to make the connection between Schmitt and the growing use of emergency provisions across the world. For example, while Schmitt’s juridico-political thoughts have been incorporated within the development of a unilateral American presidency, the author doesn’t provide much textual or practical examples in the case studies of Australia and the U.K. to trace and locate such a connection. In this sense, it seems that more of the blame can be attributed to royal prerogative and its inherent authoritarian traits. While the author delimited his study to primarily English-derived common law systems, the incorporation of post-colonial societies as case studies from either Africa, Asia or the Caribbean would have broadened the theoretical and practical understandings of emergency powers whereby a more blurred picture begins to emerge about the role of Schmitt in such places. Finally, the case of the U.K. provides a detailed overview of the past and current context of emergency powers, but it fails to show any sort of legal violations which have arisen in the contemporary due to such legislations and powers being implemented against the population in any targeted manner (racially, sexually or socio-economically). Despite these minor shortcomings, Head’s effort is surely guaranteed to provide students and scholars of emergency powers as well as laypeople some serious issues to contemplate and disentangle in order to develop a state that is fundamentally for the people and by the people.