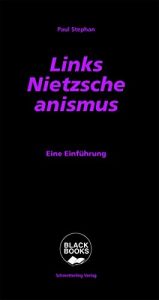 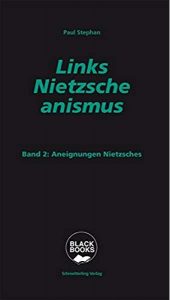 Paul Stephan’s Links–Nietzscheanismus [Left–Nietzscheanism] attempts a mutually corrective mediation between anarchism and Marxism with the help of an explicitly political reading of Nietzsche. As such, it also brings together Marx with Nietzsche – or Marx’s critique of capitalism with Nietzsche’s critique of the belief in the productive forces and their progress, in the instrumental reason of the sci-tech-economic complex, and in the vitalist utilitarianism of (alienated) labour. By bringing together Nietzsche with Marx in this manner, Stephan reminds us that Left-Nietzscheanism and postmodernism do not have to – and in fact cannot – be the same, since the left, today, needs to transcend both, localist populism and globalist neoliberalism.

As a highly accessible introduction, Stephan’s first volume (I) presents the leftist potential of the phenomenon Nietzsche beyond its postmodern appropriations. The well-researched second volume (II) delves into the ambivalent political reception history of Nietzsche especially in Germany and France. The biographical and the historical contextualisation of the two volumes as well as their clear, explicit, often polemical and always pleasantly non-academic style, open the books to a wider public. Hence, even if one does not agree with all of Stephan’s sometimes strong evaluations – even if some analysis gets lost in generalisation – Links–Nietzscheanismus remains faithful to Nietzsche’s own declaration for a free spirit.

Yet, Nietzsche himself was – as Stephan makes clear (II, 141) – not as untimely as he himself claimed to be: social Darwinism, eugenic vitalism, natural scientism, virile mysogyny and the fetishisation of strength were not only part of Nietzsche’s spirit but were, first and foremost, the spirit of the day. On the other hand, with the dash (‘–’) instead of the hyphen (‘-’) between Links– and Nietzscheanismus, already the title chosen by Stephan accentuates that the person Nietzsche was at a certain distance from the one-dimensional appropriation of either left or right – although both can find almost whatever they want in the Nietzschean ‘quarry’. Putting the stress more on Nietzsche’s anti-system methodology than on his positive concepts – such as the ‘will to power’, the ‘superhuman’ and the ‘eternal return’ – the first volume of Links–Nietzscheanismus outlines and successfully defends mainly Nietzsche’s epistemological critique (I, 59 ff.). Crucially, Stephan explains this critique – kin to the enlightenment: following from an atheist anti-metaphysics – as entailing the critique of what Walter Benjamin has called ‘capitalism as religion’. For sure, this is one of the most noteworthy arguments Stephan indicates (I, 70). To underline the importance of a critique of metaphysics, religion and ideology especially for capitalism as a metaphysical, religious or ideological formation is perhaps the central task Left-Nietzscheanism can accomplish for anti-capitalist endeavors. Although Stephan’s introduction does not develop this argument in detail, it points it out prominently – which is to be counted as an important contribution to contemporary critical theory.

In the second volume, Stephan follows the trace Nietzsche ‘left in the left’ not only in the Frankfurt School (II, 272-314) and in poststructuralism (II, 375-479) but also in early twentieth century anarchism, Lebensreform and Jugendstil (II, 9-108); as well as in the establishment of psychoanalysis and German sociology (II, 237-269). Despite the attempt of exposing rather than hiding the contradictions between the leftist and the rightist Nietzsche, however, the way this trace is followed sometimes seems over-benevolent regarding Nietzsche’s own ‘leftist’ intentions. For example, when Nietzsche preaches war, this is immediately supposed to be meant only metaphorically (II, 118), whereas his affirmation of body and earth is taken to be sufficient to make him even a ‘pioneer [Vordenker] of feminism’ (II, 23 ff.). Similar to the latter, Adorno is treated as an ‘orthodox Nietzschean’ (II, 292 ff.) due to his non-identitarian ethics – although he was at least as much a Hegelian Marxist (with a Kierkegaardian twist).

Indeed, Stephan’s sometimes over-benevolent reading of Nietzsche goes hand in hand with his mostly deprecatory reading of Hegelian Marxism. That reading reduces Hegelian Marxism to an orthodox if not authoritarian statism with a party vanguardism set inside the construction of linear History as progress (II, 46, 230). Against this reduction, it can be argued that it is less Adorno’s Nietzscheanism than his Hegelian Marxism which allows him to uncompromisingly criticise his favourite subjects: positivism, reification, technocracy and the culture industry. However this may be, the issue excavates a general problem for the project of Left-Nietzscheanism. For sure, criticising the state, including its Keynesian transformations, may not be too hard for any Nietzschean. Problematising the ‘spontaneous orders’ (Friedrich von Hayek), ‘creative destructions’ (Joseph Schumpeter) and ‘dynamic stabilisations’ (Hartmut Rosa) of so-called free markets and their deregulated transnational flows of Dionysian capital, however, will quickly prove more difficult from a Nietzschean perspective and perspectivism. Put differently: anarcho-capitalism easily becomes a blind spot for leftists under-informed by Marx’s profound economic analyses. If anything, then, the aim should be to bring (Hegel-)Marx into a critical dialogue with (Stirner-) Nietzsche, instead of replacing one by the other. Fortunately, this is exactly what Stephan’s introduction intends.

Realising that intention, Stephan still resists to omit the politically most alarming aspects of ‘Nazi-Nietzsche’ (II, 325) – which span from the biologist breeding fantasies of a master race to the elitist resentment vis-a-vis democracy and socialism (as well as, actually, vis-a-vis anarchism and feminism). As Stephan cogently argues, to carve out the leftist potential of Nietzsche, one also needs to know – and criticise – the rightist content of his work. Even more, Left–Nietzscheanismus scrutinises late Nietzsche’s function for (neo)fascism and national ‘socialism’ to warn against a too easy identification of anti-conservatism with left-wing politics (II, 145). In fact, Stephan shows that this identification is to be found both in the so-called ‘conservative revolution’ of Spengler, Jünger and Heidegger and in those who once were called the neo-conservatives by Jürgen Habermas (II, 415). As a result, to warn against the simplified identification of anti-conservatism with left-wing politics is significant also against the reduction of Nietzsche to postmodernism.

In the postmodern reading of Nietzsche, the death of God results in the death of the subject and of the human(e), in the agony of history and the end of utopia. Stephan demonstrates how this postmodernist appropriation completely misses Nietzsche’s individualist vote for the heretically authentic living creature against and beyond the quantifications of exchange value. As an alternative to the postmodern reading, Stephan makes strong the respective Frankfurt School, Existentialist and Situationist Left-Nietzscheanism (II, 357). Here resides another of Stephan’s most persuasive arguments. Despite Foucault, Deleuze and Derrida’s claims, Nietzsche’s ‘super-humanism’ [Übermenschentum] is rather the opposite of an anti-, post- or transhumanism (II, 438 ff.). Nietzsche, after all, is a fierce critic of nihilism as the disease of capitalist modernity – instead of being an excited apologist for ‘happy nihilism’ (II, 344). Similarly, Nietzsche is less a spokesperson for cynical anti-moralism than one for an ethics of self-becoming (I, 72 ff.). Indeed, this brings to the fore Marx and Nietzsche’s shared heritage of early German romanticism – with its hopes for self-realisation on a scale not diminished by liberalist atomisation.

Via this path, Nietzsche’s aristocratic fantasy could come closer to Marx’s democratised concrete utopia of an end of (alienated) labour. The other way around, Nietzsche’s critique of the state, of blind collectivism and of party politics can strengthen the Marxian project of an association of free humans, which needs the withering away of the state. Moreover, Nietzsche’s critique of scientism can be helpful against the fallacies of a narrowly conceived ‘scientific socialism’; his stress on body and earth can be used to develop the formerly often overlooked ecological aspect of the history-nature-metabolism; and his this-worldly anti-philosophy can be reconstructed – beyond the false dualisms of rationalism – as a dialectics of rationality with allegedly non-rational forces. In this Marxian-Nietzschean way, autonomy and authenticity could be reconciled without any waiver of drive on the one hand, and without any irrationalism on the other (I, 119). Consequently, Stephan’s Left-Nietzscheanism contains both, a solidary individualism beyond its neoliberal form, and a materialism of resistant bodies [Leiber] – including the ecological consciousness of a finite earth. Along these lines, Stephan votes against today’s culturalist-reformist dead-ends, and for a rehabilitation of the social question that brings together political passion with political reason. In short, he votes against utopophobia and for a concept of power as collective self-determination. The actual affirmation of life, in this picture, is not the immanentist apology of a deadly status quo, but the critique of and the struggle against the grave resentments of fatalism.

Of course, there are rightful critiques of Nietzschean anarcho-capitalism – articulated, for example, by Manfredo Tafuri, Jan Rehmann and Detlef Hartmann. Although Stephan does not discuss these critiques at length (if at all), his introduction opens the horizon for a convincing Left-Nietzscheanism as a clear alternative to leftist accelerationism in both of its forms: productivist-technocratic Marxism and consumerist-transhuman postmodernism. Stephan opens that horizon by showing that universalism, anti-metaphysics and the political can and must be thought together. This is because after the death of God, what needs justification is less universalism than particularism (II, 227) – since no transcendental chauvinism is left to give metaphysical arguments for political superiority. The Luxemburgian result of this view is a ‘universalism not of levelling down [Gleichmacherei] but of the equality [Gleichheit] of those different’ (I, 113). All in all, then, Stephan’s introduction is more than an introduction. It emancipates Left-Nietzscheanism from happy nihilism and thus makes possible to rethink the Nietzschean critique of nihilism in combination with the Marxian critique of capitalism as religion. This rethinking could create a new field of research into the Marxism-anarchism-nexus – and a new field for leftist critique more generally.