Marx & Philosophy Review of BooksReviews‘Jazz and Justice: Racism and the Political Economy of the Music’ by Gerald Horne reviewed by Thomas Carmichael 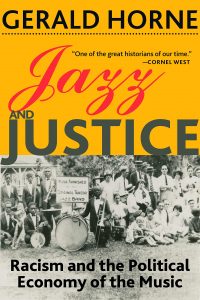 Gerald Horne
Jazz and Justice: Racism and the Political Economy of the Music

Near the close of his panoramic and richly researched Jazz and Justice, Gerald Horne points to Adorno’s characteristically modernist assertion that the most an artist can accomplish, faced with the contradiction of enchained art in an enchained society, is to realize that contradiction through emancipated art, although the attempt is most often only a recipe for despair (337). In the spirit of Adorno’s observation, Horne’s book is a chronicle of the course of individual and collective material struggles in the practice of jazz, or as he puts it, ‘[t]his is a book about the travails and triumphs of […] talented musicians as they sought to make a living, at home and abroad, through dint of organizing–and fighting’ (8). It is a struggle now more than a hundred years old, and, as one might expect of any field of the culture industry, jazz is not and has never been an emancipated musical practice. As Horne describes it, the social and political context of contemporary jazz would not sound unfamiliar, mutatis mutandis, to, say, Joe ‘King’ Oliver, the mentor and teacher of the young Louis Armstrong: ‘the overall climate in the United States in the early twenty-first century – a surging white supremacy, an unleashed capitalist class, a weakened labor movement – indicated that despite victories, the path ahead would continue to be rocky indeed’ (339). Horne’s project is to document that long struggle, and in the tradition of Marxist jazz scholarship, we might place Horne’s work alongside that of Frank Kofsky, though Horne’s intent is to provide a broader reading of the history of the exploitation of predominantly African American musicians and artistic cultures.

In pursuing that reading, Horne’s account follows the conventional periodization of jazz history from its beginnings in New Orleans at the dawn of the twentieth century through the swing era and the bebop period to the post-Coltrane era. Along the way, he dedicates significant space to the political economy of the geographical centres of jazz practice, particularly Kansas City in the swing era and New York in the bebop period. Horne is also aware that the very term ‘jazz’ is fraught for critics and musicians alike, signifying to some an effort to diminish the seriousness of a largely African American art form and to others an effort to constrain and ultimately regulate artistic practice, even though for still others, including the saxophonist Dexter Gordon, it resonates as a term of pride. At moments in his discussion, Horne gestures toward a more expansive history that would include a detailed consideration of the contemporary period in jazz history, a period in which some forms of jazz practice have been seen to be utterly compatible with a neoliberal hegemony, while others, particularly those associated with the tradition of the jazz avant-garde, have been resolute in their opposition to those forms of appropriation.   Unfortunately, but perhaps understandably when one considers that much has already been written and said on this issue, not all of it productive, the contemporary period does not enjoy its own treatment in Horne’s discussion, though it is a moment that is entirely caught up with the political economy of the music, particularly, as Horne himself notes, when we consider the vast transformations that digitalization has effected over the last two decades. Elsewhere in his discussion Horne points to the importance of earlier moments of technological change in the production and distribution of jazz – the wide distribution of phonographs, the arrival of the jukebox, and the emergence of television – but those moments are not the focus of his analysis.

What is central to Horne’s argument is the persistence of distinct forms of exploitation that run throughout the history of jazz. The most pervasive and fundamental of these is the oppressive impact of Jim Crow racism upon a musical practice that emerged from African American culture and that has been led historically, in the overwhelming majority, by African Americans. Horne documents well the experiences of musicians and others from the African American community who aspired to participate in the production and distribution of jazz and whose careers at every turn were marked by systematic disadvantage, exclusion, and racist abuse. He also effectively traces the lingering presence and strange convolutions of those racist practices into the Civil Rights era and beyond. Horne’s account of this exploitation is not new, but the range of his research is valuable, and he is particularly attentive to the complex and often quotidian ways in ‘the ingrained racism of the society in which the music was born, allied with the objective exploitation of musicians generating wealth […] combined to create a culture inimical to the health and well-being of the artists’ (15). Horne makes a point, too, of noting how figures like the promoter and producer Norman Granz, or musicians, particularly Dave Brubeck and the earlier big band leader Charlie Barnet, attempted from their relatively privileged positions to fight against these practices.

If jazz has been ineluctably shaped by racism, it has also, as Horne demonstrates, been burdened by other forms of exploitation that are distinctly identifiable but not unrelated. The most conspicuous of these in the early history of jazz is the impact of organized crime and political corruption, of which the most celebrated example, as Horne points out, is the Pendergast regime in Kansas City. Much of that impact can be traced in the first instance to the consequences of prohibition, but the presence of organized crime in performance venues and music production has a much longer trajectory, perhaps best exemplified, in Horne’s account, by Morris Levy, a co-owner of the historic New York jazz club Birdland in the 1950s. Horne also discusses at length the presence of organized crime in Las Vegas, again in the 1950s, even though Las Vegas, despite the employment opportunities it provided for musicians, is not typically thought of as central to the history of jazz. Horne does demonstrate, however, that African American musicians across the United States were often forced to forge relations with organized crime figures to secure employment, or, as in the case of Louis Armstrong and his manager Joe Glaser, to accept the protection of crime-affiliated figures in order to pursue their careers.

Horne also shows throughout his study how an ingrained racism enabled and exacerbated exploitative practices characteristic of the music industry and of professional performance generally. On the everyday level, Horne notes, these practices ranged from excluding African American musicians from employment in particular venues to paying those musicians less for their services, to, citing the drummer Max Roach, difficult and unequal working conditions in New York clubs: seven nights a week from 9pm to 3am in Manhattan, but 4pm to 8 or 9am in Harlem. Jazz record labels also participated in questionable practices, a point Horne establishes primarily through the well-known examples of Bob Weinstock of Prestige records and Herman Lubinsky of Savoy records. To suggest that African American musicians, and not only jazz musicians, have been exploited by particular performance venues and specific record companies is unexceptionable, but Horne’s contribution is particularly welcome for his focus on the ways in which musicians’ unions have also enabled these practices. In the Jim Crow era, unions were organized along racial lines: in 1943, for example, only two locals of the American Federation of Musicians, in New York and Detroit, admitted African Americans to full membership; at the time, there were 673 locals in the American Federation of Musicians, and of those, 631 were limited to those defined as ‘white’. When unions were eventually integrated, the process, as Horne points out, often worked to the detriment of African American musicians who found their interests subsumed or ignored by the larger membership.

But Horne’s narrative is also about political agency and resistance, and he provides a deft account of how, in the post-World War II period, the emergence of Black Nationalism in the wider culture informed the agency of jazz musicians, or as he puts it, ‘[t]he religious-cum-political trend filled the vacuum in the aftermath of the eviscerating of the left-wing and socialist trends represented by Paul Robeson’ (128). Among those moments of resistance that Horne valuably recalls for us are the multi-instrumentalist Rahsaan Roland Kirk’s ‘Jazz and Peoples Movement’ in 1970 and 1971, the saxophonist Archie Shepp’s links to the Black Panther Party, Max Roach’s Freedom Now Suite, and Charlie Haden’s performance of ‘Song for Che’ in Portugal in 1971. Political engagement was also part of earlier jazz cultures, as Horne points out, citing the support of the Ellington composer Billy Strayhorn and the saxophonist Ben Webster for FDR and the progressive politics of the New Deal. Another form of political engagement that Horne highlights, although it is frequently not considered expressly in those terms, is the role of expatriation in the history of jazz. Horne’s book begins with the swing trumpeter Buck Clayton in Shanghai and returns repeatedly to musicians who moved, most often to Europe, to escape the most virulent form of racism and injustice. As Horne explains, and as others have observed, the expatriate African American community helped shape European attitudes toward American policies at home and abroad and encouraged widespread expressions of solidarity with the struggles of African Americans in the United States.

Horne is also frank in acknowledging that progressive politics have not been universally embraced in jazz, as the conspicuous example of the stridently conservative bandleader Lionel Hampton demonstrates, and he is equally forthright in critiquing jazz’s masculinist culture. Noting at one point with respect to this masculinist culture that ‘[i]t would be an error to imagine that the origins of the new music were separate and apart from the wider U.S. society’, Horne suggests elsewhere in his discussion that we might look for the impact of ingrained racism and its deformations on the music itself, though one might wish that this aspect of his discussion were more fully developed.

As already indicated, this is a richly researched history drawing upon a wide range of sources, including important oral history archives. Horne’s Jazz and Justice provides an impressive overview of the complicated history of jazz culture and the political economy of jazz, and it invites the reader at every turn to engage with the diverse and densely documented world of what Charles Mingus once knowingly termed ‘so-called jazz’.