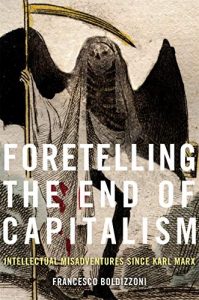 The twenty-first century has been catastrophic for capitalism as a mode of production. In a mere 20 years capitalism has gone through three major crises. The century was ushered in with a global economic slowdown in Japan, United States and the European Union topped off with dot-com collapse in financial markets. Even more serious was the Great Financial Crisis of 2008 and the devastation to middle class incomes and increased precariousness of low-income workers for the next decade across the globe. We are now enduring the third major crisis. The global economic slowdown began in late 2019, again starting in the advanced economies of United States, the Euro Zone, Japan, United Kingdom and Canada. The economic slowdown quickly manifest into a global Great Depression with the economic shutdown caused by a global pandemic.

The hardships caused by these crises and the inability of liberal state governments of capitalistic economies (especially US and UK) to adequately address the loss of jobs and incomes and the closures of small businesses have made urgent the question whether capitalism can survive.

Francesco Boldizzoni’s new book Foretelling the End of Capitalism: Intellectual Misadventures Since Karl Marx contends capitalism has an unexpected resilience and it is unlikely that capitalism will collapse anytime soon, and certainly not ‘at the hands of the gig economy’, nor ‘overturned by the new utopias of participatory planners’ (234). Boldizzoni discounts the possibility of an environmental catastrophe that will bring capitalism to an end (189-90). He contends environmental doomsayers were wrong in the 1970s (140-4), and environmental challenges won’t stop the march of capital accumulation. Boldizzoni points out that capitalism ‘does not need clean air to thrive, but only air that is barely breathable’ (193).

Boldizzoni is not defending capitalism on normative grounds. Rather, he demonstrates the history of capitalism is that it constantly overcomes its imperfections. Boldizzoni holds ‘the conviction that trying to predict the future is more often a distraction from the difficulties of the present than an activity useful in improving the human condition’ (15).

We can read Boldizzoni principal aim as to provide an argument that current forecasts predicting the end of capitalism following the Great Recession of 2008 or the Great Depression of 2020 will prove to be premature and simply another ‘intellectual mishap.’ He contends theorizing the end of capitalism is a ‘distraction’ from productively addressing today’s difficulties and improving the human condition through reform (276). He argues it ‘is better to leave the future to astrologers and focus instead on what can be done here and now’ (16). Moreover, he asserts if the progressive left fails to effectively reform capitalism, ‘its place will be taken by populist right’ (13). Thus, the only alternatives in Boldizzoni’s view are some type of New New Deal or a New neo-liberalism.

We can appreciate greatly Boldizzoni’s masterful presentation of nearly two centuries of the history of economic thought forecasting the demise of capitalism. The first four chapters are exciting reading, beginning with John Stuart Mill, Marx and Max Weber, neither of whom had any theory of the inevitable breakdown of capitalism, but instead had theories regarding the dynamics of capitalism that brought its long-term survival into question. All three of these thinkers believed capitalism had serious merits and serious flaws.

The First World War, the Russian Revolution, the Great Depression and the rise of fascism and Stalinism, gave rise to a new era of reforming Western capitalist economies. John Maynard Keynes came to represent the idea that capitalism could be successfully managed with the correct macroeconomic policy, while Joseph Schumpeter contended capitalism was economically stable in the long-run; nonetheless the social, political and institutional framework of capitalist society is radically unstable (101-9).

Postwar society ushered in new understandings of capitalism. A kind of consensus emerged that argued capitalist states were socializing themselves toward what John Galbraith called The New Industrial State (118) and a ‘planning system’ within capitalism, while socialist countries tended toward marketizing their economies. These tendencies constituted the great ‘convergence’ between capitalism and socialism. At the same time, the left Frankfurt School and right theorists such as Daniel Bell and Allan Bloom argued capitalism had generated a cultural crisis depriving individuals from living fully meaningful lives. Capitalism made humans into what Marcuse called ‘one-dimensional’ beings, culturally and morally deprived.

Political tensions mounted within national states, fiscal crises emerged, and worries about environmental catastrophe further condemned capitalism in the view of various theories. These problems were left unresolved and the debate suddenly shifted. In the 1970s and 1980s arose the New Right across the globe (146). A resurgence in capitalist institutions emerged and neo-liberal policy ordered the global economy, with a strong commitment to the idea that ‘There Is No Alternative’ (TINA) to capitalism and Fukuyama’s ‘end of history’ (148-82). Yet the turbulent twenty-first century has ushered in new forecasts of the ‘end of capitalism’ (183-93).

Boldizzoni is not impressed. He contends these new theories will prove to be new intellectual misadventures and capitalism will persist. In the fifth and penultimate chapter, Boldizzoni performs an ‘autopsy’ on the ‘intellectual misadventures’ of predicting the end of capitalism.  This chapter argues four important points. First, he convincingly establishes the conditions of forecasting as (1) human action determines history; (2) forecasting assumes a sense of progress; and (3) the forecaster must have independence from social power pressures. Secondly, he categorizes fatal forecasting into four types: (1) theories of implosion, such as Rosa Luxemburg, where capitalism collapses from its internal contradictions; (2) theories of exhaustion, such as Mill, Keynes and environmentalists where productivity hits a limit of capacity; (3) theories of convergence, such as Galbraith, whereby capitalist and socialist economies evolve over time such that they become interchangeable; and (4) theories of cultural involution, such as Frankfurt School and Daniel Bell, whereby the system destroys the internal drive of its subjects.

The third application of Boldizzoni’s autopsy is to explain why forecasts fail. However, his arguments of ‘cognitive distortions’ and ‘theoretical flaws’ are at best partial. Finally, he addresses the relationship between forecasting and utopianism. His argument wanders and comes across as unconvincing. His handling of Plato as a utopian thinker is obtuse. Although his presentation is tortured, there is an important point embedded within it. In the so-called ‘intellectually misadventures’, there is a close connection between prophecy and forecasting. This is a relationship between the normative/ethical judgements and positive/scientific forecasting. Boldizzoni seems to be troubled by Hume’s Law, whereby pure facts from science cannot generate ethical judgements, and may help explain his tentativeness toward revolutionary emancipation.

The deeper elements Boldizzoni ‘discovers’ from his ‘autopsy’ are hierarchy and individualism (245). Accordingly, these elements of capitalism generate a thick bourgeois culture that keeps capitalism in place in spite of its flaws, and resilient in spite of its crises. This is anticlimactic. To be sure these elements of bourgeois culture are radically important to the resilience of capitalism. But it is shocking Boldizzoni says nothing about institutional developments and policy innovations that have transformed capitalism in the past as at least part of his autopsy.

Moreover, class hierarchy and individualistic culture hardly needed to be discovered from an autopsy; both are well established within the literature of social science. Boldizzoni claims those ‘who have materialist conception of history tend to think that cultural attitudes’ generating acceptance of capitalist hierarchy and market individualism ‘can be reversed by material progress’ (15). Although such naïve Marxists certainly exist, Boldizzoni is manifesting a straw-man theorist. He fails to bolster his argument from the exciting and relevant traditions of Marxian theorists on culture and ideology.

Boldizzoni seems unaware that Marx and twentieth century theorists understood, and twenty-first century theorists understand, the role of bourgeois culture in sustaining capitalist hierarchy and market individualism through the culture industry of television, films, newspaper and especially the sales effort of mass advertising. The cultural aspect of capitalism is embedded in what Max Horkheimer and Theodor W. Adorno called the ‘dialectic of enlightenment’. The enlightenment movement had emancipated human beings from natural need and feudalist exploitation only to transform itself into a new form of barbarism expressed in and through capitalist society. The culture industry keeps the beliefs and ideology of individuals geared toward and committed to a capitalist and market mentality.

Furthermore, Louis Althusser explicitly developed his notion of ideological state apparatuses (ISA), which includes political and legal practices, along with media and technology industries, churches, sports and social clubs, and especially institutions of education and family that promote and reproduce bourgeois culture. The participation in the institutions of ISA do not deceive ready-made individuals, but constitute individuals’ self-identity and beliefs from their interaction and participation within ISA.

Additionally, Antonio Gramsci contended actions of participation in social institutions create a ‘cultural hegemony’ whereby individuals develop a common sense or practical consciousness geared toward navigating social circumstances of everyday life, at the expense of seeking other existential and internal motives. This thread could take us even further to Paulo Freire and the importance critical pedagogy for addressing the false faulty and/or naïve consciousness generated by bourgeois culture. Boldizzoni does not address, let alone develop this Marxian theoretical thread on the role of culture.

Boldizzoni further cuts off the tradition inspired by the Frankfurt School that argues some desires are repressed by bourgeois culture and other desires are fed by it. He claims this is simply ‘moralizing about capitalist society. As such, it appears dated today’ (256-7). It is not difficult to disagree here. Boldizzoni believes ‘socialism is not inscribed in human nature, neither are greed, privilege and oppression’ (275). But the Frankfurt tradition contend nearly the opposite, or more accurately, that human nature and desire are complex and contradictory. Culture can promote personally productive or personal destructive desires and motives, and human beings must make value judgements to determine the cultural traditions to support.

Foretelling the End of Capitalism is an intellectual achievement. Although criticisms of Boldizzoni’s conclusions can be invoked, he has made a very important contribution. The deep and sophisticated Marxian tradition has some combination of implosion, exhaustion, convergence and cultural involution, and either implicitly or explicitly rejects a strong version of Hume’s Law. Foretelling the End of Capitalism will be an excellent reference point for debating the future of capitalism and human history.