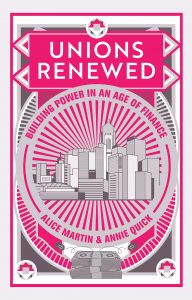 Morgan Rhys Powell is a PhD candidate at the University of Manchester, researching the emergence …

Whilst writing this review, news emerged that the Arcadia Group – owner of multiple retail chains in the UK – had gone into administration, threatening 13,000 jobs. Although company officials were quick to blame this on the impact of COVID-19, the reality goes far deeper, with Arcadia having been embroiled in dangerous financial practices for years, becoming reliant on cheap credit from investors gambling on high returns. Workers at Arcadia’s multiple franchises have faced an overarching sense of precarity since at least 2015, with the selling off, gutting out and eventual collapse of its British Home Stores chain, which saw hundreds of millions stolen from pension funds. Whilst there have been sporadic instances of union organising amongst Arcadia’s workforce, no strong union presence has taken root and no efforts to force recognition agreements have succeeded. We can only speculate over whether a strong union presence could have altered workers’ fortunes in any case, faced with a distant, uninterested management embroiled more in seemingly complex financial matters than in day-to-day concerns with the workplace.

Martin and Quick provide a means of understanding and approaching such increasingly common circumstances, introducing financialization to an audience of labour organisers and workers in a way that is accessible to those of us who are unfamiliar with the intricacies of stock, liability and equity. Through a focus on union decline and efforts at renewal, the authors explore how the increasing influence of finance on physical sites of production has raised barriers to building workers’ power, and consider what we might do to overcome those.

Unions Renewed is ambitious, also considering the purpose of organised labour in the contemporary context (5) and how ‘economic democracy’ – the authors’ alternative to financial capitalism – might be brought about (8). Whilst broad, this approach goes beyond the diagnoses of similar recent texts on finance, moving to vital questions of resistance and strategy.

The first chapter provides a general but compelling introduction to financialization. Rather than engaging in debates over definitions, the authors illustrate their case with specific characteristics and results of financialization which shift power and wealth away from labour, demonstrating the increasing influence that fictitious capital has on sites of real accumulation. These include prioritising shareholders’ immediate interests over productivity and innovation, ruthlessly reducing spending through redundancies and outsourcing, and loading firms with unsustainable debt to invest in speculation or avoid taxes (20-39). In combination, these practices result in substantial reductions in the quality of working life that many of us will have experienced, and – in cases like that of Arcadia – leave workers to face the consequences of collapse when financial aims are exhausted. Crucially, the shift in owners’ priorities and spending ever-further from production to financial dealing undermines the ‘classic union model’ of bargaining and threatening strike action; as the authors so bluntly put it, ‘workers only have the power to demand higher wages or better conditions if employers need them to work in order to profit’ (23).

At the same time, the authors are careful not to detach financialization from its capitalist context, reminding readers that current financial practices constitute ‘the latest manifestation of capitalism’s tendency to create new forms of rent-seeking’ (18), driven by the interests of the owning class, and ultimately reliant – if at increasingly obscured levels – on productive labour (85).

Having laid this foundation, the second chapter turns our attention to the nature and response – or lack thereof – of unions. Martin and Quick survey the history of US and UK unionism, drawing particular attention to the role that the state has played in union decline since the 1980s, from Thatcherite attacks on unions’ institutional and shopfloor power, to New Labour’s careful efforts to avoid re-establishing that power (52-7). The result is a sense of starting from scratch in ruthlessly hostile circumstances.

Importantly, the authors explicitly recognise the labour movement’s own failures, rather than pinning the blame for decline exclusively on external, structural factors. Unions have largely retreated into ‘legacy industries’ where collective bargaining agreements often still exist, defending their presence in such places at the expense of targeting newer workplaces where younger workers, migrants and workers of colour are more likely to be found (60). They have collapsed into economism, confining their ambitions to the immediate at the expense of more transformative struggle, morphing into ‘narrow, service-oriented organizations’ (79). Their nostalgia for the golden era of postwar consensus placates militancy in favour of desperate attempts to achieve ‘win-win’ solutions which tend to look more like concessions (67).

Anyone who has tried to organise with mainstream unions in non-unionised workplaces will be familiar with the severely limiting effects of these trends, fostering quagmires of risk-averse bureaucracy from which resources and support are near-impossible to extract. Meanwhile, finance continues to reshape the economy in self-perpetuating ways, compounding a ‘sectoral trap’ which unions will struggle to overcome: concentrating profit and power in industries with few workers, such as real estate and insurance (31-3).

The last two chapters turn to strategy, sketching some preliminary steps towards challenging these circumstances. Despite their shortcomings, unions remain imbued with transformative potential by virtue of their nature as expressions of working class power (137). Recent waves of militancy in rich, financialized countries demonstrate this, from the teachers’ strikes in the US, to ongoing organising efforts amongst such precarious workers as cleaners, foster carers and couriers in the UK. The challenge is to radically update union strategies to respond effectively to the hostile, financialized present.

Community unionism – involving all those who surround a workplace in specific struggles, and in turn supporting broader, non-workplace struggles – provides ways of facing down finance in the multiple sites where it holds sway, such as through supporting renters’, debtors’ and benefits claimants’ campaigns (77-80, 90-7). Drawing on traditions of industrial unionism, such as by organising outsourced contractors alongside in-house employees and by collaborating between unions, could mobilise ‘the whole bargaining unit’, maximising the impact of strike action (80-1). Recent wildcat actions and smaller, ‘challenger’ unions provide examples of how to practice greater internal democracy, to sustain determined efforts at reaching migrant and youth workforces, and to be brazenly militant in the face of unscrupulous bosses (100-2). When faced with an obscure and disinterested management, shareholder activism provides one possible means of exerting pressure (87-90).

The final chapter is devoted to the strategy of ‘democratizing ownership’. The tendency of financialized firms to collapse opens space for workers to ‘pool resources to buy out their local branch at a discounted rate’ and run their workplaces as cooperatives (108). Unions can play a coordinating role in such efforts, simultaneously widening their influence and tangibly improving working conditions in the real economy, prefiguring ‘a more democratic economy of the future’ (108, 117),

Whilst the authors acknowledge critiques of cooperative models (112-3) and claim at the outset that co-ops ‘don’t have to be side-shows to the ‘main’ economy’ (7), they lack in-depth engagement with such concerns. Cooperatives – such as those currently proliferating in the platform economy – necessarily struggle to gain footholds in the marketplace when faced with the might of their well-financed competitors and the regulatory demands of the state. Such pressures can have drastic effects on their operation, particularly in their practice of internal democracy when threatened with collapse, as is the case for many of the examples that the authors explore. It is, of course, beyond the scope of this book to rebut all potential critiques of the authors’ proposals, but with a whole chapter devoted to this strategy, greater consideration of how cooperatives could be anything other than more tolerable appendages to capitalist exploitation would have been appreciated.

Other tensions emerge in the authors’ strategic proposals, particularly when considering relations between unions and the state. At various points, Martin and Quick call for ‘building [unions’] institutional and political power such that unions can, alongside business, have a more formal role in government decision-making’ (6). They identify the state as the only body capable of sufficiently reducing the influence of finance (133). At times, they appear to go as far as to attach the fate of unionism to that of social democratic parties – specifically the Corbyn and Sanders projects – reducing organised labour to ‘a precondition for this type of political party to secure and maintain power in government’ (45). Yet at other points, the authors recognise that the power and mobility of finance would limit the effectiveness of any pro-worker legislation (37, 68) and that recent electoral socialist projects have failed, severely reducing the immediate potential of this strategy (67, 136).

Whilst there are points where Martin and Quick identify community unionism and worker control as alternatives to state-centred strategies (114), their ultimate reliance on the state indicates a gap in the book: a lack of engagement with syndicalist and Marxist approaches to labour unionism, where the union in itself – independent and critical of the state – is seen as containing a wider revolutionary potential. Whilst Graeber’s anti-work politics is alluded to when discussing reductions in working time (132), greater engagement with these traditions could have enriched the book’s analysis of the potential imbued within union renewal, as well as providing a critique of unions’ reliance on institutional power and a more systematic account of their tendency to collapse into conservatism. That elements of these radical traditions exist in recent waves of worker militancy makes such engagement all the more pertinent.

Overall however, Unions Renewed engages especially well with the grassroots of current efforts at renewal. Interviews with union organisers and examples of ongoing struggles illustrate points throughout. By detailing strategic proposals as well as demystifying the complexities of finance, the book appeals to an audience of militants and provides a tool for political education within unions. It stands as an urgent and accessible contribution to discussions on union revitalisation, and it will become ever more essential reading as we consider how to build workers’ power in the midst of crises like that of Arcadia.