Marx & Philosophy Review of BooksReviews‘Critique and Praxis: A Critical Philosophy of Illusions, Values, and Action’ by Bernard E Harcourt reviewed by Michael Maidan 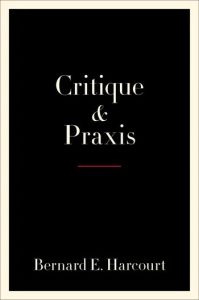 On his website, Bernard Harcourt presents himself as an author, editor, litigator, executive director, teacher, publisher, scholar and advocate. Harcourt has authored nine books and has edited several volumes of Michel Foucault’s Lectures at the College de France. He is also an activist litigator, defending death row inmates. Harcourt teaches law at Columbia Law School, is the Executive Director of the Columbia Center for Contemporary Critical Thought and convener of the 13/13 Columbia seminar on critical social philosophy. His latest book, Critique and Praxis builds on these foundations. Or rather, on the tensions between those diverse areas of activity.

In one of the many autobiographical and self-reflective sections of his book, Harcourt presents the problem in this way:

For decades, my critical theorizing challenged, and most often undermined, my political activism—and vice versa, my interventions confronted and deconstructed my critical theory. The dream of any unity of theory and praxis turned out to be just that […] This all came to a head with the growing crises at the turn of the twenty-first century […] And it seemed that critical theory, at least in the United States, had little to say […] When I was fully immersed in representing a man sentenced to death, the turmoil and questions calmed. I suddenly felt that I knew what I was doing and why. You may think that critical theory nourished me […] You may think that it is because I am a critical theorist that I went […] to represent these condemned men. But it’s exactly the opposite—I practically had to turn off the critical theory to get the job done. What motivated me and nourished my struggle was the injustice in their capital cases, to be sure, but more than that, it was their lives. (468)

Before we conclude in haste that no theory is needed and that an ethical commitment is all we need to motivate and guide us, Harcourt admonishes us about the severe limitations of the well-meaning theoryless practitioner. Drawing on his law expertise, he shows how,

Harcourt’s book is organized in four parts, the first two of which are a reflection on critical theory, the third part analyzes and reconstructs, using present-day examples, different forms of praxis, and a fourth one as a dialectical synthesis of the preceding ones, i.e. a critical praxis.

Prior to the four parts, a chapter entitled ‘Towards a Critical Praxis Theory’ summarizes the whole enterprise. Harcourt begins by rejecting the Marxian and Marxist tradition as dated, preferring a Nietzschean approach instead. From the old Marxian enterprise, Harcourt rescues the principle that criticism should be oriented to intellectual enlightenment and social emancipation (19). His approach draws from the contemplative form of philosophy and the creative mode of poiesis (production) to posibilitate a space where practice and critical thought constructively confront each other. The imagery evokes an encounter between theory and praxis that is open and non-authoritarian, one that does not postulate the primacy of praxis over theory or vice versa, but rather conceives their relationship as an unstable and partial equilibrium. Another formulation he uses is a ‘counter-foundational critical theory’ (191), inspired by Foucault’s work, among others. Quoting from Foucault’s 1981 Louvain lectures, Harcourt explores the idea of a ‘counter position’, which is not the opposite of what is being countered. It is ‘to go beyond the original opposition […] to generate an autonomous conceptual form’ (193). ‘Counter’ has a different relationship with its object than ‘anti.’ In ‘counter’, there is a more intimate relationship to the object being addressed. The counter move utilizes the object’s own logic, like in a jujutsu move (the example is Harcourt’s). We find a different way of presenting this intuition earlier in the book, where Harcourt discusses ‘truth’ as it relates to social interactions. He exemplifies this idea with reference to a judicial verdict. A verdict is not a truth in the ontological sense but a balance of arguments and pieces of evidence. By definition, a verdict is open to future revision, according to specific rules (appeals, sentencing, etc.) (186-187). Harcourt’s position is fiercely anti-foundationalist: ‘this is a world in which we never get the original meaning […] we never get to truth in politics. Instead, we unveil, and act, and continue to unveil more. But we do not get to solid ground’ (213).

Praxis, in this context, is not any ordinary action in the world. It is an imperative action. This ethical turn means moving from the traditional slogan ‘what is to be done’, which Harcourt paraphrases as ‘telling others what to do’, to a new, refashioned one: ‘What more am I to do, and how does what I am doing work?’ (24). This injunction has two parts. The first one is ethical. The second refers to theory, to an objective evaluation of the results of my action.

We can compare this position with a traditional Marxist understanding of action in the context of social change. In the Marxian approach, the call for action is directly related to an analysis of the historical development of the system of capitalist production. It draws not only its content but also its legitimacy from a positivistic description of society’s development. Interestingly, forty-six years earlier, many of the same questions raised by Harcourt were formulated by Habermas in the introduction to Theory and Practice. It is a pity that Harcourt does not address this book of the young Habermas – while he discusses several of Habermas’s later works – who seems to parallel his own concerns. Like Harcourt, Habermas also rejects positivistic social science as being merely contemplative. But Habermas believes that the opposition between theory and practice can be mediated through the intervention of theory in processes of reflexive collective will formation. Revisiting the same problem, Harcourt opts for a more spontaneous approach. He draws inspiration from Foucault’s remarks that to criticize the government means a refusal to ‘being governed thusly’ (382; quoted from Foucault’s 1978 conference What is Critique).

While Harcourt is far from dismissing the importance of critical theory, his suspicions of the positivistic ambitions of theory lead him to emphasize forms of practice independent of theory. Characteristically, a chapter that is devoted to a reconstruction of critical theory carries subheadings such as ‘Counter Foundational Critical Theory’ and ‘Overcoming the Epistemological Detour.’ Harcourt’s suspicions of the reifying powers of theory lead him at times too much in the direction of anti-foundationalism, and to look for paradigms in unstructured social movements like Occupy Wall Street, the Arab Spring, Black Lives Matter (BLM), the Yellow Vest movement in France, notions such as ‘Assembly’ (thematized in different ways by Judith Butler, Michael Hardt and Tony Negri), and the writings of a French small anarchist group known as the Invisible Committee. What attracts Harcourt to these and similar acts of resistance is their lack of professional leadership and independence from traditional political parties, trade unions, organized ideologies, etc.

An issue that shows prominently but is not analyzed in detail in the book is the idea of ‘abolition’, which has been popularized in recent months by the BLM movement. Harcourt claims that US society is governed by a punitive paradigm, which he also identifies with the application of counter-insurgency doctrines to society after 9/11 and neoliberalism. Abolition refers to the fight against the effects of this paradigm. Like Foucault, Harcourt refuses to reduce punitive governmentality to economic realities. But Harcourt sees more space for improvement within the system, e.g. by way of critical legal praxis. Harcourt devotes a whole section to discuss the relationship between law and politics (491-503). While certainly law is neither neutral nor evenhanded, Harcourt seems to believe in a combination of legal, extra-judicial and political interventions. Educating the masses doesn’t seem to be one, or at least not a privileged form of praxis.

Summing up, the relationship between theory and practice seems to be as follows: theory is presented mainly as a ‘negative hermeneutics’ which is foundationless (i.e. not a positive science), and whose essential task is to dispel the illusions that favor the continuance of the status quo. Harcourt claims that those illusions (e.g. the idea of a free market composed of consenting individuals as an ideal of social interaction) may not be the cause of but plays a role in consolidating social injustice. Critique seems to provide neither the justification for praxis nor to guide practice tactically or strategically. That guidance is of the province of specific intellectuals (e.g. lawyers) or the leaders of specific struggles (such as Occupy Wall Street or Black Lives Matter).

Harcourt has produced a challenging book, which addresses many of our current predicaments, and he has the moral authority to command our attention. But his ‘theory-lite’ account of the relationship between theory and praxis risks being unconvincing for many.