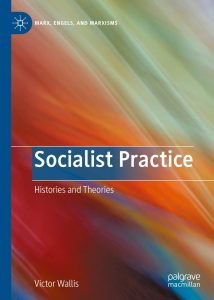 To read this book in the run-up to the US presidential election was an experience of acute cognitive dissonance. Victor Wallis’s articulation of the philosophical groundings of left social movements at first seems worlds apart from an election campaign enacting a confrontation between Biden’s cautious progressivism on the one hand and Trump’s opportunist demagoguery on the other. But in this set of careful, critical essays, interfacing between Marxist theory and economic, social and environmental praxis, Wallis offers much for American activists and thinkers seeking to move beyond the current degraded state of politics in their country.

A veteran of left activism, Wallis’s 2018 Red-Green Revolution: the Politics and Technology of Ecosocialism demonstrated his conviction that environmental catastrophe can be averted only from within the context of a Marxist analysis of relations of production and consumption. His 2019 collection of lectures, Democracy Denied, exposed the historical context for the US paradox of widespread popular support for a political and economic paradigm which systematically delivers inequality and deprivation. Appreciative readers of those works may find this one less immediately resonant with respect to today’s political challenges. Nonetheless, in bringing together historical-theoretical perspectives on Marxist theory and more focused examinations of particular social movements, Wallis provides further insights into the opportunities and constraints facing those seeking to act for change.

Socialist Practice is a book in two parts. The first, ‘Issues in Applied Marxist Theory’, examines Marxism through the lens of historical developments in the twentieth century and how these have influenced political discourse both about socialism and within socialist movements. The second, ‘Social Movements and Political Leadership’ looks at various manifestations of left activism, primarily in a US context, and considers what lessons may be drawn from them. Wallis pulls together themes from the essays in a conclusion which functions as a call to action to US socialists in particular, although it is equally pertinent to any activist seeking to harness and sustain the current upsurge of interest in radical politics.

Part I effectively functions as a Marxism primer for those who, like Wallis himself in his younger days, have not yet found a political-theoretic domain in which they feel comfortable. Wallis is not afraid to meet readers who are coming from the purported post-ideological perspective of the twenty-first century on their own ground, acknowledging the shortcomings of real-world experiments in socialist government while at the same time drawing attention to important successes which were first written out of Cold War narratives and subsequently elided or indeed rolled back in the capitalist triumphalism which followed the dismantling of the Soviet bloc. Chapter two is a passionate defence of the relevance of Marxism for the formulation of political responses to the social and economic inequalities generated by today’s ‘hyper-capitalism’. Chapter three denies the charge of reductionism often levelled against Marxism by its critics and examines the potential of dialectics for cultivating a genuinely diverse politics. Wallis sees dialectics as the solution to an impasse of liberal identity politics in which differing standpoints vie for priority:

[Dialectics] encourages us […] to recognize the richness and variety of human experience while at the same time looking for its not-always-obvious underlying structure […] [I]t promotes a political approach which, instead of simply aggregating a range of concerns, incorporates an analysis of the historical moment […] [I]t calls upon us to see each particular demand both in its own right and in relation to all other demands. (56)

This formulation of a relational approach to political discourse is of particular importance for Wallis, in an ongoing appraisal of the US political system as one in which the right both stakes a proprietorial claim to the material successes of embedded capitalism and exhibits a willingness to risk populist mobilisation of its ideological base, or bases. As he points out, Trump’s base and the nativist messages animating it are only the most recent manifestation of a scarcely-interrupted flow of anti-socialist narrative shaping American public life, in domestic interventions such as McCarthyism and the Cold War mentality as well as in the deployment of citizens in overseas aggression against left governments. Wallis sees the eco-crisis as marking a new phase in US politics, one in which the environmental consequences of what he calls ‘hyper-capitalism’ will become impossible to ignore and in which there is the opportunity for multiple responses to the crisis to resolve into a shared direction of travel which breaks with the destructive certainties of the past. The contribution of academic left thinkers such as himself is to draw out the connections among such responses so as to cultivate shared understanding and enable productive relations among different strands of resistance.

While Wallis is careful to acknowledge that he occupies a position of (multiple) privilege, it is nonetheless questionable how far he can authentically aspire to draw out real connections among the diverse and often divergent social movements which he understands as being so essential to the grounding of a left-hegemonic movement in the US. If the work of drawing out such connections involves a curation of actual conjunctions among such movements, then inevitably Wallis’s own Marxist commitments will give shape to that curation. This, of course, is true of any observer, and a Marxist perspective may offer insights lacking in many liberal efforts to map the landscape of resistance. However, if the intention is to derive a preferred direction of travel or orientation under which a plurality of experiences of struggle may be unified, then there is a risk that the one who draws out the connections may overlook or understate the importance of emergent connections co-created within coalitions of action and activism which are less easily accommodated within an overarching narrative.

Such possible constraints on Wallis’s political vision are suggested by chapter four, ‘Marxism and the Struggle for Social Justice’, and chapter six, ‘On “Market Socialism” and the Soviet Experience’. In defending Marxism against ‘end of history’ triumphalism, the text sometimes reads as if the American left up to the 1990s had an easy relation with socialism. Of course, Wallis is an optimist, as any longstanding socialist in America must be. But his own commitments stand in the way of an assessment of social justice movements, especially those grounded in identity, which does justice either to the complexity of their origins or to their limitations and potential in relation to social transformation. In the project of drawing out connections among resistances, Wallis’s thesis that ‘[d]ialectical reasoning makes it possible to integrate each and all of the particular identity struggles with class struggle, without diminishing any of them’ (72) threatens to substitute for the enacted dialectic between identity politics and class struggle.

In Part II, ‘Social Movements and Political Leadership’, Wallis offers a mix of general and particular reflections on the practice of socialist politics under capitalism. Chapters eight and nine are of particular interest, confirming Wallis’s commitment to political activism outside the electoral system and the possibilities revealed in the elation of 1968, the peak of left-liberation in America to date. In tandem with a celebration of that moment, Wallis reappraises the political scene fifty years on, assessing on the one hand the challenges presented to the left by globalised capital and fragmentation within the working class and on the other the opportunities arising from popular alienation from the political class and the response of grassroots movements. The tension in his work between optimism of principles and pessimism about prospects is evident in the closing sentences of chapter nine:

In order for [a left revival], all the component strands of activism must have come to recognize the interests they have in common. Are we now approaching such a conjuncture? Either the necessary steps will soon be taken, or the opportunity to take them will be buried in the crush of environmental breakdown, repression and war. (170)

Such pessimism about prospects is present also in the ‘case study’ chapters which conclude the book. Chapter ten is in the form of reviews of two documentary films, All Power to the People: the Black Panther Movement and Beyond (1992, Lee Lew-Lee) and 13th (2016, Ava DuVernay), allowing Wallis to contrast the complexities and community focus of the black political activism represented by the Panthers with the oppressive and divisive treatment of black people within the US criminal justice system. Chapter eleven, ‘Revolution and Counter-Revolution in Latin America: the Filmed Experience’, similarly examines its topic through the medium of cinema, covering political struggles and American interventions in them from Cuba to Chile, via Peru. Chapter twelve rounds off this section with a meditation on the part played by song in the US labour movement and in particular in the IWW, evoking how listening and singing may cultivate collective spirit and a vision for the future which transcends the oppressions and limitations of the present.

This recollection of a tradition of calls to arms sets up the concluding chapter, in which Wallis sets the present, politically dispiriting, moment in a historical perspective and outlines his view of the scope for action in the US to counter hyper-capitalism and eco-catastrophe. In doing so, he highlights a spectrum of political challenges militating against change, from the undermining of working class-consciousness and the opportunist cultivation of racist intra-class divisions to the surveillance aspects of social media. Wallis remains committed to socialist awareness and solidarity as the tools for reasserting our humanity, both collective and individual, in the face of a hyper-capitalist reality. I’m still wondering whether he voted.