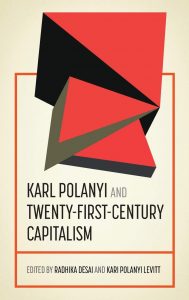 Intense interest in the writings of Karl Polanyi shows no sign of waning: in the last few years we have seen numerous special issues of scholarly journals devoted to discussions of the man, his works and their relevance to contemporary debates, as well as a positive avalanche of books. His incisive criticism of free market ideologies made him what one commentator has called ‘a kind of patron saint of globalization’s critics’ as did his insistence that government action was essential to protect societies from the intense damage that would inevitably result from the reign of free markets. This latest offering consists of revised contributions originally presented at a conference in Montreal in 2014 to mark the fiftieth anniversary of Polanyi’s death and the seventieth anniversary of the publication of Polanyi’s best-known work The Great Transformation (1944). The resulting volume, somewhat delayed in preparation, contains some very useful commentaries on the wide range of Polanyi’s works, rather than just the single famous book, but there is also particular attention given to the impact of these ideas especially since the rise of neoliberalism.

In her introduction, Radhika Desai outlines the major themes and the particular contributions of individual chapters but also sets the four major sections of what follows within the overall sweep of Polanyi’s life work and pinpoints the lasting relevance of each of these key themes. Desai’s focus in her own work has been on what she calls ‘geopolitical economy’ – including such issues as US hegemony and its challengers, globalisation, and the construction of empires of various kinds – and she fruitfully brings this perspective to bear on Polanyi’s contemporary importance. Building on this, Polanyi’s daughter Kari Polanyi Levitt (born in Vienna in 1923) provides a unique and detailed perspective on her father’s life and works. As is well known, Polanyi regarded money, labour and land as ‘fictitious commodities’, and the second part of the book deals with capital and the financial system through this particular lens. Whereas conventional economics regards everything that is bought and sold as a commodity, Polanyi saw money rather as a social institution that far pre-dates capitalism. In the third section, several contributors explore the relationship between Polanyi’s key concept of the ‘double movement’ – under which an increasingly marketized economy gives rise to the creation of a range of measures to protect societies from the worst effects of free markets – and socialism. Abraham Rotstein identifies the meaning that ‘society’ held for Polanyi, and Claus Thomasberger digs deeper into the concept of this ‘double movement’, while Hannes Lacher ruminates on why the great transformation was never really completed in the United States. In the final part of the volume, three chapters explore the influence that Polanyi’s thought continues to have on some key components of contemporary social and political thought: noted Polanyi scholars Margaret Somers and Fred Block give a Polanyian perspective on the work of Thomas Piketty and his widely acclaimed study Capital in the Twenty-first Century (2014); Chikako Nakayama points to the conceptual linkages between Polanyi and the World Systems concepts exemplified by Giovanni Arrighi in his numerous studies of imperialism and hegemony in the international arena; and Jamie Peck argues for the incorporation of a Polanyian perspective into the study of ‘variegated capitalism’, the rich variation of capitalism – and its current neoliberal manifestation – over space and time.

Any volume that seeks to celebrate the life and works of a great thinker  – if it is to avoid falling into mere hagiography – must attend to three major areas: an elucidation of the key features of the author’s thought; an evaluation of the extent to which the author has influenced later writers and particular schools of thought; and the ways in which the author’s viewpoints can be used to make important advances in the future.  This book certainly meets all of these goals, although I would question whether the need to look forward rather than back has been given sufficient weight. There is certainly much material here to cement the importance of Polanyi in the intellectual debates especially since the publication of The Great Transformation. Like all innovative and wide-ranging thinkers, Polanyi is difficult to fit into particular pigeonholes. Some Marxists have claimed him as one of their own and even suggested affinities with Gramsci, but others have seen closer links with Hayek’s thought and have even doubted if he was really a socialist at all. The various contributors to this volume who address this issue, either directly or obliquely, seem to have no doubt about his socialist credentials. Here his daughter insists that Polanyi was not a traditional European social democrat, nor did he support centralised communist planning. Rather, he followed a third stream in the socialist tradition, a brand that was syndicalist, populist, associational and communalist. He particularly admired the achievements of socialist Red Vienna, which he lauded as one of the high points of Western civilisation. Her analysis of the major strands in his thought are not based around The Great Transformation but rather around the largely neglected Bennington Lectures, presented after Polanyi was granted a visiting position at Columbia University in 1947 which served as a first draft of his major work, but they also reveal some planned themes that were never followed up in the final version and give us some clues about his relationship with Marxism. This judgement is also supported by the various contributors who have here explored the importance and continuing relevance of the concept of the ‘double movement’. They all make a convincing case, but in the final analysis is it really important to fit Polanyi into our normal categories? Surely, it is more fruitful, to simply regard him as an innovative thinker whose relevance to the debates of our own age has increased in recent years. Mercifully, this is the approach adopted especially in the later parts of the book.

Given the central role of finance capital in the modern age, the chapters that explore money as a fictitious commodity are particularly relevant. The role and nature of money, as Michael Hudson reminds us in his wide-ranging essay, has evolved over a long period in which debt and credit have been transformed from social and political relations into ones of mere exchange, but in this process financial interests have taken over the roles that both Polanyi and Marx saw for future democratic governments, in what amounts to a takeover of government policy by these financial interests. But, invoking one of the central tenets of Polanyi’s thought, is it possible for governments to resist the pressures mounted by global financial interests? Certainly, as Radhika Desai explores, the commodification of money  poses some real dangers, with shortages or surfeits of funds being just as damaging as floods or droughts. Polanyi’s concept of ‘crustacean nations’ could be important here, with the potential for central banks to create hard outer shells to protect societies from the consequences of financialisation. Oscar Galarza points to the ways in which big financial institutions, those ‘too big to fail’, are particularly protected from periodic financial crises in what is essentially a two-tier system of ‘re-embeddedness’ in which profits and privatised but losses socialised. These are important debates, and as these authors have demonstrated, Polanyi’s ideas continue to have great relevance.

Several contributions also make clear Polanyi’s profound influence on the development of ideas by later writers. Margaret Somers and Fred Block apply a Polanyian perspective to the work of Thomas Piketty and in particular his central claim that returns to capital tend to exceed the growth rate of the wider economy and of wages in particular, resulting in an inexorable increase in inequality. Piketty, they suggest, is too economistic, assuming that capitalism is subject to some unbending economic laws when in fact, as Polanyi always insisted, the distribution of incomes is the result of key political decisions.  Here, the book’s long preparation time has caught up with this chapter, in that Piketty has recently produced another weighty tome on Capital and Ideology (2020) in which he addresses the relationships between inequality and the policy choices made by governments. His call for a ‘participatory socialism for the Twenty-First Century’ perhaps brings him closer than ever to the goals advocated by Polanyi. The chapter by Chikako Nakayama also maps in great detail the legacy that World Systems approaches, exemplified here by Giovanni Arrighi, owe to Polanyi, but it would have been useful here to explore how Polanyi can also help us to develop new approaches to the study of the global economy, and in particular the future of the Global South in the current period of upheaval and crisis.

But one of the contributions that certainly does look forward, and highlights the value of Polanyi’s perspective, is a fascinating chapter – particularly relevant given the loud cries in support of ‘freedom’ in debates about both the responses to the current pandemic and in the recent Presidential election in United States – in which Michael Brie argues that Polanyi’s vision of freedom was quite different from the liberal version and this may eventually prove to be his most lasting intellectual contribution. His concept of freedom in complex societies had four key components: freedom necessarily involves freedom as solidarity, involving responsibility or duty, democratic freedom, substantial freedom, the ability to seek the goal of a meaningful and fulfilling life, and finally social freedom, or solidarity with popular movements that express the views and aspirations of ordinary people. In our current age, as Brie suggests, the search for a freedom that incorporates these four dimensions is essential as we seek to deal with the multiple crises inherent in capitalist civilisation. The starting point here, Polanyi insisted, must be the movement beyond the marketized society.

In summary, this book is a treasure trove of ideas and provocations for future work. Even for those who have some doubt about aspects of Polanyi’s legacy these diverse chapters show, in a very convincing manner, what a rich contribution he has left for us, including The Great Transformation but going much further and wider than that. At the very least we need to continue our dialogue with Polanyi and his ideas, for our understanding of our current crises and dilemmas will be greatly enriched in the process.