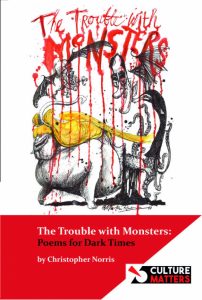 Christopher Norris
The Trouble with Monsters: Poems for Dark Times

When the reviewer is faced with verse instead of prose in a work devoted to excoriating ‘the most obnoxious, self-serving, mendacious, venal, and altogether deplorable figures in contemporary British (not to mention US) politics’ (ii), they are faced with initial difficulties. To begin with, what exactly is the reader looking at? Is verse satire with significant political and social events and figures in its crosshairs to be called a ‘poetry and politics’ (in the singular) or a poetry and politics (in the plural); do poetry and politics together form their own unique canon of verse criticism or is verse criticism to be separated always from its object? For the reader of The Trouble with Monsters: Poems for Dark Times, Christopher Norris’s own acknowledgment in the foreword of the limitations of the formalist style he’s chosen as a vehicle of criticism – ‘where different standards, rules or at any rate well-defined conventions apply’ (iii) – certainly muddies the waters.

And yet, for all that, Norris has clearly said what verse satire is and is not. He’s favoured a ‘poetry and politics’ synthesis that he’s identified as traditional lyrical poetry and has even, at the same time, named a potential rival: performance poetry. Traditional stanza, sound and even metrical devices – that America’s celebrated ‘language poet’ Ron Silliman once referred to as the arsenal of the bourgeois ‘school of quietude’ – might in the hands of the poststructuralist critic seem strangely inappropriate when there’s available a radical ‘performance poetry’ that is more at home in street activism. The latter is experimental, iconoclastic and avant-gardist to its core while the former relies on textual authority and editorial fiat. So why doesn’t Norris choose ‘performance poetry’ or something like it for his critical verses? It does seem odd that Derrida- scholar turned verse-satirist adopts the largely outmoded quietude of ‘formal structures’ (ii) and traditional poetic resources and devices, and this because of their forceful and persuasive powers. In fact, Norris contends that a formal poetics can provide focus and intensification of feelings appropriate to subject matter and, at the same time, ‘impose certain formal checks on the otherwise uncontrolled flow of vituperation.’ (ii) He has also in his ‘Letter to W.H. Auden’ pointed out the regrettable ‘laid-back style’ of leftist avant-garde satirists (42), as if there is a need now to do it right.

Therefore, Norris is faced with the problem of intention and design working at cross-purposes. It is poetry he offers his readers yet poetry for ‘dark times’, a collection of verses with a clear critical mandate. Again, does poetry only lock onto its target or is Norris presenting an entirely new innovative style of poetry writing for which an exclusively unique sociopolitical satire is required? Verse satire in the tradition of Juvenal, Pope and Dryden, beholden always to the poetic strictures and print-based conventions, cannot really accommodate the ‘simulacra’ and ‘mechanical reproductions’ of the postmodern. How odd then to try to make rhyme, meter and stanzaic patterns serve as a vehicle for criticisms of Donald Trump, Boris Johnson and Jacob Rees-Mogg, all creatures of ‘society of the spectacle’. Wouldn’t performance poetry (with its own theatre and experimental rhythms and gestures) have better delivered lines like ‘And then you tabloid journalists, you scum / Who thrive, dung-beetle-like, on fare / Most readers puke at…’? Of course, it is tempting to think that the poet-critic may, like L-A-N-G-U-A-G-E poets, be all too aware of the materiality of verse itself, the poem itself being parodied or highlighted for satirical effect, or visibly altered to purposely redirect the reader away from the medium to the considerably more significant message. And if Norris did choose verse, perhaps English radical poets J.H. Prynne and Basil Bunting might have offered better models for him.

But Norris stays faithful to the tradition as he sees it; he chooses readability over poetic artifice. Norris’s text cannot risk running aground in too esoteric or experimental verses; its poems are not meant to hide but to teach the truth of political activism. And that clear-sightedness is to be achieved via a traditional poetry and the focus and intensification of feelings it provides. It is Auden’s ‘good verse-manners’ (43) that Norris wants. For example, Norris’s Popean Mock- Heroic denunciations of fops like Jacob Rees-Mogg in ‘The Hate-Song of J William Rees Mogg’, complete with clever word-play, alternating four-and three-beat pentameter lines and historical/literary allusion, set a backdrop to monstrous personages and recent fascist politics in the UK and America: ‘It’s still the same fifth-column stuff, / With Trump in Hitler’s place, / And us his side-kicks keen enough / To push the fascist case.” (24). The stark symbolism of Grenfell Tower in ‘Grenfell: for the victims’, leaving little to literary imagination, can only be read as the most cutting indictment of the George Osborne austerity measures – ‘That blackened witness to the Osborne creed’ (31) – that had in the poet-critic’s view clearly caused the terrible 2017 West London fire. Symbolism and a rather awkward Joyce Grenfell Interior Monologue format work rather well almost in spite of themselves.

Another particularly striking instance of how a literary formalism can drive home ‘revolutionary’ themes is the conversion of ‘Jew’ (the ‘chosen-people case’) in Norris’s ‘An Awakening’ into a metonym for any dispossessed people. Norris the student of Derrida has upended the usual ‘Zionist’ and ‘Anti-semitic’ binary so that ‘“anti-Semite” would extend / Beyond its usual scope…’ (62) A slightly embellished allusion to Kipling’s story ‘Mary Postgate’ in ‘Daughters of the Vicarage’ is also enough to make the comparisons to Theresa May, the staid vicar’s daughter, and her cruel demonization of refugees a satirical tour de force. Because it is perhaps the one place in the poet’s catalogue of monsters where verse satire is completely transparent to itself, it is, in my view, Norris’s best poem. The Walter Benjamin persona in ‘Books and Toys: A Collector’ does double duty as critique of the intellectual pretensions of the bourgeois classes and a vindication of the life of the flâneur who, preferring exile to conformity, won’t ever follow prevailing intellectual/corporate tastes. The rolling enjambments in Norris’s poem expertly mirror the journeys, intellectual and physical, of the beleaguered Benjamin. If the Mary Postgate figure is the most devastating portrayal of elitist cruelty, that of the roving flâneur poses the greatest threat to ‘capital’s four-centuries-long spree/At our expense.’ (75)

Norris’s work might seem slapdash, clumsily trying its hand at various verse styles, were it not for the ease with which political and social injustices are always actually delineated. Satire, a genre directly inspired in Norris’s work by the lives and works of Brecht, Benjamin and Auden, drops its literary pretense once faced with the seriousness of the Grenfell Tower fire and the harassment and deportation of Windrush generation citizens. Literary formalism is oftentimes the harbinger of Marxist critique and street-level revolt. Poems with metaphysical austerity, like ‘Last Thoughts: Benjamin to Brecht’, enjoin their readers to just not think and revel in clever ‘mechanical reproduction/aura’-type distinctions, but to eschew ‘[a]ll thoughts whose action-plan’s not bonafide’ (35); even the rough sleeper’s dramatic monologue in ‘An Embarrassment’ (as in ‘An Unfortunate Case’) reveals, in short, a dramatic speaker who’s part of ‘us human flotsam’ and yet can mock the solemnity of a Windsor marriage event with surprising language fluency and a dispassionate analysis of the causes of the speaker’s own homelessness; and ‘Tragedy: A Cautionary Note’ offers cynical ruminations on the elitist Aristotelian tragedy, a ‘stupid doctrine’ that never ‘makes you think, rage, argue, answer back!’ (58) as it properly ought in any age rife with many social injustices.

Norris cannot avoid the temptation at times to make the communist case outright in case his readers have not properly connected the poems with one another. He’s strayed at the end, in poems like ‘The Communist Hypothesis: Ten Lessons from Alan Badiou’ and ‘May ’68: A Structuralist Riposte’, from an original impetus to tie ‘formal structures and resources to political ends’ (ii). To designate human injustice, for example, as ‘Evental site’ (89) and offer ‘grounding in set theory’ (90) as a potential remedy to political tyranny is to replace street-level activism with a ‘tendency to treat / The world as theory’s oyster’ (95), even though that may not have been Norris’s intention. He does make it look as if an academic discussion of ‘structure’ can be a sufficient condition of real ‘struggle, contestation and critique’ (97). There are times when the poem gives way to political artifice of its own. Thankfully, there are not many of these. It is Norris’s hope that the two traditions, namely, the political tradition and poetic tradition that he has tried to reconcile, must never be thought irreconcilable, and for the most part he has been successful.