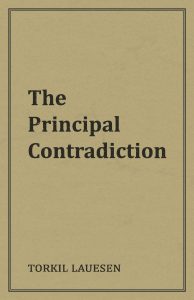 One of my frustrations with contemporary Marxist philosophy is the way in which the word ‘dialectical’ is often employed like a magical wand to sanctify various relational phenomena. Such vague employment is reflected in radical theory adjacent to Marxism as well where theorists pepper their work with the term ‘dialectical relationship’. Why such relationships are precisely dialectical is usually never explained, nor is the precise meaning of dialectical reason. This leaves me with the impression that dialectical and relational are taken to be synonymous––that the term ‘dialectical relationship’ is a tautology. In this context, Torkil Lauesen’s The Principal Contradiction is something of a breath of fresh air since it is concerned with centering and demystifying dialectical reason and, specifically, its iteration as dialectical materialism.

What makes The Principal Contradiction refreshing is that it partially resembles the kind of text that would be produced by a revolutionary study group. Indeed, it was inspired by Lauesen’s past participation in such a study group when he was ‘a member of Denmark’s Communist Working Circle’ (7) which would eventually lead to his own revolutionary activity––as a part of the so-called ‘Blekingegade Group’––and thus his eventual incarceration. Hence, due to the author’s past as a revolutionary and political prisoner, the book is driven by the sensibility that ‘[d]ialectical materialism is a philosophy, but not just for intellectual pleasure in ivory towers.” Rather, dialectical materialism is “a tool for changing the world.’ (7) The lucidity of the text is largely due to Lauesen’s correct conviction that the dialectical reason of Marxism has to do with revolutionary transformation.

Furthermore, although his book is grounded in a classical anti-revisionist Marxist conception of materialist dialectics (Marx, Engels, Lenin, and Mao), Lauesen also utilizes thinkers such as Foucault in a creative manner to shed light on his object of critique. Although such utilization occasionally feels forced, it demonstrates the author’s desire to explicate how his grounding in the classical conception of dialectical materialism is not an artifact of the past but a living philosophical perspective that can incorporate other philosophies and perspectives into its framework.

For Lauesen, the kernel of dialectical reason is contradiction (the unity of opposites), and how dialectical materialism is a theory of contradictions that not only treats the material ground of existence as primary (27) but also concerns social totality. In this sense, he grasps how the dialectical materialist perspective is concerned with the science of revolution rather than an ur-science (32) based on the Marxist axiom that history is the history of class struggle. He is also careful to delineate the dialectical conception of contradiction from the analytical conception, avoiding those pitfalls that analytic philosophers have used to dismiss dialectical reason. For example,
that capitalism is contradictory does not mean that the productive forces and the relations of production [along with other contradictions Lauesen discusses] stand in any logical [in the formal logic sense] contradiction to one another; it means that the social character of the productive forces and the private character of the relations of production together form a whole with contradictory aspects. (37)

Since, for most of existence, there was only ‘sporadic contact’ (68) between some nations, and no contact between most nations, to conceive of principal contradictions from the global perspective would only make sense with the rise of the capitalist world system since such a system is ‘one process.’ (67) Hence, Lauesen begins his analysis of global principal contradictions following 1492, the mercantile and colonial ‘beginning of this process.’ (69) The book charts the development of an interrelated world history from this moment, zooming in on conjunctural periods and the contradictions that defined these periods. We are thus treated to an exhilarating history of the contradictions between imperialist powers, between capitalist crisis and the state, between the capitalist and socialist blocs, between imperialism and the oppressed masses, and a variety of other key moments in the history of modernity to the present. Moreover, the way in which Lauesen tries to think the interaction between a variety of contradictions through the lens of a conjunctural and global principal contradiction is quite invigorating. By the time he reaches the rise of neoliberalism, the resurgence of the state (along with nationalism and national rivalry), and even the emergence of the current pandemic as part of capitalist crisis (119), we are left with the impression that ‘we need to develop an adequate strategy.’ (122)

The final and smallest section of the book attempts to sketch out the general contours of this strategy. However, this section largely functions as self-criticism for the failed strategy of the proto Third Worldism Lauesen and his comrades once embarked upon. Hence, the final chapter is more of a warning about the failing to think strategically than a handbook for organizational or military strategy. This negative critique, however, is wagered so that readers can understand that ‘we need to be prepared; we need to have the right organizations and practices.’ (125) What these correct organizations and practices are, however, is something Lauesen remains largely agnostic about (though the canny reader can guess what he forecloses), but it is clear he believes that the toolbox of dialectical materialism, as he has described it, will help others answer, through theory and practice, the questions he has raised.

When I reflect on these questions, however, one general criticism I have is the way in which the categories of historical materialism and dialectical materialism have been conflated. While it is indeed the case that this categorical distinction has also been doctrinaire and has thus resulted in a kind of scholasticism amongst various Soviet philosophers, I have always been of the mind that a distinction between science and philosophy––between historical materialism and dialectical materialism––is a useful rubric in thinking Marxism as a totality. To collapse these categories is to make the scientific apprehension of class struggle synonymous with philosophy, possibly promoting the notion that philosophy is the same as science, which is something I feel should be avoided. But this criticism is admittedly technical; it is possibly scholastic.

My larger criticism is the way in which Lauesen binds the apprehension of the principal contradiction to his conception of the global perspective. If ‘inner contradictions are the basis for… change’ (33) then concentrating on principal contradictions of the global system as being decisive, as the second half of the book seems to imply, would seem to elevate exterior contradictions above those of given social formations. While it is the case that these exterior contradictions are ‘crucial for the direction… development takes’ (33), referring to them as the principal contradictions would seem to be inconsistent––unless there are both interior and exterior principal contradictions. If this was what the author intended, it could have been both clarified and elaborated further. Such a slippage of categories, similar to my above concern about the conflation of science and philosophy, hampers an otherwise lucid primer on dialectical materialism. Paradigmatic of this slippage is Lauesen’s claim that, on the one hand, capitalism was generated by colonial conquest (70) and, on the other hand, ‘colonialism was a consequence of the contradictions in European capitalism.’ (74) Here there appears to be an outright formal contradiction, rather than a dialectical one, although it could be better thought as a dialectical contradiction, i.e. one form of colonialism that caused capitalism being transformed into another that was the consequence of capitalism, so that colonialism is simultaneously cause and consequence. In general, I got the sense that Lauesen plays a bit fast and loose with certain categories, undermining the overall clarity of his work. But, if we look at how much Lauesen is trying to pack into this relatively short work, it is not difficult to extend the principle of charity and overlook some of these problems.

Indeed, as one of the subheadings in the last section proclaims: It’s Not Simple. Thinking both dialectically and materially about historical conjunctures, especially as organizers interested in changing the world, demands more than formulaic repetition and phrase-mongering. ‘We cannot simply copy analyses and strategies from one time and place,’ writes Lauesen, ‘and simply apply them mechanically to other situations.’ (133) The Principal Contradiction, despite these flaws, demonstrates that the practice of dialectical materialism can and should be a creative endeavour, but one grounded in a concern for concrete circumstances, and we need more work with the same perspective.