Marx & Philosophy Review of BooksReviews‘Methods Devour Themselves: A Conversation’ by Benjanun Sriduangkaew and Joshua Moufawad-Paul reviewed by Fernando Wirtz 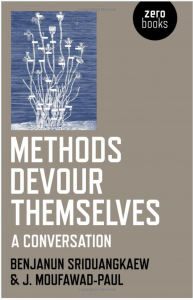 Benjanun Sriduangkaew and Joshua Moufawad-Paul
Methods Devour Themselves: A Conversation

While this book was published in 2018, a late review in the context of our current dystopian scenario (global pandemic, police brutality, destructive fires, etc.) seems appropriate. Drawing attention once more to this experimental and fascinating piece of ‘expanded philosophy’ that could also be termed ‘extro-science fiction’ is timely and pertinent. Coined by Quentin Meillassoux, this term is actually used to describe a literary genre not bound to the laws of hardcore science fiction, depicting worlds “inaccessible to a scientific knowledge” (Meillassoux 2015, 6). Since the unusual collaboration of the book between a scholar and a novelist (J. Moufawad-Paul and Benjanun Sriduangkaew) is a provocation against apocalyptic Hollywoodesque narratives, it is possible to consider the work as a whole as an example of radical speculative fiction attempting to envisage a world ‘inaccessible to a capitalist logic’. Here, ‘fiction’ is thus not to be read as the opposite of ‘real’, but rather as a praxis-oriented method of negotiating the real.

Contrary to Meillassoux’s ‘analogical’ use of fiction, Moufawad-Paul’s efforts consist in exploring a ‘non-museological’ philosophical and political treatment of fiction, conceived as a dialogue with a living artist (3) through a creolization of genres (short stories and essays). Literature should not merely serve as an excuse for philosophers to present their theories, but rather should be an opportunity to venture beyond theory, or to expand it. The book’s structure is hence defined by this premise: six chapters consisting of three ‘fictions’ composed by Benjanun Sriduangkaew, and three critical essays written by Moufawad-Paul. With the exception of the first story, each of these is to be considered a reaction to the previous chapter.

Sriduangkaew’s first story takes as its stage the convergence of two dimensions: our reality (in the story, Bangkok) and the mythic Himmapan forest. The main character, Khun Oraphin, happened to be in Himmapan as a child ‘before true convergence’, and, therefore, is now more receptive to the mixed logic of the new hybrid world. For this reason, while helping the old Khun Jutamat to deal with her phantasmagorical disease, after an enigmatic conversation with three giants, Khun Oraphin finds out about some still unresolved issues from the past.

“Debris and Dead Skin: the capitalist imaginary and the atrophy of thought”, Moufawad-Paul’s first contribution, is an exploration of what happens when myth saturates reality. The title of the essay presents quite explicitly his text’s central diagnosis: the “omnipotence of the capitalist imaginary” (31) produces a fettered imagination from which it is hard to escape. Building upon Mark Fischer’s concept of ‘capitalist realism’, the problem addressed in this chapter whether it is possible or not to escape the meta-logic disseminated by capitalist economy, which predicates that capitalism is the only possible organizational system. As in the superposed ‘changed world’ of Himmapan/Bangkok, the mythic fantasies of a fake-news-producing machine have invaded our reality, leaving no place beyond their fictions. According to Moufawad-Paul, this meta-narrative is so powerful that even some aspects of Fisher’s thought were imprisoned within this imaginary. Charging the signifier ‘Stalinism’ with its usual totalitarian connotation (e.g. Fisher 2009, 44), Fisher is unconsciously reproducing the alternative-less realist Manicheism of ‘capitalism or Stalinism (=totalitarianism)’ (where capitalism is the ‘least worst’ choice and, therefore, the only one) (39-40). To counter this pessimism, Moufawad-Paul proposes a re-reading of the histories and methods of “comprehensive, fighting, and revolutionary parties” (35). The battle between two Lefts, consisting of a heterodox wing thirsty for new methods versus an orthodoxy supposedly fixated on the past (34), proves itself sterile without a rigorous historization of their own mythologies. According to Moufawad-Paul, some good antecedents for a post-realist imagination can already be found in the past, for example, in the (Maoist) Communist Party of India or the Maoist movement in Peru. It is, therefore, doubly important (historiographically and politically) to engage with the remnants of peripheral mythologies (36).

Since this is a conversation, it seems pertinent to investigate how Sriduangkaew’s second story contests or reacts to Moufawad-Paul’s first critical text. In “Krungthep is an Onomatopoeia” we encounter the chronicle of Khun Suranut, a historian who lives and works (which seems to be the same here: “To be a citizen is to work”) on a ‘shipworld’ called Krungthep (again, the Thai name for Bangkok). She is requested to participate in an ‘experiment’ which consists in getting along with Gullaya, the pilot and only survivor of a failed expedition to the now devastated earth. The AI that regulates the whole spaceship (the ‘cortex’) suspects that the pilot did, in fact, kill her two other partners (the archivist and the scout), but does not know the details. After the secret is revealed, Gullaya is given the opportunity to decide whether to leave the ship or to stay and face the verdict of the administrative council. In a scenario governed by algorithms (the shipworld is also called a ‘fabric’, 61), this decision forms the climax of the narration. Sriduangkaew’s response to the inevitability of capitalist realism might be: possibility always survives in the liminality or periphery between technology (the AI) and bureaucracy (the council).

In answer to this parable, Moufawad-Paul writes “Living in Amber: on history as a weapon”, where he undertakes a re-evaluation of different historical attitudes. Moufawad-Paul contrasts the static life inside the shipworld with the desire of both characters to break through the fixed path of their destinies. By subsuming political administration under the variables of the efficiency and rationality of statistics and management, the futuristic state-ship still operates according to the less innovative “static doctrine of progress” (79), which is none other than that of our capitalist societies, where no real structural change is desired. This motionless logic inside the ship is also reminiscent of a museum, which Moufawad-Paul sharply compares with colonialism itself (75-76). A transitive inference permits us to deduce that colonial subjects themselves must sometimes endure this same reactionary logic. Not just conservatives are obsessed with a return to an idealized past; native intellectuals living in the colonies, as Fanon pointed out, must also face the temptation of subaltern culturalism, that is, of a simplistic idolization of their pre-colonial situation, something along the lines of ‘if Western philosophy is the ideology of the oppressor, the only remaining alternative is resurrecting aboriginal thought’. As the past is never fully given, but always fragmented, the practitioners of a “radical re-membering” (75) are never exempt from profound conflicts. The question that Moustawad-Paul raises is thus how the ‘weapon of history’ might be used as “a guide to future transformation” (78). Here, the author reintroduces the idea of his previous chapter, namely that the Left should be able to evince a “historical perspective that resists dominant narratives” (80) in its discourse in order to evaluate failures and victories. The historian in Sriduangkaew’s story, Suranut, here offers an extra clue left unthematized by Moustawad-Paul, namely her obsession with proper names. In fact, she becomes very enraged when the AI refers to Gullaya merely as ‘the Pilot’ (50), declaring later: “Did you know, there was a time when two women or two men couldn’t marry each other back in Muangthai? […] [T]heir lives and names deserve memorializing. Their struggles and their deaths. The ones who lived to see their dream, the ones who didn’t. The ones who got to finally marry at eighty-five” (52). Is this tension between the proper names and the onomatopoeia, personal and impersonal, which resonates in a discussion about radical memory? Maintaining the slogan of the second chapter, the historical perspective ‘from below’ (79) and from the ‘global peripheries’ (35) should here also be able to re-signify the power of proper names and embodied experiences.

In Sriduangkaew’s last piece “That Rough-Hewn Sun” (a prequel of her novel Winterglass, 2017) reverberate the concerns of the previous chapters, especially the problem of how to transgress necessity and destiny. Sriduangkaew’s prose is characterized by the introduction of non-binary pronouns. Although Moufawad-Paul’s reticence to make of this a point in his discussion is understandable, since we are facing a literary resource expected to be ‘normalized’ (and not exoticized), it is pertinent as it is closely related to the aforementioned issue of proper names. Accordingly, we encounter in this story Lussadh, the loyal general of the King Ihsayn (she/her). Her rival, the Winter Queen, has sent an envoy, Crow (they/their), to Ihsayn’s land. Lussadh is ordered to escort Crow and show them the palace, taking an active role in building a strategic good relationship with them. Lussadh’s status as general ties her to the commands of Ihsayn, even if the command consists in killing her own lovers.

At this point, the dialectic importance of necessity and contingency in all six chapters becomes evident. In his third and final essay, Moufawad-Paul’s apology of necessity against the superfluous liberal concept of necessity as totalitarian, echoes both the rehabilitation of ‘big party narratives’ within the second chapter, and his previous work such as Continuity and Rupture (2016). What remains slightly confusing here is the meaning of his own notion of necessity, since he does not sufficiently distinguish between the hardly translatable Hegelian concepts of ‘Notwendigkeit’ (necessity), ‘Not’ (exigency), and ‘Bedürfnis’ (need), using the words ‘necessity’ and ‘need’ without further clarification. What kind of necessity is Lussadh’s fixation on status? Rank requirements are not biological needs, nor causal conditions. Moufawad-Paul’s thesis that the “last consummation of [(]her[)] class necessity […] opens the possibility of freedom” (126), while is meant to demonstrate that the necessity of transgression (revolution) is the actual realization of freedom, does little to explain how the ‘peripheral narratives’ of the second chapter, or the ‘subaltern histories’ of the fourth chapter, can be articulated with a discourse of ‘compatibilist’ necessity. Historical materialism should be scientific, and, in this sense, Moufawad-Paul’s final statement that knowing “the necessities of our historical conjuncture” liberates us (130), is not to be rejected. Nevertheless, the problem remains as to how to reconcile the narratives of necessity with those of contingency. Even if we recognize a ‘necessity of contingency’, it should be possible to formulate clearly how to articulate the framework of necessary “comprehensive, fighting, and revolutionary parties” in light of other forms of resistance, such as gender politics.

As in the case of the climatic consequences of global industrialization, necessity should not be neglected. The difficulty consists in inverting the hierarchical supremacy of this necessity. This seems, in fact, to be the original aim of the book: to advocate the view that some ‘unexpected’ political agencies of the Global South are not mere historical and methodological ‘deviations’, but rather examples of global importance. Revealing these questions and proving that the power of imagination is extremely ‘necessary,’ doubtless number among the many achievements of this absorbing work of ‘expanded philosophy’.