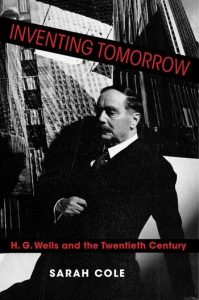 Seamus Flaherty is an independent researcher. His monograph, Marx, Engels and Modern British …

In Sarah Cole’s estimation, H. G. Wells (1866-1946) – ‘fiction writer, social commentator, political aggravator, all-round prognosticator, and worldwide educator’ – was ‘one of the greatest and most innovative writers’ of the twentieth century (12, 320). Whatever one thinks of Cole’s assessment what certainly cannot be denied is the sheer scale of Wells’ literary ambition. As Cole neatly puts it, Wells ‘wrote of and for a future that he believed his writing could usher into being’ (1). Inventing Tomorrow is, in comparison, remarkably modest in what it sets out to achieve. However, by almost any other standard, Cole’s aspirations in the book are far from humble. On the one hand, Inventing Tomorrow attempts ‘to rewrite the literary history of the twentieth century in England’; on the other, it seeks ‘to suggest proliferating possibilities for how literature might interact with the world’ (1). The book, then, is at once both vastly bigger than Wells, addressing the broader history of modernism and the important question of what literature can and should do, and centrally about Wells, who provided ‘a path that literary culture chose not to take’ – a path that Cole, in contrast to most literary scholars, fervently but critically endorses (2). Cole’s book is both monograph and manifesto.

In Inventing Tomorrow, Cole rightly complains that, despite his brilliance and versatility, Wells occupies an astoundingly marginal place both within the academy and outside it. Inside the academy Wells is read attentively by scholars of the nineteenth century, who see him as an interesting and symbolic figure of the fin de siècle, by science fiction critics, such as Darko Suvin, who regard his work as foundational, and by ‘a small cadre of Wellsians’, including the distinguished Wells critic Patrick Parrinder, who write comprehensively about his career (32). Wells’ general readership, however, is small. The vast bulk of his writing is out of print. And to the extent that Wells is read by literary scholars – Cole’s own field of expertise – it is, above all, in the context of Victorian studies. It is almost as if, Cole thus invites us to imagine, ‘today, we were just recognizing the genius and importance of Dickens or Tagore’ (10).

In his own day, Wells, certainly, was not short of readers or admirers. On the contrary, he was invited for private meetings with both Roosevelts, Lenin and Stalin; Winston Churchill read everything Wells wrote and frequently quoted him; and, in 1936, Wells came second in the list of favourite novelists polled by the Workers Education Association. Wells, in other words, was an author with a genuinely global reach, which cut across class, gender and political affiliation.

Wells, to be sure, was always controversial. Yet his status as ‘a writing, speaking, publishing, and disseminating phenomenon’ was never in doubt (55). Now, however, it is only as an author of science fiction that Wells’ reputation is secure. For Cole, Wells’ dramatic and rapid marginalisation after his death is best understood in relation to the self-understanding developed by the dominant strand within modernism, an understanding which was in part constructed in opposition to Wells, who figures, most pointedly, as one of Virginia Woolf’s ‘materialists’, concerned only with the trivial and transitory. According to Cole, it is precisely the success of mainstream modernism which explains why Wells is not read, notwithstanding the fact that Wells, as a global and planetary thinker, a thinker of catastrophe and opportunity, dystopia and utopia, ‘realist of the fantastic’, as Joseph Conrad called him, speaks so directly to us today (79).

Inventing Tomorrow is comprised of four chapters. Each addresses a particular theme drawn from Wells’ large corpus of work, namely ‘Voice’, ‘Civilian’, ‘Time’ and ‘Biology’. It is in the long introduction, however – much of which functions like a chapter itself – where Cole lays out her revisionist stall on literary modernism.

Cole defines modernism, firstly, in a broad sense, as ‘the attempt to create textual conditions, in significant part via formal innovation, to gain the measure of the modern world, with all of its sensory disjunctions and novelties, its technologies, and the economic and affective consequences of capitalism in the twentieth century’ (17). In these terms, she argues, ‘Wells exemplifies the idea’ (17). It is only in the more narrow sense, where principles such as ‘the primacy of subjectivism and the interior life of the mind, indirection and elusiveness’, absence of ‘political discussion or definitive position taking, the belief that the work of art is autonomous’, and the rejection of popular appeal are privileged, in which Wells cannot be considered a modernist (18).

What Cole does in Inventing Tomorrow is ‘place Wells within and among the known modernists, as one of the period’s great literary innovators’, while, at the same time, showing how Wells’ writing also clashed with modernist values (4). What this strategy yields is the idea of an alternative, more capacious iteration of modernism, where it is possible to tell as well as show, where didacticism is not strictly prohibited, where fiction blends with essay and direct analysis of matters such as economics, social change and history, where, in short, the ‘Art Form’ approach to the novel, as Wells put it in his famous dispute with Henry James, is eschewed in favour of an approach to writing that is ‘engaged with the present in an active, interventionist spirit, aiming to inject new ideas and produce change’ (28). Cole’s rendering of this alternative history and re-evaluation of what literature ought and ought not to do is consistently nuanced, eloquently and elegantly argued, and almost unfailingly convincing.

A key concept associated with Wells’ work of science fiction is ‘cognitive estrangement’, namely the effect of making the unfamiliar familiar or becoming estranged from our assumptions about reality. In Inventing Tomorrow Cole pursues a similar goal, defamiliarising the history of modernism as it has been handed down to us by the modernists and their academic advocates. Instead of antagonists, Woolf and Wells are thus shown to have been ‘kindred spirits in ways that have never been acknowledged by critics’; James Joyce is similarly paired with Wells, as Cole illuminates the ways their works are ‘allied and entangled’ as well as discrete and at odds; and we learn of Wells’ not insignificant influence on many other modernist writers (20, 34). In Cole’s chapter on ‘Voice’ we are prompted to consider Wells’ use of medical and scientific language as ‘a new entrant into the cohort of destabilising modernist methods’, and in her chapter on ‘Time’ we learn that ‘Wells’ writings form a crucial missing piece in our understanding of how modernism came to prehistory, nurtured its archaeological imagination, and conceived the relation of the long past to the present’ (95, 194). The book is replete with insights of this kind.

In the field of imagination and prophesy there are few writers, of any era, to rival Wells. Cole, however, is herself endowed with considerable creative flair, which she puts to excellent use in her analysis of the visionary thinker at the centre of her study. Inventing Tomorrow not only documents Wells’ many imaginative accomplishments – his invention of concepts such as ‘time machine’, ‘atomic bomb’ and ‘world brain’, or his anticipation of technologies like moving walkways, air-conditioners, electric doors and televisions – it also finds affinities between Wells and a diverse array of thinkers including Immanuel Wallerstein, Le Corbusier, Michel de Montaigne, Filippo Marinetti and Fernand Braudel. Wells, in Cole’s hands, becomes a progenitor of Big History, a generative thinker on the topic of total war and what it means to be a civilian, and a crucial contributor to the postwar discourse on human rights. Most interesting of all, though, to this reviewer at least, is how Judith Butler’s idea of ‘shared vulnerability’ as ethical incitement is enlisted by Cole to understand what Wells was doing in his popular wartime polemics (133). With Cole, Wells becomes an infinitely more complex and sensitive writer, perpetually ambivalent about the future of the species, interchangeably optimistic and pessimistic.

If Inventing Tomorrow is flawed, it is flawed for good reasons. Simply put, one can only do so much in 320 pages. Moreover, Cole clearly articulates what she intends to do and does it, fully aware of how Wells might be approached in alternative ways. That said, the decision to approach Wells thematically rather than chronologically does have its drawbacks and they are undoubtedly apparent in the text. It is, above all, at the level of influence and interlocutors that the reader might legitimately feel somewhat short-changed. For example, there is no mention of J.S. Mill, William Morris or Edward Carpenter in Inventing Tomorrow, despite the fact that each of these thinkers exercised a powerful influence on Wells’ thinking at critical moments in his career; and Marx and Marxism, similarly, are only brought in with Cole’s conclusion.

Certainly, if we wish to fully understand why Wells’ reputation nosedived so momentously, his assessment of Marx as ‘an uninventive man’ subconsciously aware of his own uninventiveness, whose influence had been singularly pernicious, must be accounted for. So, too, if we are to understand Wells’ peculiar brand of socialism, in which liberty and individuality so often threaten to overshadow equality and solidarity, then Wells’ Victorian heritage must be discussed in the round, not just T. H. Huxley, who figures so largely here.

These, however, are very minor criticisms. Inventing Tomorrow is a magisterial book, the kind of book which ought to spawn a host of other more focused monographs. Beautifully written and persuasive throughout, I for one share its enthusiasm for Wells as a thinker of great import and see Wells also as a writer who provides a model for what literature can and perhaps ought to be.