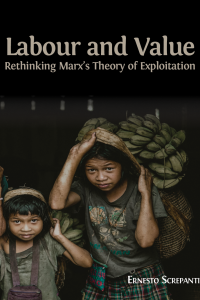 Screpanti’s Labour and Value is an examination of what he deems to be the manifest and insurmountable flaws of Marx’s value theory.

Screpanti opens with a discussion of whether Marx had an ethical opposition to capitalism. His view leans strongly on Althusser’s separation between the young-Hegelian, naive, ethical opponent of capitalism, influenced by Feuerbach (14), and the older, wiser and more cynical scientist who was “not interested in a moral condemnation of the abuses of capitalism” (16). Screpanti points out that Marx “argues that capitalists extort surplus labour in the production process” (16). Extort means to obtain from a person by force, intimidation, or undue or illegal power, while the extraction of surplus value is exploitation. Notwithstanding, Screpanti counterposes normative and descriptive (moral and amoral) connotations and makes an “unequivocal choice” in favour of the latter (17).

Screpanti provides an explanation of the relationship between value and abstract labour in Marx, and considers that for Marx “all surplus value is a result of exploitation” (20). But, “Marx the scientist does not aim to demonstrate the existence of exploitation. He endeavours to explain it” (Screpanti’s emphasis, 20). If the existence of exploitation cannot be demonstrated, how can it be explained? Sidestepping this dilemma, Screpanti explains that in his view “labour values are variables of a purely technological nature” (21) that ““do not play any role in determining the production of surplus value”   theory only serves as an instrument of measurement” (22). The theory of value does not determine the social relations which explain the production and distribution of value and “in fact, labour values are determined independently of profits. They hold in a non-capitalist economy and are therefore unsuitable for measuring surplus value” (22). Not only do labour values not determine the social laws that determine the nature of capitalist production, they are not even unique to capitalism but exist generally. They are both nowhere and everywhere.

Marx asserts that in the exchange of twenty kilos of coffee for ten meters of fabric labour is the common factor to the exchange. Screpanti insists: “the fact that 20 kilos of coffee exchange for 10 meters of fabric does not imply that the two commodities have some substance in common” (32). Certainly, taken in isolation, this relationship is merely incidental, but Marx’s example was of capitalist manufacturing production, with repeated, innumerable, essentially unlimited exchanges, wherein competition forces commodities to sell for their “natural price”.

Following Smith and Ricardo, Marx made the axiomatic, indeed tautological observation (tautologies are true) that assuming the production of these commodities was multiplied without any assignable limit, to paraphrase Ricardo, and that these commodities were not scarce or finite, then what determined this natural price was the substance that they all shared as products of human labour. This is basic set theory. If there is one set of natural products, and a subset of human products, then what differentiates human products from natural products is humanity. Humanity alone is the property that they all share. Therefore, it was the quantity of this socially necessary (i.e. not unnecessary as in wasted or superfluous) human labour embodied in the product, that determined its value. Screpanti nonetheless claims that “the identiﬁcation of the value magnitude as a quantity of embodied labour is a result of the restrictive hypothesis of zero proﬁts. Therefore, the proposition that abstract labour is, in general, the substance of value is not proved. It has to be assumed axiomatically” (32). Citing Chris Arthur, Screpanti claims that “Marx assumes it in the ﬁrst pages of Capital, in which the zero-proﬁts hypothesis is implied by the model of simple commodity production” (32). This is explicitly not assumed by Marx, who famously explains that wealth within capitalism consists of a mass of commodities, that is useful products, produced for sale. Profits, let alone zero profits, are not mentioned. Nonetheless, Screpanti sums up “the meaning of ‘creates’ in the metaphor of value creation by abstract labour is obscure and devoid of any scientiﬁc merit!” (34). Following Sraffa, Screpanti asserts that “knowledge of the technical coefﬁcients is sufﬁcient to determine labour values, while knowledge of the rate of exploitation is not necessary” (34).

Screpanti then describes what he understands by Marx’s theory of surplus value. The wage buys a worker’s labour power, or the use of their labour for a given period and activity and not the labourer themselves. This is what distinguishes the free labour of wage-slavery from slavery. According to Screpanti “in exchange for the wage paid to the worker, the capitalist obtains the establishment of a relationship, not a thing”. This relationship prompts the “utilization and appropriation of labour”. This process is “qualitatively different from the exchange of commodities and is its direct opposite” (42), but of course it is not. Labour power is a commodity. Marx’s theory of surplus value explains how, on the basis of the laws that govern the exchange of all commodities, surplus value is extracted. Commodities cost the amount of necessary labour to produce them, but some of that labour is unpaid. As only humans can own property, so only humans can be unpaid for their property. Thus, only human unpaid property, the amount of labour extorted from the producers in production, can be the source of surplus value. This explanation rests on the distinction between the reproduction cost of labour, the wage, and labour power, the thing bought. Screpanti refers to some of these points, but his discussion is confusing. He explains that “A commodity is a thing, an object produced by a subject using concrete labour” but of course a commodity does not have to be a thing; it may be a service, and so a relationship, or an object. He continues “Value, contrarily, is not a thing, and cannot be supposed to be created by a subject”. But if value is not created by a subject, how does the labourer embed value into the product during production? Screpanti maintains value “is an economic relationship among commodities, and a result of the social relations prevailing in productive activity” (54), but of course value is not a relationship between commodities, but people. The exchange of commodities is merely a vehicle for the alienated social relationship of people, not something separate from it.

Screpanti observes that “exploitation occurs when the value added for commodities is higher than wages” (54). Yet this does not account for “the production of surplus value” (54). According to Screpanti “surplus value is explained as the result of the capitalist’s ability to compel workers to attain a labour productivity higher than the wage” (54).  Yet wages do not have productivity while labour does. As earlier noted, assuming exchange is a one off, then only relative prices exist, so “the labour unit only serves as an instrument of measurement. Thus, one of the implications of the analysis […] is that the labour theory of value is not necessary to explain exploitation” (54).

Screpanti illustrates his argument in a perfectly competitive economy, with constant returns to scale, no scarce resources or fixed capital or joint production or luxuries or complex labour or growth. Screpanti’s model is a non-capitalist, utterly stagnant, slave society (80). Screpanti continues, “two equations may refer to an economy that produces a single good, in which case all symbols represent scalars and I=1” (80). Assuming away production (a labour process which physically transforms inputs into different outputs and so conceptually requires at least two goods, where the output is incommensurate and physically different to the input); Screpanti notes that this model can “also be interpreted as referring to an economy producing n commodities” (80), not one, but a definite and finite number of physically identical inputs and outputs. Assuming away free labour, capitalism and production, it is possible to demonstrate that labour values are superfluous. Who would deny it?

Screpanti notes that “Marx uses labour values to measure exploitation” and claims that he “often provides examples based on a single commodity” (80). This is quite wrong and indeed absurd. Marx never refers to a single commodity example, not once anywhere in Capital or anywhere else. Sraffians widely criticise Marx for exactly this mistake. But of course, it is no mistake, there are no physical constants in a real economy. When Marx refers to means of production or means of consumption, he is well aware that these are constantly changing, physically incommensurate quantities of physical inputs and outputs. Screpanti later explains that to simplify the model “assume that each sector produces a single commodity, a consumer good (sector 1) and a capital good (sector 2)” then the “equations represent two conditions of equality between demand and supply” (111). Marx apparently is damned if he does and damned if he doesn’t. He doesn’t. For Marx (and Leontief) the consumer and means of production sectors produced use value types, not single use values, with labour as the only scarce commodity.

Screpanti necessarily concludes that that “there is no need” for an “essentialist philosophy” to “determine value”, to “explain capitalist social relations”, or “the rate of surplus value” (95). He embraces the refutation of labour values attributed to Nobuo Okishio (95) and considers that the transformation of values into prices of production, which contradicts the requirements of linear algebra, means that “reproduction conditions in a capitalist economy cannot be determined in labour values” (111), when all it in fact means is that the transition itself was disproportionate.

Screpanti’s discussion of Marx’s theories of labour and value is their total rejection. Screpanti is hardly alone in this endeavour and there is not much original in this presentation. The problem Screpanti faces (as all Sraffians do) is the other worldly, paradoxically mystical nature of the assumptions necessary to achieve this mathematically correct (if not logically consistent) objective. As the Sraffians reject an external standard of value (to physical production), so they must find an internal one. This requires physical constants (or that inputs be physically identical with outputs) to allow commensurability and so measurement. As production is a process which physically changes inputs into physically different incommensurate outputs, this assumption precludes all actual production. As physical constancy requires one, or a finite quantity of products, so relative prices must be fixed, so that one commodity may be substituted for another, such that relative prices become absolute prices. As capitalist production is a process that constantly revolutionizes physical prices, this assumption precludes capitalist production. As the cost of production is the quantity of physical inputs destroyed (although somehow not destroyed) in producing the output, and as surplus is the difference between costs and prices, this identity precludes all actual profits. As class society requires exploitation, this precludes class society. As there must nonetheless be a surplus, so surplus appears without equivalent from nothing. This assumption precludes material reality, the conservation of energy, and the physical universe.