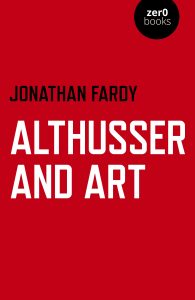 The focus of Althusser and Art is the first phase of Louis Althusser’s intellectual project – the earlier ‘theoreticist phase’ – concerned with the theorisation of Marxist theory. For Althusser, Marxist theory had to take itself as its own object. This project to renovate the political practice of the French Communist Party by renewing Marxist theory is evaluated negatively by Fardy. Althusser is charged with fetishizing the corpus of Marx’s work, of failing to conceive theorising as a creative practice and of reaffirming a suffocating division of labour in which a theoretical dictatorship reigns over political practice. Althusser and Art returns to Althusser’s theorisation of theory and, although it isn’t actually a study of Althusser’s marginal writings on art, it discusses in some detail his essays on Carlo Bertolazzi’s 1893 play El Nost Milan and the painting of Leonardo Cremonini. It introduces a theoretical legacy of Althusserianism in the work of Korsch, Macherey, Rancière and Laruelle. This legacy becomes the search for an aesthetic form that could surpass the division of theory and practice.

Althusserianism was an intervention in the debates of Marxist philosophy in the aftermath of Nikita Khrushchev’s so-called ‘secret speech’ delivered at the Twentieth Congress of the Communist Party in February 1956 and the Sino-Soviet split in the communist movement. Khrushchev condemned ‘the cult of the individual’, the transformation of Stalin into a ‘superman’, exposed the reality of Stalin’s regime, and initiated a policy of de-Stalinization. As Fardy outlines, Althusser questioned the theoretical value of the socialist humanism espoused by Khrushchev and identified an ‘epistemological break’ in Marx’s intellectual development. Althusser divided Marx’s thought into two distinct periods and The German Ideology (1846) becomes a symptomatic text of a new theoretical consciousness. Althusser described the consciousness of the young Marx as enslaved; it was Marx’s experience of real history that allowed myths that presented themselves as truth to be elbowed aside.

Althusser’s definition of humanism as an ideology was pivotal to this rupture with a borrowed Feuerbachian problematic, that is, the internal ideological unity of a text. An ideology is characteristically unconscious of its own unspoken presuppositions or buried problematic, or, that problematic itself is unaware. So, Althusser distinguished the ideological young Marx from the scientific mature Marx and from his perspective, Khrushchev’s call for a return to humanism was a call to return to ideology rather than scientific social theory. The rupture in Marx’s thought was the basis for a scientific theory of history and society: it was the radicalism of Marx’s work that the communist movement had abandoned. The ‘end of Stalinist dogmatism’ hadn’t restored the integrity of Marxist philosophy, although it had allowed for its investigation to be resumed. Fardy outlines the critique of humanism and historicism in early Althusserianism as well as Althusser’s original contribution to Marxist theory, namely, a theory and method of ‘symptomatic reading’ that discovers in a theoretical text the symptoms of an invisible problematic or ideological baggage.

Fardy reconsiders Althusserianism as an aesthetic theory and compares it to the self-reflexive modernism of Brechtian theatre: Althusser’s theory is Marxist, not merely in what it proposes analytically, but in its actual form. Fardy draws on Badiou to explain theory’s aesthetic character. Theory works through the materiality of language and is performatively achieved – a theoretical practice is axiomatically aesthetic because it is ‘structured by a verbal performance’. Theory is produced by an enunciation, through the medium of words. Althusser valued art because it makes us see what Fardy calls ideological ‘invisibilities’. An ideology is unconsciously lived but as the raw material of theatre or painting, it can become visible as the object of knowledge. An artwork can make visible or bring to light the invisibility of ideology. Althusser distinguishes art from both ideology and knowledge: art can make us perceive the reality of the ideologies from which it was born and to which it alludes. For Althusser, art can distance or alienate ideology in ways reminiscent of Brechtian aesthetics, but it does not provide a knowledge of ideology, which would be the domain and responsibility of Marxist theory. Fardy calls theory a ‘field of visibility’ and a ‘field of sighting’ and suggests that it cannot, ultimately, be distinguished from the special insight of an individual, which Althusser wants. Fardy does think that Althusser’s aesthetic theory introduces a schematic division between artists and theorists which is ideological to its core. Althusser reproduces the distinction between manual and intellectual labour and aesthetics and epistemology. But Fardy wants to see Althusserianism as itself aesthetic, operating in a similar way to Brechtian distanciation, which cancels out the very division of labour Althusserian theory substantiates.

Fardy turns to the theoretical legacy of Althusserianism in the work of Rancière and Macherey. He outlines Rancière’s break with Althusserianism on the grounds that it is ultimately conservative and static, it reduces workers to a kind of state of nature, it denies the capacities of the dominated and reproduces the capitalist division between mental and manual labour, an accusation also levelled by E. P. Thompson. According to Fardy, Althusserianism amounts to a theory of ‘the police’, rather than of politics, which intervenes in and involves a redistribution of the sensible of the occupations and activities that define and arrange our experience. If politics involves ‘an emancipatory rupturing of the ordering of space, visibility, and speech’, the police is the maintenance of the status quo and a kind of common sense that abuses protesters as immature dreamers or dangerous fools. According to Fardy, Althusserianism legitimates the police in its reproduction of the reigning distribution of the sensible, while Rancière offers a style or writing or aesthetic that could ‘disallow the reproduction of a policed order of thought’.

Fardy turns to Macherey’s A Theory of Literary Production (1966) which parallels developments in postwar literary theory, especially the deconstruction of Paul de Man: the question of what it means to read are equally crucial to Macherey and de Man. Macherey rejects empiricism and argues that literary theory produces its own object of knowledge. Fardy criticises Macherey’s idealism and his affirmation of a hierarchical division between writers and theorists. Fardy understands this as a ‘political limitation’ of Althusserianism and its legacy, but Marx elaborates a theory of theory in his remarks on the method of the critique of political economy in the Grundrisse (1857-8), which, following Fardy, could equally be considered idealist and elitist (the idea that theorists know what the object is and not (cultural)) producers.

Althusser’s insistence on the autonomy of theory, Fardy argues, was necessary in the struggle against philosophical dogmatism but it functions to reaffirm hierarchical divisions. Althusser is unable to overcome the dialectic of theory and practice and substantiate a properly revolutionary praxis. But a ‘radical integration’ and therefore a redistribution of the sensible can, Fardy claims, be achieved through the medium of the aesthetic. For Fardy, the aesthetic bridges the theory and practice divide but it is a principle of demarcation; it divides different kinds of writing and distinguishes cultural practices from ordinary ones; it safeguards a realm independent of instrumental demands or practicalities. Fardy’s example of Marcel Duchamp’s readymade Fountain (1917) suggests that he sees the aesthetic primarily in terms of pure form, of the experience of an object shorn of its ordinary aims or ends. As he writes, aesthetic objects are objects which ‘exist solely to be sensed’. This ‘liberal vision’ of art underwrites Althusser’s theoretical practice; he cannot see that the aesthetic can be practical and does not recognise the creative labour involved in fitting words together. Fardy takes the political slogan to exemplify the imaginative play involved in writing; the slogan is aesthetic because it bridges or articulates theory and practice and is a vital component of ‘aesthetic praxis’ and also a ‘weapon’. His example is the transformation into slogans of the quotations from Mao’s writings collected in the Little Red Book. The book, ‘small, clad in red vinyl’, becomes a badge of radical identity, ‘an aesthetic marker of solidarity articulated as an aesthetic practice’ or ‘an aesthetic-political object of revolutionary cultural practice’. Fardy does consider Benjamin’s critique of the aestheticization of politics as the essence of fascism and recognises that an aesthetic politics is not exclusively the property of the left. It is arguable that communism has no need to aestheticize, but it has done so in its history. But Fardy appears dismissive of Benjamin’s argument, calling it ‘utopian’, and he characterises Benjamin’s communist politicisation of aesthetics in terms of Socialist Realism rather than Brecht’s modernist strategies which Benjamin had in mind.

Fardy argues that Althusserianism was underwritten by ‘a disavowed aesthetic problematic’ and that the aesthetic structures Althusser’s theory of theory. Fardy’s approach is broadly deconstructive: Althusser seeks to demarcate art from theory, but this distinction is not always sustained in his writings. The aesthetic cannot be easily separated from theory and does not constitute an autonomous sphere as Althusser believed. But Althusser’s theory of theory remains valuable because it raises the question of the form of theory. The aesthetic, then, emerges as a way of surpassing the opposition between theory and practice in Fardy’s book, which usefully outlines conceptions and positions of Althusser’s writing. Fardy identifies the latent aesthetic strategies in Althusser’s early project and how theory might function aesthetically or be described as an art. He recognises the necessity and insight of that project, but it is arguable that Fardy needs to be more suspicious of the aesthetic as a problematic, and as a principle of articulation, how the aesthetic functions historically as a political force needs further, more sustained, interrogation.