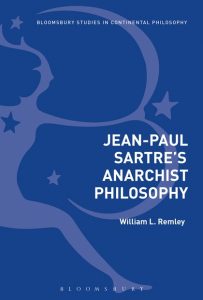 Iraklis Ioannidis, PhD, is a Teacher of Philosophy, Religious Studies and Classics at Dartford …

In an interview with Michel Contat, Sartre (1976, 155) confessed that he had discovered his “anarchist being” and emphasized that he “did not discover it through this term since the anarchy of today has nothing to do with the anarchy of 1870”. Remley’s objective, as set unequivocally in his introduction, is to phenomenalize this confession through a book whose thesis is that the political philosophy of Sartre “is anarchistic in nature” and is inspired by the emerging anarchism of the nineteenth century, most notably, by the anarchism of  P.J. Proudhon and M. Bakunin” (2).

Remley begins the first part of his book by clarifying the concept of anarchism. Despite the “varieties of anarchism,” they are all unified in their “attack on the principle of authority” (10). Following Clark, Remley claims that for a political thought to be fully and authentically anarchist (17), four specific elements must be apparent: (a) non-authoritarian society (b) criticism of existing society and institutions, (c) human nature, and (d) praxis. Thus, anarchist political thought theorizes “an ideal society [which] would be non-coercive and nonauthoritarian, [and which] comports with anarchists’ conceptions of human nature, and that it provides a strategy for action” (ibid.). These elements will be used again in the conclusion of the book where Remley will try to show how Sartre’s philosophy meets all of these criteria (206-211).

In the second part of the book, and after an introduction which summarizes the French political and social life of 1815-1870 (37-47), Remley delves into the anarchism of Proudhon and Bakunin. He provides an elaborate analysis on Proudhon who rejected most forms of government whilst proposing a sort of federalism aiming “to protect mutualist social practices, with the least amount of governmental authority” (72). In chapter five, Remley investigates the anarchism of Bakunin from his early philosophy to his most radical revolutionary theories.

Part Three, “Jean-Paul Sartre and the Twentieth-Century Anarchism: 1914-160”, is introduced with historical information on French political and social life during the period in question. There are only two mentions of Sartre in this section; one speaks of his opposition to the Radical-Socialist Party (96), and the other on his activism against the war in Algeria, a war which Sartre, according to Remley, “looked upon… in his usual Manichean manner as the difference between good and evil but now expressed in terms of humain and inhumain” (106; emphasis in original).

Following this historical introduction, Remley devotes two sections exclusively to Sartre’s early philosophy. The objective is to show how Sartre’s political philosophy started to take shape much earlier than previously thought “[d]espite conventional wisdom and de Beauvoir’s assertion that Sartre was not at all political until the Second World War” (109). Two essays in Sartre’s student years become the focus of Remley’s analysis: “The Theory of the State in Modern French Thought,” and “The Legend of Truth.” As Remley argues, these essays are important since we can trace the seeds of Sartre’s later elaborated conceptions of “individual sovereignty – freedom,” “group formation” and “power emanating from below [which] is, of course, an anarchist argument” (114). Next, Remley explores Sartre’s political positions in the late 1930s with a particular focus on the factors which influenced them – namely, phenomenology (115), epistemology (116), and dialectical materialism (118-123).

Starting the following section with Sartre’s “Materialism and Revolution” (126-128) and making references to Being and Nothingness and to the Notebooks for an Ethics, Remley explores Sartre’s views on revolution and the revolutionary man (126-127), violence (129-132), and class-struggle (132). While challenging some mainstream criticisms levelled against Sartre, Remley seems, in the end, to align with the mainstream idea that Sartre is an “apostle of violence” (241) since any action for Sartre involves some sort of violence (130; cf. 147).

Part Four deals with Sartre’s The Critique of Dialectical Reason which Remley reads as Sartre’s Political Manifesto (110; 139). Remley begins by exploring Sartre’s methodology of dialectical thinking (140) whilst placing a lot of emphasis on the notions of totality and totalization which “are critical to an understanding of the Critique” (142; 178). Following the latter’s structure, Remley analyzes, in turn, ‘need’ (143-144), what Sartre calls “the Third” (144-146), “scarcity” and “interest” (150-151).

Having analyzed these key notions, Remley attempts to explain Sartre’s philosophy concerning the “structuration of the social” (155). The latter is conditioned by the moments of (a) the series, (b) the collective group, (c) the group-in-fusion, (d) the statutory or pledged group, (e) the organized group, and (f) the institutionalized group. Remley rightly emphasizes that these moments are not stages with a linear progression but “they coexist as particular instances of a given social totality superimposed within a single totality” (ibid). Through an analysis of each moment (154-176), Remley illustrates how Sartre thinks social freedom can be achieved when the mass of individuals, isolated as they are when alone or in collectives, unify, or better yet, fuse themselves through a common project in an attempt to dissolve the bonds of enslavement which characterizes them in their passivity. Remley engages in an interesting discussion concerning this process which is conditioned on fear and terror. Remley’s comparison between Sartre’s example of the events in Bastille and the more recent events in Tahrir Square (160-163) helps to illuminate this process. While the group-in-fusion constitutes the possibility of achieving individual freedom which individuals do not have in all situations (157), Remley ably demonstrates how this possibility is negated when the group achieves its purpose, the threat recedes, and the group moves into becoming a pledged and, subsequently, an organized group.

In the following section Remley begins to investigate Sartre’s concept of sovereignty in terms of its disintegration as the group moves from the moment of being in fusion, to its being pledged and then institutionalized. The pledge introduces a new inertia and a new dialectic circle begins. After a group becomes pledged, distribution of tasks and hierarchization will entail conflict and thus formation of subgroups, all of which constitutes the first dialectical moment (181-183) of this pledged inertia (179). The second dialectical moment is the “purge” (183-184) which aims at the elimination of the subgroups which pose a threat to the pledge or unity of the group. As Remley stresses, following Sartre, “what is required is the creation of the institutional man who receives recognition by means of two opposed practices” (185). This first transformation of the degrading group will be followed by a second transformation whereby authority is born through a “regulatory third party” who “concentrates the internal violence of the group in the form of a power in order to impose his particular regulation on the group” (186).

In the last section of the fourth part, Remley explores Sartre’s analysis of sovereignty in societies and states. “Social individuals operate in seriality and would have to liquidate themselves as a series in order to assume the role of a large group” (192). According to Remley, Sartre views the state as neither legitimate nor as illegitimate. Yet, as an institutionalized group with sovereignty, it becomes an oppressive act of the ruling class against the rest (193). In the rest of the section Remley explores what Sartre calls “incarnation” in the process of the degrading group which institutionalizes itself in its attempt to unify itself through a third party which is authorized as sovereign over all its members – thus restricting their freedom anew.

Following the principle, the arche, that Remley has set in this undertaking of approaching anarchism, we can admit that he provides a valuable analysis. The latter, coupled with the unique historical information offered, allows the reader to form a coherent idea of the evolution of such anarchism, along with the activities of those who espoused it. In good faith, we shall remain with this arche and not venture to bring into the discussion the neglected, by Remley, problematization of anarchism and anarche as evidenced in Heidegger and Castoriadis – the writings of whom Sartre knew well, and which could illuminate further his (anarchical rather than anarchist) philosophy.

We shall, thus, only highlight a couple of concerns for further consideration. Remaining within the context of Remley’s analysis of Sartre’s ‘violence,’ a question arises as to why Remley chose to omit the relevant dispute of Sartre with Camus and with Bataille (for the latter see Derrida’s “Of Ontological Violence in Writing and Difference). New close readings of Sartre’s texts have shown us that Sartre is anything but an apostle of violence – since he nuances violence as only one of the possibilities of our relations with others and not an ontological structure or a necessity (Husson 2015, 157). As Noudelmann highlighted, Sartre’s attempt is to explore possibilities which are not going to be violent, be it dyadically or in collectives; conditioned neither by an external threat of/to freedom, which may be the original unifying reason of the group, nor by an internal threat invented in order to be purged for the group to remain in fusion (2009, 43-52).

Another concern is that Remley takes Sartre to espouse some sort of Manicheism (106; 147-148; 192). It is difficult to spin this when Sartre has claimed that Manicheism is “insoutenable [insupportable]” and must be denounced at all cost (Sartre 1943, 489; Noudelmann and Philippe 2004, 119; 256) – cf. The Anti-Semite and the Jew. Sartre constantly claims that we bring value to the world – just like some of the anarchists Remley analyzes yet fails to make this particular connection.

But, the most important concern is the attempt to read Sartre as conceiving some sort of human nature and as implying that we are not always free. This is required to fit Sartre into the arche of anarchism that Remley has chosen. But one need only ask: If Sartre allowed some ontology as human nature to slip in his philosophy would he not be in mauvaise foi as he himself wonders at the end of Being and Nothingness? Remley tactically avoids making links to Sartre’s phenomenology and this, perhaps, results in a complete exclusion of the issue of bad faith from his discussion. How else is it possible for an existence as consciousness or groups of consciousnesses to be authentically anarchical or, precisely, to choose an arche which aspires to ideally negate itself, i.e. anarchy, without acting in bad faith?

It is true that Sartre (1976, 155) avows affinities with anarchism as he remained philosophically – “toujours resté” – against authority unlike the individuals who put being/essence before their existence and, thus, freely remain in bad faith. Sartre may have been inspired by nineteenth century anarchism, as Remley argues, but, to categorize his philosophy in what we define as anarchistic today does not, perhaps, do justice to Sartre’s overall philosophical project or to his project as philosophy.