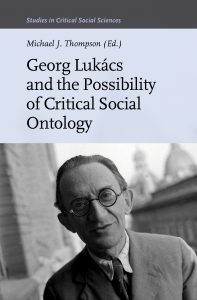 When Lukács died in 1971 he left unfinished some 1,500 pages of the Toward an Ontology of Social Being manuscript and it was not until the mid-1980s that the text appeared in a German edition. The Merlin Press brought out a reduced, three-volume edition of it in English (1978-80) which is now out of print; moreover, parts of what Lukács wrote remain untranslated. The aim of this collection of essays is to provide a much needed appraisal of the work as a whole and Thompson sets the scene by identifying Lukács as a thinker who, by bringing subjective agency into dialectical play with the material order of nature, challenges caricatures of Marx as reductionist and economistic.

In a 1971 interview with the New Left Review, Lukács outlined the latitude of his project: ‘My new work centres on the question of the relationship between necessity and freedom, or as I express it, teleology and causality’ (Mulhern 2011: 3). He sees this as entailing ‘the ontological interrelation of the two’, a consequence of the fact that labour, as the capacity to manipulate the environment, is constitutive of social reality. Labour works in and against nature, going beyond any biological mechanism by making choices about what to make and how to go about it. In doing so, it propels a teleological impulse that sets to work on ‘objective physical forces, which obey the causal laws of the material universe’ (Ibid: 4). Labour as the realisation of what Lukács calls ‘teleological positing’ (Lukács 1978a: 3) is, of course, a rephrasing of Marx’s honeybee metaphor about the architect building the cell in his mind before constructing it in wax.

Lukács was working from and developing Hegelian and Marxist ideas, as he did in his earlier History and Class Consciousness, where class consciousness, by freeing itself from the rule of capital, becomes the key to changing reality. The influence on him of Marx’s 1844 Economic and Philosophical Manuscripts, which he was able to read in Moscow before they were published, proved to be lifelong.

Georg Lukács and the Possibility of Social Ontology is divided into four parts. The three essays of the first part outline basic aspects of the work’s project, stressing the importance it attaches to goal-directed labour as the underlying force of human development. The last of these three, by Matthew J. Smetona, is the segue that illuminates the collection’s second part which focuses on the Hegelian-Marxist ideas fuelling Toward an Ontology of Social Being. Smetona sees Marx taking on board the radicalism of a Hegel who asserts the foundational role of contradiction. This makes reality, as Lukács puts it, a ‘concrete becoming’ and the present ‘a vanishing transition-point at the same time, posited and abolished between the future and the past’ (Ibid: 13).

Hegel sees ‘social being’ – which is a way of understanding Geist (spirit/mind) – as not just the result of individual acts and passions but as bound up with movements that transcend the intentions of individuals. Lukács welcomes this but regrets how Hegel’s insight became rigidified by a formalism and he complains of ‘the mental violation of ontology by logic’ (Ibid: 52). He rejects construing negation as a logical modality invested with an ontological force, situating it instead within the human world of activity and a historical process of becoming. Negation is linked with the acts of subjects – his example is early man’s choice of suitable stones and the rejection of unsuitable ones – whereby it becomes a mental tool in the human practice of changing reality. As Smetona puts it, intentionality has a material basis and he sees this as distinguishing the ontology of Marx from that of Hegel.

In the second of the four parts, Murillo van der Laan looks in detail at Lukács’ position in relation to Marx’s labour theory of value, finding it both ‘fruitful’ and ‘problematic’ (81). There are also qualified reservations in Andreas Giesbert’s essay on Lukács’ theory of alienation in his later work, finding it vague and lacking a benchmark. Michalis Skomvoulis concludes this part of the book, in a reading of Hegel’s account of essence and reflection in Science of Logic, by looking at what Lukács calls the ‘specificity of social being’ (Lukács 1978b: 9). This could be philosophically fascinating but the density of Skomvoulis’ prose makes it taxing to follow, let alone critically assess.

The third part of the collection focuses on similarities and differences between the late Lukács and contemporary theorists like Kuhn, Goldmann, Lakatos and Latour. Claudius Vallay adds Searle to this list for the constitutive role he gives to language. There is a lengthy exposition of Searle’s essentialist accounts of subjectivity and his presentation of the logical form of speech acts as a template for the way reality is built up through collective intentionality and what he calls ‘institutional’ facts. Vallay’s conclusion is that Searle is only concerned with the logic of thinking and the rationality behind phenomenological experience but not with reality outside of the individual mind. This is contrasted with Lukács’ position which finds labour and the teleology it embodies, not language per se, to be foundational in the development of human societies. Vallay makes the enticing claim that human practice ‘is based on knowledge of reality-in-itself ’ (215) but the use of such a heavily freighted Kantian term needs more unpacking than is provided. A more engaging insight into Lukács’ inquiry into the way human practices objectively shape the world but in ways that remain necessarily provisional, comes from the affinity Mario Duayer finds between Lukács’ ontology and the fiction of Borges.

The final part of the book, ‘Towards a Critical Social Ontology’, is also the strongest in setting out to redress the complaint of the editor that critical theory has, to its detriment, steadily moved away from its Marxist origins. The four essays in this part argue that Lukács provides an understanding of Marx that incorporates an ethics and notions of human agency in complex and nuanced ways. For Michael Morris, critical theory, failing to overcome its positivism, elevates epistemology above ontology, and thereby disallows philosophical speculation about how best to fashion human existence. What is regarded as vital is a return to the kind of Hegelian-Marxist synthesis, relating subject and object dynamically and historically, that preoccupied Lukács in his later years. Reha Kadakal argues along similar lines in seeing Lukács’ ontology as the only secure foundation for social theory.

Toward an Ontology of Social Being is a wordy text but so too are these essays, characteristically expressed in dry academic language. With a few exceptions, the attention given to textual passages from Lukács borders on the parsimonious. Quotations tend to be mostly short ones and what prevails is a sense that in their engagements with the text some contributors are content to keep them at a macro, rarely granular level. Occasionally, the impression created is that the writer is more closely acquainted with the theorists being compared and contrasted with Lukács than with Toward an Ontology of Social Being itself.

The concluding essay by the editor, Michael J. Thompson, is lucid and persuasive in praising the late Lukács’ contribution and fidelity to Marx’s ontology. The success of capitalism’s superstructure in reifying consciousness with respect to its priorities is testimony to what Marx and Lukács insist on: it is through human practice, the way we produce and what we produce, and the way we express ourselves, that humanity constitutes itself and the world. This makes up the teleological and processual side of our species-being for, while people and honeybees are alike in acting with intent for a desired result, people can choose from alternatives and different choices lead to different social realities. What Marx set forth in his early texts, the Economic and Philosophical Manuscripts and The German Ideology, built the foundations upon which Lukács was writing his late work.