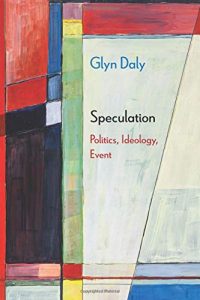 Usually, speculating means making things up or gambling on Wall Street. Within Speculation, Daly speculates in a grander sense. Speculation for Hegel avoids one-sidedness and sees the world as a ‘unity of opposites.’ As in bad marriages, Good and Bad, Yin and Yang, Real Madrid and Barcelona, each side cannot but refer to the other. Daly’s book stuns with its complexity, but its elegance lies in the simplicity of the speculative. Most pages polemicize and this review will limit itself to Daly’s overall proposal.

Daly begins by distinguishing speculation from understanding or dialectics. Let’s take the pandemic. For the rigid and analytical understanding, the virus is the ‘unseen enemy.’ We have a stiff pair here: us and it. Dialectical irony plays with this couple. People act as viruses and wise Nature immunizes every so often with plagues. But the understanding and dialectics see them as separate. Speculation revises them as one fractured body. For Hegel, nature and humanity are one; it is ‘Spirit at war with itself’. For a speculativist, the pandemic is total, an endless growth and spread, the cold intelligence of nature and capitalism finishing each other off. Yet against a literal totality, a Hegelian totality is incomplete, not ‘just as Substance, but also as Subject.’ A negative remainder will always make the whole unwhole. Perhaps from the Latin speculum – mirror – speculation is ‘the radical interiorization of all Otherness’ (xvii), not as narcissism like Jameson accused Hegel in The Hegel Variations, but rather what Lacan in Seminar VII called ‘extimacy’; that there is ‘something strange to me, although it is at the heart of me’ (87).

Chapter one lays out a metaphysics. For Daly, all our troubles began with Kant. Team Kant opposes subject and object, concept against concept. For example, most think of infinity as not here but out there, against our finitude. But for speculation, such infinity contradicts its concept. Infinity includes everything everywhere. To say we are infinite is equally absurd. Everything dies. Hegel and Daly articulate infinity as the unity of infinity and finitude. Infinity means finitude can never close itself; it is always open (to failure). In its turn, finitude is the infinite attempt to close the circle against the infinite threat. As with quantity, the same with quality. Similarly, some see ‘necessity’ and ‘contingency’ as total opposites. Either the world follows an iron law, or it’s all chaos. Again, the speculative frames the unity of ‘contingency’ as a failed form of ‘necessity’ and it is necessary for contingency to screw things up.

Chapter two addresses politics. For Daly, many theorists see power as ‘politics all the way down,’ all contingency, no driving logic. A random particular group fills the empty universal of power through ballots or bullets using any excuse or ‘identity.’ But some subversions may strengthen hegemony. For example, identity politics may subvert social relations, but a lot of identity politics really just strive for a place at capital’s table. And hegemony can be revolutionary, like capitalism is for Marx. This ambiguity emerges from the tensions between the universal and the particular. Ideologies owing to the Enlightenment particularize the universal. Liberalism universalizes bourgeois relations. Socialism universalizes equality through proletarian dictatorship. The Counter-Enlightenment universalizes the particular. Freedom, reason and equality are for masters only. Daly sees the infinite universal subverting and overflowing the particular, the proverbial straw breaking the camel’s back. The universal isn’t utopia, but the ‘concrete universal.’ It is the pangs of the old particular birthing a new particular.

The last three chapters on ideology, ethics and utopia are tied together under Hegel’s view of ‘reconciliation’ and based on psychoanalysis. Like finite infinity, ideology promises happiness and grapples with negativity by placing it on the Other. We blame the Other for stealing our enjoyment. Reconciliation challenges ideology by creating a restless relationship between Substance and Subject. First, it sees everything as external, turning Subject into Substance. ‘Reconciliation […] through coming to terms with the Other [not] “as they truly are,” but through an understanding of the Other as themselves pathetic entities that try to resolve inherent Otherness through an externalization of it’ (99). Second, the ethics involved reverses and morphs Substance into Subject. Using Lacan’s pair of repressive desires (to please the Master) and death drive (to please me), Daly argues that ideology enslaves desire through belief, deferral and blame which the anti-social drive breaks by ‘traversing the fantasy’ of universal alienation, the realization that there is no transcendence to please and obey. Drive sees ideology for what it is, a scam, and runs with it minus the belief – an ‘emotional atheism.’ ‘What is gained as a result of traversing the fantasy is nothing substantial, but rather an understanding of the emancipatory potential of movement within the field of the fantasmatic’ (131). Daly’s speculative ethics frames ‘an ethics of desire in the mode of drive’ (133). Drive realizes desire, ‘the subject no longer yearns for the lost object but instead makes herself an object’ (133), owning its ‘extimate’ fantasy and excess without exteriorizing them. And through drive’s extreme subjectivity (to desire myself), I recognize myself in others and the others in myself. A similar dynamic occurs regarding good and evil. Evil is more foundational than good. Ontological evil is the Subject as pre-moral negative drive, severed from Substance. ‘Evil […] is constitutive of both good and evil—the choice between good (willing the universal) and evil (willing the particular) is made possible as a result of this existential evil’ (138). The good, as desire, exteriorizes as Substance, emerging later ‘as a fundamental gesture toward the universal’ (139). Evil in turn remains as excess against all established universality making possible new forms of good. Daly ends with a utopia grounded on Hegel’s ‘speculative Good Friday.’ The speculative state is a polity abandoned by God that realizes that ‘the highest totality can and must achieve its resurrection solely from this harsh consciousness of loss’ (176). Our political theologies secularize and divide abstract natural rights (an external infinity) and concrete positive rights (an internal order). What is resurrected in Daly’s utopia is their speculative unity, ‘[a] state that does not seek verification outside itself […] rather, it is explicitly self-grounding in the very process of embodying its abstract principles in concrete terms’ (173).

Some observations on a dazzling work. In two key instances, Daly doesn’t follow through with his own speculative method. First, the case of Hegel against Kant is overstated. The historical Hegel was deeply Kantian and Aristotelian. Hegel excelled in preserving and cancelling the two sides (necessity and contingency, natural law and historicism, idealism and realism, analysis and totality). Second, Daly’s Hegel is heavily filtered through Lacan and Žižek, stressing negativity. In the Logic, Hegel called dialectics ‘negative reason’; yet skepticism and nihilism are close at hand if not followed by the speculative reconstruction. Dialecticians like Adorno or Žižek notably lack a positive program, seeking shelter instead in high modernism or Red Terror. Yet Hegel’s own words for speculation are ‘positive reason’, with their ontological and practical implications. From the early writings to the mature lessons, Hegel detected in love and politics unmatched speculative praxis. The separate Other still remains but deprived of all foreignness. It can be said that Daly treats this positive aspect too late. Finally, for all his speculative radicalism, Hegel was a political moderate. Marx and Nietzsche were political radicals but thought more ‘conservatively’ – non-speculatively. The challenge, if one wishes, is how to be radical in both.