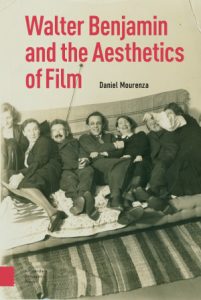 Daniel Mourenza
Walter Benjamin and the Aesthetics of Film

Hanno Berger has a PhD in Film Studies from the Free University of Berlin. He currently holds a …

In his book Walter Benjamin and the Aesthetics of Film, author Daniel Mourenza aims at taking a fresh look at Benjamin’s writings on film. Since the Benjamin which Mourenza presents is a thinker who operates strongly within a Marxist framework, it is safe to say that the outcome of his endeavor is a distinctly Marxist film theory. In order to reach his goal, Mourenza not only focuses on all different versions of Benjamin’s famous essay ‘The Work of Art in the Age of Its Technological Reproducibility’, but also takes into account Benjamin’s ideas on film that are ‘scattered across articles, essays, notes, and letters’. Mourenza’s thesis is that they all ‘form part of a single project: to defend film as a privileged medium in which humans could rehearse a better relationship with technology’. This formulation already hints at the bigger project which lies behind Mourenza’s book. He wants to show that ‘Benjamin’s writings on film are reflections of much broader historical and political phenomena’ (16). A crucial step to link Benjamin’s writing on film with these broader phenomena is to understand ‘aesthetics’ with Benjamin not as ‘the philosophical considerations of beauty’ (19), but more broadly in the sense of ‘aisth­­ēsis’, i.e. in the sense of perception, a ‘perception in which all the senses are employed and impressions are left on the body’ (61). This means Mourenza wants to look with Benjamin at the way in which cinema and technology alter our perception and ‘the sensorium through which humans experience the world’ (17). This in turn leads the author to focus not just on what Benjamin wrote about films themselves, but also and more extensively on his conception of the spectator and the audience, or rather, the transformation of the relationship between the audience and the artwork that he develops. Mourenza himself describes the aim of the book as follows: ‘to provide a comprehensive framework for understanding Benjamin’s theories on film while, at the same time, illuminating the philosophical and political project that underlines them’ (17). He indeed fulfills this goal with his book.

The book is structured into five chapters. The first presents the crucial theoretical notions which Mourenza needs in order to develop his version of Benjamin’s aesthetics of film. It is surely the most important chapter of the book, and it is also the strongest. Here he lays the groundwork by defining crucial terms of Benjamin’s oeuvre that circle around the concept of ‘Anthropological Materialism’. At the center of this concept lies the body – the individual, and the social or collective body and how these bodies and its perceptions are influenced, altered and enhanced by technology. Mourenza stresses that in Benjamin’s writings technology is not supposed to be used in order to control and dominate nature, and in consequence humanity; it is not supposed to be exploitative and instrumental but in service of nature and humanity. Cinema plays a crucial part in that project. This is mainly due to the process of innervation, a concept referring to ‘a collective process of stimulation which facilitates a process of technological adaptation’ (46). It involves a two-way process: a bodily understood reception of a rush of energy and a release of tension. Such an innervation requires not a contemplative but a distracted audience which, according to Benjamin, can be found in the movie theaters. In the cinema, understood as ‘Training Ground for the Senses’ (53), the audience learns to handle living in modernity and thereby develops a more playful handling of technology. As Mourenza claims with Benjamin, this handling of technology ultimately (this is its revolutionary implication) will not be in service of the interest of capitalism but of humanity.

The second chapter deals with Benjamin’s texts on Soviet films. Mourenza combines a rendering of these writings, Benjamin’s praise of Eisenstein’s Battleship Potemkin (1925), with an analysis of the critical view the philosopher had on the use of technology in Soviet society: a use which, as in capitalism, was not focused on the liberation of humanity. The third chapter examines German cinema of the 1920s and 1930s and contextualizes this cinema within Benjamin’s broader analysis of fascism, its genesis and its aesthetics, considering especially his thoughts on the writings of Ernst Jünger. In this chapter Mourenza doesn’t confine himself to what Benjamin wrote but also attempts analyses of his own, notably of Metropolis (Fritz Lang, 1927) and of the films by Leni Riefenstahl. Chapter four is concerned with the role of Charlie Chaplin, and especially the melancholy of his character, in Benjamin’s writings. Here Mourenza identifies a connection between Benjamin’s notion of allegory and Chaplin. He examines this connection with the help of Brecht’s concept of Gestus and compares Chaplin’s films to the writings of Franz Kafka. The fifth chapter is devoted to the ambiguous role Mickey Mouse played for Benjamin. Mourenza uses the lens of the Benjamin’s positive notion of barbarism on the one hand and the correspondence between Benjamin and Adorno and Horkheimer on the other to carve out this ambiguous role. Here the drawings of J.J. Grandville and the ideas of the utopian thinker Charles Fourier, or Benjamin’s thoughts on them respectively, serve as important points of reference with which Mourenza compares Disney films. The book ends with an (alas) very short chapter on Benjamin’s belated actuality. Here Mourenza claims that since Benjamin’s aesthetics of film had been developed mostly in interaction with silent movies, it is therefore hardly compatible with sound film. However, according to Mourenza, Benjamin’s idea of a medium as a prothesis of the human body can be very well put in relation to the theorization of digital images and the contemporary debates on post-humanism. Unfortunately, Mourenza here confines himself to some sketchy remarks. An elaboration of his thoughts on these issues would have been worthwhile and interesting.

Mourenza’s theoretical elaborations are very strong and his emphasis on an embodied spectator in Benjamin’s writings is especially productive. He manages to develop a coherent theory of his aesthetics of film with implications far beyond the area of film studies and valuable insights for an emancipatory political transformation of society and the role technology is able to play in such a transformation. Benjamin’s ideas are carefully contextualized within the historical discourses surrounding him. Mourenza always keeps a watchful eye on the intricacies of the philosopher’s use of the German language and the challenges this implies for a translation of his ideas into a different language. With its clear and concise language, the book can also be regarded as a good introduction to Benjamin’s thought in general.

Unfortunately, the author cannot hold up with the high quality of his theoretical elaborations when it comes to analyzing individual artworks. The relation between theory on the one hand and the films on the other does not seem to be thought through. When writing about individual films, Mourenza often does not take into account the theoretical groundwork that he himself developed. His analysis of Fritz Lang’s Metropolis, for example, ignores almost completely the staging of the movie and consists solely of an interpretation of the film’s plot (and you indeed do not need the complexities of Benjamin’s aesthetics of film to come to the conclusion that the plot of Metropolis is reactionary, as Mourenza does). This problem also becomes evident when Mourenza affirms a thesis explaining the success of Chaplin’s movies in Germany as follows: ‘in the Germany of unemployment and inflation of the 1920s and 1930s, much of the audience could identify with that vertiginous social decline [the decline which becomes visible in the clothes Charlie’s Tramp is wearing]’ (144). Such explanation ignores that Benjamin’s concept of a distracted spectator, his emphasis on bodily and not psychological reactions among the audience, and Brecht’s theory of Gestus with which Mourenza tries to grasp Chaplin’s acting in the rest of the book, are at odds (if not completely opposed) to the idea of ‘identification’. It could be argued that Mourenza here talks about a historical audience whereas throughout the rest of the book he talks about a theoretical audience – with the problem of incongruity and inconsistency remaining.

A similar problem shows up in Mourenza’s account of fascist films, but this time the problem is to be found already within Benjamin’s work. Mourenza writes: ‘[t]hrough the guidance of the camera, the Nazi mass rallies acquire an aesthetic, monumental quality’ (129), thereby referring to Benjamin’s famous slogan about the aestheticization of politics promoted by fascism. However, this slogan still refers to the ‘classical’ understanding of aesthetics and is at odds with the idea of aesthetics as aisth­­ēsis. A discussion of this tension does not occur in Walter Benjamin and the Aesthetics of Film, even though its author occasionally refers to Jacques Rancière, who would be a fruitful point of reference for such a discussion. For Rancière, the idea of aesthetics as aisth­­ēsis is crucial as well (as Mourenza himself aptly notes on p. 61, footnote 145). Instead of discussing the tensions between fascist films and Benjamin’s theory, Mourenza simply calls these films an ‘abuse’ (148) of technology. Since these films were able to deploy the cinema so easily and successfully for their ends, the question remains if they can be dismissed as simply a misuse and violation or if they might not pose a bigger threat to Benjamin’s theory. In general, Mourenza mostly presents and carves out Benjamin’s ideas and only occasionally debates them. A more elaborate or in-depth discussion could have been beneficial from time to time. This also goes for the ties between Benjamin and Marxism – ties that the author seems to be taking for granted. The question of how straightforward these ties were composed in the different stages of Benjamin’s life might deserve a broader discussion since it has been argued that ‘Benjamin probably was the most peculiar Marxist ever produced by this movement’ (Arendt 1970: 163).

Yet, these points of criticism do not diminish the merit of Walter Benjamin and the Aesthetics of Film. And the hope formulated by the author that his book ‘will inspire new approaches to Benjamin’s oeuvre while, at the same time, stimulating further research that takes his film aesthetics as a point of departure for more contemporary trends in Film Studies’ (25) deserves full agreement.