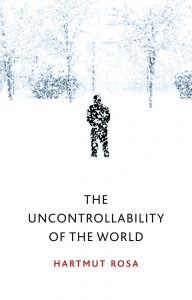 Hartmut Rosa
The Uncontrollability of the World

To children returning from vacation, the home is new, fresh, festive. But nothing has changed in it, since they left. Only because the duties were forgotten, of which every piece of furniture, every window, every lamp is otherwise a reminder, does the Sabbath peace once more repose.

Political thinkers on the left have surveyed the potential of several human affects for political mobilization. Some stress the need for hope (Bloch), others call for indignation (Hessel), still others emphasize the merits of working-class hatred (Tronti). In this long list of political affects, Hartmut Rosa mentions one not often discussed among leftists: longing. He begins The Uncontrollability of the World with the invitation to return to our childhood and remember the first snowfall on a late autumn day. As children, we experienced the snow with utter bliss, like an unexpected gift slowly wrapping the world in magical delight and playful fun. One might today try to recreate this feeling artificially by going on a skiing holiday, but such attempts almost never succeed. When we hurry through the snow on the way to work, we have lost this gracious feeling of surrender to the elements. We have to get to our job on time or risk getting behind on work or worse; and yet, we long for the snow to return every winter.

Rosa calls these moments of primal connection to the world ‘relations of resonance’. According to Rosa, people feel most at ease when they neither have the world under complete control nor are entirely at its mercy. Too little control over our surroundings leads to panic, but too much control makes the world appear dull and uneventful. In between complete control and utter uncontrollability are moments where subject and object spontaneously echo each other’s concerns without one dominating the other: two lovers on a date suddenly discover how well they ‘click’, a skilled artist surrenders to the quirks of her craft, a man goes on a walk carried by the warmth of the early autumn sun. Subject and object are, as it were, immediately in tune with each other. Such brief moments make us remember that life is worth living.

Rosa, however, diagnoses that the logic of modernization runs against relations of resonance. Recalling Adorno and Horkheimer’s seminal thesis from Dialectic of Enlightenment, Rosa claims that the drive toward control propels the project of modernity, but threatens to unravel into its opposite. Modern society equates progress with expanding its instrumental control over nature. It regards the world as a series of ‘points of aggression’, i.e. objects that resist human projects and thus have to be aggressively put in line. We confront the human body, for example, less and less as a natural given we have to learn to accept. Modern individuals rather experience their own bodies as open objects made to fit their own desires. They, for instance, buy smartwatches to incessantly track and optimize bodily metrics. Our bodies are no longer a condition into which we are thrown, but an object of relentless optimization. Instead of submitting to the vagaries of nature like a fate enforced from above, modern humankind has mobilized science and technology to master its own fate and determine its own future. Tremendous progress has been achieved through this deployment of instrumental reason.

Nonetheless, these advances come at a cost. Once modern society privileges the drive toward control, it depends on the incessant further expansion of controllability. It has to control more and more of the world to keep itself afloat. The capitalist economy, for instance, can only survive if capital accumulates. Technological and organizational innovations have to sustain economic growth ad infinitum. This requires ever greater degrees of control over the labour process, consumers, transportation, etc. The less is left up to chance, the more capital can be accumulated. Like Adorno and Horkheimer, Rosa observes that the overheating of the drive for control ultimately reverts into catastrophic forms of uncontrollability. The exaggerated use of instrumental rationality eventually produces situations that are utterly irrational. The necessity of capital accumulation, for instance, not only optimizes the production process, but also fosters cycles of economic crisis, climate change, mental illness, etc. The social systems put in place to control nature eventually become themselves uncontrollable. In our modern quest to dominate the world, the world we have created has come to dominate us. One cannot, however, simply reject the drive toward control and thereby evade its negative consequences. Dismissing the need of economic growth would entail tremendous losses, predominantly for the poor working classes. The drive for control puts modern society in a gridlock: it cannot keep up with expanding control without fostering catastrophic uncontrollabilities and yet rejecting the drive toward control could be equally catastrophic. Nothing but a complete overhaul of modernity and how we relate to the world would suffice to escape the logic of escalating control.

It is this conundrum that, according to Rosa, nurtures the longing for resonance. Though most of everyday life is administered under the drive for control, brief moments of harmonious immersion in the world demonstrate that life could be different. We see the snowfall in early winter and remember a time when we did not curse it for the traffic jams it causes. There was a time when we felt grateful and excited for the unmerited gift the world had granted us, and we ache to go back to those days. Capitalism has long caught on to this longing and offers its satisfaction through commodity consumption. We go on holidays in secluded areas, partake in yoga sessions and watch nostalgic movies and television series. These industries displace the longing for resonance toward the acquisition of commodities that promise to bring us back to simpler times, even if that promise usually remains unfulfilled. These commodities offer peace with the world but, in reality, only present a temporary ceasefire in the struggle for control. Once the yoga session is over, life returns back to its normal hectic rhythm. Real resonance requires a completely new social logic beyond the wretched dialectic between control and uncontrollability. Instead of tragically trying to put the world under our control, we ought to allow ourselves to ‘simply let life happen’ (60). Resonance occurs when we allow the world to affect us in ways we do not control and react to this call in an open-ended dialogue with the world until our subjective rhythm of life coincides with the rhythm of the world. When we succeed, we experience our surroundings not as a series of ‘points of aggression’, but as an uncontrollable gift we have in no way requested or demanded but nonetheless gratefully accept. In a resonant relation, we gratefully accept this gift of the world as an everyday miracle.

Rosa’s notion of gracious acceptance of the world as it is, however, leads into politically problematic terrain. There is something conservative about the prescriptions to ‘simply let life happen’ and joyfully accept our fate as a gratuitous gift. This becomes most apparent when Rosa discusses biomedical debates like abortion, contraceptives and in vitro fertilization. Technological advances in medicine have significantly helped people to plan their lives. The drive for control commands that we try to optimally realize potential parents’ autonomy. Infertility, for example, subsequently appears as a point of aggression that is to be overcome through scientific research and technological advancements like in vitro fertilization and hormonal treatments. Having children or remaining childless are no longer a fate one must accept, but a conscious choice. This seems like definite victory for human progress, even if it entails the loss of the ‘mystery of childbirth’. Cultivating uncontrollability and resonance would here entail the return to pre-technological times where children were an unplanned and unplannable blessing. But do we really feel that nostalgic for the times when things were entirely left up to chance?

Rosa evades this criticism by pointing out that he is only making a sociological observation, not a political argument. Rosa does not take sides in the tension between control and resonance, but merely shows that this tension permeates many of today’s political debates. We might wonder, however, whether we cannot be more ambitious in the politics of resonance. Rosa mentions that the term ‘resonance’ derives from Christian theology where it relates to the notion of ‘grace’. Developing the latter concept could allow for a more emancipatory concept of resonance. From a Christian perspective, humankind cannot establish its own salvation through mastery of the world. The drive for control does not deliver redemption. Human beings need divine grace, a gift that befalls them from above and that they can only gratefully accept. Rosa does not, however, distinguish between two opposing notions of grace. In the fifth century, Augustine established official Church dogma arguing that humankind was so depraved due to original sin that it was itself incapable of acquiring salvation. Humankind naturally tends toward evil, so God must intervene to save humanity from itself. Similarly, a conservative might read Rosa as suggesting that modern humankind is so corrupted by the drive toward control that it needs to submit to some higher uncontrollable fate to experience relations of resonance. Contrary to Augustine, however, the heretic theologian Pelagius argued that humankind does not suffer from original sin at all. For Pelagius, God did not have to intervene to save humankind from its propensity toward sin, but had granted human beings free will to autonomously choose the good and combat evil. Likewise, we should specify that the drive for control is not an inherently depraved human inclination. The emancipatory potential of mastering nature is still valuable. The drive for control is not a sign of original sin, but an opportunity to choose between good and evil. Many lives depend on our common capacity to master nature, so we carry the responsibility to use the drive for control to combat evil and establish the good. If we refuse to put the drive for control to good use, we will remain plagued by the longing for resonance. But if we learn to employ it wisely, redemption might not be too far off.