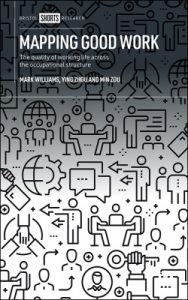 Even before Adam Smith’s depiction of work in a local pin factory and Friedrich Engels’ seminal work The Condition of the Working Class in Britain in 1844, many people including workers in Blake’s “dark satanic mills” have been wondering why work is so bad and what good work – if at all possible under capitalism – would look like. Mapping Good Work has been one of the latest and insightful contributions to this debate.

In six chapters filled with statistics, definitions, graphs, 24 figures, 17 tables, methodological debates, etc. Williams et al. start their elaboration by defining good work, arguing that it offers a ‘realistic scope for development and fulfilment as well as being fair and decent’ (1). Unfortunately, a deeper – in fact, any – discussion of what the terms development, fulfilment, fair, decent actually mean is absent. The expression good work appears to be choking on empirical discussions with little interest in interpretations, and virtually no interest in emancipating workers from capitalist domination.

Unavoidably, good work remains inextricably linked to the so-called free labour market. There are good jobs and bad jobs or, as the three authors say: ‘lovely and lousy jobs’ (9). On this the trio note that there is not one unified or single labour market but a segmented jumble of labour markets. Labour market segmentation means that the labour market is divided ‘along occupational lines’ (9). Whatever that means? For example, the “labour” (!) market for CEOs is different from that for delivery drivers. Correctly, Williams and his team argue that ‘one’s occupation relates to one’s economic life chances [and] quality of work life chances’ (7). One might therefore think of at least four different ways of looking at good work (14): Orthodox economics believes that good work is defined by pay; institutional economics believes in status and the quality of jobs; sociologists prefer control over the job; while organisational psychologists favour autonomy and wellbeing. A fifth series of questions would revolve around for whom and what work is good for: the individual, the community, the nation or the world; to make everyone feel wanted, useful and/or valued?

Whatever the perspective, the three authors argue correctly that good work is defined by ‘multiple dimensions’ (30). In a survey that frequently evaluated good work during the last twenty-five years asking 20,000 people in the UK, the most important aspect of work – ranked as number one – has been I ‘like doing it’, followed by ‘job security [and] relations to managers’ (33). At number seven, people mention ‘pay’. In other words, orthodox (i.e., neoliberal) economics is somewhat misguided in focusing on pay. The three authors then note: ‘finding work itself enjoyable [is] the most important factor overall. Thus, the model of work being a trade-off effort for compensation appears to provide a very misleading picture of what matters to workers’ (34).

In sharp contrast to this rather common delusion of neoliberalism, for many ordinary workers, however, ‘work itself’ is the problem. Why? Because it is work – the physical labour, the time away from family and relaxation – itself that makes them unhappy and dissatisfied. Ever since Hegel (Klikauer 2012, 2015, 2016) we have known that work under capitalism is linked to alienation. Roughly speaking, alienation comes in four forms: (1) from the product of which the worker only sees fragments, never the whole picture; (2) from the tedium that comes from producing things of no intrinsic value or meaning; (3) from humanity as such because what the workers labour at keeps them from understanding or enjoying what others do who possess, caress and consume what is made; and finally (4) from one’s essential humanity– the fulfilment of one’s conscious and unconscious potentials and from collective associations with other workers doing parallel jobs elsewhere—but certainly alienation  from the elite people who benefit from their labour and don’t recognize that such products are made by human beings who do not understand why they are doing what they do.

Unfortunately for Williams and his team, no amount of data analysis and conceptual work can change this. As long as work is defined by capitalism, work as such comes with alienation in one form or another. Perhaps out of an acute awareness of this fact, Williams et al. have refrained from even touching the word “alienation”. Undeterred, they categorize work as an issue of ‘job satisfaction’ (45).  Williams and team see only four abstract elements of job satisfaction (46):

Out of these discussions, Williams and his team develop what they call a ‘Good Work Index (GWI)’ (52). They argue that ‘intrinsic features of work have a much larger effect on well-being than extrinsic factors’ (p. 52). This means pay (an extrinsic factor) is less important than job satisfaction, for example, which is an intrinsic factor. HR managers have used this to convince company bosses to focus on intrinsic factors with extravagant pathologies such as employee of the month awards, special hats and badges for recognition, etc. This is done because it supposedly motivates employees and much more importantly because it comes cheaply – cheaper than a pay increase, for example, or improved working conditions, clear promotion paths and other actual efforts to make work good for something.

As the authors argue, ‘class is still a reasonable approximation of disparities in overall job quality’ (85). This still applies to the small business class, to the managerial class and to the working class as a whole. Yet there are variations to the theme as, for example, ‘product and fashion designers have the highest overall job quality’ (87). Perhaps these occupations show a relatively high level of autonomy and are generally not controlled by an overbearing boss or a technical process like the assembly line. Similarly, in the ‘Top 20 occupations’, one finds at number seven ‘higher education teaching professionals’ (88) – university lecturers.

Despite all this, one of the overall conclusions of the book is something many have known for a very long time: ‘class structure captures the broad contours of disparities in Good Work fairly well’ (85) even though they refer to occupational classes rather than Marx’s social classes. Aligned to this is the fact that ‘if you want to know whether a stranger has a relatively good or bad job the best single question you can ask him or her is still what he or she does for a living’ (100). On that the authors outline a rather surprising conclusion, namely that ‘artisan occupations that are…low paid [still] have modest overall job quality (such as beauticians, clergy, hairdressers, pub landlords and bakers)’ (101). On the whole, Williams et al. conclude that ‘occupations are becoming a better predictor of … job quality’ (102).

This might have been the case up until the 21st century but it might not necessarily remain so. This is largely because of automation. Experts predict that as much as ‘47% of employment in the United States could be fully automated by the year 2033 [which] ignores the fact that while some occupations may decline, others emerge and grow’ (104). On automation and what the future of jobs may look like, the authors discuss three key arguments, even without considering the world-wide economic crisis of Covid-19 which many pundits say will turn all such predictions irrelevant very soon. Not only insofar as working-from-home becomes the new normal or that low-paid jobs have been exposed as essential to a healthy society, but whole sectors of the tourist and hospitality industries may never recover from their current slump.

On the future of work, the authors list three perspectives. The optimistic perspective favours technology requiring ‘higher levels of skills’ (104); the pessimistic perspective sees technology aiding routinisation and ‘deskilling’ (105); finally, the polarisation perspective sees a ‘simultaneous growth in high-paid and low-paid occupations, with a decline in middle-paid ones’ (106). One possible trend in the future of employment can be seen in the fact that ‘in 1986, 45% of the labour force were employed in semi-routine and routine occupations. By 2017, 45% of the labour force was employed in managerial and professional occupations’ (113). The aforementioned polarisation perspective is also supported by Williams et al.’s argument that ‘higher-quality occupations might be getting better while lower-quality occupations might be getting even worse’ (115).

In the end, Williams and his team’s book offers three overall conclusions. The first conclusion is that, ‘Good Work is rich in intrinsic rewards…according to workers themselves [while] Bad Work (which tends to be routine) is increasingly being replaced by technology’ (121). Secondly, ‘a large fraction of the labour force are employed in very poor-quality work [at the] bottom end of the Good Work hierarchy’ (122). This is set to continue. Thirdly a ‘worrying trend [is that] even in highest-quality occupation, things have been getting worse or not improving’ (123).

Overall, this insightful book offers a thoughtful investigation into the question of what good work is. Supported by rafts of statistics, it argues that good work can be defined by nine key elements: wages; job security; learning; skill-use; task variety; task direction; job demand; working time; and participation. Many of these elements are severely limited by capitalism’s contradiction between what workers demand and employers will give. A second point is that their book is based on the UK and its overall theme may well apply to OECD countries, but they might do less so to labour in the Global South. Finally, what the book is missing is a sustained debate on the key issue that is inescapably linked to Good Work – alienation. Finally, as we have hinted, everything in this book could – potentially – be made irrelevant by a pandemic that seems to go on, and which causes advanced nations to re-think their whole social-economic structure. The role of immigration, the Global South, women’s breaking through glass ceilings, and climate change might also make Williams and his team’s book look somewhat quaint.