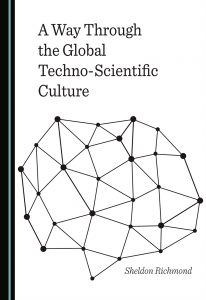 Sheldon Richmond
A Way through the Global Techno-Scientific Culture

The twenty-first century is turning out to be a deeply troubling time to study philosophy from the broad collection of perspectives that call the left home.

Rather than the predicted collapse of the capitalist state, or even the more modest socialist goal of a more egalitarian and democratic welfare state, we seem to face an ever-deepening capitalism. To the ends of studying how, exactly, the capitalist order is maintaining itself, Sheldon Richmond’s latest work, A Way Through the Global Techno-Scientific Culture, is a valuable and timely entry in a discussion that must be central to our contemporary understanding of relationships of power. How we, end users, relate to and through technology will undoubtedly affect how we live, and on whose terms. Works such as Richmond’s, which seeks one line of inquiry to map out that relationship, are necessary at our current moment, when many of our lives have become predominantly digital.

The book, in its prologue and first chapter, pose a question that this reviewer has shared with the author for some time: why, exactly, are people so mystified by the computers in their lives? After all, Richmond notes frequently, these computers merely interpret the data that is given to them, albeit in clever ways. This mystique is best seen when the user encounters an issue and has what is a highly emotional, almost religious reaction to a technical problem. Responding to what seems unknowable, the user often prays to their machine to work, before consulting a technological priest, helpline, an IT professional, or some unfortunate younger person, to perform an exorcism on the device to restore a sort of technological harmony. Aren’t all of these computers supposed to make our lives easier?

The mystification of technology, Richmond develops in chapter two, results fundamentally from the fact that we have been taught to work for computers rather than with them. That is to say, we have been well conditioned to answer work emails at all hours without a single idea at how a smartphone works; that technical knowledge is centered around what the author calls the technolopoly, which, like other ruling classes, uses that power to constitute us as a dumb, malleable workforce. Thankfully, the rest of the book is dedicated to the search for ways to break the hold on technical knowledge, and thus power, that has been developed by the technolopoly.

Chapter three challenges notions of a divided set of subcultures, instead calling upon the old, and sorely needed humanist mantra that people can, and want to, learn about and from each other if only we are willing to put in some effort. Leading that humanistic effort, chapter four and five suggest, should be philosophers willing to engage with computer technologies as insiders, but with the critical eye and perspective of an outsider: with this we can improve our understanding of technologies to empower each other, rather than to write elegant, but useless treatises on technical history.

The final chapter and the epilogue leave us with a call to action as scholar-activists: the technolopoly tightens its control over a homogenous digital culture by the day. If we are to empower ourselves and each other through demystifying technology the time is now, and we must seize the opportunity while it is still available to us.

In general terms, Richmond’s book is a timely intervention in our immediate political discourse, and his fundamental premise is sound. Keeping in mind the poor state of electoral politics in the United States and elsewhere, now is indeed the time to more critically study technology. The path forward that the author recommends, too, is reasonable. Treating technologies as part of culture, and thus the domain of humanistic thinking and praxis, will, I agree, begin the intellectual work of destabilizing the hegemony the technocracy.

At its core, the work is a necessary reminder that what we face is, indeed, dialectical: our lived material reality with computers is influenced by how we have been taught to relate to them. Computers are as much a part of the means of production as factories ever were; therefore, if we are to achieve or even attempt emancipatory praxis, we must relate to these machines differently. In this way, the work is an update of Marxist thinking, with a clearer view of technology than Marx himself had. Much of this clarity, as Richmond notes, comes from his own experience as a self-described computer person in the corporate world. This practical experience keeps the book’s feet on the ground while still being a well-developed and thoughtful work.

While the book is extremely well done in terms of engagement with literature ranging from Hume to Marx in its explorations of culture and power, there was, in my view, one missed opportunity that would have been a good fit in the concluding chapter. Deleuze, in his ‘Postscript on Societies of Control’ identifies, alluding to computers, the sheer saturation of control into most of our lives. An engagement between more classical Marxism and Deleuze would have added urgency to the conclusion’s call to action. Aside from that critique, though, the work is generally very well done.

The work sits at the intersection of several bodies of literature that make it particularly germane to contemporary political questions. First, as has already been noted, it is an update on the classical Marxist tradition. While capitalism has changed Since Marx’s lifetime, it is still hard at work excluding most people from knowledge and power, thus we ought to keep developing anti-capitalist modes of praxis. It is also a work which studies cultures of technology, a growing body of work straddling political science, history and ethnography To this end, especially given the points about the homogenous elite techno-culture, a little more engagement with Adorno, or more recently Ruha Benjamin’s Race After Technology, would have added richness.

Finally, and one of the highest points about the work, it is a wakeup call to the reading public. The book, free from the often-overused jargon to be found in much of contemporary political thought, is accessible to most literate persons, were they willing to follow the ample citations. To that end, the work serves as a powerful educational resource that would be well suited in particular to graduate courses. Overall, A Way through the Global Techno-Scientific Culture is a work I highly recommend to those interested in developing emancipatory praxis surrounding computer technologies.

There is also another group of people who would benefit strongly from reading this book. The field of computer science, Richmond aptly identifies, has become one of technicians. That is to say, they have become people adept at the making of clever, capitalist machines that operate, in terms of the language used in the work, to reinforce the technolopoly. This need not be so: following the historical trajectory of Marxism itself, we may need, if we are to succeed, to gain the aid of more computer people, in particular those entering the field. Thus, were I to teach a course on the ethics of computer science, I would include Richmond’s book along other works of critical theory both old and new.

Temporally, this book could have seldom come at a better time. Now, about three decades into the internet age, the political implications of technologies are becoming ever clearer. These technologies that so often frustrate us in our daily tasks also frustrate our attempts at democratic praxis in ways that only become readily apparent once one begins to take seriously the study of technology.

The news we see, the groups in which we find ourselves, the pages we read are now so often dictated by algorithms that we do not understand. To us novices, it looks like authentic cultural dialogues. It is not, as Richmond develops in the latter half of the book, and is instead the homogenous techno-culture that was first selling us automobiles, then televisions and now smart phones. If we are to re-capture these technologies to emancipatory ends, now is, indeed, the time.

I would like, then, to end this review in echoing the same hopes that Richmond shares, albeit from a different perspective. As an early-career academic in political science, I have, thanks to a young interest in video gaming and internet culture, been the computer person in my social group for some time. This is not a unique case: many of my students and colleagues share those interests, and we are often less mystified than those around us concerning the use of technologies. We also see that late capitalism is using these technologies to abuse people, whether through the tools of the surveillance state, or through the development of technologies meant to homogenize cultures and pave over differences to privilege and accelerate profits.

In addition to sharing knowledge to de-mystify, and thus empower one another, we must also make good use of the technologies we have now to empower democratic praxis on a quotidian basis. The same smart phone that can be used to, as always, buy and sell the commodities of the culture industry, can be used for critical debate, to share anti-capitalist knowledge, or even do something as simple as encouraging others to vote for candidates that will help to bring an end to the technopoly that, as part of the bourgeois enterprise, has once again brought popular sovereignty to the brink around our shared world.