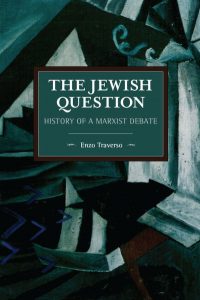 Enzo Traverso
The Jewish Question: History of a Marxist Debate

Igor Shoikhedbrod received his PhD in Political Science from the University of Toronto. He is …

Enzo Traverso’s The Jewish Question is an insightful book that tracks a longstanding debate in the Marxist tradition on the so-called ‘Jewish Question,’ beginning with Karl Marx and continuing all the way to Moishe Postone (221). Most impressive is Traverso’s ability to bring together Marxist thinkers and activists from different historical periods and regions in an effort to confront the issue of Jewish emancipation and its discontents. Traverso’s book grew out of his doctoral thesis at l’École des hautes études in the 1980s. Although Traverso notes that his book has been considerably revised and updated over the years, it remains a child of its times in important respects, most notably in its projection onto classical Marxism of a unillinear and teleological conception of historical progress that is utterly blind to particularity, to the distinctive monstrosity of the Holocaust, and to the desires of peoples and nations for self-determination (220). Traverso adheres to this well-worn narrative throughout the book despite classical Marxism’s cautionary statements about the possibility of the common ruin of contending classes in the Communist Manifesto, as well as Engels’s dictum in Ludwig Feuerbach and the End of Classical German Philosophy that human history evidences an ascending as well as a descending branch. That said, Traverso is to be commended for bringing into view Marxist-inspired reflections on the ‘Jewish Question’ that have mostly been eclipsed in the scholarly literature – those of Frederick Engels (23-28), Eduard Bernstein (67), Karl Kautsky (76-80), Rosa Luxemburg (92-98), Antonio Gramsci (136-142), Abraham Leon (178-195), Walter Benjamin (160-177), and Ernest Mandel (202-215). Traverso’s book also merits praise for its attention to the distinctive political experiences that shaped the debates of Russian-Jewish Marxists (Ber Borochov and Vladimir Medem in particular) and Bundists, and for placing these thinkers and movements in critical dialogue with Western Marxism.

Traverso’s book leaves readers with the unsettling impression that the debate on the ‘Jewish Question’ among Marxists has mostly been characterized by two interrelated tendencies: the prevalence of an economically reductionist account that equates Judaism with commercial activity, and an assimilationist logic that has been inspired by a humanist internationalism, both of which are found wanting in the final instance (216-217). The problem is that Traverso does not clearly decouple the logic of modern assimilation from the Marxist discourse of internationalism. Internationalism need not imply assimilation, or for that matter, dissolving the particular in an abstractly-conceived universal. Assimilationist policies have traditionally been linked to the consolidation of nation states and their boundaries of exclusion. For most of their history as a diaspora people, Jews have found themselves trapped in these boundaries of exclusion, being variously viewed by their ‘hosts’ as ‘guest peoples,’ ‘strangers,’ ‘wanderers,’ ‘exiles,’ and even ‘pariahs’ (Zeitlin 2012). Socialist varieties of Zionism complicate Traverso’s narrative somewhat, but this does not appear to trouble him, because he generally associates all manifestations of Zionism with colonialism. Be that as it may, political movements like Hashomer Hatzair, which were partially inspired by Marxism, sought to achieve a binational socialist state in Palestine. In this respect, Zeev Sternhell was correct when he concluded that the idea of socialism was tethered to the decisive aim of nation-building, which would explain why the legacy of socialism has mostly been forgotten in Israel (Sternhell 1998). In any event, critics will likely charge that Traverso’s discussion of the debate between Marxism and Zionism could have benefitted from a more nuanced account that is attentive to historical complexities and contradictions (Fine and Spencer 2017).

The main shortcoming of Traverso’s book consists in its inability to decouple the logic of modern assimilation from the aspirations of humanist internationalism (213). This conflation has the regrettable consequence of overlooking Marx’s potentially constructive contribution to the debate on the ‘Jewish Question’. In fairness, Traverso does an impressive job of discussing the host of competing scholarly reactions to Marx’s 1843 essay on this very topic. Interpretations of Marx’s formative essay have oscillated between the view of Marx as a thoroughgoing anti-Semite (14) and those who read his early essay as an indictment of bourgeois society and a call for human emancipation (22). The most striking absence in Traverso’s book is any elaborate discussion of Marx’s relationship to the Rhineland Jewish community, whose leaders approached the then 25-year-old editor of the Rheinische Zeitung to support a petition for equal rights. Marx’s recollection of events is worth quoting, not least because it provides a helpful context for his subsequent critique of Bruno Bauer, as well as his unambiguous support for the emancipation of Jews:

I have just been visited by the chief of the Jewish community here, who has asked me for a petition for the Jews to the Provincial Assembly, and I am willing to do it. However much I dislike the Jewish faith, Bauer’s view seems to me too abstract. The thing is to make as many breaches as possible in the Christian state and to smuggle in as much as we can of what is rational. At least, it must be attempted – and the embitterment grows with every petition that is rejected with protestations (Marx 1975: 400).

The historical persecution of Rhineland Jews was integral in shaping not only Marx’s personal biography but the development of his social and political thought, which Traverso would have been well advised to consider (Avineri 2019).

Historiography has a profound bearing on how lingering issues are approached and debated, and the ongoing controversy concerning the ‘Jewish Question’ on the left is no different. Notwithstanding Traverso’s attempt at updating his original thesis, his rendition of this debate ends abruptly with the aftermath of the Holocaust, and Marxism’s inability to come to terms with its lessons for reasons theoretical as well as political. This is not to say that all Marxists are uniformly critiqued by Traverso for their supposed obliviousness to the impending catastrophe of the Holocaust – Rosa Luxemburg, Leon Trotsky, Abraham Leon and Walter Benjamin are credited, in different ways, for becoming increasingly attentive to the ‘Jewish Question,’ and the likelihood that barbarism could prevail over socialism, as indeed it did. A curious lacuna in Traverso’s book is its inability to see the ‘Jewish Question’ as an enduring controversy. With the resurgence of neo-fascism and continued attacks against Jews (as well as other minorities) globally, the question of Jewish emancipation is far from passé, even and perhaps in spite of Israeli statehood. If Marxism has anything constructive to offer to the continuing debate on ‘the Jewish Question’ for the left, it must surely have something to do with the unfinished quest for human emancipation, which is neither abstract nor assimilationist in its aspirations. Marxism teaches, or at any rate ought to teach, that national identity and statehood are hardly safeguards against the prevalence of prejudice, discrimination and oppression.

Traverso’s compartmentalization of the debate about the ‘Jewish Question’ into three general orientations (assimilationist, internationalist and Zionist) misses the decisive lesson of Marx’s 1843 essay, the express aim of which was to defend the rights of Jews as human beings and to pinpoint the limitations of ‘political emancipation’ within a liberal nation state. Without downplaying the vast asymmetries that exist between Israelis and Palestinians today and the brutal legacy of the ongoing conflict, Isaac Deutscher’s insights remain prescient: ‘As long as a solution to the problem is sought in nationalist terms both Arab and Jew are condemned to move within a vicious circle of hatred and revenge’ (Deutscher 2017: 116). This is not meant to suggest that all forms of nationalism are equally oppressive, as ongoing struggles for national liberation make abundantly clear. However, against Deutscher’s best wishes, we are still stuck in this vicious circle at the global level. In the end, Traverso’s book does not so much aim at providing a resolution to the ‘Jewish Question.’ The chief accomplishment of Traverso’s book is ultimately its ability to bring the unsettled question of Jewish emancipation to the fore of Marxist politics, and in so doing, demonstrate its continued relevance in a world that has yet to emancipate itself from the scourges of nationalist chauvinism and neo-fascism. Traverso leaves readers with the task of picking up the broken pieces of internationalism in the aftermath of the Holocaust, perhaps with the broader hope of realizing what Ernst Bloch once called the ‘upright carriage’. For Bloch that meant realizing ‘the proper stature that [the human individual] has not yet achieved’ (Bloch 2018: 168). With the rise of neo-fascist movements and the resurgence of authoritarianism around the world, there is no more pressing a time for revisiting the moral and political stakes of the ‘Jewish Question,’ which has always been bound up with the unfinished project of human emancipation. In this respect, Traverso’s book is a welcome contribution.