Marx & Philosophy Review of BooksReviews‘Revenge Capitalism: The Ghosts of Empire, the Demons of Capital, and the Settling of Unpayable Debts’ by Max Haiven reviewed by John Thompson 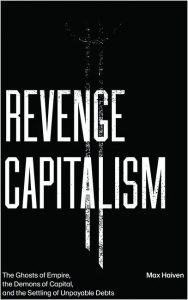 Max Haiven
Revenge Capitalism: The Ghosts of Empire, the Demons of Capital, and the Settling of Unpayable Debts

Revenge is in the air, something brimming as an affective dimension of these contemporary times. It is detachable and quite easily displaced. One evocative episode from Max Haiven’s Revenge Capitalism: The Ghosts of Empire, the Demons of Capital, and the Settling of Unpayable Debts underlines this point. It is a story his father told him of his grandfather, an Auschwitz survivor, a man his father admired for his forgiving nature and lack of ill will towards Germany. One day as the Six Day War plays on the television screen, this man, never previously interested in Zionist politics, becomes elated at the violence meted out to the Arabs on the television. The rage was there alright, but it emerges displaced from the Nazis to the Arabs.

Through a series of episodes and stories from historic and contemporary capitalism, this book investigates the vindictive nature of the system we live under and the bad affects it fosters. An attempt is made is to sketch a materialist theory of contemporary revenge, linking it to its causes in the structure of capitalist society. Noting the expansive nature of Haiven’s book, it is of great use to the reader that at the start of his analysis we are offered four guiding theses that animate the book. These theses are that ‘revenge is inherent to capitalism’, ‘revenge capitalism generates revenge politics’, ‘capitalism shapes our understanding of revenge’, and the fourth in the form of a question, ‘what would it mean to avenge the crimes of capitalism?’ A central element of Haiven’s theorization of revenge capitalism, that links emotive force to economic force, is a focus on reading the debt relation within capitalism as something that traverses the economic and social sphere. Relying in part on the analysis of David Graeber, he writes about the blurring of lines between moral and economic debt in solidified social hierarchies; we can think here for instance of the ‘being happy to have a job’ propaganda, the feeling that we owe the boss something or of forced labour pushed on prisoners to ‘pay’ for their crimes. Haiven analyses the ways in which violence is met out to the oppressed in the accumulation of capital but imagined by capitalist discourse itself as a pre-emptive strike against the already vengeful blood-lusting masses. There is a constant retroactive justification of the violence in terms of fear of this masses’ vengefulness. Haiven’s analysis relies on a re-wording of the Hobbes-Locke-Rousseau theories on the origin of the state in terms of an imagined warding off of blind revenge. This vindictiveness could be catalogued as an instance of ‘revenge-from-above’. This is precisely the kind of revenge promoted by colonialists in their day and mobilised by the Bannons and Trumps of the world today.

Structurally the book is divided into five chapters with a post-script written in March 2020 included to comment on the book in light of COVID-19. Each chapter itself finishes with an ‘Interlude’ which consists of a reading of a classic text or item of popular culture – The Merchant of Venice, Moby Dick, Khloe Kardashian’s Revenge Body and The Joker are the featured works – that fold together insights from the book’s theory as a whole.

Guiding the reader through television programmes, contemporary art, classics of literature, money, the OxyContin epidemic in the U.S. and the history of colonialism, the range of topics discussed is vast. This engagement with such a wide range of material is indicative of a certain cultural studies influenced approach and makes for very readable material. The success of such an approach can be weighed by the novel aspect that the readings reveal – the readings are not ‘proofs’ of the theory but display its force as a concept, allowing revenge as an illuminating adjective for contemporary capitalism to be examined from many aspects. At moments the book can feel like a catalogue of both interesting and shocking instances of the grotesquery of capitalism, with revenge as the novel theme with which to present this picture. This may be to do the ease with which one can read Haiven’s prose, which weaves a dramatic vocabulary of revenge, vengeance (capital as ‘vindictive tyrant’), and avenging, around the lure of the scenarios recounted. However, this is also what makes it imperative to look again into what is theoretical in Haiven’s theory of revenge.

Haiven has previously dealt with the topic of financialization in his Cultures of Financialization (2014) and returns to that topic here. Financialization is approached in the book not only as an economic programme but also as a practice of everyday life analysed primarily in Haiven’s chapter on ‘The Dead Zone.’ Haiven’s thought explicitly works via metaphor, commonly via reference to figures in literature and here the metaphor of ‘The Dead Zone’ from Stephen King’s 1979 novel of the same name is used in order to present an image of the inhospitableness of the spatio-temporal and affective dynamics of everyday life in capitalism. Interestingly, Haiven doesn’t refer to this as a process of entropy but uses the notion of eutrophication, the process where one element proliferating in an over-abundance in the ocean carpeting the sea with algae killing all underneath the surface. Thinking in this manner is true to the dynamism of capitalism and its insatiable unstoppable drive. The fostering of perfect conditions for capital around the globe destroys so many diverse and vast ecologies.

The book comes with a recommendation on its back-cover by Franco Bifo Berardi who highlights the text as of ‘strategic importance.’ A notable feature of Haiven’s book and his writing style is to make certain obscure aspects of Berardi’s thought itself clear. I am thinking of the Italian author’s frequent discussion of the effects of capitalism upon our neurology and psychology. This work of clarification is done in both the chapters ‘Our Opium Wars’ and ‘The Dead Zone.’ What is proposed is that we need to be alert to the way digital social media platforms engage our brains, hooking us on constant low-level dopamine hits. However, at the same time, contemporary neuroscience gives us reasons to take the debate on what type of story of capitalism we are capable of telling ourselves seriously. Utilizing Sylvia Wynter’s notion of homa narrans, which highlights that we are storytelling creatures before we are homo oeconomicus, calculating profit seeking species, grounds Haiven’s style of engagement that is steeped in storytelling.

Thus the book should be contextualized as an intervention into the debate around what new narratives the left needs in order to conceptualize contemporary capitalism and mobilise the masses; the ideas that we need to be able to narrate capitalism to ourselves in a way that makes radical sense. This storytelling ability is something capitalism has done its best to erode, from the hackneyed entrepreneurial hero narratives of much dominant cultural production, to the stifling of imagination wrought via the bureaucratization, neo-liberalization and de-funding of public education.

The unstated political question in all of this is the question of revolutionary subjectivity. The discussions of ‘neuro-plasticity’, the radical imaginary and affective potential of anger, make this clear. The book itself is not prescriptive in how to foster it, but nevertheless gives enough material for more thinking on the issue. The importance of this question is precisely what makes the final sections of the book most intriguing and pertinent, where Haiven utilizes his metaphorical vocabulary to help push us to think of the possibility of an avenging imaginary. Here where revenge on the part of the oppressed is discussed, utilizing Nietzsche, Orwell, Baldwin, Zizek, hooks and Lorde, Haiven offers us something novel that only reading capital as a saga of revenge and vindictiveness can give, i.e. how to think of the political potency of an alternative type of revenge for leftist radical thought. A distinction is posited between revenge, as an act of passion, and vengeance as an act of justice. He is keen to the affective dimensions of politics throughout the book but here it gets its theoretical cap in an understanding of rage’s power of generation and imagination. Commenting on Lorde’s analysis of the anger she felt growing up and throughout her adult life at racism and sexism, Haiven notes that this anger ‘is not a pathological, vengeful fixation on the object that caused pain but a means of collaborative sense-making, renaming and the cultivation of a vision of the world beyond the present.’ (194) The affect of anger caused by the event of injustice can here be the first coming together of a radical sense-making as the common affect of a community.

Haiven stresses the importance of warding of reconcilophelia, his term for the contemporary tendency to seek reconciliation and consensus, the desire for a harmonious unified appearance. The pragmatism of today’s reconcilophelia attempts to mask the underlying systematic problems of capitalism. It works to cover over the ongoing realities of the history of colonialism, picturing those who are angry and excluded by the system as simply vindictive.

In a concrete political instance, the terms of Haiven’s analysis (avenging imaginary versus the systems vengeance) allow him to justify demands for reparations not on grounds of their actuality, but in what they want us to imagine. Literally reparations cannot be paid to the price owed for the simple reason that it would bankrupt the system; they are an unpayable debt from below. This consequently can open up space for radical thinking to occur. A word of caution to be noted in such instances is the ever-present recuperation by the system – what if the system imagines a payment before we imagine an alternative, if the debt the present owes the past is settled at a bargain price?

What Haiven achieves is to successfully narrate the roots of revanchist revenge politics into capitalist exploitation and in that allow us to offer radical critiques of right populism. The critique is radical because it is able to read the interlocking of patriarchal and colonial exploitation in the development of capitalist accumulation. Where we are to think from here is the alternative imaginary that can guide a revolutionary subject.