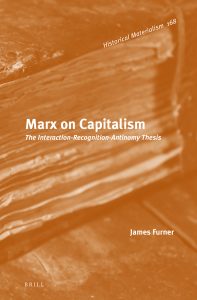 Rory Gillis is an MPhil Politics: Political Theory student at Mansfield College, Oxford. He is …

In his book Marx on Capitalism, James Furner aims to answer what he views as ‘the most fundamental question of Marxism’ (1). This is whether Marx offers a ‘plausible thesis […] that connects the capitalist economic structure with the state and classes so as to suggest that socialism is both possible and desirable’ (Ibid). According to Furner, he does, though this can only be seen when Marx is read in German. Furner therefore sets himself two tasks. Firstly, he aims to show that Marx held such a thesis. This involves large amounts of retranslation and reinterpretation of the writings of the German thinker, though the book spends little time attempting to situate those writings in their historical context. Secondly, he aims to show that the thesis is plausible. The thesis runs as follows. Any reasonable description of capitalism includes an account of two sorts of interaction: the interaction of those engaged in the purchasing and selling of commodities, and the interaction involved in exploitation. These two forms of interaction also involve two forms of recognition. The interaction of those involved in purchase and sale involves a recognition of personhood. Exploitation involves a recognition of a specific kind of domination. The two forms of interaction also include two antinomies, between natural rights and popular authorisation, and a rights-antinomy between the proletariat and the bourgeoisie. An antinomy involves a contradiction between two reasonable claims, though Furner uses the term in a more technical sense. There is a positive reason to move to socialism, namely to overcome these antinomies. Socialism is also made more feasible because its normative appeal is latent within capitalism.

After outlining the thesis in the introductory chapter, the book’s second and third chapters contextualise it by contrasting two different approaches to Marx’s writings popularised in the twentieth century. The first, associated with theorists including G.A. Cohen and Jon Elster, is Analytical Marxism. Though Furner admits that it ‘has long ceased to be a live movement’ (484), he plausibly contends that Analytical Marxism continues to cast a long shadow over Marx scholarship. Using Cohen’s 2000 introduction to the second edition of Karl Marx’s Theory of History: A Defence as his grounds for critique, Furner reiterates the common criticisms that the movement’s commitment to methodological individualism and its criticisms of the dialectic are unjustified. As an alternative, Furner introduces ‘commodity form philosophy’ as an approach to Marx’s writings, and associates it with Theodor Adorno and György Lukács. As its name suggests, the movement is concerned with the philosophical implications that can be surmised out of an analysis of the commodity. This approach is said to have added credibility because it is more faithful to Marx’s aim of attempting to derive interdisciplinary conclusions from an understanding of the economy. Furner’s criticisms of Analytical Marxism are skilful, though by focussing on Cohen’s later position articulated in his 2000 introduction, he fails to emphasise that the very topic of methodological individualism had previously been a source of contention within the movement. There is also little appreciation of the spirit of the movement, and therefore the criticisms appear uncharitable. Nonetheless, the whole exercise is a good rebuke to any suggestion that analytical philosophy has a monopoly on clarity and intellectual rigour. One may also remain hopeful that this style stands the best chance of overcoming the ‘dialogue of the deaf’ that often occurs between Marxists more and less sympathetic to the notion of the dialectic.

In chapters three, four and five, Furner lays the foundations required to expound the book’s thesis. This begins with the concept of action. Furner starts with the admission that ‘Marx offers no explicit philosophy of action’ (129), and therefore Furner’s analysis of the concept involves more reconstruction than interpretation. To connect Marx’s implicit concept of action to his understanding of social relations, Alfred Shütz’s division between ‘in-order-to motives’ and ‘because motives’ is used. The former is ‘the future state of affairs that the [an] actor expects their action to bring about’ (132), whereas the latter refers to ‘the pre-existing state of affairs that prompts the [an] action’ (132). Furner then claims that Marx’s concept of social relations relies on the importance of ‘in-order-to motives’, because these motives allow actors to orient action towards each other. Finally, the concept of a social structure is defined as a ‘combination of generalised interactions’ (176), and Furner outlines how capitalism can be explicated through this understanding.

After his highlighting of the importance of the interaction of purchase and sale in capitalism, it is in Furner’s discussion of exploitation in chapter eight that the originality of his thesis becomes most engaging. The discussion begins from the claim that a non-normative account is superior to a normative one on grounds of intelligibility; it allows us to better understand those who defend exploitation. From there, largely based on Marx and Engels’ manuscripts that were later formed into The German Ideology, Furner reconstructs the conditions that must be met if a person is considered to be exploited. For person x to have been exploited, person y must benefit as a consequence of harming x as a means to that benefit. An individual is harmed when they ‘[feature] in a course of action whose maxim is reinforced by a system and cannot be thought as a universal law of human nature’ (243). A maxim cannot be generalised into a universal law of human nature if it leads to a contradiction when everyone who meets its conditions performs it. Unlike Kant’s famous universalisability test, Furner’s test aims to evaluate systems rather than individuals. This Kantian interpretation of Marx’s concept of exploitation offers a thought-provoking alternative to the usual arguments in the Anglo-American literature, though the evidence given that Marx held a version of this view is somewhat limited. The interpretation is on strong ground in explaining Marx’s striking quote in the introduction of his Contribution to the Critique of Hegel’s Philosophy of Right which claims that the critique of religion entails ‘the categorical imperative to overthrow all relations in which the human being is a debased, enslaved, abandoned, despicable being’ (quoted on 243). This is clearly an important passage, though Marx also has areas of his writings where he is passionately anti-moralistic. It would have been interesting to see how Furner’s interpretation could contribute to the debate around Marx’s anti-moralism. Given that it does not focus on the individual and is less epistemologically demanding than the introduction of an external normative grounding for critique, it has greater potential to weather Marx’s criticisms of morality.

The first form of recognition that capitalism engenders is a mutual recognition of self-ownership. When people interact in purchase and sale, they tacitly affirm the importance of this principle. Both the purchaser and seller recognise their sovereignty over their respective commodities, without which their interaction would not be able to take place. By doing this, they are in turn recognising the normative importance of their will in determining these rights, and therefore, according to Furner, their self-ownership. Concern over domination in capitalism also represents (implicitly) a recognition of the importance of self-legislative human community. After reconstructing an account of domination from the Grundrisse that contests republican readings of Marx, Furner highlights the implicit presuppositions of such an account. The asymmetrical power relations present in domination under capitalism are said to be particularly concerning in the restrictions made to individuals’ wills.

In chapters eleven and twelve, Furner discusses two antinomies present in capitalism. There exists a contradiction between the freedom that capitalism professes to offer and what it actually offers. Furner believes that this is the antinomy Marx identifies in his division between political emancipation and human emancipation in On the Jewish Question. Furner’s discussion about the rights antinomy relating to the class struggle revolves around a famous passage about the length of the working day in the first volume of Marx’s Capital. Furner claims that many previous commentators have misunderstood the passage, and highlights that there is in fact an antinomy present in the duelling rights claims between the worker and the capitalist. The worker claims that they have a right to a shorter working day because they need time to replenish their labour power. The capitalist claims that they have the right to make the labourer work for a longer period each day. These antinomies cannot be resolved in capitalism, and therefore they encourage the movement to socialism.

Overall, this book is a very welcome contribution to many areas of literature in Marxist philosophy. Furner’s confident approach leads him to become embroiled in debates in a wide range of areas, though it is clear his contribution is often genuine. He provides engaging reconstructions of many of Marx’s key concepts, and one does not have to believe that Furner meets his ambitious goals to recognise that the book is an original intervention into the literature on Marx and exploitation. Furner dedicates detailed room to illustrating the limitations of the English translations of Marx’s writings, which should be of interest to other Marx scholars. In general, Furner’s sympathetic though critical attitude to Marx is a productive one, and though the book’s analytical style results in the prose being very dry, the technicality of the subject matter makes the book’s approach a necessary one.