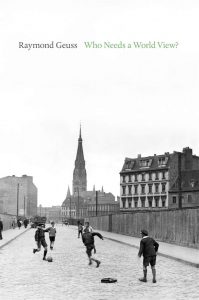 Alex Tebble is a PhD candidate at the University of York and teaches in political theory, the title …

The work of Raymond Geuss has often challenged some of the deeply held assumptions that seem to pervade political and moral thinking, and in doing so has frequently attempted to expose the illusions that perpetuate those assumptions; such as the ‘liberal democratic state’ being committed to the defence of basic ‘human rights’, or that what goes by the name of ‘political philosophy’ has any adequate grasp of what ‘politics’ fundamentally is (Geuss 2001, 2008). In this collection of essays, Geuss turns his attention to the systematic and the unitary, asking why a complete picture in which everything has its place is so often pursued and so highly prized for examining our lives, our positions in the world, and our systems of knowledge. ‘Whatever unity our drives, impulses, projects, beliefs, and commitments have is one that we have constructed’, and ‘human life is the story of this recurrent need to orient ourselves toward some imagined unity, and the recurrent failure of our attempts to achieve it by construction’ (xv-xvi). Who Needs a World View? explores the nature and limitations of some of those attempts.

‘Proletarians of all countries, unite!’, as one example of a ‘world view’, tells people ‘who they are’. It ‘carries with it certain duties, expectations, or obligations’ and forms a narrative that ‘gives special destiny, meaning, and concreteness to the identity the world view inculcates’ (1-2). The first essay is both a personal one, where Geuss reflects on figures that have played an important part in his own intellectual development, and also one of the broadest, where Catholicism and Communism are compared as the two coherent and complete world views that have exerted a significant spiritual force on the twentieth century. The nature of the comparison is somewhat reminiscent of Alasdair MacIntyre’s Marxism and Christianity: ‘only one secular doctrine retains the scope of traditional religion in offering an interpretation of human existence by means of which men situate themselves in the world and direct their actions to ends that transcend those offered by their immediate situation: Marxism’ (MacIntyre 1971, 10). Geuss cites MacIntyre on the power and significance that stories have for orientating ourselves in the world, and in the case of these two world views, orientating ourselves to the world to come—for Geuss, the emphasis seems to be less on Marxism per se and instead the function that Communism has performed as world view in certain expressions. Both Catholicism and Communism, it is suggested, understand individuals in relation to a certain historical and teleological development; they both look at the context of the beliefs and desires of individuals, having a complex set of views on their relation to general expressions of human needs and their corruptibility and distortion from either original sin or the ideological mechanisms of capitalist production; and they both impel those individuals to some transformative action as part of the process of self-understanding (7-9).

These two ‘world views’ are contrasted to the likes of liberalism, ‘a particularly debased and etiolated form of ancient humanism’, that has ‘no useful concept of history , and is thus ‘completely incapable of allowing one to understand anything much about human societies, the way they really operated, and the way they changed’ (6). Its poverty and vapidity as a world view are exhibited by the overwhelming banality of consumer choice as the grand sum of human life—a fair observation but one which perhaps does a disservice to some of the more romantic roots of liberal values. Pragmatism, on the other hand, does not see individuals as ‘entities who are set to map, reflect, mirror, or find beliefs that ‘correspond’ to the way the world really was in itself; rather they were highly developed animals, capable of various forms of actions, speech, and mentation, who sometimes found themselves in ‘problematic situations’ which they needed to deal with’ (17). What we have instead of world views, on the pragmatist’s terms, is what ‘works’. Perhaps, as Geuss suggests in a way that may even go beyond some versions of pragmatism, we do not even ‘need’ a world view or one that is ‘true’, and any community that it said to orientate themselves by some such world view does not, in fact, ‘share a single determinate, well-defined, explicit set of organised beliefs about the world’. Though such things may be fictions, ‘a dream is not a lie, it does not deceive me, if I know that it is a dream, and do not take it for something that it is not’ (32, 38).

The essays that follow turn to addressing our all-too-human life and our perceptions of it. What is it to live one’s life as a work of art? Can life be considered a game? What makes one’s life a success or a failure? What does it mean to live one’s life according to a set of principles? Geuss makes reference to two works by the sixteenth century Flemish painter Pieter Bruegel, ‘Children’s Games’ and ‘Netherlandish Proverbs’, as images that capture the chaotic and unfixed nature of human association and social phenomena, where multiple games and actions are being played and carried out by various actors simultaneously, and it is not clear where one ends and another beings, whether there is a definite subject or focal point, whether they form some coherent meaning together, or who is part of whose story. These chaotic and unfixed features are not things that can be so easily shrugged off, as it is often the chaotic nature of life that can make it its most tragic and frustrating. Life, after all, is not a game. There are no rules to evaluate success, life determines what is serious, and it certainly hasn’t been much fun for the majority of people (83). Equally, our ‘metaphysical need’ and ‘utopian impulse’ are often reflections of our existential anxiety; the finitude of our lives, the conflicting aspects of choice, and ‘the overwhelming experience of weakness, failure, pain, loss, disharmony in human life, and the difficulty we humans have in facing up to this fact and dealing with it in one way or another’ (95, 106-7). Something which cannot, perhaps, ever be ‘cured’ and cannot be soothed by even the revolutionary transformation of social conditions.

What these essays sometimes lack in sustained critical engagement, they certainly provide in quips and typically pithy remarks that have come to be characteristic of Geuss’ essays. Stylistically, a good humour runs through the essays as Geuss leaps between topics, hammer in hand ready to philosophize. Liberalism is characterised as ‘a clumsy and completely unphilosophical rubbish heap of narrow minded prejudices, bits of wishful thinking, and random observations’ (6); Aristotle, ‘an extraverted biologist and natural historian rather on the model of David Attenborough, but who also engaged in a bit of general theorising on the side’ (94); ‘the dogmatic Enlightenment’ is said to have ‘committed suicide at the latest in the early twenty-first century in the torture chambers of Guantanamo Bay and Abu Ghraib and secret CIA prisons of Poland, Romania, and Afghanistan’ (82); or consider the images of Tony Blair ‘lighting candles for the devil’, while Dick Cheney is ‘knocking his head uselessly against the brick wall’, and off in the top-left ‘the fool shits on the world… [which] immediately makes one think of an individual, like Trump’ (45).

Defecating, for that matter, occupies a central place in the eighth essay, ‘Metaphysics without Roots’. Alongside decrying pain, the expulsion of matter constitutes the negative expression of the body in all its primitive priority, a ‘no’ to the world, that is said to uproot and overturn our fascination with the positive over the negative, the one over the disparate (152). Even when Geuss is at his least convincing, an impressive range of examples and a strange brew of facile humour and blunt seriousness bring the topics to life, certainly the living aspects of life, that both mocks and bears the seriousness of it all.

By way of an alternative schema to world views, Geuss sets out the following in the final essay: ‘meaning (and consequently knowledge) is essentially contextual; second, meaning must be a collective, that is a social phenomenon; third, there is no final all-encompassing framework which puts everything together’; and ‘the absence of such a framework, and thus of any ‘final’ meaning visibly does not entirely destroy the phenomenon of local meaning’ (163). Geuss is not particularly interested in whether this ‘counts’ as a world view—if it is, so be it, seems to be the response. The importance seems to lie in turning ourselves away from our present fixations with world views towards an analysis of their sources, power, and functions. Something which seems to be consistent with Geuss’ defence of Nietzschean genealogy as a method for taking history ‘seriously’ (82). Equally, Geuss is by no means dismissive of all features of world views. Our ‘utopian impulse’ can be ‘future orientated’, rather than being directed to reconciling ourselves to the social order, and it expresses our dissatisfaction with the present and our memory of promises unfulfilled. As such, it can act as a motivational force directed against the present state of things (113).

Individually, only a couple of the essays would rank among Geuss’ best. Together, though, they are some of his most personal and they have a perceptive depth to them where each feels like a glimpse at life in its most spontaneous, creative, unruly, and ultimately, unknowable aspects, and the implications these have for how we orientate ourselves in the world.