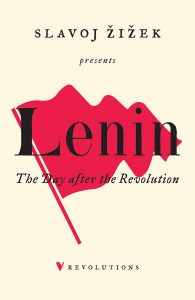 Slavoj Žižek
The Day After the Revolution

Elliot Dolan-Evans is a PhD student in political economy at Monash University. He is a …

Slavoj Žižek, the prolific Hegelian philosopher with psychoanalytic tendencies, introduces the late writings of Vladimir Lenin written as the latter struggled against urgent problems confronting the burgeoning Soviet Union in the early 1920s. Part of the Verso Books ‘Revolutions’ series, The Day After the Revolution, previously published in hardcover as Lenin 2017, features fourteen essays by Lenin in the last years of his life, with an introduction and afterword by Žižek. With this volume, Žižek re-reads Lenin’s struggles with Soviet bureaucratisation, the New Economic Policy (NEP), and ‘unprincipled opportunism and dogmatic intransigence’ (lxxxi). In doing so he agitates for an urgent reappraisal and revitalisation of the ‘kernel’ of late Leninist thought: the permission to go beyond the narrow confines of the existing nationalist conservative and democratic liberalism ideological matrix and strive for the impermissible, true choice of radical universal change. Revisiting Lenin, Žižek asks the reader to in-turn revisit the revolutionary process, and, quoting from Samuel Beckett’s Worstward Ho: ‘Try again. Fail again. Fail better’ (xxviii).

Žižek’s meandering and provocative narrative utilises Lacanian psychoanalytical theory and Hegelian dialectical philosophy to re-treat Lenin’s writings, which were penned after the Russian Civil War amid an illness that Lenin would never recover from. The (mostly) simplified theoretical basis of the book can be explained in two related manners, with assistance from Žižek’s elaborations elsewhere. First, in the course of psychoanalytic intervention, the therapist implements several treatments that are ultimately found to be superfluous before the ‘right formula’ can be found to help the patient (Žižek 2011, 9). The notion of temporality, described here, reveals that, though these repeatedly failed attempts seem superfluous, retroactively, they were, in fact, necessary for the positive outcome. Žižek puts Lenin in the seat of the therapist and sees his later revolutionary attempts to repeat the ‘beginning over and over again’ (50) to eventually ‘seek another path, longer, perhaps, but one that will enable him to reach the summit’ (29), as exemplifying the process of psychoanalytic intervention. Although Lenin is beset by the despairing and lamentations of both Party comrades (i.e. Sokolov) and anti-Party provocateurs (i.e. Myasnikov) in the hopelessness of the early Soviet situation, he discerns a properly dialectical paradox that he seeks, in the writings of The Day After the Revolution, to move beyond (lx). In this hopelessness, amid arguable, repeated failings that threatened the stability of the germinating Soviets, Lenin argued for Bolshevik power to diligently perform the educational and cultural tasks of progressive bourgeois regimes, and ‘by stimulating the efforts of the workers and peasants tenfold, [offer] us the opportunity to create the fundamental requisites of civilization in a different way from that of the West European countries’ (139-140). And, in so doing, find the ‘right formula’ for the material, cultural, and ideological bases for the establishment of communism in Soviet Russia.

The second theoretical basis of The Day After the Revolution is a broader, idealist Hegelian one. Žižek asserts that, in examining the final writings of Lenin, we must necessarily engage in a process of radical historical self-reflection. In this framework, the ‘Hegelian matrix’ of this dialectical process sees the failure of the Soviet Union to reach its Leninist goal of a possible communist reality move toward an intended reconciliation, which turns into its opposite, the situation of a Stalinist ‘really existing socialism’ (Žižek 2015, 37). And then, in a second moment, this failure is recognised as the form of success in a true reconciliation; so that the retrieval of this past is not as it was, but a realisation of the elements of the past that were ‘betrayed, stifled, failed to realise’ (Žižek 2017, 141). And so, to ‘repeat Lenin’, as Žižek urges in The Day After the Revolution, is to perceive the field of possibilities that he opened up, retrieve him in the sense of the non-realised potentials of Leninism, and repeat ‘what he failed to do, his missed opportunities’ (xv). Thirdly, chronologically, The Day After the Revolution must be situated as a sequel to Žižek’s 2011 title, Revolution at the Gates, which re-introduced Lenin’s writings from 1917. In this latter publication, Lenin’s essays clearly narrate the political struggles that were fought between the February and October revolutions, as Lenin urged his fellow Bolshevik’s to overthrow the bourgeoise democracy of the Provisional Government and ensure ‘all power to the soviets’ (Žižek 2011, 7). Whereas in The Day After the Revolution, the post-Civil War helplessness of the Soviet position, confronted on all sides by hostile bourgeoise nations, risked internal haemorrhaging through Party splits, and was beset by a lack of skilled cadre for day-to-day government administration. This context was faced by a defiant Lenin, who called for a sober, analytical approach to ‘spadework’ (10).

This book is divided into three parts. The first is the lengthy and, at times, meandering introduction by Žižek, where the aforementioned theoretical points of engagement are intertwined and explored together, as Žižek charts the political context of Lenin’s writings between 1921 and 1923. One of the more interesting arguments crafted here is the dissection of the term ‘freedom’, where Žižek contrasts the liberal bourgeois’ un-freedom to choose from a highly proscribed field of choice with Lenin’s ‘tirades against formal freedoms’, such as against Myasnikov’s notion of freedom of the press (5-11). Žižek makes the compelling point that the former ‘formal freedom’ is trapped within existing power relations, while Lenin’s promotion of ‘actual freedom’ aims to designate the site of choice as one that undermines the very coordinates of existing power relations and maintains the ‘fundamental revolutionary choice’ (xl). And in this way, Žižek argues that Lenin is the necessary, quasi-Lacanian ‘true Master’ that is not an agent of ‘discipline and prohibition’, but a permissive provocateur that allows us, and even pushes us, to think beyond capitalism and liberal democracy, out of ‘the quagmire of [our] inertia’ (lxii, lxvi). This psychoanalytical necessity for the revitalisation of Lenin is a unique view, one no doubt open to knee-jerk rejection and misappropriation through the manner of Žižek’s writing; but taking the argument prima facie, or at face value, it is a convincing point that today, more than ever, we need a ‘political dynamic’ to transcend the non-choice between liberalism and conservative nationalism, toward the hidden, impossible choice, of emancipatory freedom (xxxix, lxvi).

The second part of the book are Lenin’s essays from the final, turbulent years of his active life. Most of these texts need little introduction for those familiar with his work, containing famous and infamous works such as On Ascending a High Mountain, the Last Testament, and Our Revolution. One comment is necessary relating to Žižek’s own interpretation of these pages, however. In the Introduction, Žižek provocatively argues that Stalinism emerged from the seeds of Lenin ‘forgetting’ to take into account both the role of the state within the economy and the internal ‘class’ of the state apparatus, which ‘opened up the space for the state’s unrestrained power’ (see lxxi). However, within these essays that Žižek has curated, we constantly see how much the question of state political power in the economy weighed on Lenin’s mind. In promoting the NEP, Lenin urges the alliance between these economic forces and the Soviet state against the Menshevik (and other) petty-bourgeois element (26). At the Eleventh Congress of the Party, Lenin engages in a polemic that demands the connection of ‘state capitalism’ in the form of the NEP with ‘the workers, the advanced section of the workers, the vanguard. We are the state’ (53). It is difficult to see past the incontrovertible evidence that Lenin was constantly concerned with Soviet power in the economy and the emerging political force of cadres in the state bureaucracy, who he frequently railed against, understanding the risks of getting these questions wrong and falling down the ‘High Mountain’ (29-38).

The third part of the book is the relatively short afterword by Žižek, where he continues the debate as to whether Stalinism was a continuity of Leninism. There is some interest here in the Lacanian-inspired psychoanalytical interrogation of this alleged continuation, where Žižek argues that the ‘objective reality’ that Lenin’s Marxism allegedly created is open to subjective, ‘arbitrary interventions of [a] Master’, which eventually required the subordination of this reality to the Master’s (Stalin’s) arbitrariness and permitted the changing of facts retroactively to prove the Master’s discourse (177-179). However, there is something teleological about this argument, and the characterisation of Lenin’s Marxism borders on a fundamentalist dogma that is inflexible and ahistorical. Further, a broader critique of The Day After the Revolution is also in the lucidity of the text, which can be very difficult to follow when Žižek is at his purest. It seems that, fundamentally, the reader needs to understand the complete Žižek oeuvre to comprehend one; as ideas are often scattered between volumes like a trail of breadcrumb’s leading up to Lacan’s Hegelian gingerbread house.

However, despite these difficulties, The Day After the Revolution is an interesting read and a welcome return to Lenin in these ‘new and dark times’ (lxxviii). The underlying message of Žižek here, is to reiterate the revolutionary process and repeat the ‘beginning again and again’ through the non-realised potentials of Leninism (xxviii). This is done through choosing the ‘impossible choice’ of emancipatory change outside of the suffocating matrix of conservatism and liberalism (lxxvii). The Day After the Revolution, through this convincing yet disjointed narrative, positively invites the reader back into the revolutionary process, and to ‘Try again. Fail again. Fail better’ (xxviii).