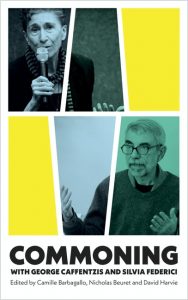 McDevitt-Irwin is a PhD student in the UC Santa Cruz Literature Department. …

Commoning with George Caffentzis and Silvia Federici is in many ways a non-traditional text. In seeking to celebrate the lives and works of two giants in Marxist theory, it employs a variety of approaches including academic articles, personal anecdotes, reflections from organizers on the grounds of contemporary struggles, and even a short story and a comic strip. Many of the themes that Caffentzis and Federici helped to develop – such as the commons, social reproduction, and critiques of technology – remain relevant today. As the editors note, Commoning is not fully representative of Caffentzis and Federici’s vast works; instead, it provides a sampling of their thought, acting as an entry point for new readers, a consolidation of major themes for those familiar with their works, and as an exploration of their impact on and involvement within anticapitalist struggles. A key strength of Commoning is that it pushes beyond the bounds of a traditional academic text, featuring a diversity of voices to illustrate the wide influence of Caffentzis and Federici’s work; however, its failure to address salient critiques of Marxist-Feminist thought from queer theory is disappointing.

Commoning is divided into five sections – Revolutionary Histories, Money and Value, Reproduction, Commons, and Struggles. From the outset of the volume, the editors establish struggle as the primary theme identifying ‘three ways to understand struggle within George and Silvia’s work: as practice, as theory, and as method’ (1). Struggle as practice is reflected through Caffentzis and Federici’s active participation in social movements from a young age which they outline in the first chapter, an interview titled ‘In Conversation with George Caffentzis and Silvia Federici’. A commitment to the practice of struggle complements their understanding of struggle in a theoretical sense; as Caffentzis states, ‘Ideas don’t come from a light-bulb moment in someone’s brain. Ideas come from struggles … the theory that you are using has been transformed by many people through struggle’ (18). Finally, struggle as method draws upon the Italian tradition of operaismo where ‘working class struggles are understood as primary – primary in the sense that it is struggle that militants must be concerned with and theorise, and primary to capitalist development, where struggle precedes capital’s transformations’ (2). By highlighting the role of the wageless within capitalist systems, Caffentzis and Federici worked to expand the terrain of struggle, broadening the base of anticapitalist resistance.

A major strength of Commoning is the diversity of voices and methods that it features. Section 3: Reproduction begins with Nic Vas and Camille Barbagallo’s comic ‘WTF is Social Reproduction?’ The non-traditional approach and accessible format of the comic makes it a useful pedagogical tool for those seeking an entry point into contemporary discussions of the crisis of social reproduction. In addition, Commoning highlights the voices of activists and organizers demonstrating how the work of Caffentzis and Federici has played a role in material struggles, rather than simply showing how their work has been applied in academic settings. ‘A Vocabulary of the Commons’ sees organizers Marcela Olivera and Alexander Dwinell explore how Caffentzis and Federici’s work on commoning helps illuminate the political stakes of the Bolivian Water Wars of 2000. While a state-centred point of view and a rights-based discourse generates a narrative of individual citizens fighting for their rights, Olivera and Dwinell argue that a vocabulary of the commons highlights the labour of social reproduction that such state-centred narratives obscure. By pushing beyond typical academic boundaries and into the realm of practical struggle, chapters such as this honour the radical praxis at the heart of Caffentzis and Federici’s work.

Other submissions to Commoning help to demonstrate the innovative nature of Caffentzis and Federici’s ideas, illuminating why their thought remains so influential. Nick Dyer-Witherford’s ‘In the Realm of Self-Reproducing Automata’ engages with Caffentzis’ writings on Artificial Intelligence and capitalist development. Marxist critiques of AI have traditionally fallen into two camps: first, those who base their work on Marx’s ‘Fragment of Machines’ in the Grundrisse and second, those who drawn from ‘The Law of the Tendency of the Rate of Profit to Fall’ in Capital Volume III. Caffentzis follows neither tradition precisely and instead looks to Chapter 9 of Capital Volume III, ‘Formation of a General Rate of Profit (Average Rate of Profit) and Transformations of Commodity Values into Prices of Production’ where Marx proposes that capital may find new sectors of production with low organic compositions of capital to defer crisis. Focusing on the ongoing connections between sectors with low and high organic compositions of capital, Caffentzis illuminates the unevenness of the capitalist system, where an increase in immaterial labour will necessarily entail an increase in the most exploitative labour elsewhere in the world. Caffentzis’ takes the transformation problem at a high level of abstraction, creating an innovative theoretical framework through which to examine the problem. In addition, Caffentzis’ fidelity to the primacy of working class struggles is demonstrated by placing emphasis on the most exploited of labourers.

Commoning also succeeds in building upon the work of Caffentzis and Federici by placing it in conversation with alternative academic traditions to deepen their analyses. Barbagallo’s second contribution, ‘Another Way Home: Slavery, Motherhood and Resistance,’ is an insightful addition to Federici’s analyses of reproduction found in Caliban and the Witch, challenging tendencies within feminist theory to assume a universal experience of home, motherhood and domestic labor. Looking to the early history of the trans-Atlantic slave trade – when it was cheaper to work slaves to death and buy new ones than to ‘breed’ them – Barbagallo illustrates that just as activities of reproduction were becoming increasingly obscured, naturalized and devalued in industrial Britain, there was a visible and measurable monetary value associated with these activities in regards to slave women in the colonies. In addition, she notes that domestic labour was often the only meaningful labour available for slave communities and was not an exclusively gendered sphere. By destabilizing notions of domesticity, Barbagallo seeks to answer the question of how certain homes become spaces of domination while others become spaces of resistance. Placing Federici’s work in conversation with scholars such as Angela Davis, Cedric Robinson, and Orlando Patterson, Barbagallo complicates dominant narratives of reproduction while highlighting a dialectical relationship between the value placed on reproductive labour in the colonies and metropoles.

Though particular essays in Section 3: Reproduction work to augment Federici’s analyses of reproduction, the largest disappointment of Commoning is its failure to address some of the most significant critiques. One of the largest challenges to the Marxist-Feminist revaluation of reproductive labour is the critique of reproductive futurism from queer theory. Reproductive futurism and its fidelity to an abstract notion of ‘the Child’ works as an ideological limit to politics, coupling domesticity and sexuality while upholding a framework of heteronormativity. Discourses of reproductive futurism dominate Commoning, with Massimo De Angelis going so far as to identify commoning for reproduction as ‘the political ground on which to base our strategies of emancipation from capital’ (220). Bue Rübner Hansen and Manuela Zechner’s ‘Extending the Family: Reflections on the Politics of Kinship’ also works within a framework of reproductive futurism in seeking to rethink the extended family by connecting lived experiences of maternity and childbearing with Brian Massumi’s concept of partial subjects. Of particular interest is Zechner’s claim to begin ‘from an unusual starting point and propose some thoughts about reproduction and belonging … as starting from the body and pregnancy’ (153). Considering the essentialist views of sexual difference that have haunted Marxist-Feminist thought from its inception, theorizing reproduction through the pregnant body seems anything but unusual. The issue is not that Hansen and Zechner choose to rethink kinship through their own experiences of parenting; in fact, they explicitly note that the experience of having a child is only one possible starting point for this conversation and do make a singular reference to queer families that ‘make virtue out of necessity and invent radical models of caring, parenting and living together’ (152). Instead, Commoning disappoints because it reproduces hegemonic discourses of reproductive futurism, rather than facing the challenge of queer theory head on.

Despite such shortcomings, the non-traditional approach and variety of themes explored in Commoning make it a valuable resource. Those interested in ideas of the commons, social reproduction, the ecological crisis, and critiques of technology will find relevant essays throughout the volume. However, as a whole, the book is best reserved for those with a particular appreciation for ‘George and Silvia’ themselves. As Massimo De Angelis emphasizes, the commons are more than a common pool of resources; instead, commons must be understood as social systems where the act of commoning must ‘be learned and relearned’ (218). In bringing together a variety of voices and approaches, Commoning enacts this relearning, giving equal care to various aspects of the diverse legacy left by Caffentzis and Federici.