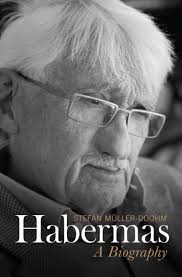 J.D. Evans teaches at George Mason University. He is working on an interpretation of Adorno based …

Jürgen Habermas is one of the most prolific authors of the last hundred years, and has just recently added a two-volume history of western philosophy to his tally. It is a shame that Stefan Müller-Doohm’s biography was published before Habermas’s Auch Eine Geschichte der Philosophie, but such is Habermas’ productivity that any book written about him is likely to be slightly outdated by its publication. Indeed, he may well have published another book by the time we get half-way through this review.

Müller-Doohm’s biography will remain valuable regardless. He brings to the task great skill as an historian of critical theory and as a writer: he studied with Adorno and Horkheimer and wrote a biography of the former. Müller-Doohm’s Habermas is well organized and clear, as well as extremely well researched. Müller-Doohm does not offer full or extensive analyses of Habermas’ ideas, but that is not the task of a biography, which should put those ideas in historical and personal context. At this, Müller-Doohm succeeds admirably. Habermas appears here in the lights of post-war German history, of his own extensive, idiosyncratic philosophical reading, and of the professional structures that he navigates so successfully.

Habermas was born in 1929 in Düsseldorf. As a child, he was enrolled in various Nazi youth organisations, and was called up to the Wehrmacht in 1945. But he was not home to receive the notice, and soon afterwards the war was over in Germany. After the war, his father gave him books by the ordoliberals Wilhelm Röpke and Walter Eucken, and later his father’s friends suggested that Habermas look more closely into that economic theory (28). But at university he was more taken with democracy than with liberalism, a tendency he attributed to the re-educational programs set up in post-war West Germany. At Bonn he met Karl-Otto Apel, who would remain an important influence and peer. Apel seems to have been the main impetus behind Habermas’ focus on philosophy of language.

Before returning to the academy, Habermas wrote reviews of philosophical, sociological and politics books and ideas for public-facing journals. His most momentous piece was an attack on Heidegger’s recently published Introduction to Metaphysics, with its notorious claims about Nazism’s ‘inner truth and greatness.’ Habermas pointed out the obvious and was promptly attacked by prominent conservatives in the press and, ultimately, Heidegger himself, who refused to apologise.

The article caught Adorno’s notice, and no doubt helped Habermas secure a position as Adorno’s assistant at the Institute for Social Research. They got along well, perhaps because Habermas realised that Adorno ‘was defenceless […] among proper adults – i.e., in situations in which routinized types exploited his weaknesses’ (74). He also felt that Adorno and Horkheimer did not keep up with contemporary philosophy, particularly Heidegger, and started to think of himself as someone ‘a little less prejudiced in his reception of philosophical and scientific traditions’ (76). Whereas Horkheimer’s thought seemed to have ‘come to a standstill,’ Habermas was quite taken by Marcuse’s essays linking Marx and Heidegger together (81). Unsurprisingly, Habermas and Horkheimer did not get along well at that time. Habermas left the Institute in 1959, after Hans-Georg Gadamer helped him receive a scholarship at the German Research Foundation.

Müller-Doohm argues that Habermas’ career then developed in four stages. First, he completed his Habilitation at Marburg. Second, he took a position as professor at the University of Heidelberg, where he worked on Marxism, hermeneutics, the social sciences and psychoanalysis. Third, he became involved in the positivist dispute, defending critical theory against the critical rationalism of Karl Popper and others. Finally, he took a full professorship at Frankfurt’s Goethe University, succeeding Horkheimer, who had since come to approve of Habermas’ abilities (88-89).

Although Apel called Habermas a ‘neo-Marxist,’ it was easy to see that Habermas was putting distance between himself and any kind of Marxist thought. In 1960, he criticized Marxism as a whole. Critical theorists should stop thinking about revolution, and focus more on ‘a progressive democratization of society,’ which could take place ‘even within the economic order of capitalism.’ He came to understand that Marxism offered him tools ‘to investigate how the relationship between democracy and capitalism developed,’ but nothing more (97). By the mid-sixties, Habermas had come to believe that Marxist essentialism about labour and class could not ground critique, and that Adorno’s attempt to practice critique without grounds was doomed. The problem he found himself circling, then, was how ‘to name the normative ground of critique’ (122).

This led to Habermas’ best-known theoretical arguments. He focussed on the workings of language, rather than ‘the philosophy of consciousness’ (132), and tried to explain the life-world on that basis. The conditions for proper linguistic communication, which is the transcendental basis of the human life-world, provide the grounds for emancipatory thought and action. The conditions for communication are the full inclusion of all those affected, an equal distribution of rights and duties to those in the debate, absence of coercion and an agreement among participants that they aim to reach mutual understanding (160). Any human action that does not allow for the fulfilment of these conditions is in contradiction with the grounds for the possibility of human action, and so is logically incoherent. Therefore, it can be criticized rationally. Habermas effectively brings together Gadamer’s linguistic idealism (according to which all human reality is mediated by language) and Kant’s transcendentalism. He downplays the role of institutions and social structures in favour of norms and grounds.

Habermas’ best-known public intervention took place in these years: in 1967, he accused the student leader Rudi Dutschke of ‘left-wing fascism’ (141). What was meant to be an internal criticism of student politics was eagerly picked up by conservatives in Germany, and the idea of leftist fascism has had an unfortunately long life in other countries. The following year, Habermas refused to condemn the conservative Springer press’s baiting of Dutschke when an attempt was made on the latter’s life, and argued that the students should pursue their aims through the democratic system. This led Wolfgang Abendroth to recognize that Habermas had ‘given up his socialist position in favour of an internal liberal critique’ (149). As Klaus Meschkat pointed out, Habermas’ attempt to ground all moral actions in a general theory led him to see himself as a fully independent critic, not an engaged activist. His independence and his abstractions made him look ‘so similar to those urbane journalists from Hamburg whose political principles do not exceed a vain display of impartiality that you can hardly notice a difference’. A telling example of this ‘impartiality’ was Habermas’ belief that the only options available to West Germany at the time were the status quo or a fall into the actually existing socialism of the Soviet states, which he assumed to be unreformable (150). The idea of democratic socialism was, apparently, not visible from the impartial heights.

In 1971, Habermas left Frankfurt and took a position at the Max Planck Institute, where he would no longer have to teach. For much of the rest of book, we see Habermas leap from academic award to academic award, from position to high-ranking position, as his remarkably successful academic career continues. He holidays on Elba; he meets Richard Rorty; he works hard to publish books in various Suhrkamp series; he wins the Sigmund Freud Prize for Scientific Prose (which will surely amaze anyone who reads him in English translation); he continues to intervene in public debates; he fails to secure an honorary professorship in Munich; he completes his Theory of Communicative Action, a crucial book, which Müller-Doohm ably summarizes (214-220).

After all of this, in 1981, Habermas protested that he was not able to fire staff from the Max Planck Institute, and stepped down as president. The institute was shut down, although an alternative was simply to allow four economists to keep their jobs. After this murky affair, Ulrich Greiner described Habermas as invoking ‘the mechanisms of the market like a mad Rank-Xerox salesman’ (204).

Habermas then returned to the Goethe University, where he worked on various extensions of the general social theory he had mostly completed with Theory of Communicative Action. It seems that everything can be brought within its ambit: philosophy of law, human rights, political theory, the history of philosophy. Despite criticism from both the German right (which thought he was a Marxist) and the left (which knew he was not), Habermas continued to collect publications, appointments and prizes. To name just some of the prizes: the Leibniz, the Karl Jaspers, the Theodor Heuss, the Sonning, the Prince of Asturias, the Kyoto, the Holberg, the Bruno Kreisky, the State Prize of North Rhine-Westphalia, the Hesse Cultural Prize, the Peace Prize of the German Publishers and Booksellers Association and the Erasmus Prize.

Müller-Doohm tells this story with perfect, Habermasian impartiality. Habermas cooperated in the writing of the biography, and the book is mostly a record of events. There is little to no attempt to give explanations of Habermas’ sometimes baffling actions, and it is sometimes hard to tell what exactly those actions were: the extraordinary situation at the Max Planck Institute is barely comprehensible. But this neutrality is the book’s strength. Habermas has plainly lived an exemplary late-twentieth century life, escaping from the shadow of totalitarianism, making his peace with the actually existing world and flourishing in it. It is impossible to read the biography without wondering why anyone needs quite so many prizes, positions or publications, or why we have to put up with a society and an academic world that rewards previous success, rather than supports younger scholars. The last hundred pages, in particular, read more like a David Lodge satire with the jokes taken out than anything most academics or students would recognize as their ordinary lives. This is certainly not Habermas’ fault. His journalism, at least, is marked by an aggressive, polemical edge. But his theory suits a self-satisfied audience. Müller-Doohm’s book will appeal to that audience, as well as those of a more critical bent.