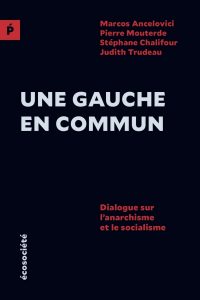 Une gauche en commun is an effort to develop a response to the question: ‘what is to be done?’, focusing on Quebec after ‘Carré rouge’. The ‘Carré rouge’ or ‘Red Square’ movement was another name for the 2012 Quebec student protests. It was so called since the protestors wore a red square cloth on their clothes, bags, etc. This square has been a symbol of struggle since 2004. In the contemporary history of Canada, this movement is quite unprecedented. It was born as a reaction to the gradual increase of tuition fees. In March 2011, the government of Quebec announced a new rise in the tuition fees of 1625 dollars in five years. This meant an increase of 75% (Ibid). The reaction of the student unions began in the fall of 2011. Known also for its diverse struggle tactics, the movement could mobilize an enormously large number of people in the streets of the Quebec province, but also throughout Canada. It could activate different strata of society: not only university and college students and their teachers, but also workers, unions, politicians, artists, actors and even lawyers. Following a tradition rooted in Chile, people also used clanging pots to decry the oppression and a restrictive emergency legislation. With the passage of time, the movement grew further with more radical demands for free, accessible and democratic education, equality, social justice, etc. When the new government agreed to index the tuition fees, it put an end to the eight-month crisis.

Interestingly, the interlocutors, who played important roles in this movement, are both immigrants with unorthodox socialist and anarchist tendencies, and wide experience in international struggles. The question ‘what is to be done?’ in this context may be reformulated as follows: why didn’t such an enormous mobilization lead to a victory? What were the shortcomings of the left? What lessons may be learned from this and other struggles of the past to act differently in the future?

Une gauche en commun seeks to investigate these questions and has four axes developed through four chapters, although the themes overlap quite often.

In chapter one, ‘Socialist and Anarchist: Assuming a Heritage, a Glimpse of the Future’, two of the authors agree that there is a many tendencies from which the left can draw. For Ancelovici, the compass is the notion of anarchy as a form of organization that is anti-hierarchical, anti-authoritative and radically egalitarian. While he mentions some existing successful experiences in the past, he is pessimistic with regard to the possibility of the realization of anarchism in the future. Mouterde, in his turn, thinks that in the successful experiences of the past we can find the means to act collectively in a promising way and sketch a better world. According to him, without this belief, one cannot imagine revolutionizing the status quo. This is how the compass is to be created.

Given the general understanding of the terms ‘anarchism’ and ‘socialism’, the reader of chapter two, ‘The Street, the Ballot Box and Democracy’, may expect an unsurmountable conflict here. Yet this is not the case for two reasons: both agree on several common points; both are unorthodox and self-critical.

With regard to the former, the authors admit that the lineages of the left and its projects are in a multifold crisis with a particularly tangible crisis of collective identity: ‘the Communism of the East, Social Democracy of the West, and Popular Nationalism of the South have melted into the air’ (60); the left has not gone beyond its wooden language and has not found the required means to communicate positively and sustainably with the masses. In other words, the great collective values of the historical left are no longer existent or shared by the masses. We live in a society uniquely dominated by the logic of capitalist profit and as such, the left needs a new strategy and also a new narrative.

With regard to unorthodoxy and self-critique, Ancelovici sees an ideological component in the term ‘anarchism’ and prefers libertarian instead; he defends ‘the necessity to build a constituting power’ (83) and finds no problem in electoral organizing of the left for introducing candidates with anarchist orientation. Mouterde, in his turn, criticizes the party of which he is a cofounder, namely, Québec Solidaire, for being inactive in reaching the masses.

With the tendency of the frontiers between the political practices of anarchists and socialists to scramble, the points of divergence are remarkable: Mouterde mentions that anarchists ignore that in an assembly there is also the ‘game of power and influence’ (48). He holds that some entities such as the state, government, parliament, etc., are more important for structuring the forms of struggles – this is what ‘the real’ imposes on us. Both of these tenets are rejected by Ancelovici: giving priority to such entities weakens the grassroots struggles; such an imposition by the ‘real’, according to him, does not exist. It is rather the result of the weight wrongly attributed to these components of our struggle. This is how the interlocutors vary in their perception of the indispensable transition towards a desirable position.

Chapter three, ‘The Fragmented Nation?’, marks further distinctions: Ancelovici says that the nation-state is not as necessary as oxygen (108). This institution, and all others created from above, demands the importance of using political imagination to go beyond them. To this end, an intersectional analysis can be quite fruitful, if it does not weaken the social classes. For Mouterde, one has to rethink the nation as a rallying vector. Nation is the only space through which an assuring struggle against ‘the neoliberal bulldozer’ and a real victory becomes possible. Thus, in the neoliberal era, one should not opt for the disappearance of nations, but aim at their ‘common and egalitarian affirmation’ (112). Thus, an intersectional analysis that merely addresses fragments of society rather than its political framework in its totality remains problematic.

Given that revolution, as an essential value commonly shared amongst the left, no longer resonates with the masses, chapter four, ‘The Revolution, We Liked It So Much’, becomes the most challenging and perhaps least promising for a reader in need of an instant response for the mobilization of revolution. Here Ancelovici argues to show the ambiguity of ‘radical’ as a substitute for ‘revolutionary’. He also denies considering revolution as a brusque transformation. To distinguish revolution from regime change in general and a coup d’état in particular, he mentions four criteria distinctive of a revolutionary process: institutional rupture, the transformation of social structures, challenging elites and social hierarchies, and finally transformation of the organization of daily life. He thinks that following the fall of the Berlin Wall, one cannot have an a priori belief in revolution. Here Ancelovici’s discussion begins to sound like a pedantic professor edifying to its students, as if in a classroom. As such, Ancelovici evades the pursuit of discussing of the possibility or desirability of revolution in our era.

For Mouterde, given the absence of sociopolitical power amongst the left to transform the status quo, revolution is no longer in the order of ‘the immediate immediacy’. We can instead learn to consider transition in a revolutionary way, that is, ‘to think of transition as a social dynamic […] which permits the radicalization of politics, which is in the beginning probably reformist’, and try to ‘make it each time more transformative, more radical and more revolutionary’ (162). The crucial for Mouterde here is the movement, the rising initiation of social struggle in collective rebellion, to build up a counterhegemonic power (Ibid). From the previous revolutions one has to acknowledge the need to attack the fundamental structures of society, class relationships and the oligarchy of financial groups. Yet two points are left almost completely unaddressed here: first, whether one may embrace the idea of the possibility of a revolution in one country alone. A positive or negative response to this question necessitates further elaboration. The second is how the struggle for reform as a means (to echo Rosa Luxemburg) may lead to revolution as a goal.

At the end of Une gauche en commun, the reader may ask how can the dialogue between these interlocutors, facilitated by their two colleagues Stéphane Chalifour and Judith Trudeau, reach masses with such different theoretical and practical backgrounds? This was and remains a strategic question for which dialogue between individuals on the left is a necessary but insufficient step. In responding to such questions, we may hope that struggles such as ‘Carré rouge’ will turn into victories.