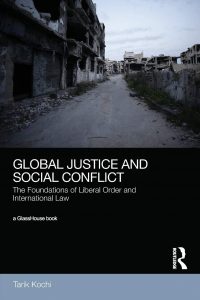 Reese Faust is a PhD student in Philosophy at The University of Memphis. His interests are legal …

Tarik Kochi has produced a rich, ambitious study with an impressive intellectual scope and insights drawn from Mediterranean antiquity to contemporary critical political and legal theory. Such a broad purview in such a relatively slim volume might give one pause; however, given the subject-matter of Global Justice and Social Conflict, it is difficult to see how a less comprehensive vision could address the dire challenges the global order presents. The questions that follow stubbornly resist either easy or simple answers: how ought we (re-)think the field of international law, given the dominance of neoliberalism and its institutions? Is the geopolitical imaginary so over-determined that thinking of alternative relations between states and non-state actors totally foreclosed? Or perhaps more succinctly, given its half-century of failure for the vast majority of the world’s population, how can the hegemony of liberal internationalism be dismantled – perhaps even overcome – in order to promote a more substantive global justice?

Against neoliberalism qua liberal internationalism, Kochi posits rethinking international law and its institutions of global management as ‘a field of debate, argumentation, contestation and struggle’ (2). He maintains that the conceptual foundations of this order – natural law, natural rights and republican constitutionalism – already contain the possibility of radical, alternative legal visions. His critical re-examination seeks to re-articulate these concepts as ‘intellectual expressions of normative, ideological, class and political struggles over how to organise questions of social and economic justice’ (7). In this sense, Kochi’s central claim is that ‘at the core of republican political and legal thought resides a critical appreciation and understanding of the centrality of normative, ideological, class and political struggles over social and economic justice’ (12). The thread that runs through this critical exercise is the question of property: as the nexus between individual and social around which this intellectual history struggles, Kochi casts the present international legal order as simply one possible reading of these traditions. His gambit, then, is that unravelling the ideologically-overdetermined understanding of the property relation can allow suppressed discursive formations to emerge from these foundations, in order to contest the dominant neoliberal reading that undergirds the present world-system.

Much of the critique within the first chapter should be familiar to critical internationalists, but Kochi’s impressive array of sources will benefit readers of any level. He describes both a ‘transnational capitalist class’ that mobilises ‘transnational state apparatuses’ for the sake of capital accumulation, as well as to discipline both states and populations pursuant to that goal. Key to this project is the naturalization of individual rights to private property as both ‘natural’ and absolute. As a result, the ‘successful’ protection of these interests by this class and its actors effect the ‘failures’ of the international legal order for others. Kochi therefore claims that law is best understood as a field of contestation and struggle, with international law ‘constituted by a series of normative and material struggles and conflicts over what counts as the idea of social and economic justice, and over how to implement this on a global scale’ (45). It is through this prism that Kochi frames his intervention, to think a ‘distinctly non-neoliberal future’ (ibid).

Chapter two presents a historical genealogy of natural law and natural rights, wherein Kochi locates a tension between ‘an ethic of human sociability and fellowship, and a theory of the utility of unsocial and self-interested private property and commercial relations’ (48). He traces the re-articulation of Aristotelian property rights and Stoic cosmopolitanism to Cicero, who proposes a universal natural law of self-preservation with the corresponding duties not to harm others or to arbitrarily take their property (65). Similarly derived from Roman property law, natural right develops through medieval liturgical debates before its watershed formulation by Hugo Grotius (76). For Kochi, the Dutch jurist takes the Stoic-Ciceronian concepts of ‘self-preservation, the duty not to harm others, the respect of contracts, treaties, private property and common property, and uses these to reimagine and project a global juridical space’ in light of the expanding early modern sea trade (88). Completing this survey is Kant, but not his familiar, neo-Grotian account of interstate cooperation directed by the demands of the categorical imperative. Instead, Kant’s claim that property rights are ‘provisional’ – and can only be ‘substantiated’ through mutual consent in civil society – stands for a radical critique of unjustly acquired colonial property – even if Kant’s own position on colonialism is arguably far more complicated (97-98). Still, by reading the tradition against itself, Kochi argues that such critical resources dwell within the same conceptual foundations as the ‘standard’ liberal internationalist reading.

Although a central theme of the preceding chapter, Kochi’s treatment of the specifically modern problem of property occurs in chapter three. There he describes the ‘paradox of property’, the ‘problem that the “rights” of private property and state sovereignty are often historically founded upon the “wrongs” of historical violence, of dispossession, theft, and seizure’ (99). In this light, while broadly sharing a Grotian religious-moral understanding of natural law, John Locke’s condemnation of wasteful possession of property becomes justification for colonial dispossession (109). Likewise, Adam Smith attempts to overcome this problem by arguing that the inequality that private property engenders, mobilises and enables individualistic economic desire for the benefit of ‘social welfare’ (126). For Kochi, Smith’s acceptance of the violent historical wrongs underpinning such property relations as a ‘juridical form of right’ elevated the interests of the propertied few over the propertyless masses, rendering them subject to biopolitical management (134). At the international level, Smith used this inequality to justify military protectionism of national commercial interests against free global trade (136). From this reading of Smith, Kochi concludes that violence is inseparable from any liberal political economic order; and further, that a ‘fiscal-military state’ is needed to ‘navigate an unequal interstate realm constituted by relations of violent property and capital accumulation’ (ibid).

If the paradox of property grounds the problematic of the modern global order, chapter four sketches the conceptual revolution necessary to contest its dominance. Somewhat surprisingly, it is not Hegel who is put back on his feet through Marxian intervention, but Kant, as his cosmopolitan framework conceals the social and class conflicts embedded within the liberal order. Seizing on ‘conflict’ as the germ of law broadly, Kochi develops a Hegelian-Marxian notion of ‘social and “constitutional antagonism”’ to argue that ‘disagreement, struggle and conflict over the ordering of social and economic justice, social and property relations, democracy and equality reside at the heart of republican thought’ (140). He traces a republican recognition of social antagonism in Aristotle’s Politics, the historians of the Roman Republic and their synthesis in Machiavelli, in order to argue that many concepts within modern international law – e.g. ‘sovereignty’, ‘self-determination’, ‘citizenship’, ‘democracy’ – reflect this tradition (164). As an inheritor of neo-Greco-Roman republicanism and a critical reader of Smith, Hegel proves the decisive figure for Kochi due to his thesis that social conflict is a struggle over competing visions of normativity and the realisation of ideas of justice and right (169-171). While Marx shifts the critical analysis toward class conflict and concrete social relations, Hegel’s notion of struggle persists through Kochi’s reading of Marxist and ‘post-Marxist’ theorists of the late twentieth and early twenty-first centuries (181-191). Hence, although he understands the global neoliberal constitutional order in terms of Marxian critique, Kochi’s prescriptive impulse for constitutional antagonism remains Hegelian given the necessity of conflictual struggle for contesting this order (192-193).

In the final chapter – which, given his argument, is necessarily the most general and speculative – Kochi attempts to reframe global constitutionalism through the problem of constitutional antagonism through the question of legitimacy. He details how the post-World War II global order was remade via ‘overlapping global constitutional projects’, often led by the United States, that sought to ‘contain, destroy, and defeat’ constitutional visions outside the ambit of liberal cosmopolitanism (201). This loose ideological framework, Kochi argues, presents a veneer of constitutional legitimacy despite lacking an attendant constituency to check its development or define its values. The absence of democratic accountability permits un-democratic actors – judges, bureaucrats, academics – to ‘auto-constitutionalise’ new rights under a neoliberal vision of social and economic justice (206-209). Accordingly, a critical approach to global constitutional projects requires not only democratisation, but ‘the strategic ability of radical social movements to turn global governance organisations and transnational state apparatuses into ideological fields of contestation and struggle and thus, the attempt to introduce alternative approaches to global justice at the level of intellectual production, policy determination and implementation’ (213). In this sense, Kochi concludes, international law must be understood as a matter of global and public concern that actively engages with questions of transnational social and property relations – and thus, questions of global justice (218).

Books like this – informed by past injustice, oriented toward future possibility, critically engaged in the moment – can be frustrating due their lack of precise prescriptive detail. But, following the tradition of radical, republican egalitarianism, the moral and political onus to engage in conflict over meaning and to constitute a new order, falls to us all. In Global Justice and Social Conflict, Kochi has argued that the international legal register can be re-staged as site for global justice, which leaves only one question: will we, in fact, struggle?