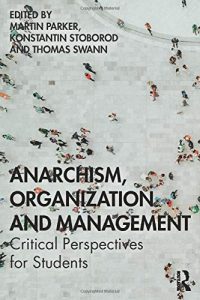 Perhaps apart from the occasional articles in the critical online management journal Ephemera – A Journal of Theory and Politics in Organisations and Taibo’s Rethinking Anarchy: Direct Action, Autonomy, Self-Management (2018) which only mentions management in passing and as self-management, there is virtually nothing written that links anarchism to management. Parker et al.’s collection Anarchy, Organisations and Management is therefore largely a first. For too many people, words like ‘anarchy’ and ‘management’ are obvious contradictions. Still, both share a history that dates back to a time when anarchy and management put forward ideas on how to organise work in factories. For that, ‘people use a particular language’ (2) in both camps. While anarchy’s form of factory organisation is democratic, ‘management […] is not democratic’ (ibid) at all. Democracy is a word that is avoided like the plague in virtually all existing management journals, textbooks and business schools. It is avoided by business school scholars who otherwise claim to be democratic.

A second term on which management depends is hierarchy. The authors argue that ‘anarchists are particularly interested in networks rather than hierarchies’ (4). Inside hierarchical business schools, the term ‘network’ is used to divert attention away from the hierarchy. Almost without any exception, virtually all companies and corporations are hierarchically organised. In short, whoever says management, says hierarchy (Diefenbach 2013). A third, almost universally accepted and never questioned issue in management is that of ‘the importance of every organisation [to] have a leader’ (6). In short, the book aims to highlight two points: 1.) what are anarchist organisations and 2.) what can we learn when we contrast such organisations to current business organisations and how they are managed?

Perhaps one of management’s key pathologies is its staunch ‘authoritarianism’ (16). Set against this is what the theory of anarchism calls ‘prefiguration’ (ibid), which means ‘using organisational means […] that do not contradict the ends or purpose of an organisation’ (ibid). Put simply, ‘it is not okay to do something nasty now in the name of some bright future to come’ (17). If one would carry this through, it would mean the closure of virtually all companies and corporations. To avoid such heretic, if not outright subversive and seditionist thoughts, management and its even more ideological bedfellow managerialism (Klikauer 2013, 2015, 2019), has invented business ethics, corporate social responsibility, stewardship and rafts of other terms to camouflages its pathologies and criminalities.

Management’s pathologies are even stronger highlighted when one sees ‘anarchism as a doctrine that aims at the liberation of people from the political domination and economic exploitation’ (27). Management is a system that governs domination largely through something it calls human resource management (HRM). In HRM, human beings are mere human resources or Menschenmaterial, a Nazi term meaning human material.

Perhaps it might be true that ‘whoever denies authority and fights against it is an anarchist’ (27). This would mean that we live in a world of anarchism, albeit for many, without even knowing it. Management enshrines the very opposite. The authors correctly argue that ‘management is about control; the word derived from manus (hand) or maeggiare (to handle, especially horses)’ (31). It is even worse because maeggiare is also about domesticating horses. Management is about domesticating workers – top-down, as Fayol (1930) would have said.

On the top of the managerial hierarchy sits the ‘power elite (e.g. corporate board members, CEOs, managers) [with the goal of] shaping people’s values [and to] invoke a sense of loyalty and shared vision’ (60). For that, management employs experts in organisational behaviour while crypto-academic management writers talk of organisational culture defined as shared values even though managerial values are often implanted top-down through Fayol’s chain of command which still operates today. Inside companies and corporations, managers talk about corporate mission statements while business school academics legitimise them (Williams 2008). Set against all this is what the authors see as anarchism’s ‘refusal [of] all hierarchical organisations’ (61).

Virtually every unethical step management has taken has been ideologically legitimised by business ethics, which has not only morphed into an ideology but also into a ‘business ethics industry’ (77). This industry has been growing undeterred by the plenitude of mass killings, corporate crimes and global environmental vandalism (Ford Pinto, Bhopal, Exxon Valdez, Enron, Volkswagen, the list goes on). Outside and inside companies and corporations, business ethics remains an oxymoron. According to Jackall (1988: 115), business ethics boils down to six simple rules (76):

Business ethics never had any qualms with power. The opposite is the case. Business ethics is here to legitimise power, particularly the power of management. The classic definition of power sees it as the ability ‘to get others to do things that they wouldn’t do otherwise’ (87). This is the very foundation of management and its core legitimising agency of managerialism. Given its structural power, management might be seen as a form of structural violence that can be understood as a form of violence, wherein some social structures (e.g. companies and corporations) or social institutions (management) harm people by preventing them from meeting their basic needs. Yet management writers tend to avoid issues like structural violence. A large part of management and managerialism’s energies are spent convincing companies and corporations and society as a whole that authority, hierarchy, power, etc., are necessary. This ideology is sold as TINA: there is no alternative.

Furthermore, the authors emphasise that there are ‘cooperatives […] where ownership and control rest with members rather than outside owners [and there are] three million cooperatives on earth, providing jobs or work opportunities to 10% of the employed population. The 300 top cooperatives generate 2.1 trillion US dollars’ (100). Of course, these cooperatives are not all anarchist organisations, but many operate without ‘leadership and authority’ (111). Meanwhile, management carries on with ‘enunciative authority (wise man) and institutional authority (police officer)’ (113).

While many CEOs are reasonably competent in pretending to be wise men, management as a whole lives from the authority that comes with an office (Magretta 2012) and, of course, with workers made to accept the authority, the power of the managerial office and managerial leaders. It is not at all surprising that ‘business schools want their students to believe in leaders’ (120). They do so by trying desperately to divert attention away from the fact that leaders always mean followers, and that this is yet another relationship that excludes democracy.

Meanwhile, management lives on ‘techno-optimism’ (170), believing that the ‘development of technology is ultimately a good thing’ (ibid), that it can solve almost any problem like, for example, global warming. Many of the business school demagogues genuinely believe global warming can be controlled within the confinements of capitalism (Benson and Kirsch 2010). Yet anarcho-environmentalists like Bookchin, argue the contrary, emphasising the fact that not-for-profit ‘collaboration is our biggest resource’ (177), building on ‘diversity, spontaneity, mutualism, and horizontalism’ (179).

Much of what anarchism does is ‘to demonstrate the irrelevance of government and other centralized powers’ (189). Some anarchists seem to prefer ‘anarcho-capitalist entrepreneurs [who] do exist’ (220). Unlike management’s entrepreneurship that ‘takes place within a capitalist system’ (221), anarcho-entrepreneurs would be outside of capitalism. With such an alternative, entrepreneurship would be based on ‘mutual aid, voluntary associations, direct action, and self-management’ (225).

The book’s conclusion notes that ‘perhaps the most dangerous argument in mainstream textbooks, the one that is most insidious because it is rarely stated explicitly, is that [anarchist] ideals can never become common practice in business and management’ (241). What management textbooks need to do and have been done splendidly over many decades is to infuse business school graduates with the ideology that another world is not possible even though many people suspect it might be. Given what we are facing, it has to be made possible very soon.

In the end, Parker, Stoborod and Swann’s exquisite book on Anarchism, Organization and Management achieves what it sets out to do. It shows that another world, a non-managerial world, is indeed possible. It also shows that anarchist theory can most certainly encourage thinking critically about management and its more hideous bedfellow of managerialism.