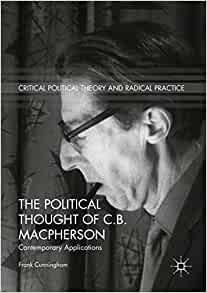 In amply confirming C B Macpherson’s contemporary relevance, Frank Cunningham has ingeniously found a fresh angle of interpretation, just when it seemed that scholarly research in this area was subject to the law of diminishing returns. That Cunningham has found something new to say about Macpherson nevertheless should not be a surprise. He was a junior colleague of Macpherson at the University of Toronto for many years, and has done more than anyone else to keep the Macpherson’s intellectual (and political!) legacy alive. This work is very much the product of ‘living with’ Macpherson over a long period. Cunningham seeks to take Macpherson out of the cloisters of academia and into the agora, so to speak. He demonstrates how Macpherson’s thought bears directly on contemporary socio-economic and political problems, in keeping with his deeply principled, yet pragmatic spirit.

This book however is more than just about ‘contemporary applications’, touching on many interpretive questions surrounding his work, including assembling fresh arguments defending Macpherson’s interpretation of Hobbes and Locke and his views on market socialism. Nevertheless, the main aim of the first part is to outline the character of his liberal-democratic socialist ‘project’, emphasizing the depth of his political and pragmatic orientation. Echoing Gramsci and some post-Marxists, he sought to construct a counter-hegemonic alliance against the dominant Western ideology that fused the values of liberal democracy, possessive individualism and anti-Communism (24-5), in the full knowledge that key terms such as freedom, equality and democracy are ‘essentially contested’ or ‘floating signifiers’. The devil lies in the definition.

Thus, liberal democratic-socialism, far from being an oxymoron, could be seen as natural companions, once the developmental individualism of liberals such J.S. Mill, T.H. Green and John Dewey is affirmed, and conjoined with the socialist vision of a society in which productive assets, including labour, land and other forms of wealth are under democratic control, involving both direct and representative democracy. Hence, the individual property right to exclude others would be superseded by the right to be included, through ‘socially responsible trusteeship’(10). The ontological imaginary of the possessive, proprietorial, consumer, accumulative self, so deeply ingrained in liberal thought, is superseded by a ‘human’ ‘developmental’ self, conceived as having the potential to become a creative, cooperative ‘doer’ in all its freely chosen and non-conflictual forms. Human flourishing would take place within a society of ‘developmental democracy’.

Macpherson espouses ‘thicker’ notions of freedom, equality and democracy, which have existed in both liberal and socialist thought. Yet Cunningham concedes that Macpherson’s qualified vanguardism meant that he did not stand four square in the liberal camp. Equally, his Marxist-informed critique of capitalism, based on his ‘net transfer of powers’ (exploitation) concept, did not make him a full-blown Marxist either. Although he saw working class activism as essential to his vision, he was reluctant to champion the idea of an exclusive proletarian revolution, stressing the importance of various social movements concerned with gender, peace, urban and environmental issues, which were more middle class. And he certainly had problems with the classical Marxist reform/revolution dichotomy.

Cunningham quite rightly suggests that such a labelling exercise (a ‘bad’ liberal or a ‘bad’ Marxist) is rather pointless, detracting from Macpherson’s genuine achievement. Perhaps more could have been said about Macpherson’s unique blend of Marxism and liberalism, how he translates Marx’s key concepts such as commodity fetishism (‘possessive individualism’) and exploitation (‘net transfer of powers’) by teasing out their ethical implications in terms of individual rights, in a way that a predominantly liberal Western culture would understand, untroubled by Marx’s explicit rejection of abstract, fuzzy moral discourse. Speculatively, he might be conceived as applying his textually forensic skills not only to key liberal texts but also to Marx’s, through an ethical reading of his ‘mature’ writings, initially having little knowledge of the ‘early Marx’. His embrace of this kind of discourse was most likely to have been inspired by the ethical socialism of the British ‘Red Professors’, Cole, Tawney and Laski during his stay in London in the 1930s. Politically, he could easily have followed Laski, his mentor at this time, who explicitly combined Marxism and liberalism and was involved in Popular Front activity, getting middle class liberals to unite with socialists to combat Fascism (Interestingly Cunningham notes that towards the end of his life he wrote some notes on ‘Marx for the middle class’ (48)). Arguably, and contrary to his own self-understanding, Macpherson could be portrayed as a prototypical ‘post Marxist’, in the sense of ‘living’ with and without Marx.

In keeping with the thrust of the book, the middle section highlights the specific character of his theory, as a theory for political practice, not requiring deep philosophical underpinnings as proposed by some fellow Canadians. He portrays Macpherson as a ‘non-philosophical political theorist’ (57), who deliberately avoided formalizing his approach within an over-arching philosophical system, whether Critical Theory or Hegelianism. His thinking was closer to Aristotle’s phronesis, or ‘practical wisdom’, enabling philosophers of different stripes to unite around a political project.

Cunningham, in wanting to distance Macpherson from Critical Theory perhaps goes too far in suggesting he did not employ a dialectical approach, involving immanent critique, especially in his understanding of liberalism with its ‘possessive’/’developmental’ dichotomy (61). Macpherson’s point could be that contradictory logics of these two versions of liberalism, whose core value is individual freedom, could only be resolved if capitalist property relations were transformed, delivering substantive freedom for all.

Cunningham correctly acknowledges Macpherson’s reluctance to justify his normative position in philosophical terms, but could this be because he shared with Marx a recognition of the limitations of philosophy in helping the oppressed to emancipate themselves? The value of positive freedom was ‘out there’ so to speak, and like Marx he sought to make good the claims of the French Revolution of 1789 that were deeply embedded in Western political thought, by winning the ‘battle for democracy’ (Marx).

Macpherson’s engagement with philosophy (but not at the expense of understanding the capitalist world in all its forms) to a greater extent than Marx, could be seen as Cunningham suggests, as part of a Gramscian-style counter-hegemonic ideological manoeuvre, given the strength of the possessive individualist version of liberalism. Cunningham also reminds us that freedom, equality and democracy are ‘essentially contested concepts’, meaning that endless philosophical reflection would take academics even further away from everyday struggles of those attempting to realise these ideals. Macpherson’s studied avoidance of getting ensnared in philosophical disputation may also have been a pragmatic decision, grounded on an academic division of labour, wishing to play to his own strengths. Naturally, he welcomed the company of other academics when they philosophically supported his vision (63).

Indeed, the third section of the book of ‘practical applications’ does involve ‘good company’ arguments in support of a ‘Macphersonian’ ‘orientation’, when applied to contemporary issues. This ‘orientation’ entailed a cross disciplinary methodology, a non-philosophical, political theory, a liberal-democratic ‘vision of a developmental democratic society’ accompanied by a radical, yet realistic strategy (92-3). This template owed much to Mill and Marx, and perhaps his early mentor Harold Laski.

Cunningham skilfully weaves Macpherson’s ideas into a number of contemporary discussions on a variety of questions issues, capturing Macpherson’s ‘essence’ as a deeply penetrating, principled yet pragmatic thinker, with abundant insight into the present human (market) condition and an ethical vision to match. He does not claim the Macpherson had all the answers. Only democratic deliberation can perhaps imperfectly solve some of what might be termed the ‘essentially contestable’ questions. Nevertheless, as he rightly claims if one accepts Macpherson’s politico-ethical principles that should underlie a truly ‘human’ society, then Macpherson has much to offer, whether helping debunk the claims of neo-liberals in defence of markets, or arguing for bottom-up democracy in relation to global governance, or opposing the ontology of ‘infinite’ consumerism in relation to environmental destruction and championing a developmental democratic culture, or proposing a notion of social trusteeship when it comes to intellectual property rights vis-à-vis international corporations, or developing an anti-racist, anti-sexist stance through the prism of developmental democracy, or critiquing the neo-liberal, commodified city.

Leaving aside the likely calamitous fall-out from the Covid pandemic, offering many opportunities for a ‘Macphersonian’ intervention, there are other issues that Cunningham could have tackled, such as universal basic income and anti-liberal democratic populism, perhaps requiring a ‘retrieval’ of a Popular Front strategy for constitutional reform. In the so-called ‘liberal democracies’ such as the US and United Kingdom, raw neo-liberalism has had a huge disempowering effect, perhaps taking us back to the roots of Macpherson’s thinking in the 1930s. These suggestions underline the fecundity of the Macpherson ‘orientation’, amply demonstrated by Cunningham, not only in ‘retrieving’ Macpherson, but also in effect embracing a much larger tradition of liberal democratic socialist anti-capitalism. This tradition is manifest in the demands and modus operandi of recent movements supporting amongst others Bernie Sanders, Jeremy Corbyn and Podemos. Cunningham has performed an invaluable service for those who put a common humanity at the centre of their ethico-political reflection.