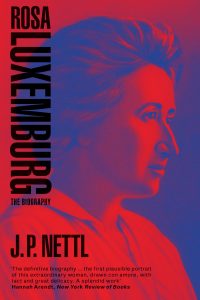 Rosa Luxemburg remains an inspiration for the socialist struggle, as for many other emancipatory projects that have their roots in staunch anti-capitalism. Especially today, for a left that has been coopted by woke neoliberals, a left that is little more than a bundle of renegades, Luxemburg’s voice should be louder than it ever was. If one were to break down her commitments to a holy trinity of Luxemburgian thought, it would be: Socialism, Democratic Participation, Internationalism. Everything else – the abolition of racism, sexism, ableism, speciesism and environmental prometheanism – will follow from that.

Luxemburg is now perhaps more important than ever. Or has never not been important. Verso’s new unabridged reprint of J.P. Nettl’s two-volume biography, which was originally published in 1966 with Oxford University Press, is still likely to be the most detailed and comprehensive account on the life and work of Rosa Luxemburg today. It should be an essential read for every self-proclaimed socialist activist, historian and thinker. That’s because, as Nettl might argue, there is no such thing as socialism without Rosa Luxemburg. Nettl even goes so far to say that Luxemburg ‘made Marxism real and important in a way which neither Lenin nor Kautsky […] was able to achieve – even more so than Marx himself’ (7). If ‘real and important’ means humanitarian and politically shrewd, this reviewer is happy to agree.

The most astonishing and praiseworthy aspect of the book is how Nettl managed to condense Luxemburg’s writings in German, Russian and Polish into a single coherent narrative which links her theoretical work to her life and times. Yet, as a point of critique, the structure of the book could be clearer. At points, it feels as though the specter of post-structuralism was running through Luxemburg’s biography, for Nettl tends to make temporal jump and create redundancies. Furthermore, the two ‘theoretica’ chapters on Luxemburg’s contributions to the Marxist critique of political economy (which, frankly, she turned upside down) and the question of ‘nationalism vs. internationalism’ are oddly placed. We might assume that the author didn’t want to decide on whether to tell the linear story of Luxemburg’s life and sprinkle it with some of her theoretical works as side notes, as most biographies of political figures do, or, as most philosophical introductions to key thinkers do, prioritize a discussion of the theoretical concepts while adding extensive biographical notes. The post-structuralist historiography cum theory that is Nettl’s ‘Rosa Luxemburg’ tries to­­ – sometimes successfully, sometimes unsuccessfully – square those approaches. It draws on, at the time of its first publication, neglected and previously unknown material, mostly letters from and to Luxemburg­­ – letters from and to Berlin, Poland, Zurich and prison. Embedded into their historical and personal context, Luxemburg’s writings have even more punch, vividness and revolutionary desire than they already have on their own. The historical and personal context also helps to understand the controversies around her persona and thinking. However, the controversy surely arose not only from Luxemburg’s opposition to the imperialist and militarist tendencies amidst many of the Social Democrats, as Nettl suggests, but also from the latently sexist and ableist attitudes of the latter. While Nettl is very perceptive of Luxemburg’s personal struggles, he doesn’t manage to properly connect them with prevailing oppressive social structures. After all, she was a disabled Polish-Jewish woman with a strong accent. The attacks on her from within the SPD as well as the right were far from subtle. Nettl certainly has a blind spot for Luxemburg herself being the object of oppression. This blind spot suggests that failures and personal battles can be reduced to flaws in her theoretical contributions and political activism, which could be construed as unfair.

The biographical dimension of Nettl’s work is extensive. It retraces Luxemburg’s youth, her activism in the Polish socialist movement as a young woman, her exile in Zurich, all her heated debates with Bernstein, Lenin, Kautsky, Plekhanov and the whole Second International. The attention to detail of Nettl’s scholarship is simply astonishing. It, of course, also covers her involvement and heated disputes with the SPD, leading to her murder in January 1919. Most prominently figures Luxemburg’s relationship with Leo Jogiche, with whom she first discussed her thoughts on class struggle and socialist strategy. Nettl emphasized her formative years in Poland before the first World War, which he links to her theoretical writings on nationalism, party organization, globalization and reformism.

While Nettl makes clear that his work is not – at least not primarily – an exegesis of Luxemburg’s contribution to Marxist theory, and that he wishes not to partake in a philosophical discussion, one cannot resist painting a philosophical portrait of Nettl’s Luxemburg, for it breaks, in an interesting way, with the incoherence of spontaneism and determinism that is commonly but wrongly attributed to Luxemburg’s writing.

Integral to Nettl’s Luxemburg is also the notion of capitalism’s impending collapse. Nettl nicely draws the lines from her economic work, The Accumulation of Capital, in which she analyzed the contradictions of capitalist imperialism, to her perhaps most celebrated work, Social Reform or Revolution. It is ‘the concept of a breakdown, of a social catastrophe […] a cataclysm’ that follows from her economic work, as she argued during the Bernstein Debate, which she thinks makes Marxism a revolutionary practice – ‘the cornerstone of scientific socialism’ (Luxemburg 1900) – rather than a variety of reformism. Nettl’s Luxemburg­­ is deeply opposed to mitigating capitalism by piecemeal reform.

The Accumulation of Capital plays a key role in Luxemburg’s thought as it seeks to unite her spontaneism, determinism, anti-imperialism and anti-nationalism under one coherent economic logic. Central to this is her observation that capitalism cannot exist without constant expansion to ‘outside markets’. Imperialism becomes the attempt to secure those outside markets. Taken to its perverted limit, the process of expansion leads to the ‘exclusive and universal domination of capitalist production in all countries and for all branches of industry.’ At that point, there are no other outside markets left, and ‘accumulation must come to a stop […] the collapse of capitalism follows inevitably, as an objective historical necessity.’ (Luxemburg 1913) This dooms-day scenario follows from the economic limit of capitalism, hence without the need for socialist organisations interacting on the economic structure. In today’s leftist discourse, this would make a perfect case for accelerationism. Accelerationism would also follow from ‘her belief that the economic laws of capitalism should not be short-circuited, much less held up’ (836). But Luxemburg never actually went into this direction. Why wait until capitalism undermines itself? Spontaneous uprisings must occupy the ruptures that are created along the way. No need for organization and the vanguard. At some point, capitalism will be weak enough, and the uprising strong enough, to bring about socialist transformation.

In her The Accumulation of Capital, Luxemburg also discusses the murderousness of capitalist expansion: the suspension of local agricultural economies, the destructiveness of international loans, the harm of militarism, etc. Something that Nettl misses out on is the non-economic disaster, the human misery that follows from economic misalignment, and of which Luxemburg was perfectly aware. She puts it such:

For the first genuinely capitalist branch of production, the English cotton industry, not only the cotton of the Southern states of the American Union was essential, but also the millions of African Negroes who were shipped to America to provide the labor power for the plantations, and who later, as free proletariat, were incorporated in the class of wage laborers in a capitalist system. Obtaining the necessary labor-power from non-capitalist societies, the so-called “labor-problem”, is ever more important for capital in the colonies. (Luxemburg 1913)

There are many theoretical inadequacies to be found in Nettl’s account of Luxemburg’s work on political economy, but these have already been assessed elsewhere (Mattick 1967).What is largely absent from Nettl’s work is Luxemburg’s analysis of colonial exploitation and slavery, as well as the exploitation of nature and of unpaid care-work. In the work of Marcel van der Linden, it is precisely those marginal but always very heartfelt deliberations on what it means to be human, on exploitation beyond the exploitation of the white and male proletariat, on how to bring about truly universal human emancipation, that make Luxemburg the ‘the first Marxist who tried to develop a truly global concept of solidarity from below’ (Van der Linden 2016: 153).

There is also much more to say about Luxemburg’s own struggles for recognition and acceptance in a sexist culture. Her relationship with Clara Zetkin is passed over quickly. The question of whether Luxemburg really thought that the women’s struggle was reducible to class struggle is not assessed at all, although it is widely assumed. In the introduction to the abridged version of Nettl’s Rosa Luxemburg from 1969, Hannah Arendt even describes her as having a ‘distaste for the women’s emancipation movement’. It is of course a horrible accusation for someone who sought universal human emancipation and therefore detested petty-bourgeoise feminists – those woke, liberal, femitocrats who had already fifty years prior to Luxemburg’s active days defamed Sojourner Truth (Taylor 1998).

How fair is it to raise those points against Nettl, who, after all, wrote this book some fifty years ago? The book appeared during the Cold War, at a time in which socialism had succumbed to social democracy and May 1968 wasn’t yet on the horizon. Still, Nettl felt the need to vindicate both the relevance of his treatment of Luxemburg as well as Luxemburg’s thought itself for what were then the present political constellations. If Nettl were to start his project today, we can be sure he would pick up on different issues. One expects that over the coming years, we will see an upsurge in scholarship on Luxemburg on feminism, racism, ableism and environmental protection (c.f. Holmstrom 2019; Hudis 2019). The excellent introduction by Peter Hudis picks up on various of the concerns touched upon here.

Luxemburg should be a starting point of socialist thinking today, not least because her work goes beyond the binary alternatives of liberal capitalism or statist communism. It may also provide the basis for a renewed Marxist feminism, anti-racism, anti-ableism, anti-speciesism, and environmental thought that we should take seriously. It is a way to counter the cooptation of emancipatory projects by a guard of hyper-woke neoliberals.

What we may take from Nettl’s excellent work is that Rosa Luxemburg was right to make herself an icon of the socialist struggle when, in her 1919 ‘Order prevails in Berlin’, shortly before her murder, she marked her writing: ‘I was, I am, I shall be!’