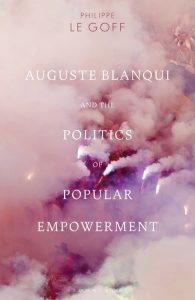 Doug Greene is an independent Marxist historian living in the greater Boston area. He is the author …

During the nineteenth century, arguably no name invoked as much fear among the bourgeoisie as Louis-Auguste Blanqui (1805–1881). He was the heir to both the Enlightenment and the Jacobin traditions who took both to their communist conclusions. Blanqui’s revolutionary strategy was decidedly simple: a small and secretive elite would lead an insurrection and create a socialist republic. Blanqui took part in at least a half-dozen failed insurrections and was at the center of every major upheaval in France during his lifetime. Each one failed, and he spent more than thirty years in prison for his revolutionary commitment. However, Blanqui never surrendered to despair but returned to fight again. His dedication was recognized by Karl Marx and Friedrich Engels, who hailed him as ‘the noble martyr of revolutionary communism’ (11). Yet since his death, Blanqui has been largely forgotten by the socialist left and, when he is remembered at all, it is largely as meaning ‘Blanquism’ or foolhardy ultra-leftist adventures.

Considering the derision attached to his name, Philippe Le Goff’s attempt to take Blanqui seriously as a revolutionary political thinker and philosopher is most welcome. Le Goff’s work is meticulously researched, drawing upon both Blanqui’s published works, and his unpublished manuscripts only recently translated into English. Auguste Blanqui and the Politics of Popular Empowerment argues that central to Blanqui’s thought is ‘his insistence on the capacity of conscious and organized collective political action to bring about radical social change, and the force and consistency with which he articulated this view’ (14).

At the heart of Blanqui’s politics is the idea that collective liberation requires conscious volition. According to Blanqui, the capacity for reason is what distinguishes humans from animals. Reason enables people to understand the world. As a result, Blanqui argues that education and enlightenment is vital to liberation (34). Considering the power of reason, the ruling class uses the ‘conscious and organized deception’ (35) of education and religion to keep the masses in a state of ignorance. Thus, a majority of people do not understand the real sources of oppression. Since bourgeois society is in a latent state of civil war, the people will fight back, but lacking enlightenment, they will be unable to end their misery.

For the people to achieve liberation, they need enlightened leadership from the revolutionaries. How does this vanguard reach the masses? According to Le Goff, Blanqui championed the power of the written word and popular press ‘as militant interventions, as weapons in the struggle against oppression’ (39). The reality of political repression meant that enlightenment was not possible, and the vanguard could only survive by resorting to conspiracy. As Le Goff says, ‘for Blanqui and those like him who sought to persist with a revolutionary project the alternative was simple: conspiracy or capitulation’ (155-156). Without an enlightened elite to lead the masses, there would be no progress and a regression to barbarism.

After the revolution, Blanqui believed that the people would need to be reeducated in the values of the new society so that they could be fit to rule. This was to ensure that there would not be a restoration of the old ruling class and oppression, such as there was after the revolutions of 1830 and 1848. Le Goff says that for Blanqui ‘enfranchisement without enlightenment is meaningless at best, a dangerous political sham at worst’ (40). Only after the people have undergone a certain period of tutelage would they be able to rule.

However, Le Goff notes the contradiction in Blanqui’s project between the need for popular education and enlightenment as a precondition for revolution, but that an enlightened people cannot act as a revolutionary force. By staking so much on conscious volition, Blanqui ‘does assume that so long as an actor is not intellectually conscious it remains incapable of exercising the rational will that results animates a free, egalitarian society whose object is the common good’ (141). This tension between enlightened and ignorance means that Blanqui often tends towards an elitist and substitutionist politics that assumes ‘a vanguard can take action in the name of, rather than with, the people’ (184).

According to Le Goff, Blanqui’s voluntarism means that he privileges conscious volition, philosophy and ideas as the makers of history: ‘material life is a reflection of this thinking’ (26). Blanqui’s idealist approach to historical change is the opposite to Marx’s conception of historical materialism, which sees economic conditions as determinate in the last instance. Le Goff praises Blanqui’s conception as an ‘open and contingent view of human history, its privileging of political possibility over historical necessity and its opposition to any form of fatalist teleology’ (189).

However, privileging radical contingency tends to divorce the political subject from history, rending politics unthinkable and impractical. While Blanqui was certainly justified in condemning theories (such as political economy or positivism) that justified the existing social order as natural or divine, he bent the stick too far by saying that recognizing political, social or economic laws as a ‘bad joke’ (165). To paraphrase what Engels once said, freedom comes from recognizing necessity. Just as communists must know the art of war and the technical side of insurrection, they also need to understand the dynamics and internal contradictions of capitalism to recognize its tendency to breakdown, the historical role of the working class and the conditions that comprise a revolutionary situation. Le Goff admits that Blanqui’s voluntarism meant he gave scant attention to socio-economic processes (187-188). As a result, Blanqui only developed a one-sided theory that could not lead to revolution. By contrast, Marx, Lenin and Trotsky overcame Blanqui’s theoretical weakness by correctly understanding the subjective and objective conditions needed for revolution.

Among the other positive aspects of Le Goff’s study is one of the most sustained discussions of Blanqui’s astronomical work Eternity by the Stars (1872), made famous by the German Marxist Walter Benjamin. Benjamin’s reading of Blanqui’s work has popularized the view that it signaled his political surrender and rejection of the concept of progress, in contrast to his theory of history. Not only did Blanqui never surrender, but this work is perfectly in line with his view of history. According to Le Goff, Eternity by the Stars represents ‘Blanqui’s most sustained exploration of the manner in which the radical contingency of human history is distinct from the necessity of the natural world and the infinity of space and time, from the eternal and boundless cosmos’ (181-182).

Le Goff should be commended for providing a detailed reconstruction of Blanqui’s scattered political philosophical ideas. He also goes further in highlighting how Blanqui drew upon Jean-Jacques Rousseau’s idea of the general will, and he found similarities to the ideas of Niccolò Machiavelli, Che Guevara, Antonio Gramsci and Frantz Fanon. While Le Goff discusses the importance of enlightenment for Blanqui’s political project, he provides no focused discussion of the Enlightenment as such. This is an unfortunate omission. Blanqui not only was a champion of mass education, but he believed that it must be founded on the materialist, scientific and rationalist philosophy of the Enlightenment. In line with his Enlightenment worldview, Blanqui defended the principles of the French Revolution – secularism, republicanism and egalitarianism – as necessary for socialism. However, he knew that the Jacobins had not realized those principles, but that only socialism could achieve them. Blanqui himself recognized that ‘communism only becomes possible through enlightenment; it is its necessary end-point’ (152).

Blanqui’s defense of Enlightenment universalism often clashed with his voluntarism and nationalism. He was not able to resolve those tensions and develop a consistent worldview. After his death, his followers split and had to choose between the universal elements of his philosophy culminating in Marxism or abandoning them for a voluntarist cult of action and virulent chauvinism culminating in reactionary proto-fascism. Today, it remains a task for revolutionaries to resolve those tensions in Blanqui’s thought by defending the radical and universalist legacy of the Enlightenment.

Le Goff identifies three areas where Blanqui speaks to the present. First, Blanqui recognizes that there is no historical fatalism, but only political choices. Second, Blanqui acknowledges agency and how to sustain a collective project for liberation. Finally, Blanqui foregrounds the need for strategy: how do revolutionaries take and hold power? How to turn localized protest and mass movements into a collective will leads Blanqui to advocate the need for leadership, discipline and organization. Blanqui’s questions are the ones that every revolutionary needs to ask if we are serious about victory. However, his own answers were found wanting. As Le Goff correctly states, Blanqui ‘correctly diagnoses this basic problem, even if his own remedies are, needless to say, far from satisfactory. The solutions remain ours to discover’ (192).

Indeed, when it comes to revolutionaries asking the right questions today, there is great value in returning to Blanqui. And Philippe Le Goff’s work is a welcome guide to this remarkable figure.