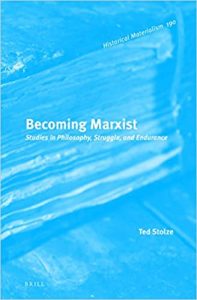 Ian Leask is a lecturer in philosophy in the School of Theology, Philosophy, and Music, Dublin …

For more than a quarter of a century, Ted Stolze’s work has made an important contribution to Marxist thought circulating around the conjuncture of Spinoza and contemporary French philosophy; much of this collection constitutes a scholarly endowment from him for any further academic engagement with
‘The New Spinoza’ and its effects. Perhaps more importantly, though, the work as a whole provides an exemplary illustration of how we might ‘strive to persevere’ in creative, intellectually informed, opposition to social injustice: Stolze’s book is not so much about ‘providing final answers’ as it is the manifestation of Marxist thinking as an open, organic, unfinished, process.

The 18 pieces collected here – most of them previously published – cover an enormous spread: Spinoza, Althusser and Deleuze are no doubt foundational concerns, but there’s also, to cite a few examples, deep engagement with Paul of Tarsus and Simon Peter, a reading of Hobbes via Winstanley, a kind of confrontation with Žižek over Hegel (and Spinoza), a sharp critique of Habermas (on the possibility of real social change), as well as practical (and exceptionally well informed) injunctions regarding climate change and Islamophobia. Stolze’s expansive range offers a serious – and wonderful! – challenge to the exigencies of a relatively brief review.

However, it seems that we can identify a consistent concern that runs through the collection as a whole. Very crudely speaking, the issue reduces to something like this: how to retain the possibility of agency, resistance and praxis alongside fidelity to a ‘philosophy of immanence’ that might imply necessitarianism? Put otherwise: what exactly is the subject of change, given a rejection of teleology, transcendental viewpoints, and so much of ‘subjectivity’ itself? The tensions here may be beyond any final resolution; nonetheless, Stolze’s engagement with them is fascinating, and fecund.

Two particular nodal points are worth highlighting, in this respect. First, in Chapter 4, Stolze provides a typically engrossing reflection on the question of individuality as both produced (i.e., ideologically interpellated) and productive. Drawing on Lucien Sève, he suggests that Althusser’s functionalist approach
needs dialectical finessing: for sure, social relations are massively significant in the formation of ‘individuality’; but, given Althusser’s own strictures regarding the complexity of historical time and its unfolding, individuation should never be taken as a uniform process. As Stolze puts it: “every individual-in-process is born at a precise conjuncture of world history, enjoying specific opportunities and confronted by specific material and ideological obstacles” (82). No two ingenia are ever the same, we might say (following Spinoza) – and so individuation must be seen to be as variegated as the wider process within
which it occurs.

The point is perhaps adumbrated rather than fully developed. Nevertheless, we can see it broadened by considering a second nodal point, in Chapter 6, where Stolze turns to a discussion of ‘affective transition’ in Spinoza, or how the passions (especially glory and indignation) might be channelled, sublated even, into a kind of collective agency. The discussion – engaged but subtle – seems heavily informed by Negri: for example, Stolze asserts at one point that “the glory of politics is none other than the glory of the multitude in action as it imagines itself and its activities, and rejoices in its own collective powers” (130). But, again, it seems to illustrate what, for Stolze, immanent political action might mean and what it might involve.

These would seem to be something like Stolze’s operative principles, then: subjectivity retained, but without discarding a kind of neo-Althusserianism (and without ceding any significant ground to Badiou); and collective (or trans-individual) militancy situated within Spinozistic immanence. This is not supposed to be a system – sclerotic and dogmatic ‘laws’ are exactly what Stolze wants to oppose – but, instead, a broad strategic grid for wider interventions.

With this ‘grid’ in mind, we can better appreciate some of the various moves Stolze makes throughout the collection. For example, the first chapter – which typifies Stolze’s careful but committed philosophical negotiations – posits practical engagement as a kind of logical conclusion to a consideration of Althusserian materialism. Locating Althusser’s thought within a wider discursive current (rather than treating it as emerging ex nihilo), Stolze posits Lenin – unsurprisingly – as an important predecessor. But he also highlights the significance of Jean-Toussaint Desanti, a philosopher whose muscular Stalinism and interest in phenomenology might seem to place him poles apart from Althusser, but who is the subject of a partial recovery here: as Stolze reminds us, Desanti introduced Althusser, not only to Spinoza, but also to a
materialist reading of idealist-realist distinctions. In turn, the main body of essay becomes a reflection on the complex ‘interdependency’ of idealism and materialism, on the necessary impurity of philosophical positions, and – given this lack of fixity and the need for continual philosophical adjustment– on the
concomitant imperative for a ‘Marxist practical reasoning’.

Elsewhere, we find further interventions that focus on Spinoza but seem to cash out what this ethics might entail. We could even regard this as a kind of ‘dialectical’ move on Stolze’s part: apparently neglected issues – like love, fortitude, and eternal life – are integrated into Marxist discourse; meanwhile, Spinoza’s own explicitly ethical concerns are treated, consistently, in their social and political contexts. Stolze remains unremittingly opposed to any depiction of Spinoza as proto-liberal who offers a route to individual tranquillity (in the face of both mob and tyrant). Instead, Stolze’s Spinoza posits “an indefinite enlargement of collective beatitude” (147), in which a solely individual freedom is impossible.

Needless to say, the expansive, generous, nature of Stolze’s text provides so much for discussion and critical consideration. (At times, there is maybe too much generosity: engagement with Carnap, for example, hardly seems worthwhile.) Here, I’ll highlight issues in two chapters which, hopefully, relate
to the ‘operative principles’ identified above.

First, Stolze’s final chapter typifies the book’s range, and its author’s joy in intellectual exploration; nonetheless, aspects of this rich piece seem to sit in tension with other elements of Stolze’s project. Stressing the importance of Aristotle, for Marx, seems beyond dispute (a point already articulated by James Daly, George Mc Carthy, and Scott Meikle, amongst others). But Aristotle’s ethics are surely teleological to their core; and so any reconciliation of Aristotle and Spinoza (in terms of a Marxist philosophy) seems like an arduous task – and one that needs more work than what’s evidenced here.

The problem isn’t restricted to Aristotle’s ethics, however. In the same chapter, Stolze also provides a fascinating engagement with the question of ‘agent intellect’ – such a significant philosophical and theological issue for more than 1500 years, yet barely known today. Roughly speaking, Aristotle suggests that individual intellectual activity is not self-explanatory, and requires the existence of some kind of activating agent. Greek, Jewish and Muslim thinkers continue to interrogate the notion; and Averroes will
eventually posit something like a general repository of ideas which (finite) ‘individual thought’ plugs into, temporarily.

Stolze seems right to suggest that Averroes’ contribution might constitute a subterranean source for Spinozism. But, in a sense, this very identification highlights a central tension here (in terms of ‘subject’ vis-à-vis ‘structure’). In the 13 th century, after all, Aquinas, in a strikingly proto-modern critique (motivated in part by fears for the doctrine of the immortal soul), suggested that Averroes renders redundant the notion that ‘I think X’, and that he negates moral responsibility and even individuation. These are significant questions – and yet, despite Stolze’s own stress on action and agency, the implications of Averroes’ commitments aren’t really addressed. (Simply deploying a label like ‘Right Aristotelian’ isn’t adequate, philosophically, to the challenges involved here.)

The second concern takes us to an issue that seems crystallized in Stolze’s text, but which constitutes a greater problematic for so many of us inspired by Spinoza’s work. There is no doubting Spinoza’s revolutionary achievement in philosophy (and – as Jonathan Israel reminds us – in wider culture). He gives us, as Althusser puts it, the first great exposé of ideology; he shatters fictions that both inflate and enslave us; he grounds his analyses in the flesh and blood of affects. And yet, whatever the significance of ‘joy’ and even a non-religious ‘beatitude’ within his system, there’s a deep ambiguity in his political thought
which seems slightly down-played in Stolze’s collection. Quite how we read Chapter 18 of the Theological-Political Treatise, where Spinoza seems to suggest that revolution merely replaces one set of tyrants with another, remains an open issue (as Stolze is keen to show); and, for sure, the final, unfinished, Political Treatise presents, far more positively, the unified multitude increasing its power via its natural right to resist and rebel. Nevertheless, the resolutely anti-utopian Spinoza remains forever alert to the ineradicable force of fear and violence, and to how solidarity can be profoundly hateful. Strategically, Stolze’s focus is understandable, in terms of the ‘creation of affects’. But I think we do well – and not just hermeneutically –
to remain alert to a certain pessimism in Spinoza’s politics.

Overall, these critical remarks might reduce to something like this: in being philosophically generous, open-ended and non-dogmatic, we also need to be careful about leaving too many loose ends. The most significant point for us to bear in mind, nonetheless, is Stolze’s great achievement in demonstrating the
process of creative, genuinely plural, Marxist engagement.