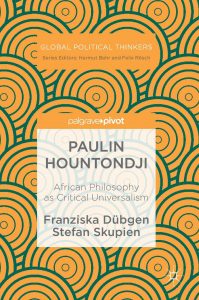 Zeyad el Nabolsy is a PhD student in Africana Studies at Cornell University. He works on African …

Franziska Dübgen and Stefan Skupien have written a much needed overview of Paulin Hountondji’s work. While Hountondji is quite well known for his critique of ethnophilosophy, his later intellectual work on scientific dependency and his political writings are not as well known to non-specialist Anglophone readers. This partially stems from the fact that while his later work on scientific dependency has been translated into English, it has been published in the form of short articles or through transcribed interviews, which makes it difficult for a reader to situate it in relation to Hountondji’s work on ethnophilosophy. Moreover, the Anglophone reception of Hountondji’s explicit political writings has been hindered by the fact that many of them have not been translated into English, e.g. his 1973 book Libertés: Contribution à la Révolution Dahoméenne, which was written as a prescription of what needs to be done by the military regime in order to end neo-colonial dependency in Benin in the aftermath of the military coup led by Mathieu Kérékou in 1972, has still not been translated into English. Dübgen and Skupien have written a book that will contribute to remedying this neglect by contextualizing Hountondji’s work on scientific dependency and his political writings in relation to his better known writings on ethnophilosophy.

The second part provides an account of Hountondji’s political writings that situates them biographically, e.g. the connection between Hountondji’s experiences in Mobutu’s Zaire and his suspicion of any politics of cultural authenticity (90). Dübgen and Skupien also emphasize the Marxist nature of Hountondji’s political writings (96). In addition, they provide a helpful account of his tenure as education minister in Benin in the aftermath of the National Conference of 1990. This allows the reader to discern some of the inconsistencies between some of Hountondji’s theoretical prescriptions and his decisions as education minister; while his theoretical work on scientific dependency emphasizes the importance of developing basic scientific research in African countries, his tenure as education minister in Benin focused on expanding vocational training (101).

The third part of Paulin Hountondji emphasizes the contemporary relevance of Hountondji’s thinking by relating his work on scientific dependency, and the need to integrate endogenous knowledge with modern science, to contemporary discourse around de-colonization and epistemic delinking. When Hountondji speaks of the integration of endogenous knowledge with modern science, he quite clearly means testing the knowledge claims of endogenous knowledge systems by means of the procedures of hypothesis testing that characterize the modern sciences. Thus, he does not particularize modern science as just one system of knowledge amongst other equally valid systems of knowledge, which is the approach taken by some contemporary de-colonial thinkers (e.g. De Sousa Santos, Nunes and Meneses 2008: xlviii). We can therefore say that Hountondji offers an alternative approach to ‘de-colonial’ approaches to the study of scientific knowledge in the ‘peripheries’ (119). Hountondji’s rejection of culturalism with its assumption of monolithic, self-contained cultural systems, also allows him to emphasize the internal differentiation of all cultures (136). Hence, one will never catch Hountondji speaking of a uniform ‘Western philosophy’ or ‘Western epistemology’ as some contemporary de-colonial thinkers tend to do (e.g. Ndlovu-Gatsheni 2013: 11, 44). To this extent, Hountondji’s work shows that an anti-colonial and anti-neocolonial approach to the study of scientific knowledge in the ‘peripheries’ need not abandon the modernist belief in the universal validity of modern science, and need not deploy monolithic caricatures of ‘Western science’ or ‘Western epistemology’.

While Dübgen and Skupien have provided an excellent overview of Hountondji’s work, their presentation of his transition from the critique of ethnophilosophy to the study of scientific dependency raises important questions which are not answered in the book. The central issue is how to understand Hountondji’s metaphilosophical view of the relationship between philosophy and science. Dübgen and Skupien register the dual influence of both Althusser and Husserl on Hountondji’s conception of philosophy as science (33). However, they do not adequately explore the tensions between those two influences. For Althusser, philosophy is dependent on the empirical sciences, i.e. it is dependent on sciences that deal with factual existence. According to Althusser, philosophy can contribute to organizing the empirical sciences, but it does not aim at justifying them (Smith 1980: 67). Hountondji himself adopts this interpretation of Althusser (Hountondji 2002: 11). Now it is clear that this conception of philosophy as a theory of science is radically different from Husserl’s conception of philosophy as a theory of science. Husserl did not think that philosophy is only a second-order discourse which is parasitic upon existing empirical sciences. Instead he conceived of it as justifying the empirical sciences. For Husserl the empirical sciences cannot serve as a foundation for philosophy because they are methodologically naïve insofar as they proceed by assuming the existence of their objects and our epistemic access to them (Husserl 1965: 85). Indeed, for Husserl, the empirical sciences require epistemic justification from philosophy since it is only philosophy that can validate their methods (Lauer 1965: 44). Husserl’s understanding of philosophy ‘as a strict science’ [als strenge Wissenschaft] is thus not compatible with Althusser’s understanding of philosophy as a second-order discourse that is parasitical upon scientific discourse. Moreover, while Hountondji notes that for Husserl ‘philosophy in general is first of all reflection on science’ (Hountondji 2002: 31), it is important to recognize that for Husserl, phenomenology, qua eidetic science that dealt with idealities, is not dependent on any sciences that deal with factual existence (Kusch 1995: 183). In fact, it was conceived of as an a priori science that would provide the foundation for all the other sciences (Friedman 2000: 44). Hountondji himself acknowledges ‘the enormous distance separating the author of Formal and Transcendental Logic from that of For Marx’ (Hountondji 2002: 11). However, to speak of an enormous distance is to understate the problem, for they hold logically contradictory conceptions of philosophy as a theory of science, i.e. to uphold both the claim that the empirical sciences do not require epistemic justification from philosophy and the claim that philosophy is tasked with providing the empirical sciences with epistemic justification is to fall into logical contradiction.

It seems that based on Hountondji’s later work on the sociology of scientific knowledge, it is the influence of Althusser that prevailed on this point. For Husserl’s understanding of philosophy as a theory of science does not seem to imply that a philosopher should study the history of science and the actual development of the different empirical sciences under different social conditions. In fact, Hountondji explicitly draws on Althusser’s conception of the relationship between science and philosophy in order to argue that philosophical revolutions are dependent on scientific revolutions. Althusser claimed that because philosophy is parasitical upon science, its development is tied up with the development of science, to which, of course, it can sometimes contribute by clarifying certain conceptual issues which may block further scientific progress (Althusser 1971: 41). The adoption of this Althusserian perspective explains why Hountondji thinks that African philosophy will not really thrive unless an autonomous modern scientific discourse develops on the African continent. This in turn explains his later turn to the study of scientific dependency in African societies.

Hountondji adopts Althusser’s claim that philosophical breakthroughs are ultimately dependent on scientific breakthroughs (Hountondji 1996: 97). However, Hountondji’s reliance on Althusser is problematic insofar as Althusser, by his own admission, did not in fact study the history of philosophy or the history of science in any rigorous fashion (Althusser 1993: 148, 167). Indeed one of the standard criticisms of Althusser is that despite his claim that philosophy is a meta-science (i.e. a theory of the sciences), he did not undertake any serious study of the history of science (Fraser 1976: 458). The problematic nature of Hountondji’s reliance on Althusser in making the claim that a flourishing philosophical discourse requires a flourishing scientific discourse is not adequately discussed by Dübgen and Skupien, even though it weakens Hountondji’s account, since he relies on Althusser without offering independent arguments. Fortunately, despite the fact Hountondji relies on Althusser and does not offer independent evidence to support his claim, one need not rely on Althusser’s rather dubious knowledge of the history of science and philosophy in order to provide evidential support for the claim that development of the empirical sciences provided philosophy with both its problematic (i.e. the questions that it raised) and the tools by means of which philosophers have attempted to answer those questions. For example, one can point to contemporary scholarship which emphasizes methodological approaches to the history of early modern European philosophy that recognize the importance of taking into account early modern science when attempting to understand early modern European philosophers (Foisneau 2011: 802; Friedman 2010: 504). Bringing Hountondji into conversation with contemporary historians and philosophers of science would have also strengthened the case for the contemporary relevance of Hountondji. Nevertheless, the aforementioned points should not be understood as criticisms of Dübgen and Skupien’s book. Rather they are examples of the stimulating questions that are raised by their book. Readers who are interested in African philosophy, the sociology of scientific knowledge, African Marxism and dependency theory will find much of interest in Paulin Hountondji.