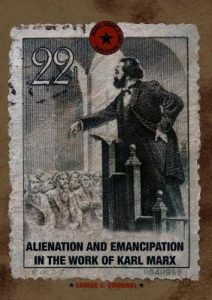 With such balanced prose and precise argumentation there are few words fit for purpose other than to declare that with Alienation and Emancipation in the Work of Karl Marx, George Comninel has produced a simply exquisite book. Without hyperbole, it ranks among some of the finest scholarship I have encountered in the past decade. While the manuscript appears effortless, Comninel admits that it is not. ‘It is always a challenge to write about any significant aspect of Marx’s work,’ he writes (xvi). This challenge arises not only because of Marx’s stature, many intellectual contributions, broad concrete areas of expertise and the like, but because there are so ‘many points of entry into his ideas – political, philosophical, historical, economic, sociological, and so on’ (xvi). But Comninel has more than risen to the task. Much like Marx’s lifelong project to appreciate the ‘historical dimension of unfreedom’ (23), Comninel is able to convey how these elements developed in time, while also generating a reading ‘freed from the dead weight of the past’ (313).

Framing his contribution to the study of Marx’s work, Comninel adheres to Neal Wood and Ellen Meiksins Wood’s Political Marxism, a view that puts texts and their authors into a historical context. Herein, comprehending the ‘issues of historical class analysis’ requires drawing upon a ‘social history of political theory’ (xv). This method seeks to engage the author as embedded in a particular ‘social, political, and economic context’ (xv). While there have been scuffles with this methodology, more generally this view has gained standing, especially so as Comninel treats Marx’s work to this method. For example, Comninel follows Ellen Meiksins Wood’s argument that it was through the critique of political economy that Marx conceptualised how historical development can be understood from the vantage of processes produced by social forms, and that a particular combination of these forms gives rise to capitalist development (17). Herein with capitalism marks ‘a terminal point to the development of class exploitation’ (281), it being the most intense form of class society due to the degree to which exploitation is otherwise disguised as freedom.

Each chapter is an illustration of Political Marxism in action. Starting with the understanding of the French Revolution and its aftermath, Comninel shows how Marx’s topics of concern change as his life progresses, as he encounters and learns more of this or that topic, all the while anchored by a project to understand the character of the unfreedom and class struggle in his lifetime. Accordingly, the book is somewhat chronological, following Marx’s biography, with early chapters focusing on the economic and philosophical manuscripts, the middle chapters on the Communist Manifesto, and later chapters on Capital and the International Working Men’s Association. The final chapter comments upon the task of critical social theory, where current practices thereof can be improved, refined and otherwise avoid bifurcations.

A considerable amount of argumentation traverses Alienation and Emancipation in the Work of Karl Marx. This argumentation covers not only Marx’s various disputes with others, but also deftly navigates the intra-mural debates in Marxist hermeneutics, while conveying how the core elements of Marx’s social project remain relevant for contemporary analysis and political action. Comninel accomplishes all of this with grace. A good example is in the early chapters which trace Marx’s encounter (and break) with the Left Hegelians where his views shift as his lived political experience with the Prussian state. The state’s censorship showed the limitations of doctrines born in the library. Similarly, the economic and philosophical manuscripts outline Marx’s lifelong project. They begin with the view that wages are the by-product class struggle, not the source, and that to see this requires superseding the hereunto existing analysis of political economy. The resultant critique is the attempt to comprehend the role of abstract labour in historical development while stimulatingly expanding the scope of how human emancipation could be considered. Accordingly, the political project goes beyond simply being satisfied with better wages (13). As Comninel demonstrates, Marx’s work starts where others stop.

Similar efforts can be seen on Comninel’s part, particularly as the chief argument of the book unfolds. Here it is argued that a ‘social history of political theory’ is the appropriate method to uncover the relation between the various configurations and intensities of social forms and the society that they produce. This can be best be understood as a ‘continuum’ rather than a sequential historical periodization; it is not appropriate to suggest there is ‘progress’ as changes in these social forms lead to differentiation. Comninel is stark here: ‘Nothing leads necessarily or teleologically towards the capitalist form of social property relations’ (24). Accordingly, it does not follow then that rigid ‘philosophical history’ is apt. Indeed, such an approach is ‘fundamentally and profoundly wrong’ (ibid). Comninel goes one step further, writing that ‘conventional Marxist accounts of history grounded upon it are at odds with both fact and Marx’s truly original ideas’ (ibid).

These remarks are framed as a moment of liberation for social theory, for if ‘capitalism was neither necessary nor inevitable’ (ibid), then its intensity and associated misery can be altered, its harms mitigated and its exploitation reduced. In viewing capitalism as contingent, Comninel seeks to return agency to the oppressed classes pursuing answers to social questions across the whole terrain of politics. Contingency is important to recognise, given the extent to which capitalism stimulatingly colonizes and naturalises. The claims of economists that take this for granted are nothing less than ‘absurd and ahistorical’ (ibid). Of course, to Comninel’s mind, communism does not provide a ‘philosophical guarantee of a future free from alienation and exploitation’ (25). But that should not prohibit efforts to pursue that goal. Such as task is possible because, as Marx saw so clearly, misery is the outcome of the social forms human produce. And these forms could be re-made. Achieving that task, Comninel argues that ‘we must take heart from Marx’s willingness to stray beyond the framework with which he began and learn from his ongoing efforts to advance historical understanding’ (3).

It is in the final chapter that sympathetic readers may find areas of dispute or departures of thought. Here Comninel addresses the need for Marxist social theorists to have a greater appreciation of history and historical materialism. ‘Most Marxists,’ Comninel writes, ‘have been almost exclusively concerned with the political and economic issues of capitalist society, and with the problem of socialist revolution. Very few have given serious consideration to the central importance of a truly historical conception of social development’ (282). He adds that ‘the predominant expressions of Marxist theory remain bound by concepts drawn from specifically capitalist society,’ which are then ‘anachronistically projected into the past, forming the basis for what is then construed to be a historical dimension of analysis’ (283). The exception to this practice, he states, are those that follow Political Marxism precepts. As a practical example may illustrate what Comninel means: ‘Nobles in ancien régime France did not irrationally “squander” fortunes on conspicuous displays at Court – they played to the expectations of a King who dispensed the munificence of enormous state revenue’ (283). Readers who are so inclined may wish to become interlocuters.

One cannot but get the impression that due to the positions Comninel has adopted, he has had as a small but valuable intellectual fellowship. For example, he describes how the intellectual response to the 1968 revolts was the mainstreaming of what came to be known in English universities as structuralist and post-structuralist analysis. These methodologies complicated the correspondence theory of truth upon which Marxism rests. The result was to put Marxists into the wilderness as class analysis fell out of favour. Some Marxists bunkered down into ahistorical orthodoxy, refusing to engage with new evidence or techniques. Others adapted and took the cultural turn but at the cost of de-centering class analysis. Yet either way, it left Comninel with few fellows who retained a core interest in the project of human emancipation from exploitation and a willingness to adapt it to the period in which they lived. But thankfully the there has been be a resurgence of interest in Marxism after 2008, and likely to be another now in the wake of the intensification of social inequality under the global coronavirus crisis. To that end, Comninel so clearly understands the Marxist project. It should hearten us that we can count him among our friends.