Marx & Philosophy Review of BooksReviews‘How We Get Free: Black Feminism and the Combahee River Collective’ by Keeanga-Yamahtta Taylor (ed) reviewed by Chris Gilligan 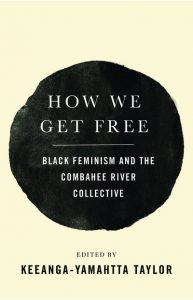 Keeanga-Yamahtta Taylor (ed)
How We Get Free: Black Feminism and the Combahee River Collective

How We Get Free was published to mark the fortieth anniversary of the influential Combahee River Collective (CRC) statement. The CRC were a group of Black socialist feminists who were engaged in Black, women, gay and socialist struggles in the US in the 1970s. The CRC statement made a case for emancipatory Black feminist theory and practice. The book contains the original 1977 statement, but the statement itself is a relatively small portion of the book. It is, however, the centre around which everything else in How We Get Free orbits.

The book is composed of an introduction by Keeanga-Yamahtta Taylor, the original CRC statement, three separate, one-to-one, interviews that Taylor conducted with key figures in the CRC (Demita Frazier and sisters Barbara and Beverley Smith), an interview with #BlackLivesMatter organiser, Alicia Garza, and a commentary by radical Black academic, Barbara Ransby.

Although the CRC statement is now more than 40 years old, the various contributors testify to its contemporary relevance in various ways. Taylor, in her introduction, makes the case for the importance of the CRC statement and its enduring influence: ‘it is difficult to quantify the enormity of the political contribution made by the women of the Combahee River Collective […] because so much of their analysis is taken for granted in feminist politics today’ (4).

Alicia Garza highlights the enduring relevance of the CRC statement when she recalls going to a meeting of a Black left coalition in 2007 and there were only a handful of women present in a meeting of about 150 people. After the first Black male speaker talked for about thirty minutes, Garza responded:

The CRC statement is widely considered to be the first place in which the term ‘identity politics’ was used. Taylor claims that, since then, the term ‘identity politics […] has been used, abused, and reconfigured into something foreign to its creators’ (8). The premise of the book appears to be that reflecting on the foundational moment of the term, in the context of today, will help to refresh the emancipatory impulse that lay within that foundational moment.

A recurring theme throughout How We Get Free is that identity politics, as conceived by the CRC, is not sectional or divisive. As its authors put it in the opening paragraph of the original CRC statement: ‘The most general statement of our politics at the present time would be that we are actively committed to struggling against racial, sexual, heterosexual and class oppression, and see as our particular task the development of integrated analysis and practice based up the fact that the major systems of oppression are interlocking’ (15).

Their opposition to these sectionalisms of the 1970s did not, however, mean that they were opposed to the left, Black liberation and feminist movements. The CRC emerged as a development of, and attempt to overcome, contradictions that were immanent within the movements of which they were part. Stokely Carmichael/Kwame Ture, for example, was one of the leading figures in the struggle for Black freedom. Yet, as Barbara Smith points out, ‘when asked what is the position of the Black woman in the Black struggle’, his response was ‘to be […] supine’ (i.e. to lie on their backs and be sexually receptive to Black men in the movement) (63). Carmichael/Ture’s view, shared by many men in the Black and socialist movements of the time, and still too many today, was that women’s role in the struggle for freedom was subordinate to the role of men. The members of the CRC were both part of the movements against oppression and critics of those movements. The claim, in the original CRC statement, that ‘[w]e struggle together with Black men against racism, while we also struggle with Black men about sexism’ (19), had its counterpart in the CRC’s engagements with feminism and socialism. CRC members were active in campaigns around abortion rights, domestic violence, sterilisation of women and in the anti-Vietnam war movement.

The particularity of the positions of CRC members – as Black, working-class, lesbians – meant that they were located at the intersection of multiple oppressions. As Taylor notes: ‘Black women’s social positions made them disproportionately susceptible to the ravages of capitalism, including poverty, illness, violence, sexual assault, and inadequate healthcare and housing, to name only the most obvious’ (8). Ironically, the particularity of the members of the CRC placed them in a position where they were more attuned to the universal. Their struggle was universalising, rather than sectional, because, in order to ‘get free’, they had to struggle against all the forms of oppression they experienced.

How We Get Free does a good job of highlighting the emancipatory impulse and coalition-building politics that were integral to the CRC statement. The book, however, has disappointingly little to say about the sectional forms of identity politics that are popular today.

Another disappointing aspect of How We Get Free is its superficial engagement with Marx. In her introduction Taylor says that the CRC ‘were not acting or writing against Marxism, but, in their own words, they looked to “extend” Marxist analysis to incorporate an understanding of the oppression of Black women’ (7). The passage from the CRC statement that she is referring to reads as follows: ‘Although we are in essential agreement with Marx’s theory as it applied to the very specific economic relations he analyzed, we know that his analysis must be extended further in order for us to understand our specific economic situation as Black women’ (20). Taylor does not interrogate what the CRC meant by ‘Marx’s theory as it applied to the very specific economic relations he analysed’. In her interviews with Frazier and the Smith sisters, she does not ask any questions about Marx, or Marxism. When they refer to Marx, which Marx were they referring to? The Marx who wrote Capital, the Communist Manifesto, the Critique of the Gotha Program or many other works? Or perhaps Marx as filtered through Engels, Lenin, Stalin or Mao? The answer is not clear. It is not clear in the text of the CRC statement, in Taylor’s introduction or in the interviews that Taylor conducted with the three authors of the statement. In the CRC statement, Marx is invoked in the manner of name-dropping. He is not treated as a philosopher-activist, whose rigorous method of critique informs the analysis of the CRC. But then, the CRC are not claiming to be Marxists. Taylor, on the other hand, was a leading member of the Trotskyist International Socialist Organization (ISO) when How We Get Free was put together. So, it is fair to ask why she uncritically draws attention to the claim that the CRC were extending Marxist analysis.

The CRC threw down a challenge to the Marxism of the 1970s: ‘We are not convinced, however, that a socialist revolution that is not also a feminist and antiracist revolution will guarantee our liberation’ (20). This insight, however, is not an extension of Marxist analysis but a point made by Marx himself. It is there, for example, in Capital, where Marx argues that ‘[l]abour cannot emancipate itself in the white skin where in the black it is branded’ (Marx 1996: 305). It is there in the Communist Manifesto, where Marx writes: ‘The bourgeois sees in his wife a mere instrument of production […] the abolition of the present system of production must bring with it the abolition of the community of women springing from that system, i.e., of prostitution both public and private’ (Marx and Engels 1976: 502). It is there in Marx’s activity in the International Workingmen’s Association where he worked tirelessly to secure solidarity with the Irish fighting for freedom from England and Abolitionists fighting for an end to slavery in the US..

This insight, as Taylor notes, was applied by Lenin when he ‘identified the “special oppression” of national minorities [and] call[ed] upon the Communist Party [of the US] in the 1920s to become more active in the struggles of Black people against racism’ (8). In the postwar period, this insight was applied and developed most consistently in the Marxist tradition by Raya Dunayevskaya and the News & Letters Committees. From the early 1950s they identified rank-and-file workers, African-Americans, women and youth as four key sections of society who had an interest in, and were actively struggling to, overthrow capitalism and create a new society based on fully human grounds (see e.g.: Dunayevskaya 1973). It is an insight that has been grasped intuitively by many radical activists today. But it is an insight that needs to be deepened and extended in these times of populist chauvinism and sectionalist identity politics.