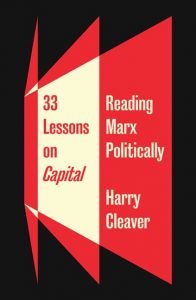 Robert Ovetz, Ph.D. studied with Harry Cleaver for nearly a decade at UT-Austin. He is a precarious …

This review is my effort to return the gift Cleaver bestowed onto me, a gift he shared with thousands of other students in his decades of teaching Marx. His gift is repeated here in 33 Lessons on Capital almost as I received it so many years ago during the decade I spent studying with him. Studying Marx with Cleaver was not about learning an ideology but rather how to master an analytical tool to read, reread, invert, and go to battle with capitalism. This tool has a shelf life which I could only hope is short lived. Cleaver’s autonomist marxism, constructed as it were after Marx’s analysis of capitalism, is designed to become obsolete once we get past capitalism. If marxism is a tool for analyzing and fighting capitalism, 33 Lessons on Capital is an essential handbook.

At 519 pages, 33 Lessons on Capital appears daunting. But once you settle in and get through the most difficult section on Part One of Capital, which is actually the second part, you will be generously rewarded. Cleaver was brought to UT-Austin in response to demands by students that the Economics Department hire someone to teach Marx. He answered the students’ demands with dedication, teaching Marx for decades to conservatives, liberals, capitalists, socialists, cynics, and identity politics radicals alike. Cleaver placed himself at the disposal of countless student movements and our own graduate student unionization effort, deftly refining his pedagogy in both the classroom and theory on the campus halls. 33 Lessons on Capital is the product of his lifelong passion and commitment, organized precisely to not merely make Marx’s Capital eminently understandable but accessible and—most importantly—useable in the class struggle.

As the title makes clear, volume I of Capital has 33 chapters and eight parts. Cleaver takes each part and chapter in turn with a critical twist—he begins most importantly with the end, Part Eight, “So-called Primitive Accumulation.” This unorthodox logical organization works. Each part begins with a brief overview of each chapter and their key concepts along with an “Outline of Marx’s Analysis”. Cleaver then provides his “Commentary” on Marx’s key concepts drawing from a broad swath of Marx’s gigantic universe of writings.

Cleaver focuses on three critical themes running through all of the commentaries. The first two are why capitalism is a system of control based on the endless imposition of work and the continued relevance of Marx to the exploitation of both waged and unwaged workers, such as “housewives” and students, today. The last theme is why the class struggle is fundamentally a struggle against work in which workers use both unions and self-organization to struggle in such a way that it has forced concessions from capitalism, triggered crises, and potentially ruptured its domination of all life with work. These struggles, Cleaver reminds us, can be understood as the dynamic interplay between capital’s plan, or the technical composition of capital, and the working class struggle, or working class recomposition. To the degree that capital prevails, a class composition is imposed restoring production and control. Ultimately, it is possible that workers prevail not in merely recomposing their own power but entirely rupturing and transcending capitalism in order to realize the infinite possibilities of existence (125).

Reminiscent of the same way Cleaver taught Marx to us decades ago, he starts with Part Eight, “So-Called Primitive Accumulation,” the place where Marx ends Volume I. The reason is solid: Capitalism begins with the endless accumulation of a class of workers through the process of the enclosures at home and abroad in the form of internal and external colonialism. This dispossession from the means of subsistence serves as the driving force for the formation of a class of workers with nothing to sell but their own labor power. Cleaver upends Marx’s logical progression through Capital to make a point: capitalism is not merely a system of exploitation but a system that survives and grows through the endless imposition of work. To understand Marx’s insight it’s critical to begin at the violent inception of capitalism: colonialism, the enclosure of the commons, and the creation of a working class. In order to break up the feudal domination of labor tied to the landlord, enclosures in England ripped the peasants from the land, their means of subsistence, and created a class of workers with nothing to sell but their labor.

The enclosure is the “original sin” of capitalism, creating by deadly force not merely a class of waged but also unwaged workers. As Cleaver (55) argues, “Although primitive accumulation has often been defined as the creation of a waged proletariat, we have seen how that very process also involved the creation of the unwaged, from vagabonds through slaves to housewives and children”. Herein lies the crux of Cleaver’s reading of Marx. The circuits of production, wages, and money hide the golden elixir of capital: unwaged labor. To illustrate how Marx laid the theoretical foundation for understanding the continuing relevance of unwaged labor as the source of all surplus value and profit, Cleaver finds it imperative to begin with primitive accumulation, the process which highlighted, according to Marx (1976 [1867], 916), how “force is the midwife of every old society which is pregnant with a new one”.

Before he proceeds to highlight the central role of unwaged labor to capital and the central role of unwaged workers in class struggle, Cleaver first turns to his signature theoretical argument: capitalism is a system of endless imposition of work. This long-overlooked reading of Capital as analysis of a system of domination based on the endless imposition of work and the colonialization and subordination of all life to work is at the heart of autonomist marxist (mistakenly referred to as “workerist”) analysis. Marx (1976 [1867], 717-18) himself makes this point most vividly in a long ignored passage in which he describes the “the individual consumption of the worker, whether it occurs inside or outside the workshop, inside or outside the labour process, remains an aspect of the production and reproduction of capital”.

Continuing his life’s work to demystify Marx’s “labor theory of value,” Cleaver (174) argues that “value” is not a thing but a relationship: “Value is work-for-capital as social control”. The endless imposition of endless work is the fundamental relationship of capitalism. The more work that can be imposed, the more value that is created. In other words, the value of work to capital is that it maintains control by forcing us to work (207). Refuse work and no value is created, and the system of control breaks down. Elsewhere, Cleaver observes the possibility of rupturing the role of work as value, as control.

As Cleaver (717-18) reads Marx, the consumption of the workers’ labor power in the production of commodities is only made possible by the hidden unwaged labor. The production of labor power available to capital occurs in the home and the classroom in the form of both repairing and disciplining new submission to endless work. Cleaver’s analysis is a distinct departure from the long denigration of reproductive labor as somehow “outside” capitalist relations or subordinated to the struggles of waged workers. Rather, Cleaver (196) argues, they are the key to the struggle to transcend capital.

Cleaver’s objective in expanding Marx’s analysis of capitalism to the unwaged is not merely an academic exercise, but rather to provide a fuller understanding of what he called the “class composition,” or the current relations of production, the organization of work, and the make-up of the working class, both waged and unwaged. Class composition is the outcome of capital’s response to previous class struggle, reorganizing production, increasing the organic composition of capital by introducing new technology, reducing necessary labor either by increasing absolute (lengthening work time) or relative (increasing productivity by raising the intensity of work) surplus value, rationalizing work, and deskilling labor. All of this is intended to reduce its reliance on labor or shifting its exploitation somewhere else in the global supply chain where workers are more pliable, unorganized, and weak. “Such reorganization of work has not only increased productivity but has also constituted an ever more prevalent strategy for dealing with workers.” (italics in original, 276). It can be understood as capital’s strategy for purging itself of a reliance on unruly workers.

For Cleaver, this technical composition is ever changing in response to workers’ struggles against work, domination, and exploitation. The fatal risk to capital emerges from attempting to do away with unruly workers through automation and other technology that Cleaver (450) and the other members of the short-lived journal of the same name coined “zerowork” (see http://www.zerowork.org/):

a rising organic composition of capital…is the dangerous consequence of this capitalist strategy: a declining need for labor to produce wealth, a decline that undercuts capital’s inability to impose work and can inspire the rejection of any need for capitalists as managers of production.

While the tactics are ever changing, capital’s strategy to impose a new technical composition and restore control remains the same. Today we see the central role of AI to incessantly gather data that informs new tactics for maintaining control over labor. Among these are app or platform-based labor management strategies that rely on the incessant collection of algorithmic data by tracking worker productivity in real time. The equivalent in education is web-based learning management systems and remote conferencing apps in on-line education that have exploded in use during the COVID-19 pandemic. Providing management with the capacity for ubiquitous data collection and tracking, this threatens to become a genie that will be very difficult to put back in the bottle once the crisis passes.

Rising productivity, Cleaver reminds us, was capital’s response to successful wage and hour struggles by better organized workers. Post-depression wage-productivity deals exchanged higher wages and shorter work days/weeks/life for control over the intensity and organization of work. This so-called Fordist deal, provided capital breathing room in order to shift from absolute surplus value to relative surplus value production. New tactics and strategies were deployed elsewhere in the global factory to develop a new technical composition, eventually returning to reimpose the new post-Fordist relations of production on these previously successful workers.

Cleaver reframes capital’s search for a new technical composition as part of the ebb and flow of the class struggle in which understanding the current class composition and how we arrived at it informs workers’ new tactics, strategies, and objectives for recomposing working class power in order to relaunch and circulate the struggle on a new terrain. As class struggle surges during the pandemic 33 Lessons on Capital has arrived right on time.