Marx & Philosophy Review of BooksReviews‘Planetary Mine: Territories of Extraction Under Late Capitalism’ by Martín Arboleda reviewed by Steve Knight 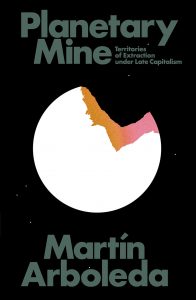 Martín Arboleda
Planetary Mine: Territories of Extraction Under Late Capitalism

Yanacocha, a complex of four open-pit mines and four processing facilities stretching over more than 500 square miles in the Northern highlands of Peru, is Latin America’s largest gold mine and the second-largest in the world.  Operating since 1993 as a joint venture of U.S.-based Newmont Mining, a Peruvian mining firm and the International Finance Corporation, Yanacocha has produced millions of ounces of gold, silver, and copper for international export.  At the same time, Yanacocha has brought forth a nearly endless stream of lawsuits, blockades and other protests by indigenous groups over the mine’s pollution of their water supply with mercury and cyanide, both by-products of the mining process.

Mega-mining operations like Yanacocha – combining the extraction of vast wealth with negative externalities for surrounding communities – have become increasingly common throughout Latin America over the past forty years, following on the post-Allende “Chicago Boys” wave of neoliberal economics that opened formerly state-owned resources to widespread multinational investment. In Planetary Mine, Chile-based author Martin Arboleda makes a compelling case that mines have been transformed into the loci of simultaneous, interconnected revolutions in relations of technology, labor, and financialization.  In his introduction, Arboleda defines the planetary mine as a new, twenty-first century “geography of extraction” that merges two world-historical shifts: an industrialization no longer circumscribed by the West, and a leap forward in the robotization and computerization of the labor process.

It should be stated near the outset that “Planetary Mine” succeeds on two levels simultaneously, for two different cohorts of potential readers.  First, it is an illuminating description of how over the past generation Latin American extractive industries have integrated with the emerging “tiger economies” of East Asia, China in particular; indeed, trade between Latin American and Asian states is rapidly replacing trans-Atlantic commerce as the world’s preeminent trading relationship. Second, Planetary Mine draws upon the insights of numerous Marxian theorists to show that resource extraction in Latin America is best understood as a flow of worldwide value creation that depends, in the author’s words, on “networks of relations” (22) among people and communities to create spaces of extraction.  At one point Arboleda (123) quotes Marx from the Grundrisse: “The tendency to create the world market is inherent to the concept of capital itself”; this is an apropos choice of quotation, the narrative of Planetary Mine illustrates this statement.

Arboleda makes an especially adept use of one Marxian thinker, Henri Lefebvre, who in works such as The Urban Revolution and Critique of Everyday Life developed the notion of “totality” as a set of dialectically interconnected levels of social practice: global, urban, and local.  While the author draws upon Lefebvre’s trope of totality most explicitly in Chapter Six, “Debts of Extraction”, to show how a globalized financial system creates financialized “geographies of extraction” that subsume both urban and local communities in the circuit of capital, “totality” is actually a concept that suffuses every section of “Planetary Mine.” The book’s chapter topics – Empire, Labor, Circulation, Expertise, Money, and Struggle – are meant to be understood as co-equal constituents of one totality. As the author writes to underscore the importance of totality, “Marx intended the idea of the world market to express the primacy of the concrete corporeality of the sum total of the vast multitude of labors living under the geographies of capitalist society, before it assumes distorted forms in international political relations and inter-capitalist competition” (52).

Key to understanding this “vast multitude of labors” powering the worldwide network of the planetary mine is the theory of “global depeasantization” propounded by Farshad Araghi and other Marxian theorists.  Arboleda shows that depeasantization has operated with increasing speed since the 1990s at both ends of the resource extraction value chain: Latin American peasants, along with millions of their Chinese counterparts, have been systematically separated from subsistence-based, agrarian-oriented communities and fully proletarianized. The author also draws upon the notion of the “collective laborer” described by Marx in Volume 1 of Capital (with considerable assistance here from Moishe Postone’s landmark study Time, Labor, and Social Domination) to suggest that the twenty-first century may produce the world’s first truly global proletariat, where a combination of cross-border migration and racialization of the workforce make available an always-ready reserve army of industrial labor.

No discussion of the modern mining industry would be complete without mentioning the huge leap forward in recent decades in extractive technologies: robotized trucks, GIS systems to locate new mineral sources, engineered microorganisms to break the resistance of recalcitrant ores, computerized port facilities, massive container ships, to name just a few.  Arboleda skillfully places these technological advances in the context of a “fourth machine age”, an extension of Ernest Mandel’s three previous machine-driven ages of production from his study Late Capitalism. He points out that these technological changes have increased the material footprint of mineral extraction, according to one geophysicist, by a factor of around 1,000, with a concomitant increase in ecosystem degradation near mining sites (49). In addition, however, the increased organic composition of capital in the mining industry, with technology often reducing the size of the workforce while at the same time placing downward pressure on value creation for the owners of capital, has created an opening for revolutionary praxis among mining’s proletariat. “Alongside job destruction and instability,” Arboleda (234) writes, “the computerization and mechanization of resource extraction has also underpinned renewed processes of knowledge production in formal settings as well as in the course of workers’ practical interaction with technological infrastructures.” Communities of resource extraction workers throughout Latin America have acquired cellular phones, computers and internet access as they have been drawn into the proletariat, all of which have increased their ability to organize collectively.

This leads into the book’s penultimate chapter, “Struggle: Plebeian Consciousness and the Universal Ayllu”, where Arboleda presents numerous possibilities for workers’ revolutionary action at all stages of the planetary mine’s value chain.  The author wisely foregrounds this discussion with a consideration of Marx’s late writings, where he escaped the narrow Eurocentrism of his earlier work and began delineating revolutionary potentialities in non-Western societies.  Latin American Marxism, Arboleda notes, offers one excellent opportunity to rethink the global working class outside of a Eurocentric bias. The former Bolivian vice-president Garcia Linera, for example, envisions the ayllu (a network of Andean indigenous communal associations) as a potential vector for ethnic- and class-based opposition to the extractive industry’s dominance. Moreover, the simultaneous depeasantization of both Latin American and East Asian workers mentioned earlier is another force for proletarian revolt, as conditions for workers’ dissatisfaction are strikingly similar at both ends of the commodity cycle: dispossession of peasants’ land to create industrialized agriculture; environmental degradation from changes in land use caused by infrastructural modernization; corruption of local government officials; and – perhaps most important – a massive increase in the use of subcontracted, contingent labor. “More than being merely oppositional,” Arboleda (222) writes, “these struggles are concerned with inventing new territorial configurations in which value relations are overthrown and replaced by renewed modes of sociality”, a sociality potentially rooted in the ethos of Linera’s “universal ayllu.”

Arboleda ends the narrative of “Planetary Mine” on an optimistic note, in an epilogue that devotes much of its space to how some resource extraction workers are bridging the divide between intellectual and manual labor (“science” and “life,” in Marx’s terms) that is endemic to capitalism.  The key to bringing together intellectual workers with their indigenous and campesino comrades, the author maintains, is endowing intellectual workers with class consciousness, a sense that their ideas should be grounded in the material struggles of those who supply living labor.  Some Latin American scientists, for example, have trained indigenous activists in the use of drones to monitor extractive firms’ destruction of ecosystems: surely an example of turning the tables on surveillance capitalism!  It is this creative interplay between indigenous knowledge, technology, and class consciousness that perhaps offers the best chance of effective resistance for all types of workers to the totalizing value relations of resource extraction.

Planetary Mine should be considered essential reading for anyone interested either in Latin America’s signal contributions to Marxian thinking, or in understanding commodity extraction and export from a historical materialist point of view.  The author avoids the trap of methodological nationalism that limits many studies of extraction, offering instead a lively account of the globalized, sociometabolic processes underlying the extractive industry’s production and reproduction. As Arboleda (6) states in his introduction, “the manifold determinations that produce landscapes of extraction in historically and geographically specific ways necessitates a dialectical theory of praxis, one that sets out from the material conditions in which life itself is produced and reproduced”. Planetary Mine succeeds admirably in showing this dialectical process at work.