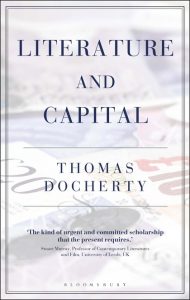 Dr Chrys Papaioannou is a London-based critical theorist and activist, working at the intersection …

An impassioned critique of financial capitalism and its relationship to the institution of literature, Thomas Docherty’s Literature and Capital offers a panoramic view of the historical development of the disciplinary field of ‘English’, while also articulating an unswerving indignation about the rise of managerialism in UK universities and its impact on the discipline’s intellectual and ethico-political integrity. Despite its anti-capitalist and anti-neoliberal convictions, Literature and Capital is perhaps best understood as a left-liberal political intervention that returns to familiar arguments about freedom of speech, identity politics, the privatisation of the university and the role of English and the humanities in countering populism and authoritarianism. In this respect, and in the context of the author’s own body of work, it anticipates arguments that are made in his subsequent book-length publication Political English: Language and the Decay of Politics (2019) and continues his own, widely-circulated within UK academia critique of the neoliberal university, published in outlets such as Times Higher and the monograph For The University: Democracy and the Future of the Institution (2011), written in the aftermath of the UK university student movement of 2010.

Docherty’s wide-ranging, indignant account regrettably falls short of offering new scholarly insights in the field of literary studies, be it Marxist or otherwise. Literature and Capital appears to be characterised by an idealist fear of economisation and of literature’s consequent ‘lapse’ into monetisation, rather than by a materialist engagement with literature’s political economy; as such, it is of somewhat limited use to scholars of Marxist philosophy, or to readers seeking a sociological treatment of literature and its institutions. (It is worth noting, for instance, that while Docherty makes extensive use of the term ‘cultural capital’, Pierre Bourdieu is only fleetingly cited once and methodologically entirely circumvented.) According to Docherty, the book aims ‘to show the fundamental interplay in which the forms of capital shape the forms and functions of literature and of literary study’ (10). Yet the linear historical trajectory that the author traces from the middle ages to the present makes no attempt at sketching a dialectical history of literature’s relationship to capital. Instead, ‘capital’, as well as ‘letters’ and indeed many other figures of speech in this monograph, are engaged with textually and rhetorically. Docherty’s historical narrative remains therefore ‘literary’, rather than historicist or historical-materialist, insofar as it relies on a combination of anecdotal journalistic evidence, overly selective secondary sources and, for the most part, close readings from an Anglophone (occasionally ‘global’) literary canon. While such breadth in literary selection no doubt reveals Docherty’s mastery over this canonical corpus, the associational logic that underpins his mode of exposition is far more suitable to focussed treatments of single texts (as is successfully executed in the interpretation of Glaswegian poet Edwin Morgan’s ‘Sick Man’ and ‘The Loch Ness Monster’s Song’ in the book’s final chapter, ‘Radical Geography’), than to far-reaching, trans-historical arguments that call for analytical frameworks mediating the literary with the socio-economic. Briefly put, remaining within what can be identified as a reflectionist analytical paradigm, Docherty asks his readers to understand the socio-economic through the literary, rather than offer a historical examination of how the ‘superstructure’ mediates its ‘base’.

Considered outside strict Marxist parameters, Literature and Capital manifests other, far from trivial, shortcomings. These shortcomings can be summarised under two broader issues: a.) geopolitics and national culture, itself an explicit concern in the monograph, and b.) subject position, both with respect to the author’s own positionality when addressing his readers, and with respect to the question of neoliberal subjectivation and the ‘privatised individual’. Geopolitics (a term not used by Docherty himself, opting instead for the more accessible term ‘geography’) emerges in the guise of land, namely, land ownership and private property, in a consideration of global financial capital, urban centres (or ‘capitals’, as the predictable wordplay would have it) and the housing market. This discussion of land ownership is central to Docherty’s critique of the moral bankruptcy of the contemporary university, and to his wider argument that a political and moral economy of feudalism continues well into our own late capitalist present (e.g. 208, 214-15).

Geopolitical concerns also emerge in the author’s exploration of ‘Englishness’, sketched in rather dubious psychologised portraits of ‘the English’ and their affective traits, once again explored anecdotally and through character analysis from selected novels (e.g. 58-62, 79). One needn’t be too attuned to contemporary scholarly debates in world literature to notice that Docherty uses the terms ‘literature’ and ‘English literature’ almost interchangeably, and without once justifying this conflation. Docherty is explicit in his intent to write against parochial Englishness – the spectre of Brexit no doubt haunts this book’s anger and self-hatred towards a nation-state in ruins (e.g. 246, n. 5; 246, n. 10; 248, n. 24) – yet the fact that literary texts are liberally sampled from an imperial English canon that has incorporated South African, Indian, Scottish and Irish authors, and can gesture towards Balzac and Goethe whenever it so wishes, unfortunately betrays the author’s own unacknowledged Anglocentrism, both in matters of politics and of the academy. Docherty is certainly aware of scholarly debates within ‘Comp Lit’, whether this is expressed in a snide remark towards Franco Moretti’s approach and ‘big data’ (202) or in more generous engagements with the work of his colleagues at Warwick (96-7, 230). Yet since Docherty is not a comparatist himself, the monograph does rest on the presumption that its reader is a student of English literature at a UK university, whereby the study of literature qua literature equates to the study of English, and no consideration is at all given to the role of other modern or classical languages in the institutionalisation of the literary (whether in the UK or elsewhere). Lest I be misunderstood in my criticism here, it is not the author’s focus on English literature that is problematic, but the unexamined, universalising logic underpinning this focus.

If Docherty’s geographical vantage point is one that looks out from the British Isles on to the world, his authorial vantage point is one that looks out from the professorial lectern on to a lecture theatre populated with undergraduate students. It is to the author’s credit that Literature and Capital is written in a clear, accessible language that avoids academic jargon, and the book’s overall scope and aims do render this publication more suitable as a textbook companion for an undergraduate survey course than a research monograph. Docherty presupposes little to no familiarity with the foundational figures his study is intellectually indebted to – most crucially, Raymond Williams, Matthew Arnold, George Orwell, Jürgen Habermas and Hannah Arendt – and is generous in guiding the novice reader along. Yet, clarity of language is not always matched by clarity of argument, partly because of the author’s tendency to graze at a text or historical account and then swiftly move on, partly because his interest lies less in offering summary introductions, and more in tactically deploying aspects that advance his own argument.

Perhaps one of the most objectionable instances of such tactical deployment, and one that brings us to the second issue of neoliberal subjectivation, is Docherty’s treatment of identity politics. Rather than wage the now-standard materialist critique against ‘cultural’ determinations (a line of critique which itself has been formidably rebutted since Judith Butler’s 1997 seminal essay ‘Merely Cultural’), the author curiously takes issue with the feminist slogan ‘the personal is political’ (177, 187-188, 195). Docherty includes a disclaimer that distinguishes between the slogan’s originally radical roots and what he considers to be its current appropriations (258 n.3). Nonetheless, he brazenly suggests that the slogan has been complicit in a neoliberal logic of the privatisation of the political and is in accord with Thatcherite principles such as ‘there is no such thing as society’ (195). In the opening paragraphs of Literature and Capital, Docherty acknowledges that within English, ‘we have had to redress the wrongs that this specific inflection of institutionalized Literature (“Eng Lit”) has done to women, people of oppressed races, those with sexualities that have differed from a supposed norm of heterosexuality, those from nations and cultures that have stepped out from colonial and imperial subjection and so on’ (2). Indeed, such wrongs have been redressed and continue to be redressed through critical methodologies that are not afraid of mediating the political through the personal, and do not mistake considerations of the racialised, gendered dimensions of subjectivation as a retreat to the private realm. When such a careless critique of identity politics is accompanied by a deep misunderstanding of the legitimacy of calls for ‘safe spaces’ within the university (254-255, n. 41), and by a lack of self-reflexivity on one’s own subject position as a reader of literature, then this reader for one cannot help but wonder how the current white-supremacist authoritarian capitalist hegemony which Docherty evidently opposes is to be forcibly countered.

Orwell aids Docherty in waging a language-war against Prevent and against the institutionalised discourses of the neo-feudalist corporate university, coining this instance of Newspeak ‘Managerian’ (144-151). For Docherty, the language and politics of Managerian, and the commercialised university whose business interests go hand-in-hand with its authoritarian silencing of democratic debate, can be remedied by a return to the language of the literary, exemplified in Edwin Morgan’s modernist-inspired poetic experimentations. These experimentations, like the work of Joyce and Heaney, suggests Docherty, offer a mode of resistance against nationalist claims to land, uncoupling language from national identity and territory from property relations (222). What Docherty calls ‘radical geography’, advocating earth over land, is therefore achieved through ‘a literary practice and activity that takes its task to be the discovery of language itself’ (233). Docherty’s concluding paragraphs may draw on Benjamin’s famous remarks on fascism and the aestheticization of politics, and the document of civilization being at once a document of barbarism (150), but the author’s investment in preserving the autonomy of the literary is ultimately coloured by the Habermasian view that such autonomy produces, and is produced by, a democratic public sphere premised on reason and freedom of speech. Literature and Capital may rail against the marketplace of ideas and the marketisation of education, but ultimately forecloses any possibility of imagining a political economy of the literary that moves beyond a trusting belief in preserving the values of liberal democracy.