Marx & Philosophy Review of BooksReviews‘Gadget Consciousness: Collective Thought, Will and Action in the Age of Social Media’ by Joss Hands reviewed by Jamie Ranger 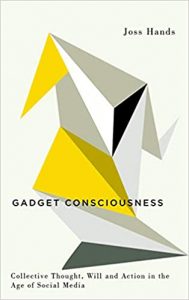 Joss Hands
Gadget Consciousness: Collective Thought, Will and Action in the Age of Social Media

Jamie Ranger is a DPhil candidate at St. Hugh’s College, University of Oxford. His thesis …

Gadget Consciousness is a book that begins with a scene of Steve Jobs announcing the iPhone and ends with a call for ‘Gadget Communism’: it is intellectually curious, theoretically robust, persuasively argued and unashamedly polemical. The untethering of our technological innovations from the capitalist mode of production may be one of the most important global political projects of the twenty-first century, and Hands takes us on a journey through the interdisciplinary literature that would corroborate such a proposition.

After an overview introduction, the first chapter, ‘The Question Concerning Gadgets’, focuses on the ways in which gadgets can be defined and how we ought to critically approach them as a category of object. Hands invites the reader to begin with the loose premise that gadgets are ‘useful things with a purpose’ (10) and throughout the chapter, via Heidegger’s question ‘what is a thing’ through contemporary philosophy to Albert Borgmann’s concepts of ‘focal practices’, concludes with the idea that to better understand our relationship to gadgets, we require ‘both an understanding and a contestation of the context in which the majority of actually existing gadgets come into being and are used- namely, capitalism’ (32).

The chapter ‘Gadget Materialism’ explores the material conditions that shape both the potential of gadgets as well as the way in which their capacities are limited by the economic frameworks in which they are incorporated. It begins with the techno-capitalist model, defined by Luis Suarez-Villa as a form of capitalism ‘that is heavily grounded on corporate power and its exploitation of technological creativity’ (33). The chapter overviews contemporary Marxist scholarship, disavowing both technological determinism and bleak pessimism to offer a critical-theoretical alternative that responds ‘to alienation by recourse to the ideal of recognition and the commitment to care’, to move from ‘control to escape’ and ‘break out from the recursive circuits of drive with the intensive realisation of reflexivity and collectivity’ by ‘recovering the idea of intention’ (56). To do so, we must investigate the relationship between intention and gadgets in terms of human consciousness.

‘Gadget Brain’ is a chapter that elaborates on this notion, ‘making an opening case for extending the idea of consciousness to include our gadgets and argue that this combination allows for a shared consciousness with elements of collective will and action’ (59). Warming us to philosophical notions beyond individual minds via Hegel, we are provided with a materialist account of shared consciousness based on empirical observations in cognitive science: if we understand consciousness as an emergent property rather than an aspect of the brain as an object, we may open ourselves up to ideas of consciousness defined as facilities for assessing, disseminating and exchanging information, and for exercising global coordination and control’ (70). Following the ‘strange loops’ posited by Hofstadter, we arrive at the literature of externalism, arguing the case for an extended and situated consciousness, and neuroplasticity, that may even push us as far as thinking about the brain as a gadget.

In ‘Gadget Consciousness’, Hands confronts the three dominant accounts of augmented consciousness: the singularity, collective intelligence and the multitude. The singularity, whilst fruitful for science-fiction, betrays an overt focus on consciousness as entirely mind, separate from the mechanics of the body; collective intelligence is criticised for reducing intellect to one unified agent, ‘rather than retaining the sense of being in dialectical tension with the individual’ (91); finally, the multitude, coined by Baruch Spinoza and revitalised by the Italian autonomist tradition, whilst having a more explicitly political focus, makes an ontological error in assuming that decision-making at the macro level will work as it does at the micro level – ‘to put it bluntly, people aren’t neurons in a brain’ (94). Instead, Hands invites us to consider the ways in which gadgets ‘enable a harmonisation of the polyphony of voices and as such there is resonance between them’ (95). Following an examination of what Bernard Stiegler refers to as the process of the proletarianisation of knowledge (by our contemporary digital technologies), we may observe that ‘distraction and attention are two aspects of the same process’ (102), and yet whilst these processes of accelerated information circulation exist, there remains the possibility of disavowing the relationship between volition and capital, and instead build ‘a new political economy of commoning’ (103), which Hands argues can be thought through and articulated with an account of gadget consciousness.

The subsequent chapter on ‘Gadget Action’ advances the notion that gadgets ‘host our brains, bodies and spaces, and these then feed back into each other to create collective thinking and action’ (116) and presents the ways in which they reinforce resonance between peoples in a variety of case studies. After Occupy, Tahrir Square and the London student protests, Hands touches on the worrying emergence of the alt-right, a toxic mixture of neo-Nazi discussion points aesthetically sanitized by anti-progressive forces costumed as ‘fellow’ gamers, recovering the origins of the word ‘idiot’ as ‘a private, dislocated, self-serving subject’ (123). Countering cyber-utopian accounts that espouse the collective wisdom found on the internet, we instead find examples of people believing they have found authentic community when they are in fact in a space of myopic congregation, and as such, the most ersatz, dangerous and exclusionary politics can disguise itself as universally shared secret truths, whilst ostensibly being an act of collective conspiratorial self-delusion. As Hands puts it, ‘such gadget consciousness is false as it proclaims in that it proclaims a defence of an imaginary individual freedom that is being curtailed, but in reality is a reactionary defence of the privileges of the already powerful’ (135). We can agree with the analysis here but one wonders whether there is sufficient difference between saying ‘false gadget consciousness’ and ‘false consciousness found on the internet’ and question the value of advocating the former conceptual framework if it requires more robust philosophical commitments.

The final chapter, ‘Gadget Futures’, reaffirms the possibility of a ‘gadget communism’, invoking a radical political imagination against the pessimism of certain contemporary scholarship. Hands leans heavily on Badiou’s communist hypothesis and envisions a future politics that embraces gadget consciousness as a means of sketching democratic alternatives unencumbered by the conceptual and ideological baggage of individualistic accounts of neoliberal subjectivity. As capital becomes increasingly reliant on speculating on Silicon Valley unicorns (companies projected to have billion-dollar valuations, often premised on their monopolizing potential), and our everyday lives increasingly reliant on handheld devices with internet access for both work and leisure time management and communication, there is little doubt that the ubiquity of digital technology will play a substantial role in any prospective political alternatives.

In terms of political strategy, we can be sympathetic, intrigued but nevertheless skeptical. We are certainly in unprecedented times of capitalist realism and low levels of class consciousness. Yet one is not left entirely convinced by the notion that we cannot step outside of ourselves and imagine a new form of politics without ‘gadget consciousness’. Furthermore, the view ‘of consciousness as a form of thinking together that is augmented and extended by gadgets’ (87) appears at least intuitively, to be philosophically superfluous. If communists of the past did not have to conceive of themselves in an equivalent way with their technologies, why ought the communists of the present? Is gadget consciousness a means of pursuing the best political strategy, or is it a counter-hegemonic necessity because of our political circumstances? This reviewer genuinely anticipates reading Hands’ follow-up work, especially considering the explosion of internet mass communication replacing face-to-face formalities within institutions as a result of Covid-19.

An aesthetic criticism of Gadget Consciousness is that breadth may have been favoured over depth: we often flit between different philosophers arguing about similar phenomena with similar concepts, but given our constant movement between quotations from the literature, on rare occasions the book often appears to be arbitrarily jumping between them rather than building a case: the early chapters focus on Heidegger, and then Borgmann (who was himself a Heidegger scholar), so there is a clear pathway from conceptual origins to contemporary application. But at other times, there are philosophers that are quoted in succession that aren’t put into conversation with each other so much as lending credibility (i.e. people are talking about this, so it is therefore plausible). At its best, the book resembles a research network, with interconnected insights ranging from the externalist theory of mind to Badiou’s observations on online dating, but sometimes it feels like you are reading an extensive literature review.

Overall, Gadget Consciousness is a treasure trove of ideas, finding interdisciplinary linkages between debates, chaining concepts together to reach novel conclusions, and making an impassioned case for thinking differently about technology, politics and ourselves. Whilst the reader might be occasionally perturbed by its tendency to flip between theorists, and grasp onto ideas for what can be considered an insufficient amount of space before moving the conversation along, ultimately, any book that engages the reader from start to finish, and immediately makes you want to read more from the author, and the subject discussed, must be considered a triumph.