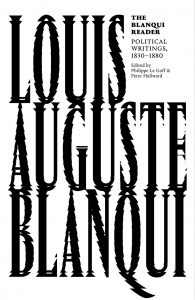 Blanquism joins terms like ‘social chauvinist’, ‘opportunist’ and ‘ultra-left’ as a sort of Marxist swear word to throw at one’s rivals. Lenin was frequently accused of being a Blanquist by his Menshevik rivals as well as in an early exchange with Rosa Luxemburg. As one of the editors of the collection points out, Marxists ‘have rarely deviated from Engels’ late critique of Blanqui’s legacy’ (xxxiv) in The Programme of the Blanquist Fugitives of the Paris Commune, in which Blanqui is portrayed as being a ‘man of action’ that believed an elite fighting force could spark a revolution off by attacking at the right moment. What would follow would be a dictatorship of this elite group on behalf of the proletariat. The Blanqui Reader seeks to rescue Blanqui, once synonymous with communism, from casual dismissal, pointing to the lessons that his life and work hold for today.

Hallward describes Blanqui as developing no ‘systematic social theory’ (xvii), nor being particularly effective as a strategic thinker. Yet Hallward outlines four aspects of Blanqui’s life and work that radicals can learn from today. Blanqui rejected abstract theorising for its own sake; the time for ‘words without deeds’ was over. Blanqui believed in education as an essential aspect of the establishment of communism – nothing teaches us more than participation in social upheaval. As Blanqui mockingly states ‘Communism and Proudhonism argue bitterly, on the bank of a river, as to whether on the other side there is a field of corn or a field of wheat’, ‘let us cross it first! We shall we when we get there!’ (166).

For Hallward, Blanqui understood the role force plays in social change; the oppressed and opTony Benn’s celebrated statement that ‘there is no final victory or final defeat, there is just the same battle. To be fought over and over again’ – or more classically Bernstein’s comment that the ‘movement is everything’ – are each, it can be said, reformist ways(xx) to the enemy, echoing St. Just’s notion that half-measures and failure lead to ‘rivers of blood’ (155) of the oppressed. Rather than a tokenistic emphasis on the moral responsibility to resist, victory is pursued relentlessly or, in Blanqui’s words, a revolutionary struggles ‘until extinction’ (207). Throughout the various ups and downs and defeats (some of Blanqui’s own making), he never let temporary setbacks damage his essential political optimism in the victory of communism. As Hallward notes, this is certainly a lesson for today’s radicals who have grown up in a relatively long period of defeat. This optimism is not based on a fatalistic emphasis on the progress of economic forces or the march of history, but is instead based on Blanqui’s essential belief that proletarian and peasant agency can change the world if organised. He rejected Comte’s positivism, seeing its belief in automatic progress as support for the status quo.

Le Goff describes Blanqui as an example of someone who emphasised the ‘primacy of the political’, a concept popularised by Bensaid’s analysis of Lenin. Blanqui sees the political level as determinate. Beyond focussing on the ‘interests’ of the proletarian and peasantry, he sees these classes as fighting for higher ideals contrasted to a narrow focus on economic improvement. In fact, Blanqui consistently highlights the importance of education in achieving communism and ideas in general for initiating struggle, going as far as to say ‘revolutions take place in the mind before they take place in the streets’ (123).

The rejection of various forms of determinism in Blanqui’s work leads to a specific conception of violation, that is, a politics based on the ‘actors own deliberation and resolve’ to freely and consciously undertake action (xxii). Hallward emphasises that a new focus on volition would represent a break from a ‘long spell of anti-voluntarism’ (Ibid) that unites diverse figures in European philosophy such as Heidegger, Adorno, Foucault, Deleuze and Agamben. A return to themes of consciousness and intention would certainly counter the objectivist forms of radical thought today, many examples of which are based on technological determinism rather than any conception of revolutionary strategy.

When Blanqui is discussed at all he is usually described as a consistently undemocratic figure, not moving much beyond Babeuf’s conspiracy of equals from which he took inspiration. The smoking gun seems to be his insistence, in the article ‘Communism, the Future of Society’, that calling for universal suffrage during the 1848 revolutions was a mistake, ‘to request a vote from these enslaved populations was simply to request one from their masters’ (261). Instead he proposed a one-year dictatorship to be based in Paris to educate the workers and peasants in the ideals of communism. We need to know what we are criticising and there is nothing wrong with opposing a bourgeois election, as Lenin and Luxemburg (among others) have done, if there is a viable and superior democratic body to replace it. The problem does not stem from the cell structure of Blanqui’s conspiratorial groups, which is a necessity in certain circumstances. He developed an idea of an open society with a press when the opportunity provided itself in 1848. Similarly, he did oppose premature attempts to establish communism ‘within a resistant milieu’ (264). Blanqui’s founding of the Central Republican Club during the 1848 revolution and the resulting federation that attracted 300 workers organisations is completely ignored by most of his modern critics. His focus on the technical aspects of revolutionary class struggle show that his organisations were willing to help lead and coordinate combat, something that is often missing in today’s protest movements that too often die out after registering disapproval with a government or policy.

Rather, the mistake of calling for a dictatorship, as Le Goff points out, stems from Blanqui’s extreme polarisation between the workers and peasants being either ignorant or enlightened. If they are ignorant, in Blanqui’s eyes, they are not ready to rule society; a more sophisticated account of consciousness would be necessary to avoid these undemocratic pitfalls.

Blanqui was jailed the night before the Paris Commune was established, a body that could have benefitted from his decisiveness in relation to its enemies. Regardless, many of those who were elected to lead the Commune were supporters of Blanqui and no contradiction was seen between this and them participating in one of history’s most democratic bodies. In fact, he was elected in his absence to the Communal Council and was proposed to be its symbolic president.

Of course, not all of Blanqui’s politics translate to contemporary circumstances. For example, his militant atheism related to a period of elite rule through the institution of the Catholic Church in France. Today’s official laïcité (secularism) is more often than not used against the oppressed of the suburbs, rather than against the ruling class; Lenin’s defence of Christian minorities and Muslims under Tsarism provides a more useful practice. Similarly, Blanqui’s nationalism relates to a period when France was still seen as the vanguard of progress due to its Republican values and militant working class. Even then, his occasional chauvinistic comments about Prussians and his calls to suspend class struggle during the war with Prussia confused his supporters.

Blanqui’s career sat between the period in which bourgeois radicalism was progressively replaced with a politics based on the working class – Le Goff characterises him as a ‘Neo-Jacobin Communist’ (xxvi). With time, Blanqui did reject the Jacobins as a pseudo-radical force, favouring the far left conduct of the Herbertists during the French Revolution. That being said, Blanqui never forgot the Jacobin model of the Committee for Public Safety and its pursuit of reactionary enemies of the revolution. Blanqui made temporary alliances with Marx and Engels (for example, distributing their work against mutual opponents), however the communism of Blanqui and the communism of Marx and Engels remained ideologically distinct. Against the utopian socialist ideas of Owen, Fourier, Saint-Simon and the ‘toothless mutualism of Proudhon’ (xxv), Blanqui nevertheless argued the case for class struggle.

There are two versions of class struggle, a reformist and a revolutionary one. Tony Benn’s celebrated statement that ‘there is no final victory or final defeat, there is just the same battle. To be fought over and over again’ – or more classically Bernstein’s comment that the ‘movement is everything’ – are each, it can be said, reformist ways of pursuing class struggle, an eternal shifting and balancing of opposing forces. Blanqui, on the other hand, stands out, in his pursuit of revolutionary class struggle, for portraying the conflicting interests of social classes as resulting in a life or death war (or civil war). Victory is pursued unremittingly. One of his enemies said of Blanqui that ‘his name was an axe’. As we emerge from the apologetic socialism of Corbynism. The Blanqui Reader highlights that being labelled a ‘Blanquist’ might not be such a bad thing after all.