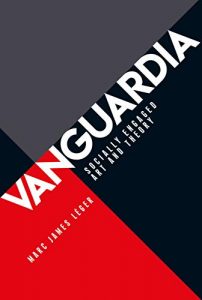 Is art fit for war? To lead an army? Asked by the publisher, ‘[h]ow would you like someone who has read your book to sum it up in one sentence?’, the author replied: ‘Militant research in contemporary radical art and politics’. It is ‘a work in leftist militancy’, of ‘militant cultural research’ (2). More specifically, Vanguardia addresses how socially engaged art must not only engage with contemporary political issues but must also challenge capitalist social relations themselves. ‘Vanguardia makes the case for a renewed avant-garde’ (Ibid). And it does so, in broad terms, by sounding out ‘the possibilities for the rethinking of an avant-garde programme in relation to today’s anti-capitalist social forces’ (24).

This sounding takes various forms. Léger has ‘made use’ of and introduces Lacan’s ‘theories’ and ‘method’; in particular, the ‘sinthome’ and a ‘sinthomeopathic’ approach (7). There is also a ‘brief history of Occupy Wall Street’ (chapter 2), which is described as ‘a vanguard manifestation’ (67). This leads to the claim of chapter 3, ‘Vanguardia’, that ‘the new forms of art activism […] bear a striking resemblance to avant-garde predecessors’ (68). The claim consists of a compilation of book reviews of theorists concerned with art activism. And under the heading ‘One more effort, comrades’, Léger offers ‘a thought experiment into what might cultural revolution and avant-garde art mean today’ with ‘some reflections on the January 2015 meeting of Artist Organisations International (AOI)’ (169).

Such a variegated work can be reviewed in many ways. Let us however focus on the credibility of Léger’s proposed ‘basic operative principle’ of SEA (socially engaged art), ‘that art can be used to bring about progressive social change’ (164). There are common terms and concepts used in that regard, ones that Léger also uses or to which he alludes: the avant-garde, the autonomy of art, propaganda, authentic creativity, aesthetic education. In all this, it’s useful to have in mind a fundamental distinction between the political aims of particular artworks and the idea that art itself is an activity that achieves political goals. At first sight at least, Léger’s claim for art falls in the former category, about the expedient use of artworks for political ends.

Whether an avant-garde art movement can achieve progressive political goals is a familiar and moot point. Léger briefly notes Peter Bürger’s analysis as ‘well-known’ (70). But Bürger’s diagnosis of the failure of the avant-garde to deliver social change requires investigation, especially if a renewed claim for it, like Léger’s, is being made. Bürger defines the intention of the avant-gardiste ‘as the attempt to direct toward the practical the aesthetic experience (which rebels against the praxis of life) that Aestheticism developed’ (Bürger 1984: 34). He also refers to the historical avant-garde, arguing that it was an inter-war phenomenon borne of elements of life that had been expelled from the everyday praxis of life by industrial capitalism. The avant-garde absorbed ‘lost’ creative, aesthetic activities. Art was thus autonomous from the praxis of life and opposed to it. Léger concurs with Bürger that such an avant-garde was simply reintegrated into the culture industries. But he opposes the conclusion that, crudely put, because protest is now accepted as art – the subversive as an accepted role in the artworld – the idea and practice of a socially progressive avant-garde is not viable. In short, Bürger’s analysis demands a case for art’s essential autonomy for avant-gardism, a ‘vanguardia’, to be feasible.

Léger notes from the start such problems for socially engaged art. The whole topic involves ‘a thousand contradictions’ (1). Not least of all because ‘social aesthetics are embedded in neoliberalism’s precaritisation of life and labour’ (Ibid). Socially engaged art is easily co-opted through grants and patronage, for example. At best, it is presently ‘at a biopolitical stage of activism, protest, multiculturalism and lifestyle’, but not yet ‘beyond capitalism’ (70). How does it get ‘beyond’, be sufficiently autonomous to be a genuine force for social change?

John Roberts connects communist utopian ‘enclave theory’ to Nicolas Bourriaud’s ‘relational aesthetics’. He notes how the enclave of autonomous art comprises ‘spaces of autonomous cultural resistance’ that relate to ‘new forms of sociability and criticality in contemporary art’ (Roberts 2009: 353). Art’s autonomy and progressive politics is conceived primarily in terms of aesthetic lives. The idea has a history. Jerrold Seigel, for example, in analyzing the transition from bohemianism to avant-garde modernism, notes their shared fundamental features. These are attaching and prioritizing political virtue to aesthetic work and living over the art product. Seigel thinks that, even if not politically motivated, this aesthetic, based on ways of life and the practice of art making, is necessarily confrontational, transforming artistic practices and challenging other ways of being (Seigel 1999). Similarly, in the twenty-first century, Social Practice Art is described by Anne Pasternak as creating ‘forms of living that activate communities and advance public awareness of pressing social issues’ (Pasternak 2012: 7). Such emphasis on not only artistic lives but also on a wider participation with audiences harks back to Brecht’s learning-plays. In a Lehrstück or learning-play, audiences are forced to engage critically and be part of a work’s whole performance, rather than be encouraged to respond emotionally as a separate ‘mob’. As with the idea of relational aesthetics, the artwork corresponds to ways of living and creates participatory audiences. In so doing, it is supposed that this enclave of progressive art does not produce alternative ways of seeing but actual works of live communism.

But can an ‘enclave’, even conceived in progressive and relational terms, ‘go either way’? Raymond Williams’s conclusion that avant-garde’s politics can ‘go either way’ seems equally to apply to relational art. What is to stop the enclave artist from effectively controlling her audience with her ideas rather than encouraging participatory involvement in generating a work? Williams’s concerns for an avant-garde that involve the danger of ‘cultural Darwinism’ still seem to apply. The danger is that the ‘strong and daring radical spirits’ of any enclave will falsely, necessarily, assert that their art is the only ‘true creativity’ and other forms will be condemned as ‘weak’ (Williams 1989: 50). Léger concludes that ‘the avant-garde’s end of art and end of politics provides the conceptualization of a universality beyond today’s biocapitalism. No solidarity without autonomy. No autonomy without solidarity’ (213). He also raises the prospect of a ‘cultural revolution’ (169). Perhaps it is that kind of language that concerned Williams.

If there are reasonable grounds for skepticism about avant-garde art and politics, then we can still think about politically progressive art in two ways. First, there are individual works of authentic political creativity. George Orwell gives the example of Jonathan Swift’s literary politics and argues that Gulliver’s Travels is a great work of political art, rather than mere propaganda, because of Swift’s own intensity of vision. Second, there is a conception of socially engaged art that draws primarily on the transformative power of aesthetic interest and experience rather than on artworks themselves. For example, when Herbert Read rallied ‘To Hell With Culture’, it was a call for aesthetic lives, a true ‘communism of the senses’ across ways of working and living; a new democratic order in which cultural production was not merely ‘sauce’ but had been transformed to new, aesthetic ways of working at large. But Léger rejects such ‘anarchist horizontalism’, as both theory and organization, for vanguardism (15). Perhaps the original Bauhaus objective allays the concern that encouraging a wide base of aesthetic interests throughout society is simply ‘anarchical’. It states that by creating an extended notion of art and its practices ‘the new structure of the future […] will one day rise toward heaven from the hands of a million workers’. Bauhaus aimed to ‘form a community of leading and future artist-craftsmen’ (Gropius 2012: 15). Perhaps something like it is a vanguard. But its method is aesthetic education, its pedagogy that of artist-teachers, like Paul Klee.

To make art fit for war, a ‘vanguardia’, is to train it in the guiles of propaganda. So, art becomes magic; or it becomes an event like the 2015 Artist Organisations International that Léger discusses in terms of its themes, panels, moderators and minutes (171). But art proper is neither armed nor bureaucratic and Léger’s socially engaged art is not ‘the only game in town’ (179). The vanguard, if it is that at all, is everyone who works artfully. Their good work, borne of aesthetic interest and evident in fine forms of production, serves as a model for every worker. This isn’t the Aestheticism that Bürger associates with the historical avant-garde. It is one associated with a left primarily concerned with art and production, one that aims to change all working practices. This concern has generated a variety of theories and practices, seemingly as distanced as William Morris, Boris Arvatov and ‘communism of the senses’. But, in all, art’s progressive social value is essentially understood in terms of a general aesthetics of good work rather than as a function of a militant avant-garde of artists.