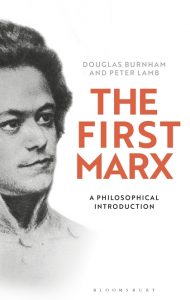 Magnus Møller Ziegler is a Ph.D. Fellow at the Department of Philosophy and the History of Ideas, …

Since Marx’s early manuscripts were first published in the 1930s, it has been a common trope within Marxist discourse to distinguish between a ‘young’ and an ‘old’ Marx, though it has varied greatly to which extent the two were perceived as incompatible. As Douglas Burnham and Peter Lamb notice in The First Marx, discussions for or against ‘continuity’ have been ongoing (9, 11 ff.). The authors do not aim to settle these disputes, but rather to suspend them. They are, as they say, not interested in the ‘young’ Marx – as this implies a comparison in contrast to an older or ‘mature’ Marx – but in the first Marx, i.e. the first theory that Marx developed (9). Whether or not this first theory was later dislodged by another is thus not important for the book’s investigation.

Having set themselves this laudable goal, the authors set out to investigate a set of texts from Marx’s hand spanning from his doctoral dissertation (1840) up to and including the so-called ‘German Ideology’ manuscripts (1845/46), though both of these as well as texts such as ‘On the Jewish Question’ (1843/44) and The Holy Family (1845) often end up serving more as secondary sources for an analysis of the 1844 Paris manuscripts, to which the authors keep returning. The texts are investigated on their own merits and under the assumption that a ‘self-contained, coherent, plausible and indeed fertile’ political philosophy can be re-constructed from them (2, 185-6). This critical engagement is organised around five central concepts: production, alienation, exploitation, change and emancipation. A chapter is devoted to each, enclosed by a substantive introduction and conclusion.

Unfortunately, what is indeed an interesting ambition is hampered at the outset by the book being laden with errors: misspelled and missing words, jumbled sentences and mixed up references as well as factual errors, some quite glaring. To give just one example of the latter: the authors claim that in 1841, Arnold Ruge was considering moving the Hallische Jahrbücher away from Berlin (21). However, as the name quite obviously suggests, they were not produced in Berlin but in the South German city of Halle (and printed in Leipzig). In fact, in 1842, Ruge considered moving the publication to Berlin (Hundt 2010, 29)!

With this being said, the authors present a serious and often well-argued analysis of the political philosophy of the young Marx. The book’s argument follows its structure (or vice versa). In the first chapter on production, the authors argue that in Marx’s view, as humans produce their lives they also produce themselves (49). What this means is that human nature is, to a certain extent, malleable; when we produce and reproduce our lives, we at the same time inevitably produce what it means to be human – our ‘species-essence’. This, however, also makes alienated being possible. When humans produce in an alienated way, they simultaneously produce themselves as alienated, meaning that humans produce themselves in a deficient, ‘not fully human’ way (67) that makes human flourishing impossible. This leads to a state of exploitation, a concept which the authors – following Jo Wolff – understand in a multifaceted way that includes both direct, economic and crucially also systemic variants. This discussion of the systemic meaning of exploitation in the young Marx (113 ff.) is one of the particular strengths of the book.

The untenable system of exploitation and alienation pushes those who recognise it to attempt to break free. In other words, they seek change. Anchoring it in a wider discussion of Marx’s materialism especially in the doctoral dissertation (125 ff.), the authors show how these broad metaphysical discussions of change can be linked to social change – this discussion is another one of the book’s strong points. By changing the circumstances under which they reproduce their lives, humans become emancipated and can finally achieve collective as well as individual – the two are co-dependent – flourishing. Emancipation thus is the streak running through the entire philosophy of the young Marx, the authors claim (185 f.).

Finally, the conclusion offers a précis of what the authors take to be the held beliefs of their ‘first Marx’, a comparison of this to the existentialist philosophy of Jean-Paul Sartre (the purpose of which eludes this reviewer) and finally, a moderately successful attempt at applying the political philosophy of the first Marx to our modern conditions, mainly global consumerism and climate change. Over the course of this wider argument, the authors present many interesting analyses of key concepts and passages from Marx’s texts, and they do so in a way that is always very readable and clearly argued. However, there are also two major structural problems with the book.

The first problem is that it relies entirely on the outdated English editions of Lawrence & Wishart’s Marx/Engels Collected Works. This is, in and of itself, not a huge problem. However, when one’s errand is a close reading of a text corpus consisting almost exclusively of drafts, manuscripts, notebooks, fragments and other unpublished material, the choice not to utilise the scholarly critical editions (the MEGA) is baffling and seems misguided at best. It also creates unnecessary problems for the authors. For example, in the introduction they encourage us to make note of the exact phrasing of Marx’s famous eleventh thesis on Feuerbach and then proceed to provide a short analysis of said phrasing. However, the MECW version that they quote is a translation of Engels’s 1888 version in which the wording has been changed, adding an all-important ‘however’ (aber) and creating a disjunction between the two clauses.

Similarly, the authors rely heavily on the so-called ‘German Ideology’ manuscripts, but apart from a few cursory mentions (3, 60) they do not in any way consider the problematic status of these manuscripts which has been so richly documented in recent scholarship (see most notably Blank & Carver 2014, esp. chs. 1-3). Rather, they again quote and cite the heavily edited MECW edition of these texts as if they represented definitive authorial intent. A similar example is a parenthetical discussion by the authors of the term ‘praxis’ (145) in which they claim that it simply means the same as ‘practice’ and cite the MECW translation as evidence for this – thus missing that by using praxis Marx, like the other Young Hegelians, seeks to denote precisely the marrying of theory and practice that the authors are discussing (Lobkowicz 1967, pts. 2 and 3).

This lack of historical care translates into a second, larger problem, namely that of situating the young or ‘first’ Marx in his intellectual environment. The authors signal an attempt to do this in the introduction, but the section so-titled (20-27) is a train wreck of factual errors, misunderstandings and long outdated conceptions of the Young Hegelians and their relation to Marx. Further, and to the detriment of their analysis, the authors fail to engage with the substantial literature that has appeared on this topic over the past 25 years – not least, they do not engage with anything coming from outside the Anglophone sphere.

Instead, throughout the book the authors repeat a trope that has already been repeated ad nauseam in the literature of the previous century, most notably in Louis Althusser, which is to equate Young Hegelianism as such with Feuerbach. In turn, the authors completely ignore figures like Bruno Bauer and Arnold Ruge, except for cursory mentions. This leads to the comical situation of them discussing in depth a direct reply by Marx to Ruge without mentioning his name (145), and discussing Marx’s doctoral dissertation in even greater detail without mentioning that it was supervised by Bauer and that the concept of ‘self-consciousness’ which permeates it (and which the authors stress) was the central one of Bauer’s philosophy, to which Marx subscribed at least partially the time (Rosen 1977: 148-61). Other Young Hegelians suffer similar or worse fates. Moses Hess is treated more substantively, but in a way ridden with errors (86 ff.). Max Stirner, on whose philosophy Marx expended more pages than he himself ever published, is dismissed in half a page by the authors as ‘clearly something of an intellectual lightweight’ (84).

This absence leaves an interpretational gap, which the authors then attempt to stuff with Feuerbach. They speculate for example that Marx is already anticipating Feuerbach in the doctoral dissertation (128). By doing this, the authors are transposing the Marx of 1844 back onto the Marx of 1840; they are ignoring that during this period he changed his mind often and rapidly with the waxing and waning of precisely the Young Hegelian movement. In 1840, he was a rigorous republican with Bauer; in 1843, he was a radical liberal with Ruge; in 1844, he was a Feuerbachian communist with Hess. At no point in this period was he just one thing, and reducing his standpoint to Feuerbachian Hegelianism by reducing Young Hegelianism as such to Feuerbach is as absurd and historically dubious as reducing Bolshevism to Lenin. It was a complex and complicated intellectual movement with many parties and actors with whom Marx sided at various points and on various issues until finally he carved out a position for himself.