Marx & Philosophy Review of BooksReviews‘Spinoza: Then and Now’ by Antonio Negri reviewed by Steph Marston 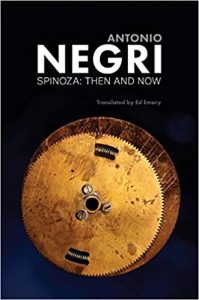 Antonio Negri
Spinoza: Then and Now

Antonio Negri is known as an activist-philosopher – one whose writings display the philosophical rigour of the academy while at the same time engaging critically and disruptively with the realities of current political expression and struggle. His history in the Autonomia movement of the 1960s and 1970s and his (philosophically productive) political imprisonment stamp his work with authenticity and credibility. The series of popular political works he has co-authored with Michael Hardt, from Empire (2000) to Assembly (2017) have arguably shaped a generation’s thinking about what political action looks like and what kinds of interventions make a difference. Alongside these more famous writings, however, Negri has continued to produce scholarly and always challenging reflections on the philosopher whose work has most influenced his own: Spinoza.

Baruch (or Benedict de) Spinoza lived in the Netherlands in the seventeenth century, a time and place of significant political upheaval. The wealthy United Provinces, along with the dominant economic presence of the Dutch East India Company (V.O.C.) in the Far East, were a tempting prize for the imperial powers of Spain and France, both of which continually threatened not only the autonomy but also the republican government of its constituent states. Meanwhile, the internal politics of the United Provinces were also turbulent, with struggles among political, religious and indeed philosophical factions manifested both in institutions and on the streets. This was the context in which Spinoza wrote his political works, a Tractatus Theologico-Politicus and a Tractatus Politicus, as well as his great philosophical achievement Ethics. While historians of philosophy in the Anglophone world have often read Spinoza’s works primarily through a metaphysical-ethical lens, viewing his political writings at best a mere coda to his system of thought and sometimes as inconsistent with it, Negri (along with other luminaries of European philosophy such as Gilles Deleuze, Pierre Macherey and Etienne Balibar) has always been clear that the political is at the heart of Spinoza’s philosophy, its principal concern and its ultimate expression.

This volume is the fourth in Negri’s series of philosophical and exegetical treatments of Spinoza. Here Negri offers reflections which engage systematically and seriously with key themes in Spinoza’s writings, showing how these may be put to use in understanding and transforming the political scene of our own times. Relative to the collaborations with Hardt, these works demonstrate a shift in emphasis towards Negri’s philosophical considerations, while never failing to draw out the political implications of Spinoza’s work for his times and for our own. In L’anomalia selvaggia (The Savage Anomaly, published in English in 1991) Negri first proposed his thesis of a political continuity running from Machiavelli through Spinoza to Marx. In Spinoza Sovversivo (Subversive Spinoza, 2004) he demonstrated the Spinozistic inspiration for his analysis of the political dynamic of the modern state in terms of constituent power. In Spinoza et Nous (Spinoza for Our Time, 2013) he emphasised themes of immanence and affect to show how Spinoza’s philosophy bears on recent trends in both political philosophy and sociology. This new publication, Spinoza Then and Now, sees Negri revisiting Spinozist themes and influences present in the politics of 1968, interrogating a range of politically important concepts within Spinoza’s work, and explicating the historical assumptions and analysis which has informed both his reading of Spinoza and his own political works since the 1960s and 1970s.

This means that there is something in this volume for any reader of Negri. Those wondering how the systematic metaphysics and theological-political of a reputedly solitary seventeenth-century Dutch philosopher of Portuguese and Sephardic heritage can bear on real-world political questions centuries later need look no further than Negri’s evocation of the Spinozism (whether declared or manifest). A Spinozism present in both the workerist politics of Italian operaismo and among the intellectual soixante-huitards of France. For those interested in the influences on and evolution of Negri’s own thought, the previously untranslated pieces in the final part will prove a rich source of philosophical insight, especially the essays on Hegel (Chapter 12, ‘Re-reading Hegel, the philosopher of right’, and Chapter 13, ‘Problems of the historiography of the modern state’), which reveal the methodological origins of Negri’s distinctive concept of absolute democracy.

For this reader the most compelling content is in Part 2, Spinoza Today, in which Negri turns a forensic exegetical gaze on concepts which are pivotal to Spinoza’s political philosophy, but which often appear to be invoked in problematic, even contrary ways in his own works. Negri does not shy away from the complexities in Spinoza’s philosophy, but rather embraces them in delivering a compelling reading with revolutionary implications for our understanding of political entities and events and our construction of political praxis. If the result sometimes appears to be Negri’s as much as (or more than) Spinoza’s, that is hardly a weakness in the work of a philosopher whose life has been dedicated to showing how intellectual analysis presses the case for radical political action. The point is, as always, to change it.

Chapter 4 re-examines the concept of action in Spinoza’s work, which reads through directly from the metaphysics of the Ethics to the political writings. Negri argues forcefully that Spinoza’s construal of action marks a rupture with his philosophical forebears and contemporaries: the power to act which arises contextually and constitutively, produced in social relations and coexistence, is differentiated from the powers of acting exercised by individuals, whether human beings or states. The chapter builds on Negri’s longstanding (and controversial) differentiation between the uses of the terms potentia and potestas in Spinoza’s political writings to argue for the presence of an ontological dynamic of the social: “In Spinoza the political is not a medium of the social, but is its permanent source and its continuous constitutive rupture…” (39). In this way, Negri refuses acosmic interpretations of Spinoza’s metaphysics, such as those associated with Hegel and with neo-Hegelians today, so as to draw out the true force of the political works.

In Chapter 5 Negri reprises his concept of multitude, showing how it was developed through engagement with Spinoza’s writings, in which an often-remarked tension is present between an apparent celebration of, or praise for, democracy and an equally apparent political absolutism. While Anglophone scholars of Spinoza often characterise this as a conventional feature of emerging political liberalism in the early modern period, Negri construes it instead as an appeal to political authority as deriving from the people, rather than from some legitimising juridical principle. Crucial to this interpretation is the Spinozistic multitude, which Negri describes as “the subject of the collective doing that constitutes democratic absoluteness” (51). Insofar as a multitude is united, it constitutes an absolute; at the same time, a multitude is intrinsically multiple and as such, represents a plurality of powers. In Negri and Hardt’s work, this dual character of multitude is invoked in understanding a political movement as “a community coming into being, an absolute performative” (58).

For left thinkers and activists struggling to assimilate the labour power of the ‘knowledge economy’ to political materialism, at the sociological level as well as the economic (where it needs no special elaboration), Chapter 6, ‘Reflections on the immaterial’ indicates a route to potential resolution through the epistemologies of Spinoza and Marx. For Spinoza, knowledge is always embodied. Negri argues that knowledge is ‘higher’ for Spinoza, not insofar as it purports to transcend the material, but insofar as it orientates a subject to what is common in existence, giving it the means of realising and developing commonality. Similarly, for Negri, Marxian methodology makes use of abstraction in transformational projects towards new realities. Thus the significance of the distinction between material and immaterial labour power is shown for what it is: a conceptual fiction which may be deployed either destructively, through division, or constructively, through shared action. While one might challenge Negri’s characterisation of the elements of Spinoza’s epistemology on purely textual grounds, he captures its force: that knowledge and its form have profound implications for the kinds of socio-political formations which may be attempted and achieved at different times and places.

Of particular interest in this volume are Negri’s treatments of some of the affects which are of critical importance for Spinoza’s political philosophy. It is shown (in Chapter 9) how Spinoza deploys a psychological concept of fear as a kind of sadness to establish, contra Hobbes, who deploys fear as a political tool inimical to the establishment of civic peace and security. Rather, for Spinoza, “fear is an emotion that politics and a full life in the polis should remove” (109). Negri poignantly evokes how political fear has become normalised in our own times, not only in the modus operandi of overtly repressive regimes but as an intrinsic part of the narratives of globalisation, and how commonality and solidarity are the ways to overcome it. This seems an authentically Spinozistic insight. In the following chapter, discussing hatred in Spinoza’s writing, Negri more controversially argues, despite Spinoza’s unequivocal statement that hatred can never be good, that hatred and specifically class hatred is the crucible in which the capacity for generositas, the only affect which can overcome hatred, is cast. If this sounds dangerously like a flirtation with a politics of building revolutionary consciousness through immiseration, Negri makes it clear that this is not what he derives from Spinoza: rather, he suggest that generositas is realised and realisable only in practices of cooperation such as those which become indispensable in the face of oppression.

In this collection of essays, Negri persuasively argues for the importance and revolutionary (in both political and intellectual terms) nature of Spinoza’s thought: then, in the seventeenth century; then again, in the twentieth; and now in the twenty-first. In his continued commitment to maintaining philosophical activism, Negri enacts a joyful tenacity which is truly Spinozist.