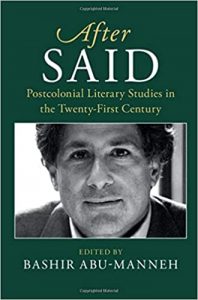 After Said is aimed at mapping the future projections of postcolonial and cultural research based on the given insights and evaluations related to the conceptual and methodological heritage that remained after one of the most influential thinkers of the twentieth century, Edward Said. Edited by Bashir Abu-Manneh, an established author in the field and a Reader in Postcolonial Literature at the University of Kent and Director of the Centre for Postcolonial Studies, the volume brings together contributions of eleven additional authors mostly coming from the field of cultural, literary and postcolonial studies with the few exceptions of sociologists and political scientists. Regardless of the large amount of literature written and inspired by the influential and engaged thinker of Said, most contributors to the volume aim to further elaborate and criticize Said’s work, specifically by bringing some valuable elaborations of his arguments and conceptual apparatuses. Yet After Said is valuable probably even more for pointing into directions towards which future research might take and should take in order for more a progressive and just social order to emerge.

The chapters could be divided into two main thematic subdivisions, the object of which are Said’s literary studies work in the first case, and the his cultural and political writings in the second. In the introductory chapter written by the editor, the biographical and chronological development of Said – exiled Palestinian by origin and later a professor at the Columbia University in the US, from literary critic to well known and established politically engaged activist and commentator on the Palestinian cause after the events of 1967 – is framed under the concept of political humanism. Clearly, important and crucial pillars upon which which Said’s work has been built are marked straight away, colonialism and imperialism, or more precisely, their revival in the context of new forms of national consciousness at the time when emancipatory thinking was on defence (2). The ambivalent and double bind relations of power that characterize the connections between the ‘West and the rest’ occupied this energetic and devoted founder of the postcolonial branch of the most current field of research in the domain of social sciences, humanities and cultural studies. Some of the questions someone might expect to be answered in such a book, and that clearly continue to blow in the wind at the book’s conclusion, are: how to separate harmful from enriching influences within relations between cultures and nations which are unbalanced in power and wealth? Or: is revived cosmopolitanism and humanism idealistically pursued by Said powerful enough to bring any significant change and difference into the problems of domination and subjugation, or at least, to inspire such solutions to global conflict?

Despite a huge respect and admiration obviously shown in dealing with Said’s life achievements and arguments, answers to these questions after reading After Said are not on the whole encouraging. Invoking such problems at the centre of the empire cannot produce much significant change in social and political relations, despite all the efforts. However, before explaining such a dour resolution, let us first examine in short what some of the individual chapters bring to the table. Each chapter is distinctive either for being informative on some of the elements of Said’s life, research and political career, or for trying to push forward the debate on some of the problems Said emphasized, or missed, to develop in a more balanced theoretical advance towards new directions. Most chapters are focused on two of Said’s major contributions that have marked his career and became irreplaceable elements of syllabi in every university in the world: Orientalism and Culture and Imperialism. Seamus Deane concludes fairly in the fourth chapter that much of Said’s writings, observed in the context of scholarly debate, especially on the topic of the relation between politics and aesthetic, appears to have lost a certain philosophical depth and sharpness, which might be the price of his decision to dismantle Marxism rather than seriously engage with its arguments (59). The fifth and sixth chapters deal with the trope of exile and the concept of contrapuntal reading is introduced, a methodological tool for dealing with the representational fallacies of the dominant approach within Western epistemological systems. This methodological tool is, like many other tools of the subaltern approach, a variant of the poststructuralist approach related to Derridean deconstruction or Foucauldian discourse analysis. In the ninth chapter Dougal McNeill critically explicates Said’s stance towards modernism in which, despite a missed elaboration of it in the context of postmodernist movement, valuably concludes that true solidarity and an egalitarian transnational project for contemporary times should simultaneously offer a political platform and analytical research program which provides liaisons between modernist emancipation and the role of capital in an imperial context (161).

The palpable prospects for future engagement in both cultural studies and postcolonial studies, but also of the other disciplines of the social sciences dealing with the domain of culture, is provided by highlighting to problems and fallacies found in Said’s work, which have produced a real obstacle for the development of scholarship after him and under his influence for dealing with decolonial and emancipatory politics. The main course of this trajectory, as it is given in the concluding paragraph of Abu-Manneh’s introduction, has to come to terms with the base-superstructure debate of Marxism. This means taking both capitalism and imperialism seriously and also the forms of typical culture they generate (16).

Firstly, future research has to develop ways of reconciling the nature of inter-cultural domination, injustice and inequalities. The most controversial and essential argument Said made regarding this point was that the intention to dominate is deeply rooted in the culture of advanced Western nations and their approach towards either all the other less wealthy or politically powerful cultures. Yet this not assumed to be a product of concrete historical conjuncture (39). Unbalanced power relations and the tendency to conquer the weak do not only exist among cultures of a ‘superior’ or ‘central’ position within the world order, but are rather features existing and observable within almost every culture and nation of the world (44). Furthermore, future research will necessarily have to pass through what we could call ‘intersectional validation’ to be seriously taken into account, since numerous characteristics of political subjectivity are contribute to the fostering or weakening of political positions. Besides ethnicity and nationality, class, gender and age at least have to also be taken into account. Orientalism, while necessary, is not a sufficient cause of colonialism (45). This is a perspective upheld by the several of the authors, that epistemological objectification, which is culturally biased, cannot be the dominant feature which gave power to the colonizers and nations that politically and physically dominate the global world order, despite its significance.

Furthermore, often it seems that the Israeli/Palestinian conflict overwhelmed Said’s understanding of nationhood and sovereignty to such an extent that it becomes unhelpful for those trying to distinguish between progressive and reactionary forms of anti-colonial resistance to imperialism (136). This is especially important because many aspects of nationalism, which have appeared during the globalizing phase of decolonization, can be quite destructive and in assuming superiority towards many groups within the resistance towards imperial and geopolitical superpowers. In terms of political science, Said’s research is not considered to be either systematic or normative (115). Despite the fact that many critical traditions are juxtaposed and brought together in Said’s work, the ‘golden ratio’ of future critical theory might lie somewhere else, especially in connecting to different cultural, geographical, historical, political, economic and other types of variables; not to mention the fact that engagement with basic scholarly debates should not be overshadowed by any giant critical thinker for the twenty-first century (152).

Many of those weaknesses of Said’s thought clearly come as a consequence of his avoidance to deal with Marxist scholarship, especially with the base-superstructure debate. What has been called culturalization in his approach – giving exaggerated causal significance to factors belonging to culture in scientific explanation – is an obvious underestimation of political economy and materialistic factors. Moreover, often the contradictory character of cultural impact, which was somewhat exposed in the work of the authors of the Western Marxism upon which Said is building, is especially important for the contemporary period of high complexity and seems to be missing in his analyses.

This line of thinking takes us further towards understanding how much all of these developments are important for approaching the topics of exile and migration, which are gaining considerable purchase at present. These dimensions of contemporary social life cannot underestimate any aspect of inequality and the complexity which characterizes its dynamics. Not only the aspects of class and gender in Said’s work, the work of many authors working in the field of cultural and postcolonial studies, who are ignoring the classical Marxist understanding of imperialism and uneven development, fail to connect their analyses and considerations to other subjugated and peripheralized parts of the world. Even in this volume, despite the several times an urge for this path of research to take into account political economy (89, 190), there is no mention in the volume of Eastern Europe and former socialist world and its developmental troubles. With scholarly contributions of Maria Todorova and Madina Tlostanova, many have started to further elaborate how the efforts of postcolonial and postsocialist scholarship might be paired together. Yet it could be considered for a serious omission of After Said not to take this field into any account, not even a single chapter. Also could be noticed is that giant figures such as Edward Said tended to overshadow novice efforts of critical social and humanist scholarship, presenting a real danger for many of any future critical scholarship to continue by being deprived of substantive power to provide strengthened and globally more powerful arguments for political emancipation. These issues should relate not only to aspects of subjugated ethnicities, races and nations, but to all subjugated collectives struggling for recognition and a more dispersed and direct form of global democratic participation in political decision-making.