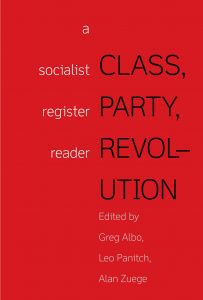 Jade Saab is a Lebanese/Canadian writer based in Scotland. He is working toward a PhD at …

The conquest of power by the proletariat remains the most central question in socialist discourse. Previously thought answered, the Leninist formula for the seizure of power, successfully enacted in 1917, not only proved to be poor guidance for Western Europe, but, some may argue, eventually lead to its own unravelling. As most Marxists sought to confront the ‘degeneration’ of the USSR and make sense of emergent social movements, the question of power as it relates to social movements (class) and the vehicles through which a movement can secure power (party) regained centre stage. It’s exactly this discussion that this collection of twelve essays elaborates on.

With most of the essays written in the late 1960s and early 1970s, they are written in an era still in Lenin’s shadow yet clearly at its edges as the social movements of 1968-9 solidified the failure of Communist Parties in Europe that claimed to embody Lenin’s scientific formula. Lucio Magri, in his ‘The May Events and the Revolution in the West’, opens with a condemnation of the Bolsheviks, saying that, ‘the experiences of May have strikingly demonstrated the worthlessness of this approach’ (43). Yet, although all these essays want to distance themselves from the Bolshevik model, they also implicitly highlight the lack of a fully elaborated alternative.

Andre Gorz, in his 1968 essay on ‘Reform and Revolution’, highlights the importance of a party in unifying the demands of social movements and acting as a spearhead to wrestle concessions from capitalist power structures. He warns, however, of the temptation party leaders may find in parliament, and points out that the antagonisms between classes must always be highlighted as to avoid the institutionalization of demands. The party, thus, must be fully integrated with a mass movement and must ensure the continuous presence of an active mass movement by trying reforms with expanding democratic rights for workers in factories, cooperatives and local councils. This creates a dual relationship where a party ‘is constructed in and through the struggle for plausible objectives corresponding to the experience, needs, and aspirations of the workers’ (21).

Gorz makes it clear that unlike the reforms demanded from Social Democratic parties, a true workers party doesn’t differentiate itself through the degree (extent) of reforms but by seeking ‘an absolute and global improvement’; it’s only then that the ‘socialist movement can establish itself as the hegemonic force in the workers’ movement’ (23-4). Which reforms to push for are to be determined through extensive discussion from within the party as it tries to determine how best to achieve a full transition to socialism. This Gorz calls a ‘labour of ideological research and elaboration’ (33) that must be taken by the class as a whole. August H Nimtz, in his 2017 essay ‘Marx and Engels on the Revolutionary Party’, adds by saying that institutionalization and stratification within the party can be avoided by subordinating parliamentary representatives to the will of the party rank and file at all times (269).

Both Nimtz and Gorz seem to take it for granted that parliamentary involvement is necessary, even with the many warnings they present about its dangers. Furthermore, their discourse implies that the party is the voice of the working class, following a Leninist formula in which the party is a hegemonic force. The dangers of this are highlighted in Ralph Milibands’ 1970 essay ‘Lenin’s State and Revolution’. For Lenin, the dictatorship of the proletariat is carried forward by the revolutionary party and therefore finds itself in unity with the proletarian state. The unity of party and state is reinforced when Lenin ties the dying of the state with the frequency of party congresses held. Miliband points to the inconsistent stances of Lenin who had previously opted for a prefigurative power found not in the party but the soviets. He says that ‘to attribute the inconsistency to the particular Russian conditions that faced the Bolsheviks is insufficient’ (133). Miliband however is not looking at these inconsistencies to prove the inadequacy of Lenin, but rather to make the argument that ‘the exercise of socialist power remains the Achilles’ heel of Marxism’ (125).

Jean-Paul Sartre, in a 1970 interview titled ‘Masses, Spontaneity, Party’, warns against the Bolshevik approach. Sartre claims that positioning the party as the force of a movement means putting it above social movements and limits its relationship to them to rejection or direction (241). The later usually translates into a rejection of the party by the movement itself. Sartre argues that movements such as that of the 1968 movement in France shouldn’t be understood in terms of spontaneity as there is no purely spontaneously action on this level. Instead, Sartre claims we need to see them as the solidification of groups becoming more conscious of themselves and their struggle (239). To avoid the duality of rejection and direction, a party should ensure the growth and autonomy of mass struggles.

This line is also taken by Lucio Magri. Taking a distinctively Luxemburgist approach, the conclusion Magri draws is that ‘a revolutionary front can be constructed, only if an alternative force is already active within the social body’ to illuminate, unify, and construct a political force ‘able to transcend the choice between Jacobinism and anarchism’ (46). As such, Magri only gives a leading role to a party, not a hegemonic one. Magri argues that any reforms gained by a movement need to be structured in a way that sharpens antagonisms in the system so that they may lead to wider crises.

This directly echoes a point raised by John Merrington in his 1968 essay ‘Theory and Practice in Gramsci’s Marxism’. Merrington, building on Gramsci, argues that ‘[a] social group must already become “directing” before the conquest of power’ (181). Therefore, reforms must help ‘develop institutions that would allow the worker to develop his autonomous initiative as a producer’ (180), not as a wage earner. Alastair Davidson, also building on the works of Gramsci in his 1974 essay ‘Gramsci and Lenin 1917-1922’, clams that this means that a party, even if unifying the demands of mass mobilizations, should be seen as educational vessel and an ‘agent’ of a process of revolution taking place on the factory floor (208).

The party as a vessel is one that Monty Johnston, in his 1968 essay ‘Marx and Engels and the Concept of the Party’, argues is congruent with Marx and Engels. Johnston tracks how Marx and Engels’ views on the party changed as the proletarian movement itself grew. Thus, the party for Marx and Engels was not the entity that carried through the will of the proletariat, but rather the terrain on which the proletariat developed. Sectarianism was ‘any attempt to impose preconceived organizational forms on the working class movement from outside’ (69) and the party was simply ‘an organization in which socialist theory fuses with the labour movement’ (80). Rossana Rossanda puts it best in her ‘Class and Party’ (1970) when she says ‘[t]he organization is never considered by Marx as anything but an essentially practical matter, a flexible and changing instrument, an expression of the real subject of the revolution, namely the proletariat’ (222). Thus, the role of the vanguard is not to lead the revolution but to ‘provoke the telescoping of objective conditions with the intolerability of exploitation and a revolutionary explosion’ (227), that is, to agitate.

Hal Draper expands on the importance of this concept in ‘The Principle of Self-Emancipation in Marx and Engels’ (1971) by differentiating between a Leninist model and a more inclusive model. Pointing out that ‘[i]n one pattern, the proletariat carries out its own liberating revolution. In the other, the proletariat is used to carry out a revolution’ (97). Draper goes on to say that the Leninist formula in which state power is captured as an initial step until the eventual graduation of the proletariat and the withering away of the state is inaccurate. Draper agrees with Davidson that ‘[o]nly struggle educates the exploited class’ (217). The role of the party is then to act as a holding space in which the proletariat can educate themselves through struggle and debate.

It is for this reason that democracy within the party is of utmost importance. Democracy is the engine which drives self-criticism and thus the evolution of the workers struggle. Here, Harold Wolpe’s essay, ‘Some Problems Concerning Revolutionary Consciousness’ (1970), develops the importance of agitation in creating the subjective conditions of revolution. Wolpe claims that objective conditions play a much smaller role in bringing about revolutionary change as needs are determined by the economic system itself (148) (echoed also in Sartre’s interview). Thus, a party needs to relate to the current struggles of the proletariat which cannot be something imposed on them from ‘above’.

Here, Wolpe agrees with Magri in saying that aside from advocating for reforms that create the space in which workers find their agency under capitalism, a party also needs to create a vision for the future to answer the question ‘what for?’.

The questions and contradictions raised by all these essays are brought into sharp focus in the final essay of the collection, Leo Panitch and Sam Gindin’s ‘Class, Party, and the Challenge of State Transformation’ (2017). In this essay, Panitch and Gindin use the example of Syriza’s electoral success in Greece who, even with the backing of a popular mass movement, were unable to translate their gains into emboldening working-class autonomy. The radical words in their program remained just that, as the overarching state machinery remained unchanged. Social movements themselves, who propelled Syriza into office, were also unenthusiastic in playing a greater role in reshaping the state (even with support). In a promising note, Panitch and Gindin claim that although class-focused and not class-rooted, social democratic initiatives such as the Sanders, Corbyn and Syriza campaigns open the space in which class rooted politics can take shape (284).

The task undertaken by Class, Party and Revolution is a gargantuan one. And although it provides no clear-cut answers, it leaves the reader with a broader range of questions and warnings to help direct them in their own journey. For all the benefits this collection brings, it could have been improved by integrating some non-European perspectives. The focus on western writers also makes the collection repetitive at times. It’s unclear if this is a limitation within Socialist Register or an editorial choice. The Leninist slant of the collection also means that other revolutionary voices within and without Marxism are absent. Although these are significant limitations, it does not undermine the importance of the collection and the information found within it.