Marx & Philosophy Review of BooksReviews‘Marx on Emancipation and Socialist Goals: Retrieving Marx for the Future’ by Robert X. Ware reviewed by Onur Acaroglu 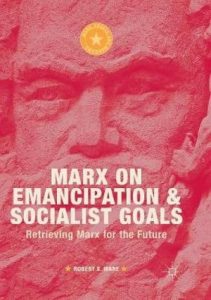 Dr. Onur Acaroglu is a researcher at the Department of Political Science and International Studies, …

Marxology, as a discipline of the thorough interpretation of Marx’s work, can leave one feeling less confident of their grasp of Marxism than before. More often than not, seasoned academics will dominate the field to take up singular phrases in their multiple meanings, leaving other participants to scavenge an interpretation from the morass. That said, everyone involved with leftist theory and practice depends on this scholarship, as erroneous judgments and attributions can take root in its absence. However, it is difficult to avoid a lapse into a metaphysical search for the ‘essence’ of Marx, and more difficult still to communicate findings in intelligible ways to a non-specialist readership. Marx on Emancipation and Socialist Goals provides a strong example of how these pitfalls can be avoided. Ware relies on primary literature without a pretension to uncover the singular truth of Marx’s word. It is a work commendable for the frankness about its biases, because the author’s interpretation is severely weakened by a blanket rejection of dialectics as a viable aspect of Marx’s thought.

Following G.A. Cohen, Ware advocates ‘non-bullshit’ Marxism (48), opting for the milder ‘twaddle’ to describe what is deemed as a non-sensical, outdated fixation on Hegelian-inspired dialectics. Ware seizes on a remark Marx made in an afterword to Capital, saying that while he was settling accounts with Hegel, he nevertheless ‘coquetted’ with his modes of expression, and to some extent, his dialectic (39). For Ware then, when the mature Marx sprinkled some ‘contradictions’ and ‘crises’ in his critique of political economy, this was a slip into his youthful flirtation with Hegelian ideas (42). However, as Marx himself would not have objected, this approach is not impervious to obsolescence, and a lucid generation of analytical Marxists have indeed dispensed with this ‘bullshit’ for good. Thus, Ware concludes that Marx turned away definitely from Hegel and towards ‘scientific [theories] about real phenomena’ (57).

Much can be said about the dialectical method and the novelties Marx brought to it, containing and surpassing Hegel’s system by stepping into the worlds of political economy and productive activity. It is perhaps more helpful to point to the actual meaning of the term. Combining the Greek words dia and logos, dialectics refers to a method of reasoning by splitting into two (Nicolaus 1973: 37). This helps to make sense of co-constitutions between dualities, triads, or more, revealing the internal connections between concepts and their real counterparts. So, rather than occasionally falling back on a Hegelian vocabulary, the structure of Capital is a dialectical process in action. Beginning with the commodity, Marx traces the processes through which this form is attained from use and exchange values, which in turn give shape to chapters on money, capital, and labour-power. Crucially, the beginning point is not a constant in the real flow of social relations, yet has to be presented as such for sake of analytic clarity. Beginning from a fixed point and pulling along the connecting threads, Marx paints a picture of a dynamic system whose components gain colouring through their relations with the whole. Marx thereby reasons by splitting a seemingly monolithic category, the capitalist mode of production, into two and more parts, taking these up within the totality of their interrelations. Having earlier written that ‘one must force the frozen circumstances to dance by singing to them their own melody’ (1967: 253), an older Marx demonstrates just that.

Ware approvingly quotes Marx’s quip that ‘iron is a label by which the true believers recognise one another’ (25), and builds on this to jettison the esoteric, dialectical approaches associated with historical materialism. Conceptions of iron laws of human society have indeed been detrimental to leftist projects, which intrinsically aim at transformation. The obvious example here is belief in a rigid ‘human nature’, a term which might make any socialist shudder as it persistently resurfaces despite all reasoned refutations. A less obvious example comes from Hegelian teleology, or the understanding of history as a progression of human freedom gaining consciousness of itself. For Hegel, history comes to a resolution sooner or later with the civic freedom of the modern state. For left Hegelians, this will occur rather later, and as a radically altered society. Nevertheless, the underlying belief that history has a final purpose can lead to an unwarranted optimism that it will work itself out. Marx, on the other hand, strives to break from this necessitarianism, using the conceptual apparatus of dialectics to shed light on the material bases of social reproduction. This contextualisation of his statement carries more water as a vindication of dialectics than its rejection, since it implicates a resistance against formal, ahistorical logics in favour of a dynamic epistemology.

In Marx’s day, the intellectual atmosphere was dominated by a thoroughly philosophical left-Hegelianism. However, Marx changed elements and turned to political economy with inspiration from Engels. This enabled a break from historical necessity, as Marx mapped history as a messy and open process of social struggles, taking place in the fields and factories as much, if not much more, than in courts and parliaments. This dramatically democratises historical agencies. Marx thereby radicalised the Hegelian dialectic beyond purely speculative and latently elitist confines. Dialectics are placed at the centre of history as a constantly negotiated articulation. Accordingly, the theorisation of lived social relations must rebuild its conceptual tools in light of its contemporary developments, in order to dialectically return with a sharpened outlook on society. This theoretical and methodological open-mindedness is more cogent than the blanket rejection of dialectics that Ware calls for, because it takes shape precisely as a result of it. To use the earlier metaphor, Marx sings the Hegelian dialectic its own melody, reveals its inconsistencies, and sets out a new benchmark of inquiry based on productive activity, a universal and historically specific attribute of social reproduction in human societies.

Restoring dialectics to Ware’s otherwise imaginative reconstruction of Marx also helps to shed light on the issues raised in his book. According to Ware, Marx was less interested in the cognitive-epistemological implications of ‘class consciousness’, a term he never even directly used (103). When Marx does refer to the class-for-itself, Ware continues, this was in reference to issues of organisation and community. Matters of knowledge, on the other hand, were the domain of Engels (103-4). However, compartmentalising class politics this way imputes a separation of intellectual and manual labour, analogous to consciousness and organisation, to the strategic approaches of the founders of historical materialism. Marx identified the historical roots of alienation and class societies precisely in this fracture, and stated that the path to a classless society involves overcoming it. As Ware also highlights throughout his book, Marx’s goal was the self-emancipation of the working class, particularly from the yoke of the capitalist division of labour. It would thus be bizarre, if not outright hypocritical, if Marx had then analysed working class movements solely through the lens of practical organisation, leaving cognitive matters aside.

Fortunately, this is not the case. To reiterate, Marx believed, as Ware notes and all leftists must remember, that a rupture must be the self-emancipatory work of the masses for whom the means to a living is the sale of labour-power. Class position facilitates a grasp of the contradictions of the system. When wealth accumulates at one end while misery reigns among the majority, this process is directly intelligible to the working class who experience it at the frontlines of social reproduction (all the more starkly in times of Covid-19). The epistemological upshot of this line of thought is that neither abstract speculation, nor uncritical action, are conducive to praxis, theoretically-informed activity which also motivated Marx’s departure from Hegelianism into political economy. This term never appears in Ware’s book, hindering his account of Marx’s approach to working-class subjectivity.

In a chapter on the potential paths of socialism, Ware astutely discusses the thorny question of ‘human nature’ in relation to political strategy and social potentials. This section actually shows that Ware also thinks in dialectical terms. He reasons by splitting into two, taking up the run of the mill imputations of ‘selfishness’ as an argument against socialism, along with the simplistic (and mainly libertarian socialist or orthodox anarchist) insistence on the intrinsic altruism and cooperation of humankind. Ware contrasts these positions to argue that humans carry both of these traits, and that at times (exemplified by the current proliferation of mutual aid networks), self-interest and collective interest can be recognised as mutually reaffirming. This was also the argument that Marx sought to make, in that the individual and society cannot be meaningfully separated as equally crude methodological individualists and collectivists do. Rather, individuality becomes meaningful in the midst of society, and the question is how to organise social relations such that people’s uniqueness can shine through without class predeterminations. On this note, Ware makes the insightful suggestion, ‘it is more likely that society needs to change, than that people do’ (234). Past socialist experiments have at times lost sight of this, and targeted individuals (in mass numbers) for re-education to create ideal types. The processes downplayed the more arduous task of facilitating those existing tendencies in society that gravitate towards free association and mutual aid. In sum, there is such thing as society (which apparently still needs to be said), and it is made up of individuals and groups deciding on their best interest. These categories give meaning to each other in a dialectical sense, also communicated by Ware in the key of a different terminology.

The Marx, Engels, and Marxisms series, published by Palgrave, is an apposite reminder that it is essential to revisit and reinvent the founders of Marxism, as they often grappled with similar issues in their times, and may have a lot to say about the predicaments we face. Marx on Emancipation and Socialist Goals, despite its shortcomings, is an excellent introduction into some of the key theoretical and political controversies that have haunted the global left for the past two centuries. Ware not only succinctly presents contrasting perspectives on Marx scholarship, but also provides refreshingly provocative interventions into otherwise wearisome debates. For this, his book deserves strong praise. On closer inspection, however, the dismissal of dialectics as an unnecessary embellishment falls victim to the fallacy of uncovering the uncontamined kernel mentioned above. Presupposing a useful analytical wheat that can be separated from the useless, dialectical chaff, Ware’s discussions of Marx reduce a lively body of thought, in motion with shifting historical realities, into a formal husk.